Accessibility links
It's Time To Work With Russia, Trump Says, Describing Talks With Putin About Cyber Security : The Two-Way After a long meeting with Russia's leader, President Trump says, "Now it is time to move forward in working constructively with Russia!" 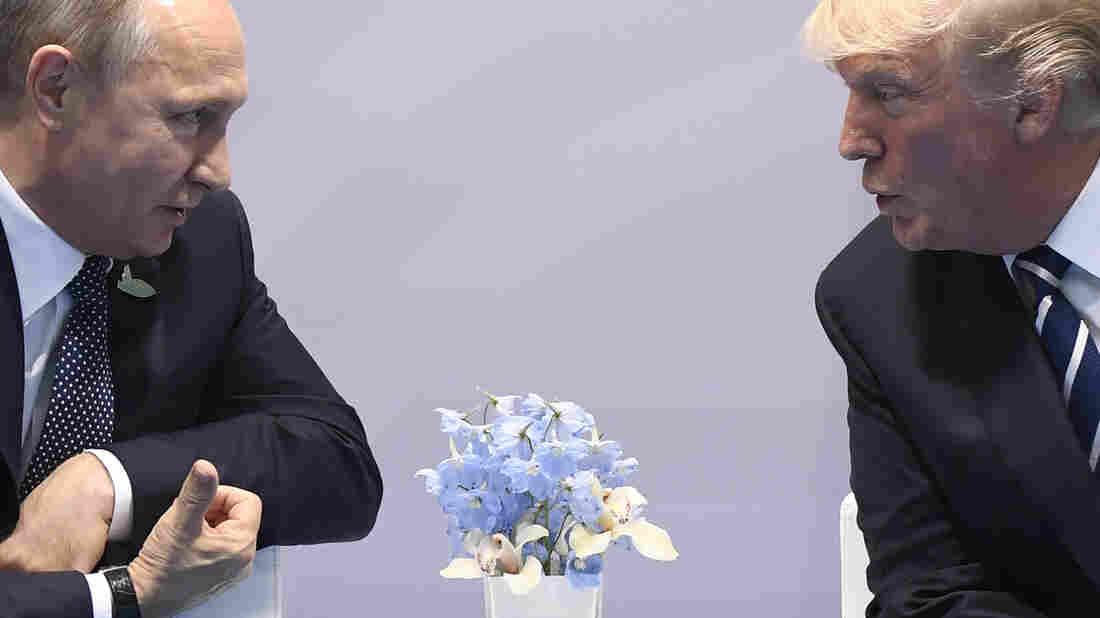 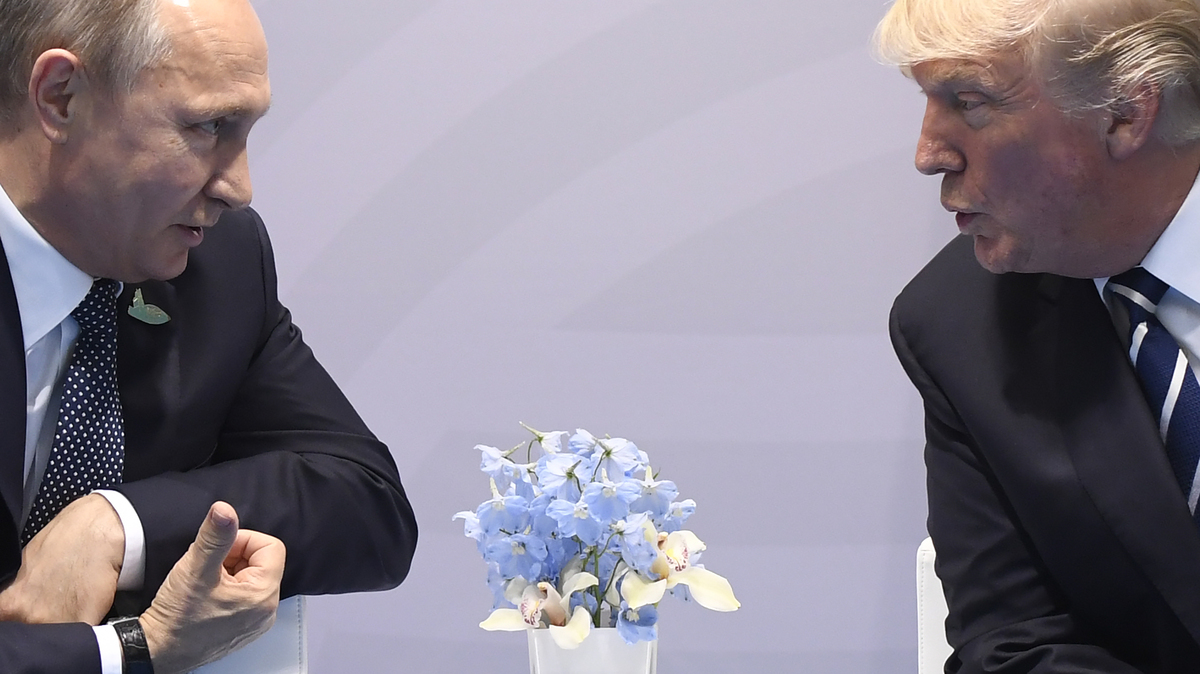 President Donald Trump says he and Russian President Vladimir Putin agreed to form a joint cyber security unit during their talks at the G-20 Summit in Hamburg, Germany.

President Trump says he "strongly pressed" Russian President Vladimir Putin twice about Russia's meddling in the U.S. election — and that it's now time "to move forward in working constructively with Russia."

That work, Trump said, will include a new ceasefire in Syria, as well as a joint cybersecurity operation. But by Sunday evening he distanced himself from the latter, tweeting, "The fact that President Putin and I discussed a Cyber Security unit doesn't mean I think it can happen."

The fact that President Putin and I discussed a Cyber Security unit doesn't mean I think it can happen. It can't-but a ceasefire can,& did!

In a series of tweets Sunday about his meetings with Putin at the G-20 Summit, Trump said Putin "vehemently denied" interfering in the U.S. election.

I strongly pressed President Putin twice about Russian meddling in our election. He vehemently denied it. I've already given my opinion.....

"I've already given my opinion," Trump added, apparently referring to his remarks in Poland shortly before attending the G-20 Summit in Germany. When he was asked about election hacking, Trump replied, "Well, I think it was Russia, and I think it could have been other people in other countries. Could have been a lot of people interfered."

He added, "Nobody really knows for sure."

Putin & I discussed forming an impenetrable Cyber Security unit so that election hacking, & many other negative things, will be guarded..

At that news conference in Warsaw, Trump also noted that "three or four" U.S. intelligence agencies, rather than all of them, say that Russia sought to interfere in the election. And he compared their findings about Russia's involvement to the hunt for weapons of mass destruction in Iraq — making it clear that he remains a skeptic.

Trump's posts on Sunday morning also included digs at the CIA, FBI and the Democratic National Committee, as well as a plan to work with Russia to form a "Cyber Security unit," raising questions about whether America's president agrees with U.S. intelligence agencies' conclusion that Russia carried out hacking to help Trump win the White House.

After Trump touted the plan to collaborate with Russia on Internet security issues, he was criticized by fellow Republicans, including his former rivals for the presidency.

WATCH: Sen. @LindseyGrahamSC responds to Trump's call to work with Russia, saying it's not the dumbest idea "but it's pretty close." #MTP pic.twitter.com/8eK1y7A25a

"It's not the dumbest idea I've ever heard, but it's pretty close," Sen. Lindsey Graham, R-S.C., said on NBC's Meet the Press.

Graham called the meeting with Putin "disastrous," and said that while he sees Trump having success in other foreign policy areas, "when it comes to Russia, he's got a blind spot."

Sen. Marco Rubio, R-Fla., had a similar take, saying that "Partnering with Putin on a 'Cyber Security Unit' is akin to partnering with [Syrian President Bashar] Assad on a 'Chemical Weapons Unit.'"

.@stevenmnuchin1: "Why would President Trump broadcast exactly what he said" in Putin meeting? "Strategically that makes no sense." pic.twitter.com/VNIU2SEqHQ

Treasury Secretary Steve Mnuchin, defended the president, asking on ABC's This Week, "Why would President Trump broadcast exactly what he said" to Putin and adding, "Strategically that makes no sense."

It's the second time in recent days Trump has tweeted about the Russian hacking. On Friday, he wrote from the international talks in Hamburg to say, "Everyone here is talking about why John Podesta refused to give the DNC server to the FBI and the CIA. Disgraceful!"

Responding to that post, Podesta clarified that he had worked for Hillary Clinton's presidential campaign and not the DNC. He also reminded the president of his duties at the G-20 conference and told Trump, "Get a grip, man."

At the Hamburg meetings, Trump and Putin spoke for more than two hours. Afterwards, Putin said he thought Trump had "agreed" with his denials of Russia's involvement in the U.S. presidential campaign.

Secretary of State Rex Tillerson has offered a nuanced take on the two leaders' meeting, saying that while Trump raised the "concerns of the American people regarding Russian interference in the 2016 election" at the very start of his time with Putin, Trump also decided to focus on advancing talks on other issues. Tillerson added that in the meeting, "there was not a lot of re-litigating of the past."

When reporters asked Tillerson about how direct the American president had been in confronting Putin over Russia's interference in the U.S. democratic process — and whether Trump had presented any evidence to try to convince Putin — Tillerson replied:

"The Russians have asked for proof and evidence. I'll leave that to the intelligence community to address the answer to that question. And again, I think the President, at this point, he pressed him and then felt like at this point let's talk about how do we go forward. And I think that was the right place to spend our time, rather than spending a lot of time having a disagreement that everybody knows we have a disagreement."

After Friday's more than two-hour meeting between the two leaders, Tillerson's Russian counterpart, Foreign Minister Sergey Lavrov, implied that the U.S. president might not agree with his agencies' assessment, stating, "Of course, President Trump also mentioned that certain circles in the United States keep on spinning the issue of Russia's interference in the U.S. elections even though they are unable to prove that."

...have it. Fake News said 17 intel agencies when actually 4 (had to apologize). Why did Obama do NOTHING when he had info before election?

Trump didn't dispel that notion today, using the term "fake news" to refer to U.S. media outlets such as the Associated Press and New York Times that have clarified that four U.S. intelligence agencies (including the FBI and CIA) have concurred on Russia's attempt to meddle in America's national vote, rather than all 17 U.S. agencies that were mentioned in early reports.

There are no plans as of yet for another meeting between Trump and Putin, Tillerson said on Friday. He added that the State Department will explore "the cyber issue and this issue of non-interference."

On Sunday, Trump said the cyber collaboration unit would work to prevent election hacking. But that concern wasn't at the top of Lavrov's list earlier in the weekend, when he said the effort would focus on terrorism, organized crime, and problems such as child pornography and "so-called suicide networks," in addition to "hacking in all its forms."