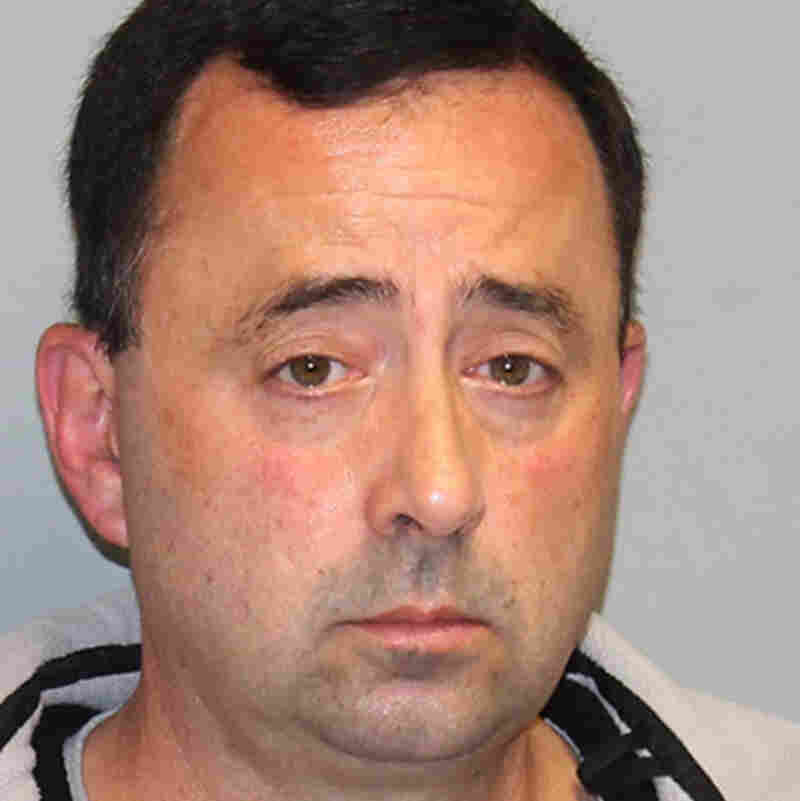 Larry Nassar, a doctor who treated female gymnasts and is accused by many of molesting them, pleaded guilty to child pornography charges on Tuesday. Michigan Attorney General's Office/AP hide caption 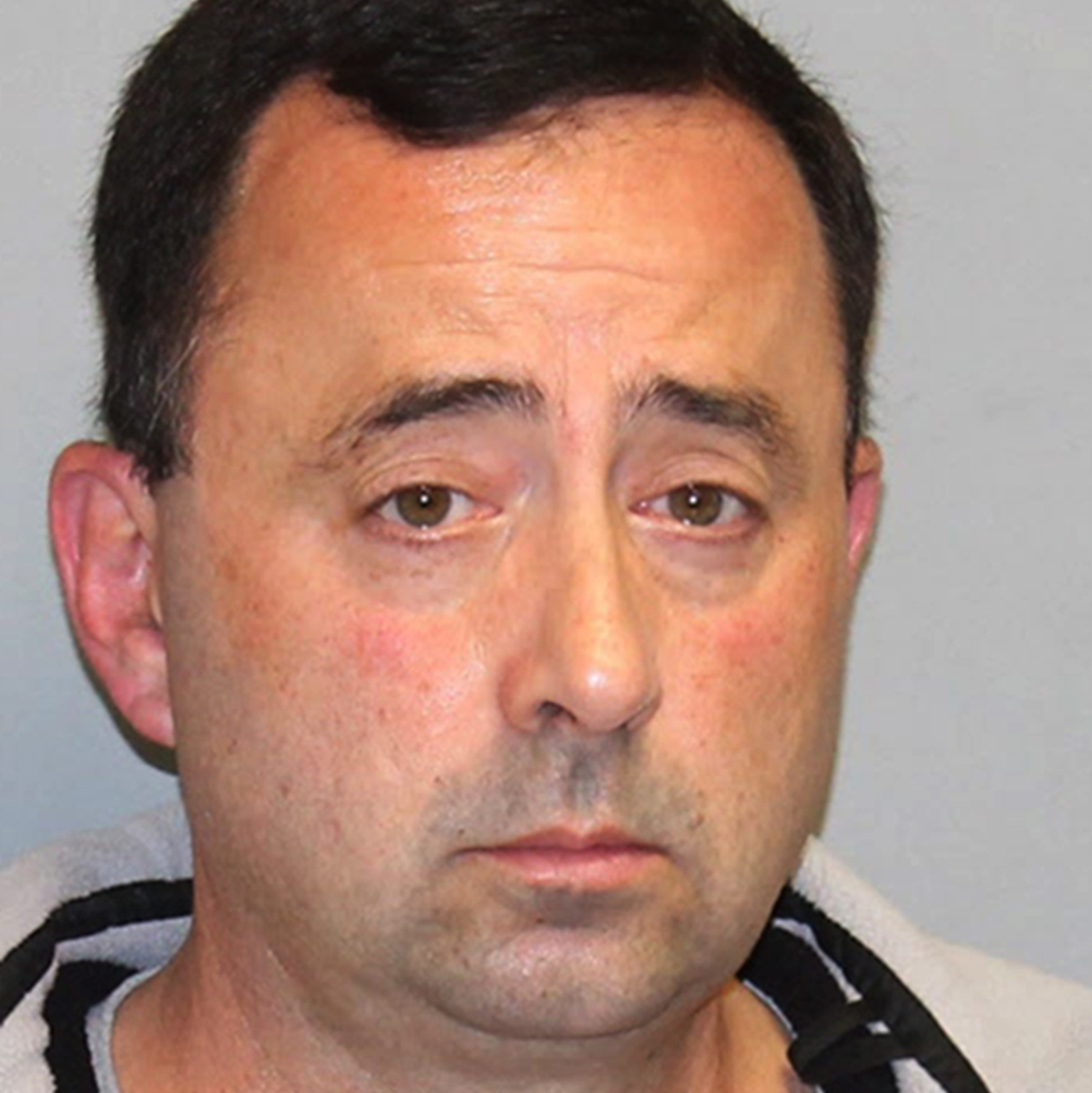 Larry Nassar, a doctor who treated female gymnasts and is accused by many of molesting them, pleaded guilty to child pornography charges on Tuesday.

It's the first time Nassar has admitted guilt in the case. In return for his admission of guilt, the plea bargain says prosecutors won't pursue federal charges alleging sexual abuse of four young women.

The U.S. attorney's office announced that Nassar will be sentenced on Nov. 27 in federal court in Grand Rapids, Mich.

Nassar still faces numerous charges in state court in Michigan. After Tuesday's hearing, Nassar's attorneys said in a statement that Nassar's "position on the state cases has not changed and we intend to proceed to trial. The plea today was negotiated only to resolve the federal charges."

Nassar, who attended several Olympics as team physician, worked for many years as a sports doctor at Michigan State University.

According to the deal, Nassar agreed to plead guilty to three federal counts of receiving and possessing child pornography and destroying and concealing evidence when he believed, correctly, that the ongoing investigation by law enforcement would reveal his child-pornography activities.

In return for his guilty plea, federal authorities have agreed not to further prosecute Nassar "for sexual exploitation and attempted sexual exploitation of children." That relates to allegations that Nassar molested two minors in his swimming pool in 2015. And he won't be prosecuted for "interstate/international travel with intent and engaging in illicit sexual conduct in foreign places." That relates to "conduct that is alleged to have occurred between 2006 and 2013" involving two other young women.

"This affects federal charges involving [alleged] abuse overseas or at the Karolyi ranch," says John Manly, a lawyer for many of the plaintiffs. Famed gymnastics coaches Bela and Martha Karolyi have a ranch in Texas that serves as a training site for top U.S. female gymnasts.

Manly says the plea deal would affect about 10 percent of the estimated 119 women who have alleged sexual abuse by Nassar — but that would include some of the most prominent plaintiffs, including gymnasts who competed in the Olympics and other major sports competitions.

According to Manly, his clients' reactions range from sadness to anger.

"The message the federal government is sending and the U.S. Attorney's Office is sending [with the plea bargain]," Manly says, "is either it didn't happen or it doesn't matter. In my view that's a breach of faith with our athletes."

But the federal government says the plea bargain only involves the four individuals mentioned in the agreement, adding that each of them supported the plea deal and resolution.

A statement by the U.S. Attorney's Office for the Western District of Michigan says, "The plea agreement does not preclude the government from pursuing additional charges against Nassar related to his conduct with other individuals, if appropriate."

According to Acting U.S. Attorney Andrew Birge, "With Dr. Nassar's admissions of guilt on federal charges today, victims and the public can be assured that a day of reckoning is indeed in Dr. Nassar's future. Today's guilty plea ... ensures that all of Dr. Nassar's victims, including those who are not victims of the current charges or referenced in the plea agreement, will have an opportunity for vindication through the broad federal sentencing process. My office will be aggressively pursuing a sentence that accounts for all of Dr. Nassar's conduct."

Nassar faces a minimum of five years and a combined maximum of 60 years in prison on the child pornography charges. The court's starting point for determining an appropriate sentence is roughly 22 to 27 years in prison.

"Sentencing guidelines are definitely important [to a sentencing judge]," says former sex crimes prosecutor Dan Schorr. "The judge does have some discretion, [but] for the most part, the judge is looking to follow those guidelines. You're probably going to see a sentence somewhere in that [22 to 27 year] range."

Neither the prosecutors nor Nassar's attorneys would say why they struck the plea deal. Schorr, the managing director at Kroll, a global risk consulting and investigatory firm, has closely followed the Nassar case.

"The prosecution wants to make sure the defendant goes to prison for as long as possible," Schorr says, adding, "and sometimes using all of these potential charges and getting a plea deal that leads to a lot of prison time will [guarantee] he goes to prison for the rest of his life or close to it."

"Also, you never know what happens at a trial or with the appellate process and with some other [alleged] victims who may not want to testify."

Schorr believes Nassar is being motivated by any chance at freedom. "He's been accused by so many [alleged] victims, there's a very good chance he'll spend the rest of his life in prison," Schorr says. "So trying to work out some plea bargain that allows him, possibly at the end of his life, some time outside of prison may be something he's looking for."

Nassar, who is 53, worked with female gymnasts in Michigan as far back as the late 1970s. In 1986, he became a member of the USA Gymnastics medical staff; ultimately he was appointed national medical coordinator for USAG. In 1993, Nassar earned an osteopathic medical degree from Michigan State University, where he worked from 1997 until last September, when the school fired him amid the emerging allegations of longtime sexual abuse.