Accessibility links
Pennsylvania Man Confesses To Killing 4 Missing Men Found In Common Grave : The Two-Way Prosecutors say "a person of interest" admits slaying four men, only one of whom has been positively identified among the grisly remains discovered on a farm.

A Pennsylvania man under suspicion for his connection to the disappearance of four young men who went missing in rural Pennsylvania last weekend has confessed to their murders.

Cosmo DiNardo, 20, agreed to plead guilty to four murder counts, according to his attorney Paul Lang outside the Bucks County Court of Common Pleas. 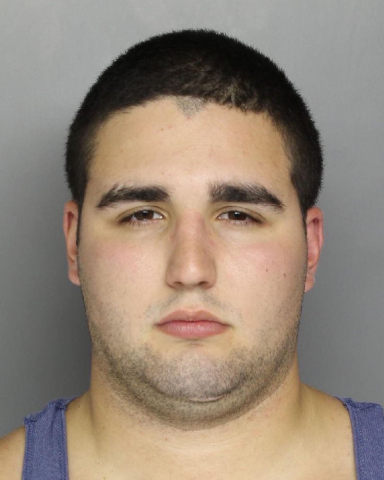 Cosmo DiNardo, 20, had been deemed a person of interest in the case; his parents own the property where one of the men's body was found. Bucks County District Attorney's Office hide caption

"In exchange for that confession, Mr. DiNardo was promised by the district attorney that he will spare his life by not invoking the death penalty," said Lang.

District Attorney Matthew D. Weintraub declined to comment via Twitter, although his office had retweeted media coverage of Lang's statement. Weintraub also said he expected to have more information on Friday morning.

DiNardo, of Bensalem, Pa., was being held on a $5 million cash bail after being arrested Wednesday; one day earlier, he had been deemed a "person of interest" in the missing-persons case after he was accused of trying to sell the car belonging to one of the missing men.

Late Wednesday night DA Weintraub spoke to the media after informing the parents of Dean Finocchiaro, 19, of Middletown Township, that their son's body had been identified after being recovered from a grave that was more than 12 feet deep.

"This was a homicide. Make no doubt about it," Weintraub said at a news conference, describing how investigators had spent days searching land owned by DiNardo's parents in Solebury Township — an area that the district attorney's office describes as normally placid and picturesque.

"I don't understand the science behind it, but those dogs could smell these poor boys 12 1/2 feet below the ground," Weintraub said.

In addition to Finocchiaro, the missing men are:

Meo and Sturgis were friends who worked together, police say. Both of their cars were found after they were reported missing last week — and DiNardo was arrested after a friend of his told police that DiNardo had approached him about selling Meo's 1996 Nissan Maxima for $500 on July 8. The car was later recovered from the DiNardos' land in Solebury Township.

It's the second time in recent days that DiNardo has been arrested. He was charged with an unrelated weapons offense but was released late Tuesday after his father posted part of a $1 million bail.

On Wednesday, prosecutors argued for a higher bail amount, on the grounds that DiNardo "had a history of severe mental illness, that he had been committed to a mental health facility after firing a shotgun, that the new charges involved one of the missing men, and that DiNardo and his family's property are at the nexus of the ongoing investigation," the district attorney's office says.

Police say they were able to establish that DiNardo's and Meo's vehicles were at the same place around the same time on the night of July 7, after their search for the license plate numbers of DiNardo's Ford pickup truck and Meo's Nissan in a local database.

The tags of both vehicles were captured by a mobile police license plate reader within seconds of each other on that Friday night in Peddler's Village, an area of restaurants and stores less than two miles from DiNardo's parents' property, investigators say. Less than 1 mile from that spot, police also found Sturgis' vehicle.

As Newsworks reports from member station WHYY, an attorney representing the DiNardo family had "issued a statement earlier Wednesday saying they sympathize with the families of the missing men and are cooperating 'in every way possible with the investigation.' "