Accessibility links
Macron's Strategy For Trump In Paris: Long Handshakes And Military Spectacles : The Two-Way A much-discussed awkward moment at the Notre Dame Cathedral didn't stop the two leaders from grasping each other in an epic handshake Friday. 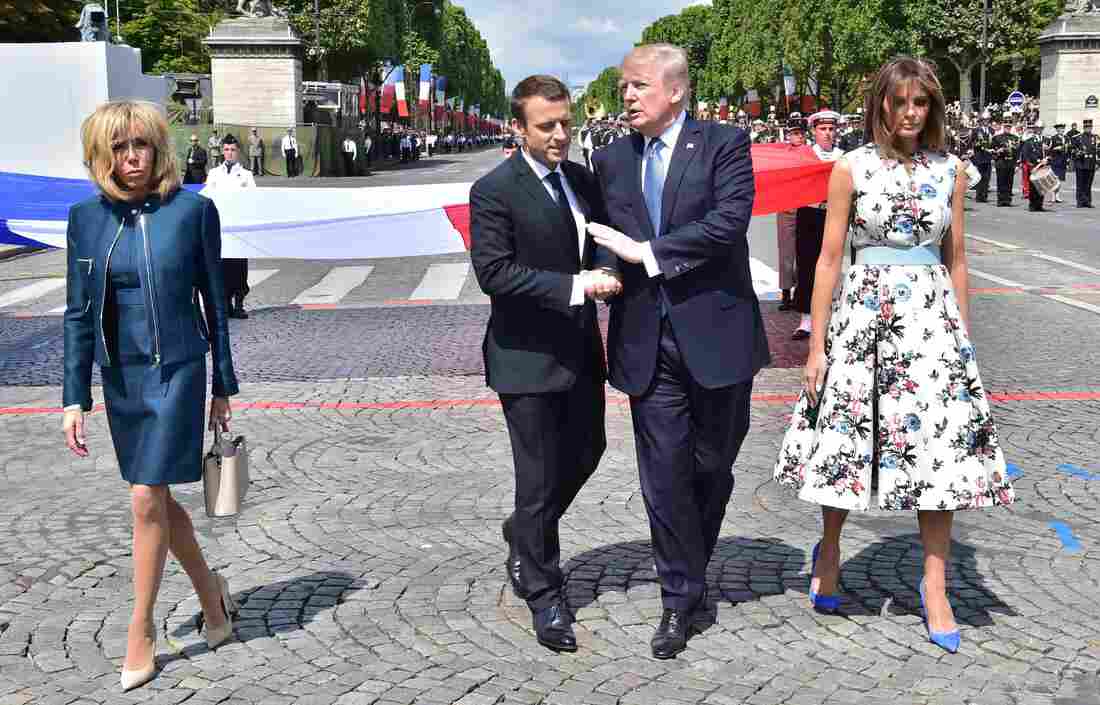 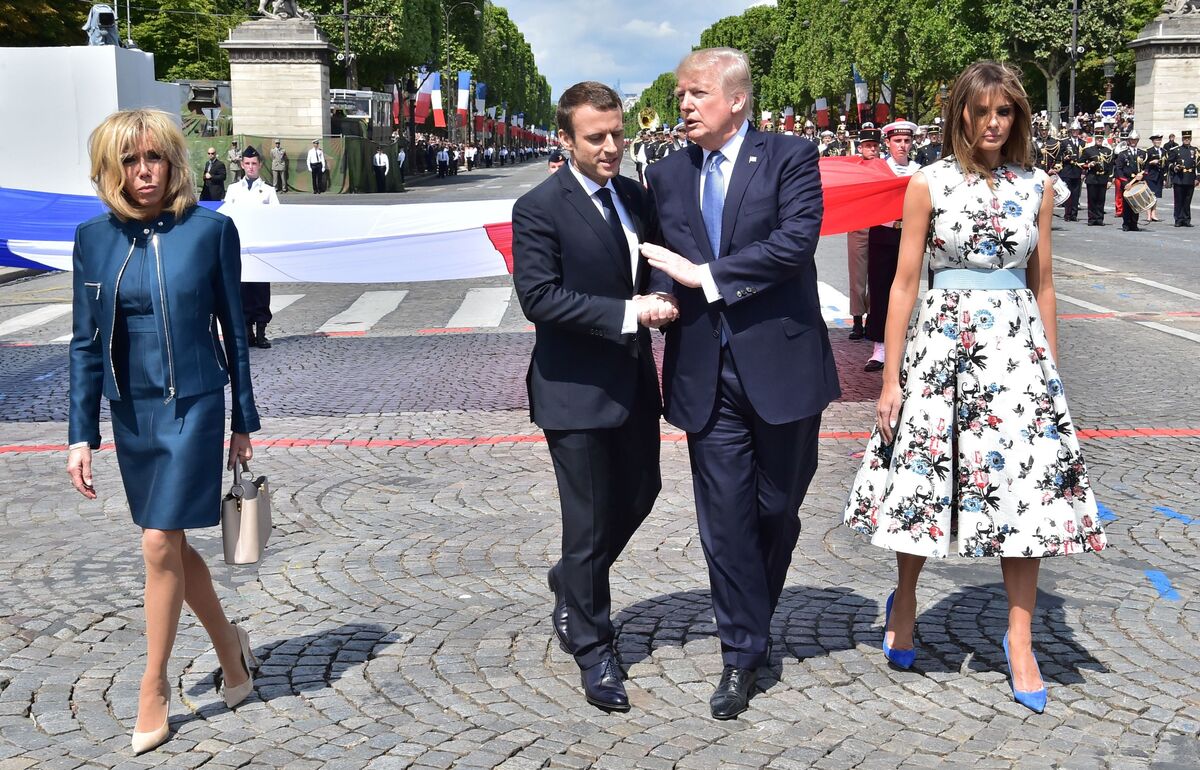 There was much pomp and circumstance — and hand-holding, and even a dash of Daft Punk — in President Trump's visit to Paris, as French President Emmanuel Macron used any means possible to embrace and entertain the American leader during his two-day stay.

Trump's visit began Thursday with a trip to Napoleon's Tomb at Les Invalides, where he was given full military honors as he and Melania Trump met Macron and his wife, Brigitte. It continued with the two couples having dinner high inside the Eiffel Tower, and it ended Friday with a parade to mark Bastille Day.

"This was the crowning moment of President Trump's trip — a spectacular military parade down the Champs-Elysées that he was able to watch from his grandstand seat at the Place de la Concorde."

In addition to France's national holiday, the parade also commemorated the almost 100 years since the U.S. entered into World War I in April 1917.

As for how the parade was received, and perceived, Eleanor reports, "All the French commentators were saying, 'Oh, Trump loves this — he's rapt with attention!' "

We'll note that the two leaders seem divided on one point: the merits of Daft Punk, whose songs were rendered in a medley by a military band Friday. While Macron and other audience members smiled during snippets of hits such as "Get Lucky," Trump seemed less impressed.

It was just one way in which Macron rolled out France's red carpet for Trump, following the same program laid out by Saudi Arabia during Trump's first foreign trip as president, in late May. As NPR reported, the Saudi trip included lavish receptions and ostentatious ceremonies — including a mysterious glowing orb, upon which Trump and other leaders laid their hands.

Against the backdrop of spectacles meant to dazzle the visitors, Trump and Macron apparently succeeded in become closer.

In the span of one minute on Friday, the two leaders hugged each other and shook hands twice, in what looked for all the world like a literal implementation of Macron's plan to engage with Trump. At around 30 seconds, it was a new and prolonged take on their famous knuckle-whitening handshake of late May in Brussels.

Despite a much-discussed awkward moment at the Notre Dame Cathedral — in which Trump told Brigitte Macron, "You're in such good shape," before stating, "Beautiful" — the trip to France largely went as scripted.

At a news conference Thursday, "Trump lavished praise on Macron, at one point putting his arm on the French president," NPR's Brian Naylor reports.

"We have a very good relationship, a good friendship," Trump said, calling Macron "a great president."

Trump's trip to Paris was a stark contrast to one week ago, when the American leader was seen as isolated at the Group of 20 Summit in Germany — and where his position on climate change prompted some to call the group the "G-19."

On this visit, Trump even hinted that he might review his stance on the Paris climate agreement, from which he withdrew the U.S. on June 1.

"Something could happen with respect to the Paris accord," Trump said in response to a reporter's question. "We'll see what happens."

Macron's overtures and offer of friendship come as Trump is seen having cordial but not overly warm relations with other traditional U.S. allies in Europe, such as Angela Merkel's Germany and Theresa May's Britain. In France, Macron has been criticized for inviting Trump to visit. But if his plan was to strengthen France's ties to the U.S., it seems to have worked.

"For two presidents who are said to be completely ideologically opposed on almost every issue, they found a lot to agree upon," Eleanor says, noting Trump and Macron's plan to work on a peace road map for Syria and to fight terrorism.

In the past, Trump has suggested France's liberal migration policies have made Paris a dangerous place. When he withdrew from the climate deal that was named for the city, he famously said, "I was elected to represent the citizens of Pittsburgh, not Paris."

In Paris, a French journalist asked the American president about his past criticisms — and whether he would still say the same things about France.

"You're gonna have a very, very peaceful and beautiful Paris — and I'm coming back," Trump said.

"And you're always welcome," Macron said.