Accessibility links
'American Nightmare': How The Minneapolis Police Shooting Is Roiling Australia : The Two-Way Days after a Sydney woman was shot and killed by Minneapolis police, Australian publications are covering the story as front-page news.

'American Nightmare': How A U.S. Police Shooting Is Roiling Australia

'American Nightmare': How A U.S. Police Shooting Is Roiling Australia 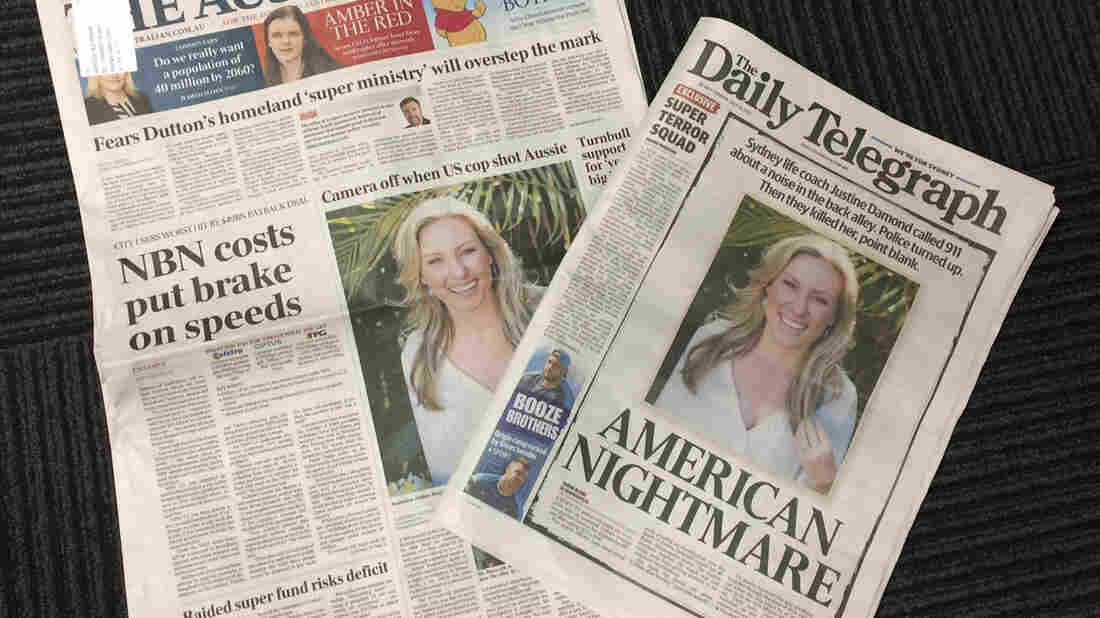 The death of Sydney's Justine Ruszczyk, who was shot dead by a Minneapolis police officer on Saturday, is front-page news in Australia. Kristen Gelineau/AP hide caption 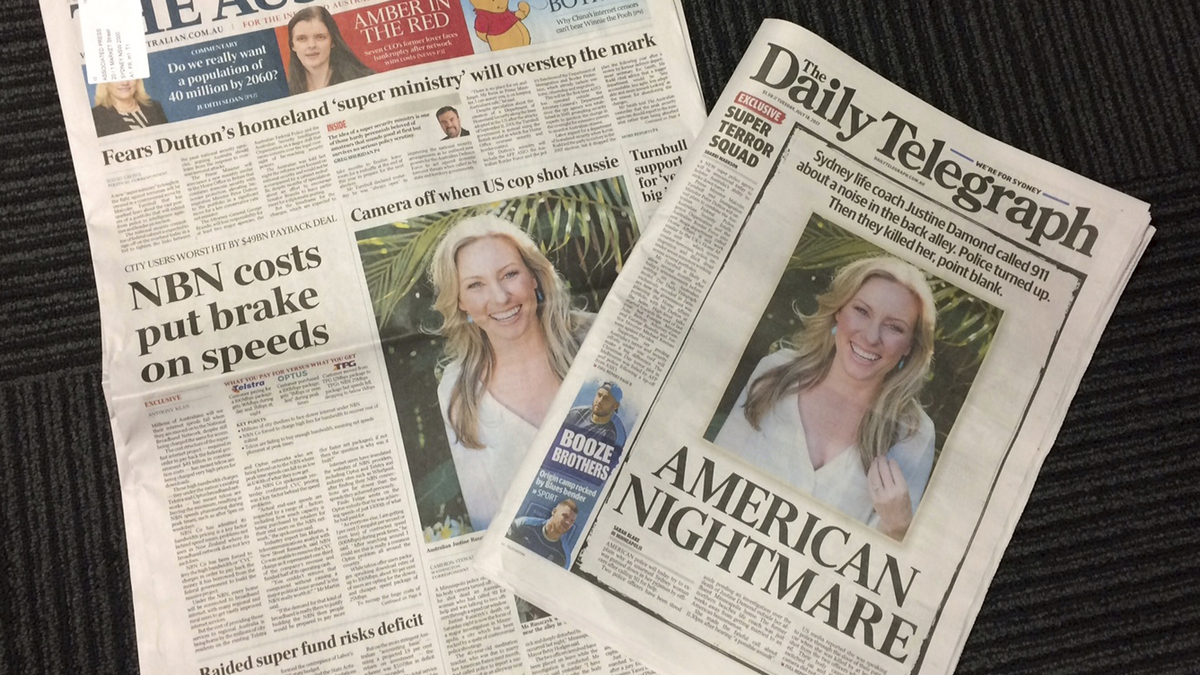 The death of Sydney's Justine Ruszczyk, who was shot dead by a Minneapolis police officer on Saturday, is front-page news in Australia.

Just days after a police shooting claimed the life of an Australian national in Minneapolis, Justine Ruszczyk's death is stirring shock and consternation in the country where she was raised.

"Justine, our daughter, was so special to us and to so many others," her father, John, told reporters in Sydney on Monday. "We went down to Freshy [Freshwater] Beach this morning and saw the blackness change to light. Justine was a beacon to all of us. We only ask that the light of justice shine down on the circumstances of her death."

As MPR's Doualy Xaykaothao has reported, the Australian yoga and meditation instructor — who went by the name Justine Damond in her professional life — was shot and killed by Minneapolis Police Officer Mohamed Noor. He and a fellow officer had been responding to a 911 call Saturday night.

Tuesday evening, a state agency investigating the shooting said the other officer on the scene, Matthew Harrity, told investigators that when they arrived, he was startled by a loud sound near the patrol car. He said immediately after the noise Justine Ruszczyk approached Harrity's side — the driver's side — of the car. Harrity said at that point, Noor fired his gun through the open driver's window, striking the woman.

The state investigators said Noor has declined to be interviewed by them.

"It was Justine who called 911 on Saturday evening, reporting what she believed was an active sexual assault occurring nearby," her fiance, Don Damond, said at a news conference Monday. "Sadly, her family and I have been provided with almost no additional information from law enforcement regarding what happened after police arrived. We've lost the dearest of people, and we are desperate for information."

Noor "extends his condolences to the family and anyone else who has been touched by this event," his lawyer said in a statement released later. "He takes their loss seriously and keeps them in his daily thoughts and prayers."

The story of the shooting has reached far beyond Minnesota's borders, making its way into front-page headlines for Australian publications.

In The Daily Telegraph, a nationally distributed newspaper based in Ruszczyk's hometown Sydney, the incident was declared in bold black letters an "American Nightmare."

"To most Australians, the recent surge in police shootings across the US was obviously concerning but at the same time a remote issue, far from Australia's shores," the paper notes in its front-page story. "That view has changed now with the fatal shooting by police of Sydney woman Justine Ruszczyk Damond in the suburb of Fulton, Minneapolis."

"I demand answers. If anybody can help, just call police and demand answers," said her stepson, Zach, according to the paper. "I'm so done with all this violence. America sucks."

The Australian, another national newspaper, also ran the story on its front page.

The story has resonated in Australia partly because it feeds "into Australians' long-held fears about America's notorious culture of gun violence," according to The Associated Press.

Stuart Cohen, reporting for NPR in 2012, noted the likely origin of this difference in perspective: a 1996 shooting massacre in Tasmania, which left 35 people killed and led to sweeping changes to the country's gun laws.

"The new laws prohibited all automatic and semi-automatic weapons, and imposed strict licensing rules," Stuart reported. "Even paintball guns need a permit. There are also background checks and lengthy waiting periods for all purchases."

"We too value freedom," Tim Fischer, Australia's conservative deputy prime minister at the time of the Tasmania shooting, told Stuart. "But that's not the freedom to own machine guns in the main streets of the U.S. of A."

For now, though, focus in the U.S. has turned to the questions that remain unanswered — including why the two Minneapolis police officers didn't have their body cameras turned on during the shooting.

"We have few facts at this point," Minneapolis Mayor Betsy Hodges said at a news conference Sunday. "I want to know more. I call on the [Bureau of Criminal Apprehension] to share as much information with all of us as quickly as they can."