Accessibility links
Boston Launches Anti-Islamophobia Poster Campaign : The Two-Way A poster offers advice on how a bystander can help someone experiencing anti-Muslim harassment — without challenging the harasser. "Education is key to fighting intolerance," the mayor says.

The city of Boston is launching a poster campaign to fight Islamophobia by encouraging bystanders to intervene, in a nonconfrontational way, if they witness anti-Muslim harassment.

Starting Monday, the city began installing 50 posters around the city with advice on what to do if you see Islamophobic behavior. The posters recommend sitting by a victim of harassment and talking with them about a neutral subject while ignoring the harasser. 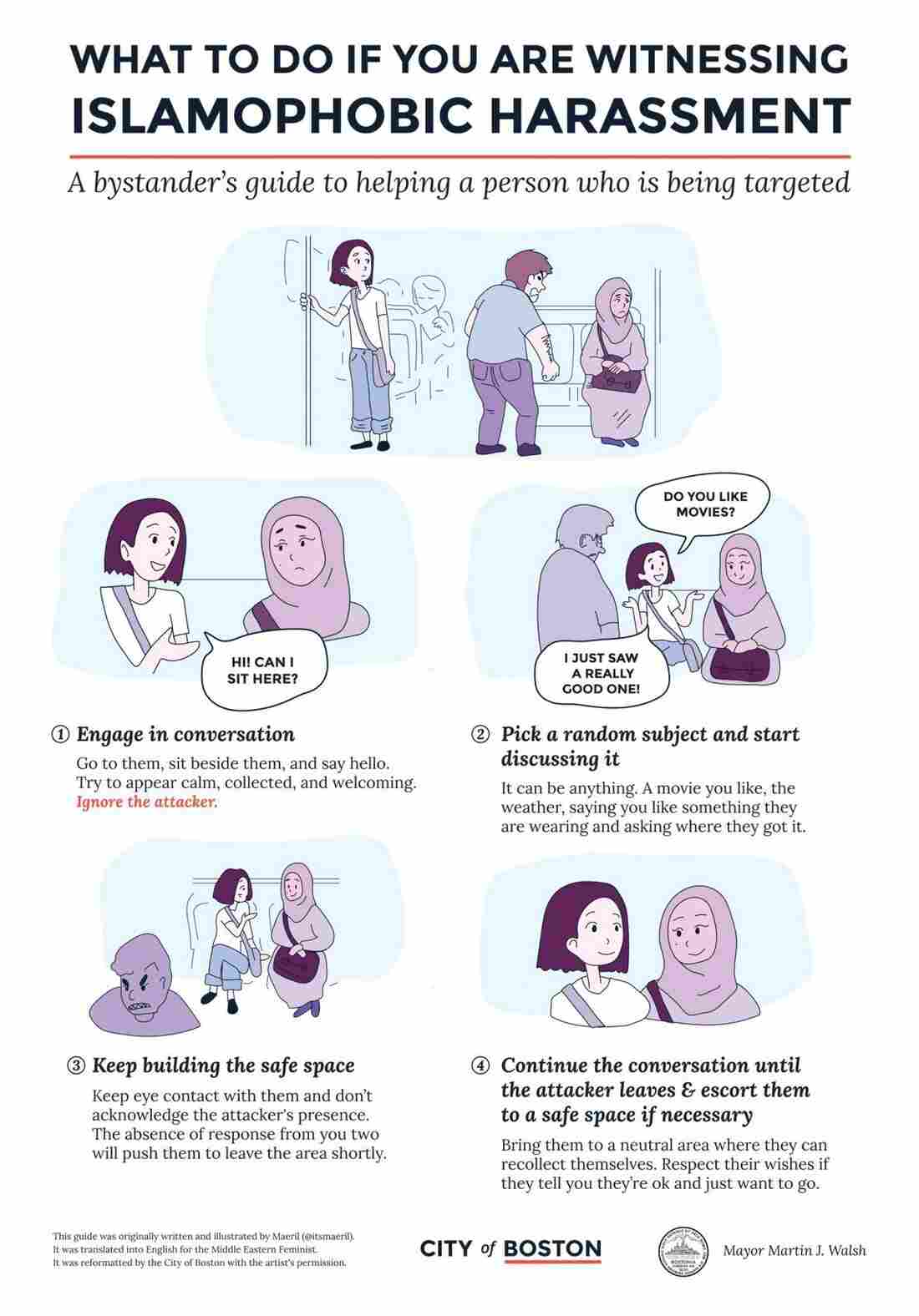 A poster campaign by the city of Boston offers advice on how bystanders can defuse the situation if a Muslim person is being harassed. The cartoon was drawn by the artist Maeril. Maeril/City of Boston hide caption 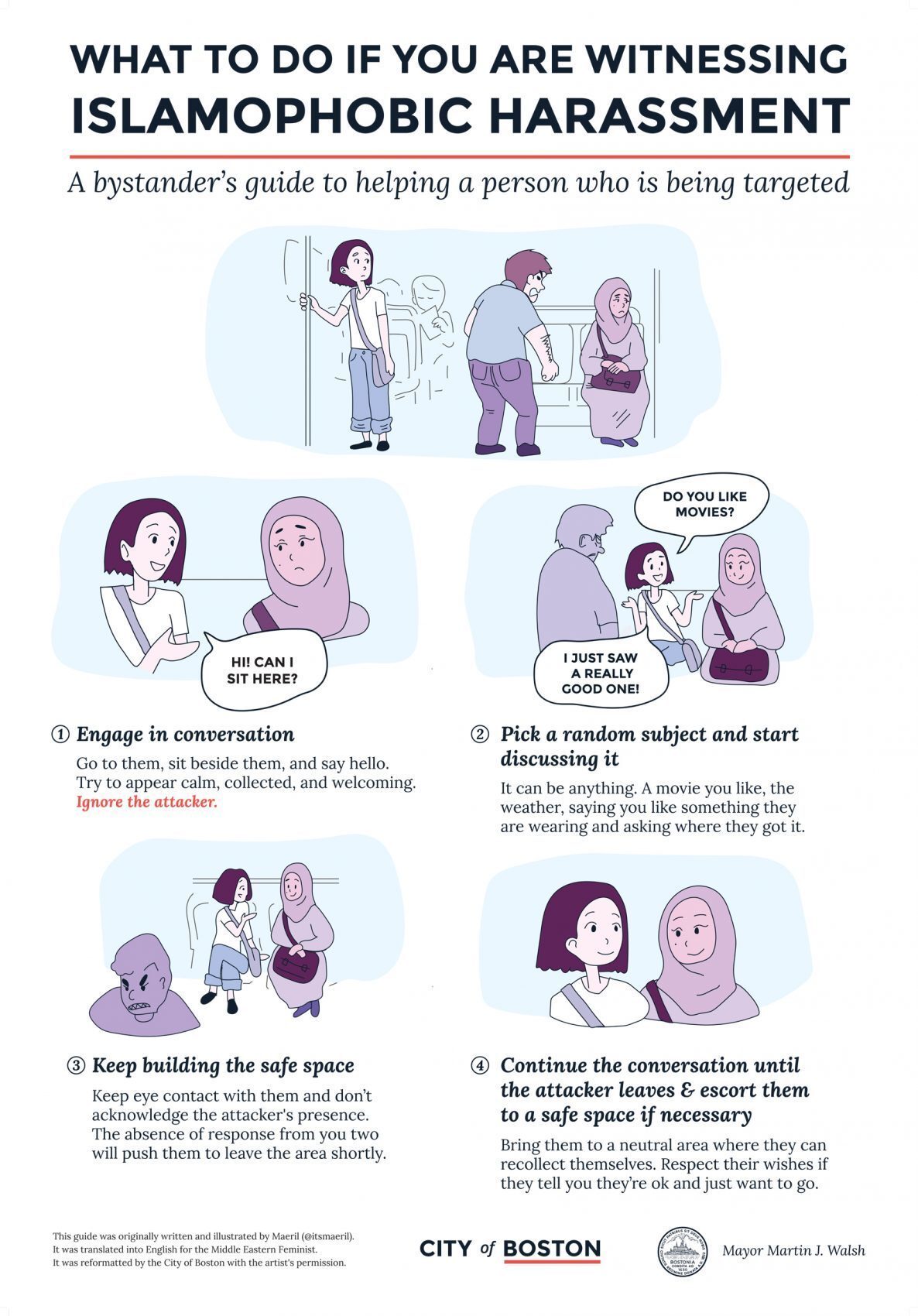 A poster campaign by the city of Boston offers advice on how bystanders can defuse the situation if a Muslim person is being harassed. The cartoon was drawn by the artist Maeril.

"The technique is called 'non-complementary behavior,' and is intended to disempower an aggressive person by countering their expectations," The Associated Press reports.

The cartoon how-to guide was drawn by a Paris-based artist named Maeril and translated into English for The Middle Eastern Feminist group on Facebook.

"These posters are one tool we have to send the message that all are welcome in Boston," Mayor Marty Walsh said, according to the AP. "Education is key to fighting intolerance, and these posters share a simple strategy for engaging with those around you."

A similar campaign is underway in San Francisco, the wire service reports.

Boston: The Conversation In Arab-American And Muslim Communities

Boston: The Conversation In Arab-American And Muslim Communities

Lisa Creamer, of member station WBUR, reports that Boston's poster initiative "follows recent charges against a man for allegedly yelling anti-Muslim slurs at a 61-year-old woman who was wearing a headscarf and riding the Orange Line." Creamer continues:

" 'It's an awkward place to be in, when you see someone being harassed,' said Faisa Sharif, Boston's citywide Somali neighborhood service liaison. '[The poster] does feature a Muslim woman, a woman in hijab. But I think it applies across all people from different backgrounds who are just in a tense situation in public or being harassed in public.'

"Yusufi Vali, executive director of the Islamic Society of Boston Cultural Center, said he feels the city's initiative is timely.

" 'The climate across the nation is certainly different under the current White House administration,' Vali said. 'The Boston-Muslim community is feeling what the rest of the nation is feeling: a lot of uncertainty and a sense of insecurity.' "

The posters will remain in place for six months, the AP says.

Learning — And Unlearning — To Be An 'Ambassador' For Islam