Accessibility links
In Poland, Effort To Take Control Of The Courts Inspires Protests : The Two-Way The ruling Law and Justice party has already tipped Poland's system of checks and balances. A new effort has sent protesters to the streets and prompted warnings of possible EU sanctions. 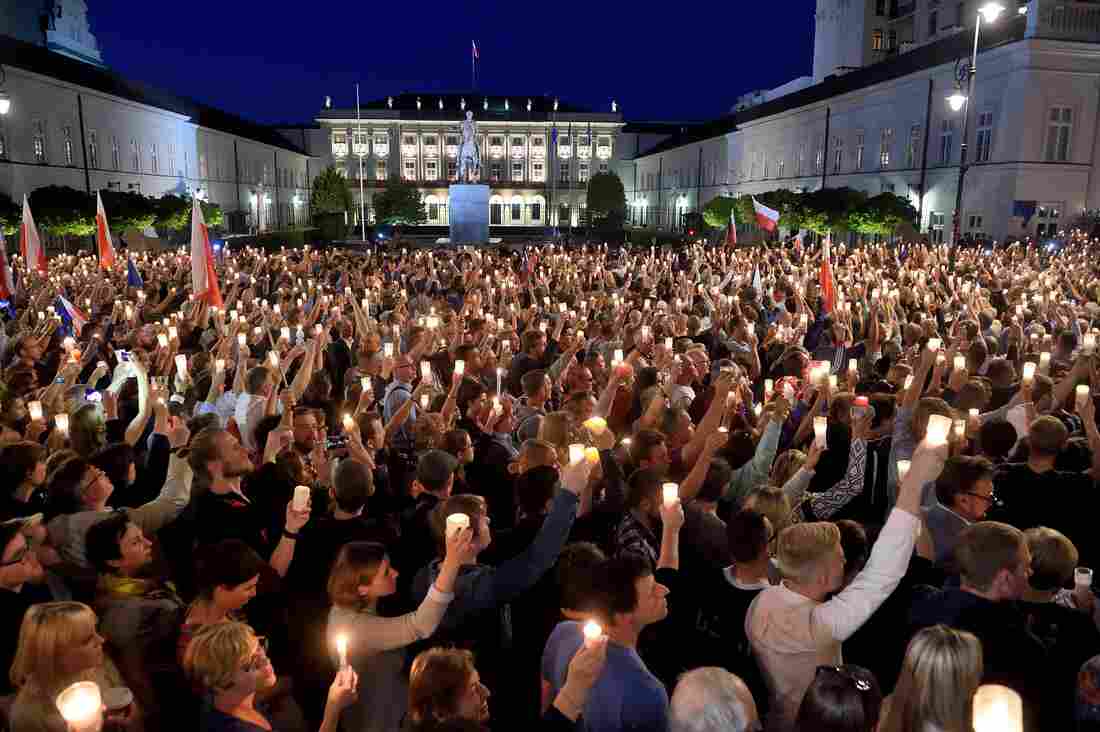 Protesters raise candles during a protest in front of the presidential palace in Warsaw on Tuesday, as they urge the Polish president to reject a bill giving the ruling party more control over the judiciary system. President Andrzej Duda made a surprise compromise bid over controversial court reforms, as protesters took to the streets. Adam Chelstowski/AFP/Getty Images hide caption 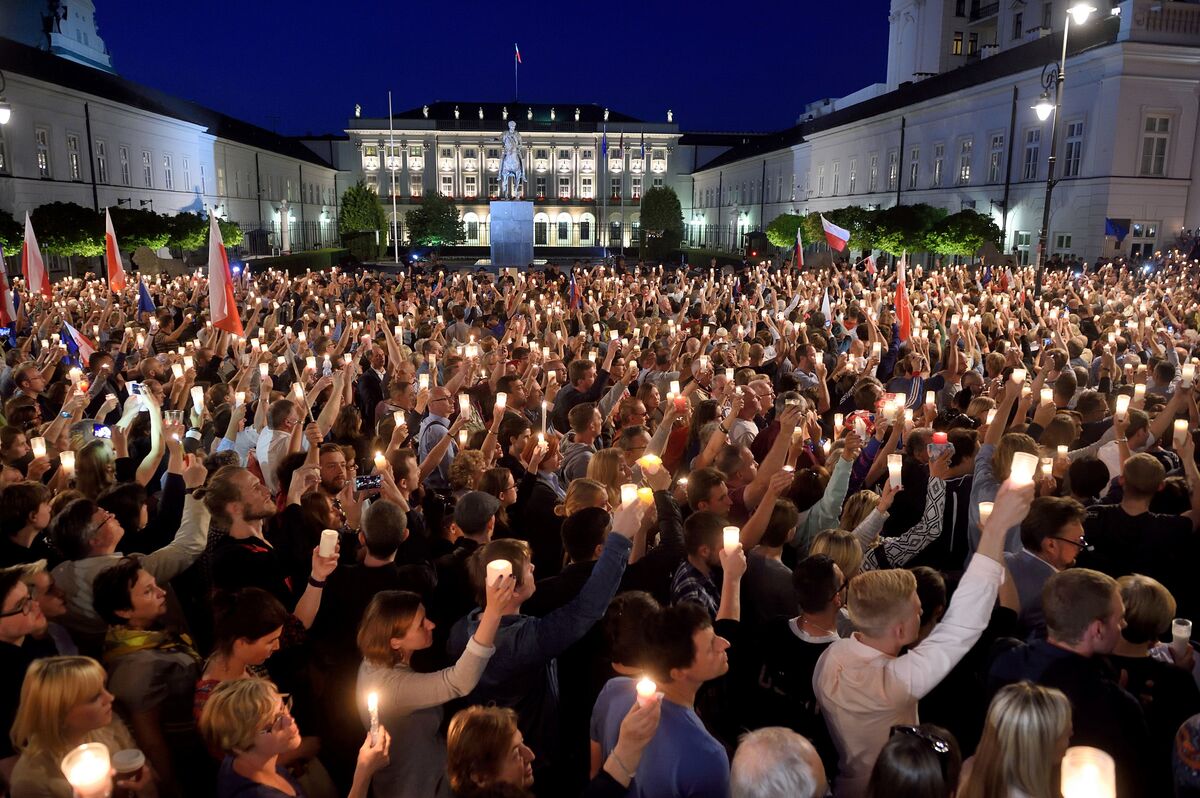 Protesters raise candles during a protest in front of the presidential palace in Warsaw on Tuesday, as they urge the Polish president to reject a bill giving the ruling party more control over the judiciary system. President Andrzej Duda made a surprise compromise bid over controversial court reforms, as protesters took to the streets.

As Poland's ruling party moves to take control of the country's high court, protesters are taking to the streets and European Union officials are warning of the possibility of sanctions.

There is fear, both within and outside of Poland, that a proposed measure would upend an already-weakened system of checks and balances.

The Law and Justice party is conservative, populist, Euro-skeptic and nationalist. Under the leadership of Jaroslaw Kaczynski, who does not hold elective office, the party has already sharply curtailed the power of the judicial branch. In late 2015, shortly after taking power, it passed a law to make it far harder for the Constitutional Tribunal to reject laws as unconstitutional. (The tribunal ruled the change was unconstitutional ... but the government, citing the new law, overruled the judges).

Now, the ruling party is targeting the country's highest court of appeals.

2015: Worries Mount In Poland As Parliament Moves To Upend Checks And Balances

As part of the proposed overhaul, the legislature has already advanced measures that would give the ruling party more control over lower courts.

Kaczynski says the "reforms" are necessary in the name of efficiency. He also accused the courts of being "controlled by lefties" and "foreign forces," The Guardian reports.

An EU official, European Commission vice president Frans Timmermans of the Netherlands, said the party's efforts, if successful, "would increase the systemic threat to the rule of law in Poland."

Meanwhile, demonstrators are marching in Warsaw, Krakow and other Polish cities to protest the threat to the court's independence, the Krakow Post reports. The outlet spoke to a number of demonstrators — including one man who said this was his first protest since the communist era ended nearly three decades ago.

"Justice should be blind," the man, identified only as Robert, said. "But now she is not. Now she has the face of the Minister of Justice," a powerful party official. The protester said he worried Poland could become "like Russia, Belarus, or even North Korea."

Politico EU reports that Polish President Andrzej Duda has taken the unusual step, for him, of challenging his party leadership on this issue. Duda, who was picked by party leader Kaczynski to run for office and largely toes the Law and Justice line, has introduced a version of the bill that gives the party less power.

The original bill is being bitterly debated in Parliament, where members of the opposition party have proposed 1,300 amendments, The AP reports. And the debate has gotten personal:

"An opposition lawmaker, Borys Budka, drew Kaczynski's wrath when he said that his late twin brother, President Lech Kaczynski, had prevented him from taking any drastic steps toward the justice system.

"Kaczynski's reaction was immediate and violent.

" 'Don't wipe your treacherous mugs with the name of my late brother. You destroyed him, you murdered him, you are scoundrels,' Kaczynski shouted from the podium. He was referring to the 2010 plane crash that killed the president, an incident he blames on the former government."

The Law and Justice party controls the Parliament and the presidency, and weakening the Constitutional Court removed a major obstacle to absolute power.

Still, the party has had to withdraw some of its plans after widespread popular resistance. Last October, the parliament attempted to make the country's restrictive abortion laws even more rigid, removing exceptions for rape or the life of the mother. Women staged mass protests, and Law and Justice (also known as PiS) backed off.

In December, PiS backed off a proposal to restrict media access to parliament — again, after impassioned street protests.

But Polish leaders have not seemed impressed by attempts to influence them from abroad, including threats of EU sanctions, Reuters reports:

"Despite the pressure, PiS has offered no concessions, instead presenting the criticism as unacceptable foreign meddling in domestic affairs of the country, which overthrew communism in 1989 and joined the EU in 2004. Its popularity also stems from record-low unemployment, a robust economy and increased social spending."