Accessibility links
Moon Dust Bag, Accidentally In Private Hands, Auctioned For $1.5 Million : The Two-Way NASA lost track of a bag that was used to carry samples during the first moon landing. A woman in Illinois bought the artifact for less than $1,000; on Thursday, it was sold for $1.5 million. 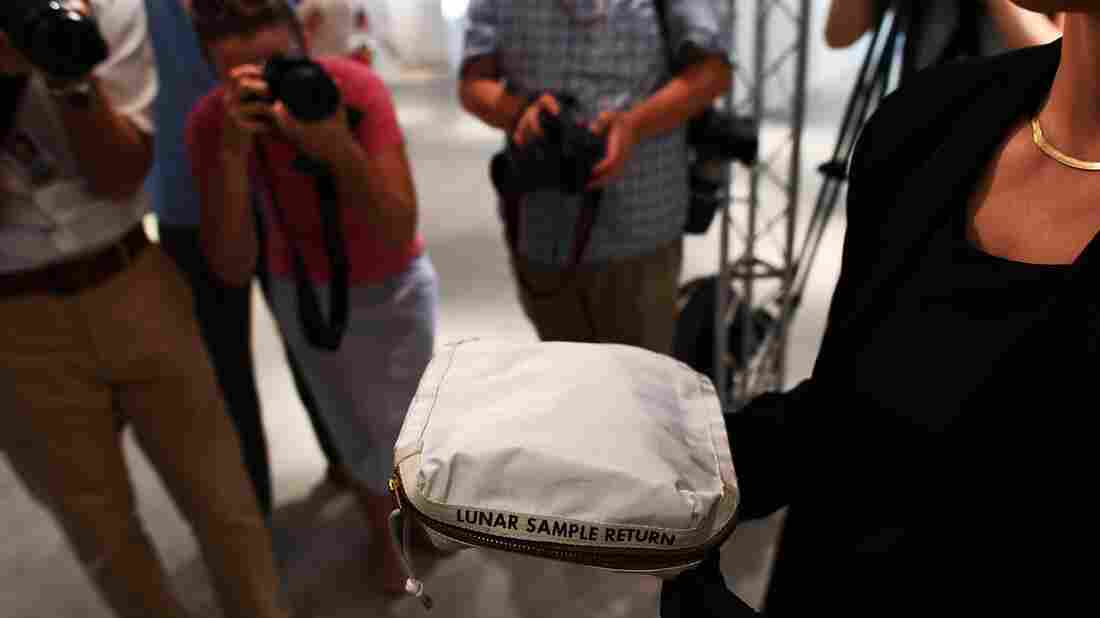 During a media preview on July 13, Cassandra Hatton of Sotheby's displays the Apollo 11 contingency lunar sample return bag. It was used by Neil Armstrong on Apollo 11 to bring back the first pieces of the moon ever collected. Jewel Samad/AFP/Getty Images hide caption 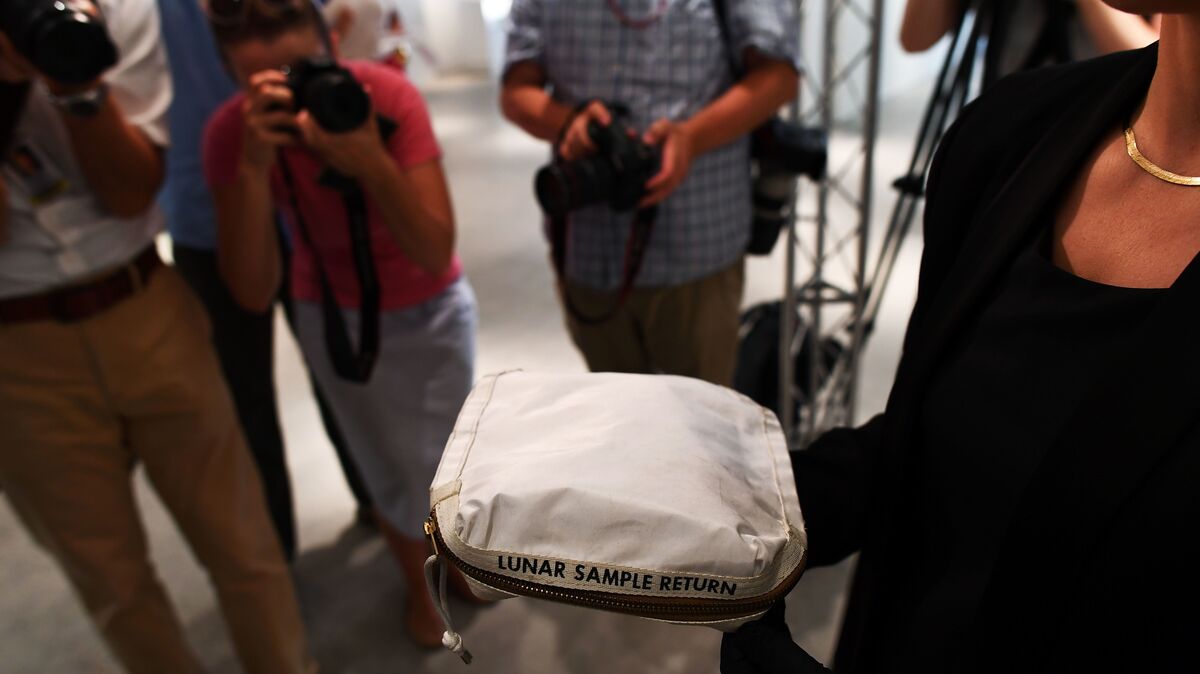 During a media preview on July 13, Cassandra Hatton of Sotheby's displays the Apollo 11 contingency lunar sample return bag. It was used by Neil Armstrong on Apollo 11 to bring back the first pieces of the moon ever collected.

A small, humble-looking bag received its moment in the spotlight today. It traveled to the moon and back, then sat forgotten in a museum basement. It was seized by officials who didn't know its value, sold unceremoniously to a keen-eyed space enthusiast, then battled over in court.

Then the lunar collection bag from the Apollo 11 mission — and the tiny bits of moon dust embedded within it — hit the Sotheby's auction block.

Nancy Carlson purchased the bag for less than $1,000. On Thursday, it sold for $1.5 million, or $1.8 million including the premium paid to Sotheby's (lower than the $2 million plus that Sotheby's had predicted).

The cloth bag, about the size of a sheet of notebook paper, was used by Neil Armstrong as he gathered samples during the first manned mission to the moon in 1969 — exactly 48 years ago on Thursday.

Most of the artifacts from that historic mission are in the collections of the Smithsonian. Somehow this bag was separated from the other equipment, and its significance went unrecognized.

It wound up in the garage of a man named Max Ary, who was the former director of a space museum in Hutchinson, Kansas. The Kansas City Star reports that under Ary's leadership, that museum, the Cosmosphere, had "a wealth of space travel artifacts" — and no shortage of chaos:

"Record keeping, say both Ary and the museum's current administration, was at best inexact. The rush of the items brought to the Cosmosphere became jumbled in sometimes slap-dash, handwritten inventory lists.

"At some point in the late 1970s and early 1980s, the Smithsonian sent loosely organized boxes of materials to Kansas that probably included the lunar sample bag.

" 'People knew that this was Apollo hardware, this was Gemini hardware,' said Jim Remar, the Cosmosphere's current president and CEO who joined the museum in 2000. 'But nobody knew if this was flown on a respective mission or not.' "

Ary began selling artifacts — not just his own personal collection, but items that belonged to the museum or to NASA, which weren't his to sell. He was convicted of theft, money laundering and fraud, and sent to prison.

After his conviction, the U.S. government seized Ary's space memorabilia and eventually sold them to cover his fines. That included the bag, which was found in Ary's garage.

She sent it to the Johnson Space Center for testing, to see if it really contained lunar dust. The answer: definitely. And while they were testing it, NASA staff realized it wasn't from just any mission: it was from Apollo 11.

And NASA didn't want to give it back.

Carlson and the space agency went to court over the bag. NASA said it was a national treasure that "belongs to the American people and should be on display for the public." The item should never have been sold to an individual, the agency argued.

Carlson said she bought it fair and square.

The Associated Press reports that a judge ruled in December that while the bag "shouldn't have gone up for auction, he didn't have the authority to reverse the sale. He ordered the government to return it."

NASA gave it back to Carlson, and Carlson sold it off to the highest bidder.

According to Sotheby's, Carlson plans to use part of the proceeds to fund medical research and therapy charities and establish a scholarship fund at her alma mater.