Accessibility links
Justice Department Announces 'Largest Darknet Takedown In History' : The Two-Way A joint operation by the department, the FBI and international law enforcement has shut down AlphaBay and Hansa, two of the world's largest anonymous marketplaces for illicit drugs and goods. 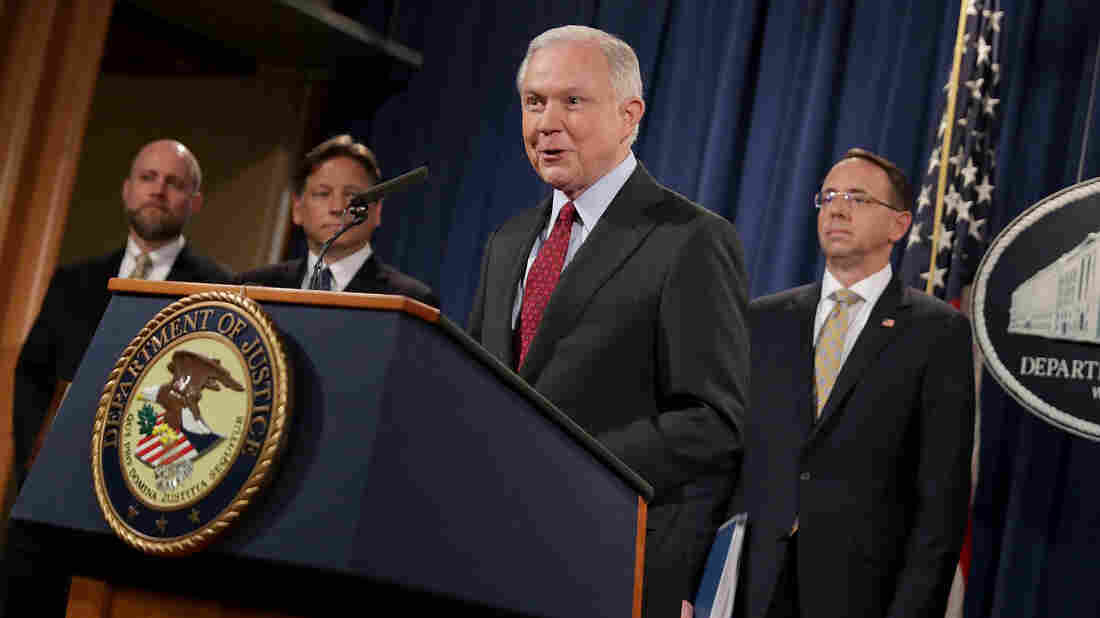 Attorney General Jeff Sessions announces the takedown of AlphaBay, a massive darknet marketplace "used to sell deadly illegal drugs" and procure stolen and counterfeit goods, according to the Justice Department. He delivered the news to reporters in Washington, D.C., on Thursday. Chip Somodevilla/Getty Images hide caption 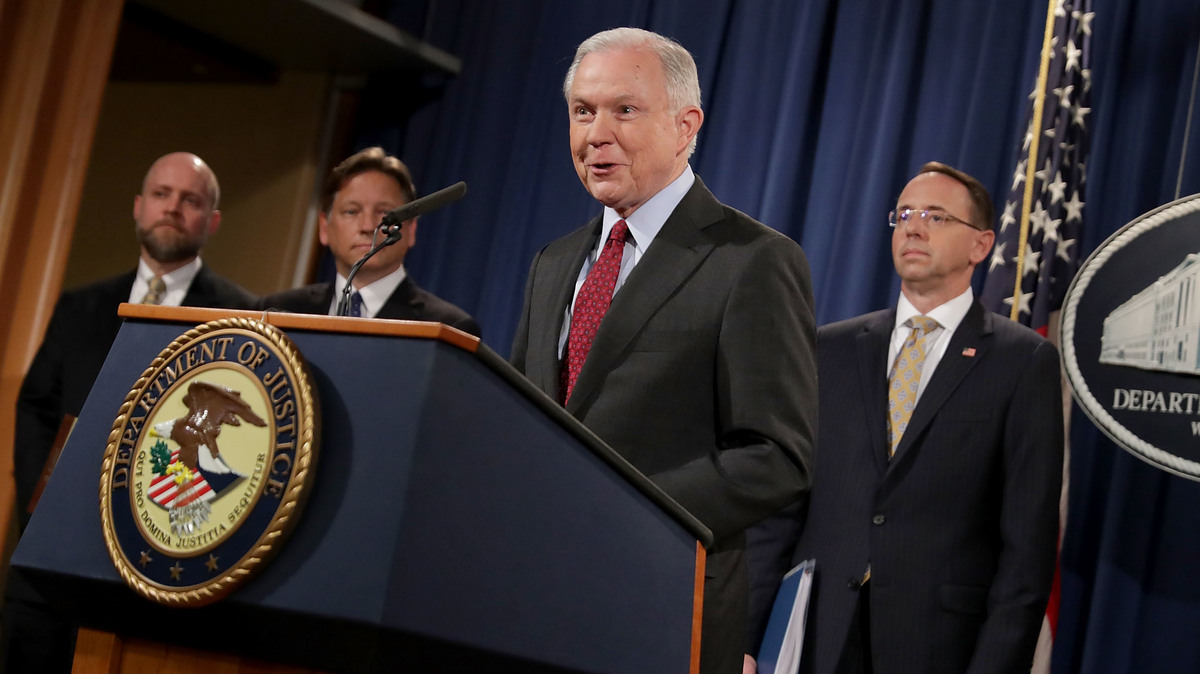 Attorney General Jeff Sessions announces the takedown of AlphaBay, a massive darknet marketplace "used to sell deadly illegal drugs" and procure stolen and counterfeit goods, according to the Justice Department. He delivered the news to reporters in Washington, D.C., on Thursday.

The Justice Department announced Thursday that together with the FBI and international law enforcement agencies, officials had shut down "the largest darknet marketplace in history." AlphaBay, a Web bazaar where users' identities were cloaked and illicit goods and drugs were sold, has officially been seized and shut down.

"This is the largest dark net marketplace takedown in history," Attorney General Jeff Sessions said in remarks prepared for a news conference Thursday in Washington, D.C.

Sessions Says He Plans To Continue Serving As Attorney General

The website allegedly trafficked in illegal drugs, stolen documents, counterfeit goods and "other computer hacking tools, firearms, and toxic chemicals throughout the world," according to the Justice Department. Officials say that around the time it was shuttered, AlphaBay boasted "250,000 listings for illegal drugs and toxic chemicals," as well as upwards of 100,000 other illicit items.

In a complaint filed Wednesday, federal prosecutors point out a FAQ on the site's home page: "Is AlphaBay Market Legal?"

"Some people have really asked this question. Of course not," the site answered, according to the complaint. "We are an anonymous marketplace selling drugs, weapons and credit cards." 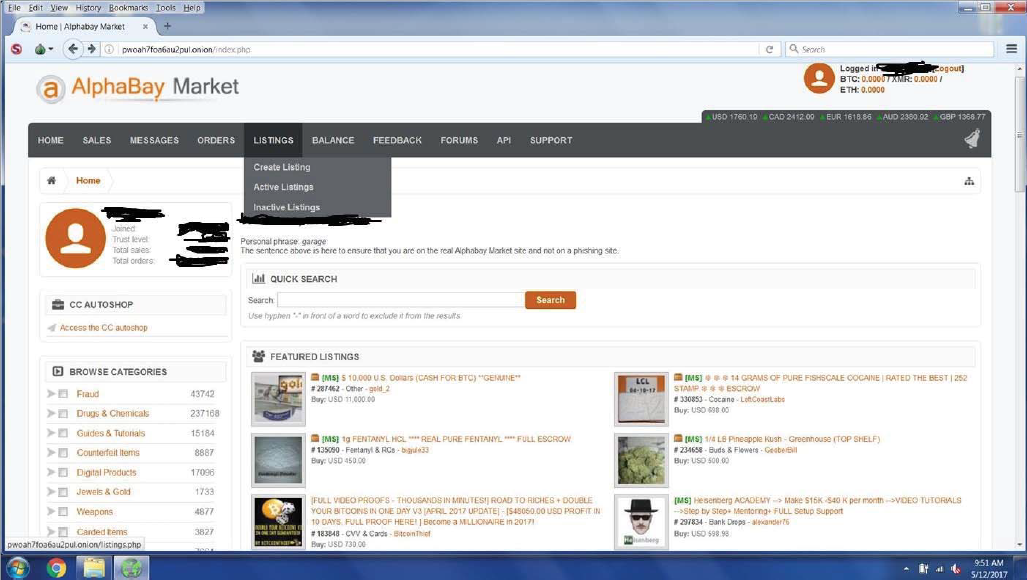 A screenshot of AlphaBay before it was taken down, included in the federal government's civil forfeiture complaint. Justice Department/Screenshot by NPR hide caption

"This is a landmark operation. AlphaBay was roughly 10 times the size of the Silk Road," acting FBI Director Andrew McCabe said at the news conference, referring to the large anonymous marketplace whose founder was convicted of drug charges in 2015. "We're talking about multiple servers in different countries, hundreds of millions of dollars in cryptocurrency and a darknet drug trade that spanned the globe."

U.S. authorities say they collaborated with law enforcement in a half-dozen countries on three continents. Another darknet marketplace, called Hansa, was shut down Thursday as part of the international operation.

"The two markets were created to facilitate the expansion of a major underground criminal economy, which affected the lives of thousands of people around the world and was expressly designed to frustrate the ability of law enforcement to bring offenders to justice," Europol, the European Union's law enforcement agency, said in a statement Thursday.

AlphaBay's alleged founder, Alexandre Cazes, was arrested on drug and money laundering charges earlier this month in Thailand, where he was later found dead in Thai custody. The Justice Department says it appears Cazes "took his own life."

Police have also seized millions of dollars and filed a civil forfeiture complaint against the "high value assets" owned by Cazes and his wife.

"Law enforcement agencies will now begin to sift through the forensic material gathered during the strikes against AlphaBay and Hansa Market," Ian Cruxton, deputy director of intelligence for the U.K.'s National Crime Agency, said in a statement. "The criminals who used these sites would be right to fear the outcome of those investigations."