Accessibility links
At Least 10 Dead, Dozens More Found In Tractor-Trailer In San Antonio : The Two-Way A 60-year-old Florida man is in federal custody over a case of apparent human smuggling in Texas. San Antonio emergency personnel found 39 people in the back of a truck in a Walmart parking lot. 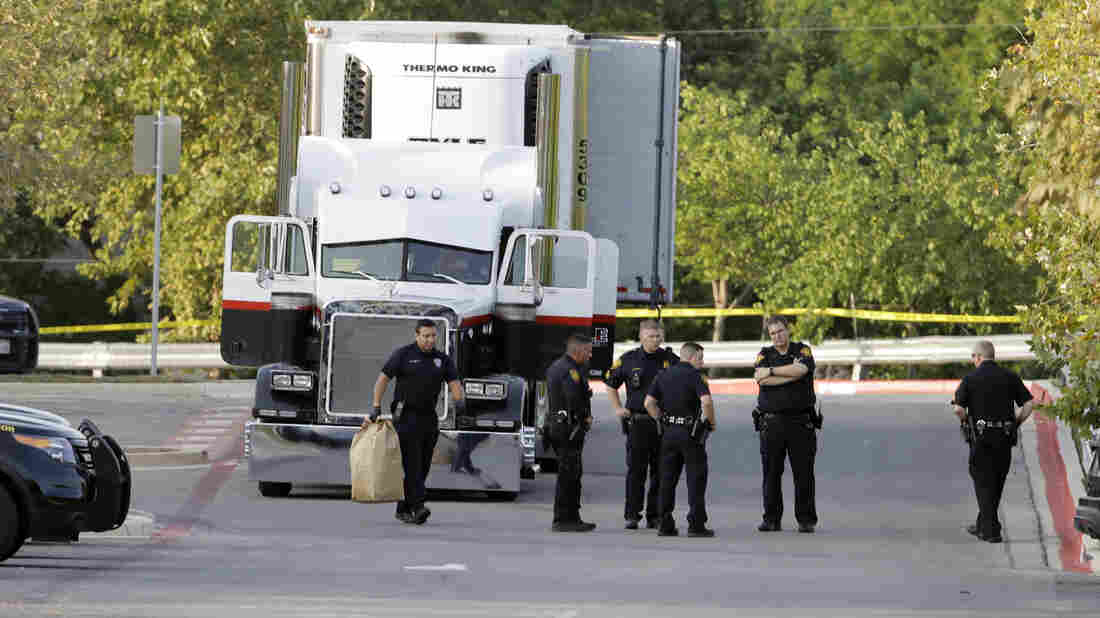 San Antonio police officers are seen in a parking lot where at least nine people were found dead in a tractor-trailer that contained at least 30 others outside a Walmart store. Eric Gay/AP hide caption 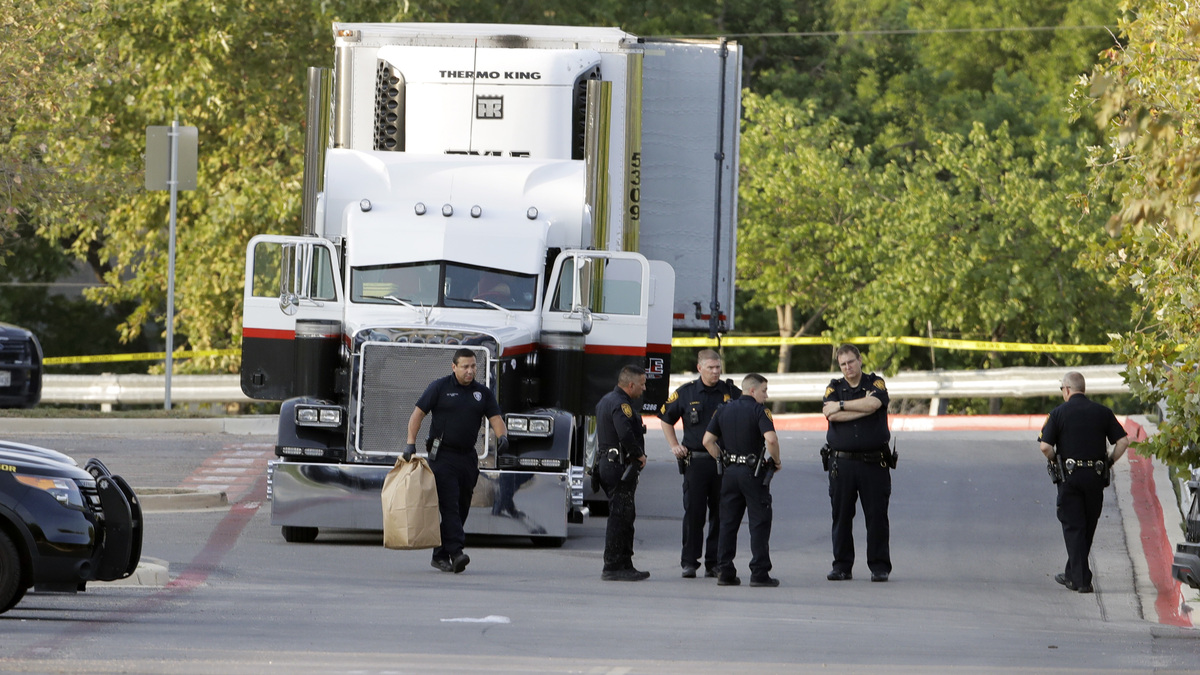 San Antonio police officers are seen in a parking lot where at least nine people were found dead in a tractor-trailer that contained at least 30 others outside a Walmart store.

At least 10 people have died after being crammed into the back of a tractor-trailer and traveling under scorching conditions, officials say, in an update on a case of apparent human smuggling.

A 60-year-old Florida man is in federal custody in connection to the case, the U.S. Attorney's Office said. The office says James Mathew Bradley, Jr., of Clearwater, Fla., will likely appear in San Antonio's federal court on criminal charges Monday.

The truck was parked in a Walmart parking lot. A total of 39 people were found inside, including two 15-year-old children. Officials had initially said 38 people were involved.

The Department of Homeland Security is currently leading the investigation.

San Antonio Police Chief William McManus said a Walmart employee called the police after a person who was in the truck was able to get out and approached the employee for water.

Twenty people in critical or very serious condition were transported to area hospitals, Fire Chief Charles Hood told reporters. Another eight people in a less severe condition were taken to another hospital, he said. He said there was no air conditioning in the trailer, leaving people "very hot to the touch." They had no water and many were suffering from dehydration and heat stroke.

"The truck was loaded with people," Hood said. He later added that emergency workers used triage techniques to help people in what he called a "mass-casualty" event.

"We treated it just like you would do an airline crash, or any kind of major incident," Hood said.

Temperatures in San Antonio reached highs of 100 degrees or more on multiple days in the past week.

After reviewing Walmart store video, "There were a number of vehicles that came in and picked up a lot of the folks that were in that trailer that survived the trip," McManus told reporters. "We're looking at a human trafficking crime here this evening."

After people in hospitals are treated, the police chief said they would be investigated by Immigration and Customs Enforcement.

He said some of the people who had been in the truck had left to the nearby woods. A search overnight did not locate any additional victims, but police said they would conduct a second aerial search once daylight broke.

Police have the truck's driver in custody and authorities don't know how long the truck was parked in the lot. "The driver and whomever else we find that's involved in this will be facing state and federal charges," McManus added.