Accessibility links
Boy Scouts Chief Apologizes For 'Political Rhetoric' In Donald Trump's Jamboree Speech : The Two-Way "We sincerely regret that politics were inserted into the Scouting program," Michael Surbaugh said. His apology came after Trump derided Obamacare and "fake media" in remarks to the National Jamboree. 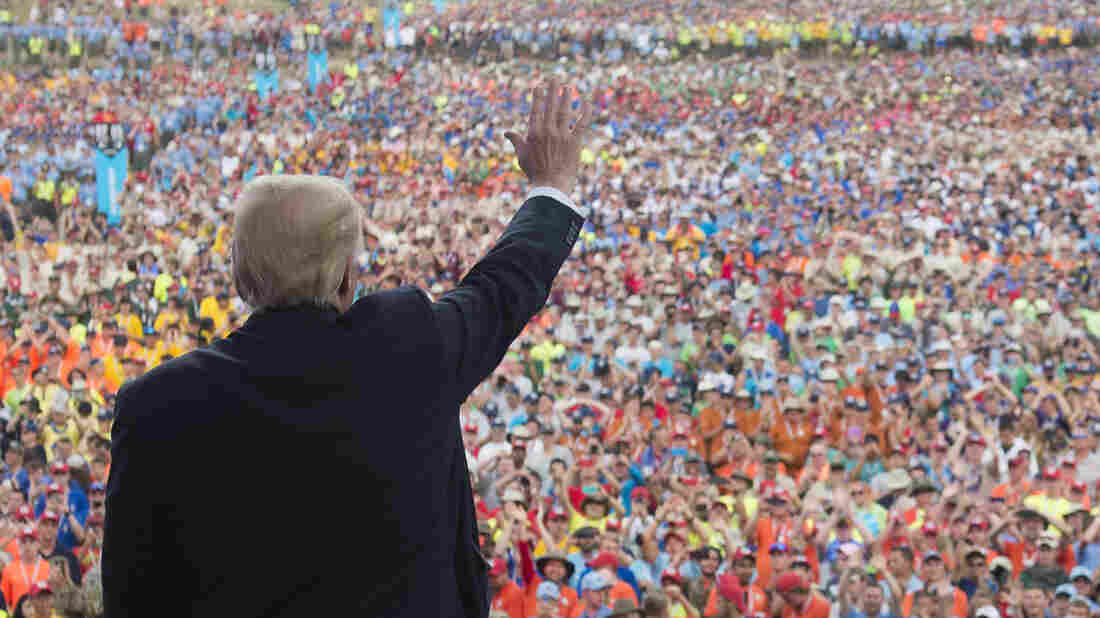 President Trump waves to the crowd after his speech during the National Boy Scout Jamboree on Monday. Saul Loeb/AFP/Getty Images hide caption 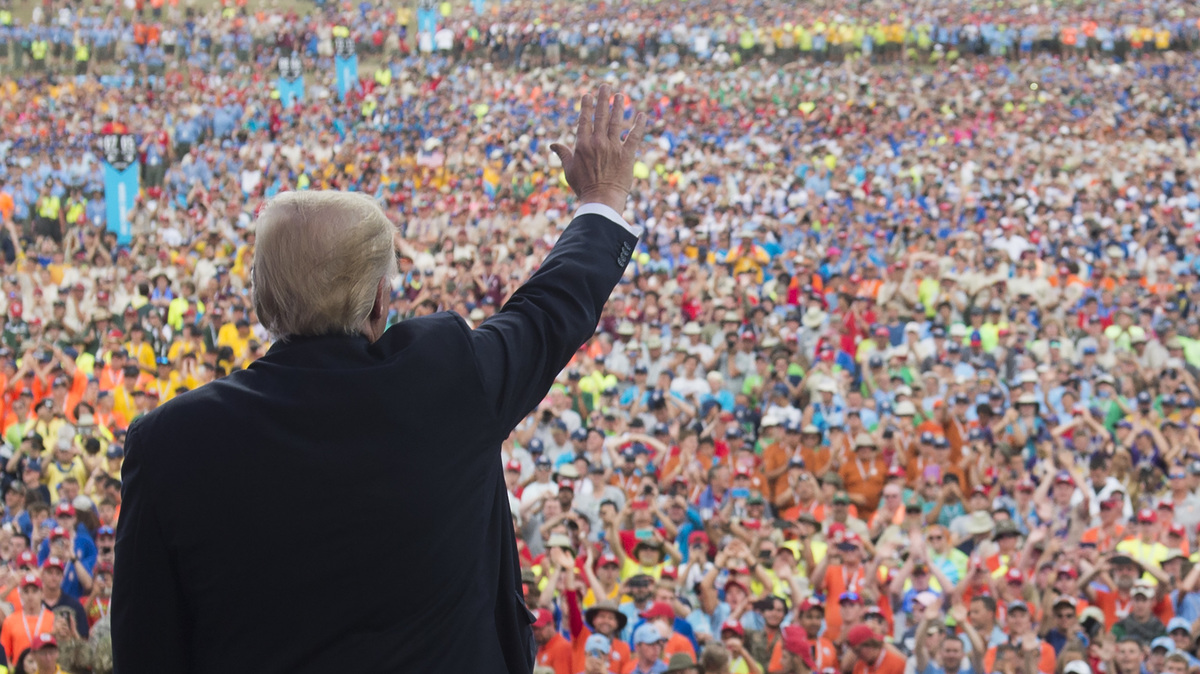 President Trump waves to the crowd after his speech during the National Boy Scout Jamboree on Monday.

The head of the Boy Scouts of America apologized Thursday to the organization's members, telling them that the group did not intend to showcase the "political rhetoric" in President Trump's speech to the National Jamboree earlier this week.

"I want to extend my sincere apologies to those in our Scouting family who were offended by the political rhetoric that was inserted into the jamboree. That was never our intent," Michael Surbaugh, the chief Scout executive for the group, wrote in a statement posted Thursday.

The speech, delivered Monday at a national gathering of Scouts, staff and volunteers in West Virginia, drew fire from critics who felt the president inappropriately brought partisan arguments to a typically nonpartisan setting — despite Trump's early promise to "put aside all of the policy fights in Washington, D.C."

In the course of Trump's remarks, the president called on his secretary of health and human services to "start our path toward killing this horrible thing known as Obamacare that's really hurting us."

Tom Price "better get Sen. [Shelley Moore] Capito to vote for it," Trump said, referencing the Republican senator from West Virginia. "He better get the other senators to vote for it. It's time. You know, after seven years of saying 'repeal and replace Obamacare,' we have a chance to now do it. They better do it. Hopefully, they'll do it."

Then, he reminisced (in detail) about his Electoral College victory in November.

But many parents, former Scouts and onlookers raised a chorus of criticism about the the contents of the speech — perhaps nowhere more loudly than in comments on the organization's Facebook page.

"As a former Scout, as well as a former employee of Philmont Scout Ranch, I am beyond appalled that the Jamboree was turned into a political rally tonight," one parent noted on Monday. "Unless the BSA condemns the President's conduct (which included bullying, name-calling, and swearing) in strong and clear terms, I will know that there is no place for my two sons in scouting."

On Thursday, Surbaugh said the invitation to Trump was not meant as an endorsement of his — or any politician's — policies.

"The invitation for the sitting U.S. President to visit the National Jamboree is a long-standing tradition that has been extended to the leader of our nation that has had a Jamboree during his term since 1937. It is in no way an endorsement of any person, party or policies," he said.

"For years, people have called upon us to take a position on political issues, and we have steadfastly remained non-partisan and refused to comment on political matters. We sincerely regret that politics were inserted into the Scouting program."

And he called for the Boy Scouts to play a role in political healing.

"In a time when differences seem to separate our country, we hope the true spirit of Scouting will empower our next generation of leaders to bring people together to do good in the world."

Asked about Surbaugh's statement Thursday, White House press secretary Sarah Huckabee Sanders said she had not seen it — but did note that on Monday, she saw "probably one of the most energetic crowds I've seen in front of the president."

"I was at that event, and I saw nothing but roughly 40,000 to 45,000 Boy Scouts cheering the president on throughout his remarks," she said, "and I think they were pretty excited that he was there and happy to hear him speak to them."