Accessibility links
Jordan Begins To Scrap Law Allowing Rapists To Evade Punishment By Marrying Victim : The Two-Way A parliamentary vote, widely welcomed as a step forward for women's rights, came after an emotional debate. Some lawmakers argued that marriage can erase the stigma of being a rape victim. 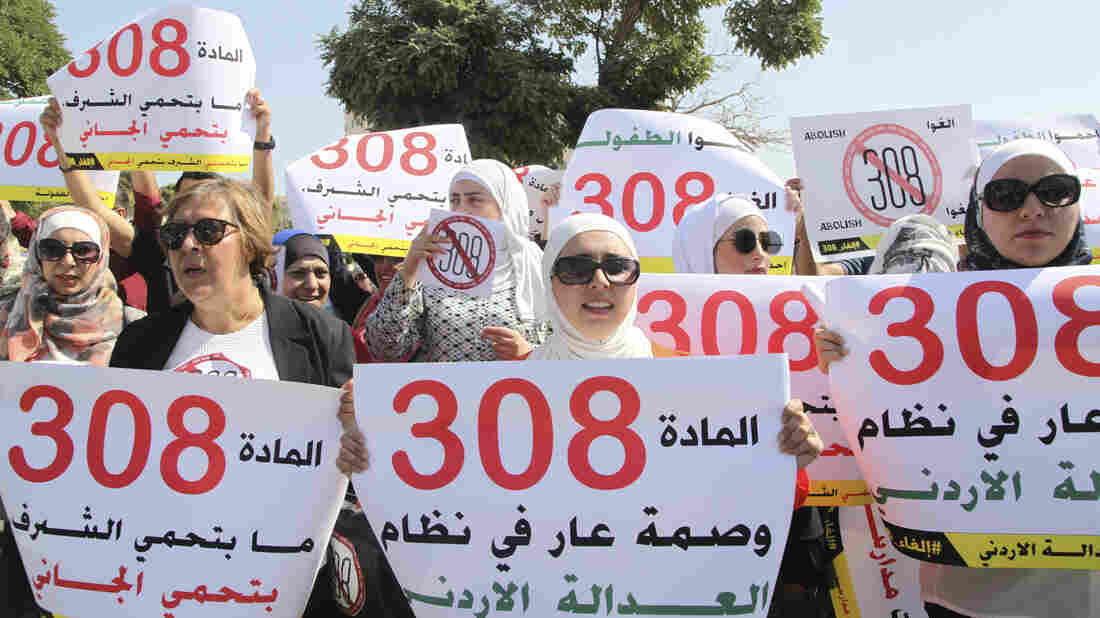 Activists protest in front of Jordan's parliament in Amman on Tuesday, as legislators voted to repeal a provision that allows a rapist to escape punishment if he marries his victim. The banner in the middle reads, "Article 308 is a disgrace in the Jordanian justice system." The banner on the left says "Article 308 does not protect honor, it protects the culprit." Reem Saad/AP hide caption 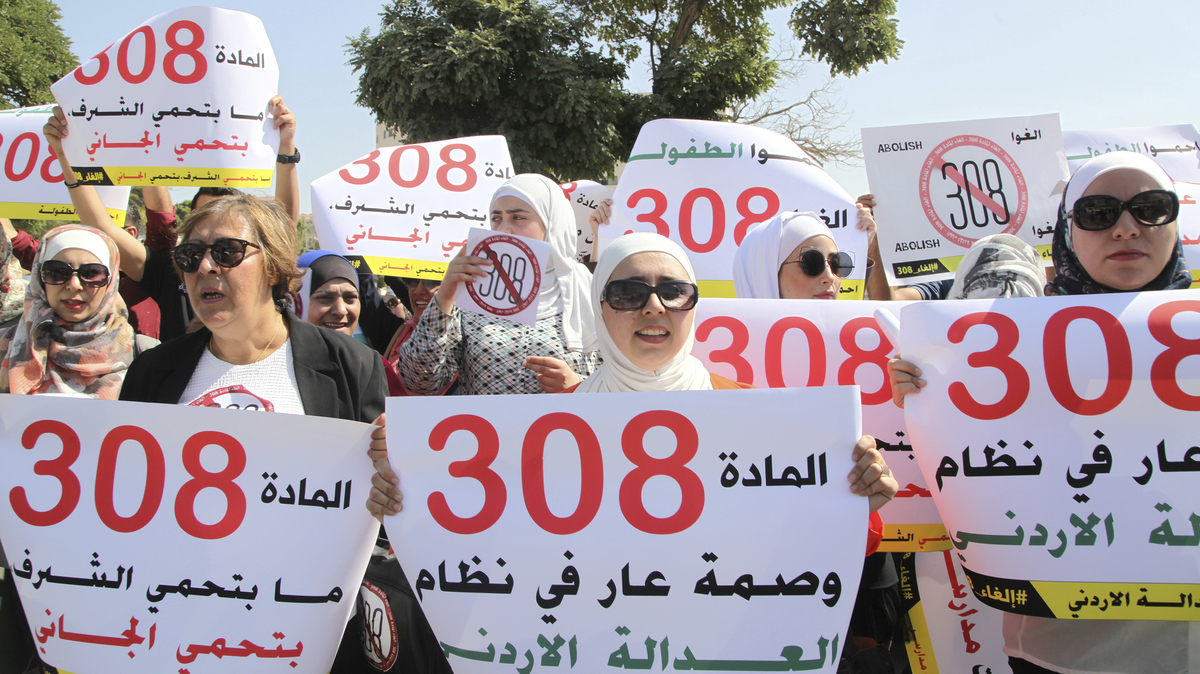 Activists protest in front of Jordan's parliament in Amman on Tuesday, as legislators voted to repeal a provision that allows a rapist to escape punishment if he marries his victim. The banner in the middle reads, "Article 308 is a disgrace in the Jordanian justice system." The banner on the left says "Article 308 does not protect honor, it protects the culprit."

Jordan's lower house of parliament has voted to scrap a law that allowed rapists to escape punishment by marrying their victims.

The move, widely welcomed as a step forward for human rights in the country, is strongly supported by the Cabinet and a royal committee on legal reforms. So while it still needs approval from the upper house of Parliament and from King Abdullah II, the passage by the lower house essentially guarantees the law will be scrapped.

"The lower house of parliament narrowly passed the new measure after an emotional debate. Parliament usually rubber stamps laws supported by the palace but this one is controversial:

"According to tribal and social customs in a lot of Jordan, if a girl or a woman is raped, it reflects on the victim and harms her family's honor. Forcing her to marry the rapist is used as a solution. Some of the lawmakers opposed to changing the law said being married would erase the stigma of rape.

"Egypt, Tunisia and Morocco are among other Arab countries that have already repealed similar laws. Human Rights Watch says Lebanon is considering changing its own laws."

The Los Angeles Times reports that the "long-reviled" law in question, Article 308, allowed rapists who married their victim within 3 years to escape prison:

"The law was amended last year to allow a rapist to marry a victim only if she was between the age of 15 and 18 and if the act was consensual. The cases were classified as rapes even if the sex was consensual because of the girl's age. ...

"According to Jordan's Ministry of Justice, 159 rapists avoided punishment by marrying their victims from 2010 to 2013. The government, [activist Asma] Khader said, stopped reporting figures after 2013 to avoid controversy. Victims' advocates say cases of rape are underreported in Jordan's conservative society, as they are many places."

Some lawmakers, and at least one social worker, wanted to keep a version of 308 in place, arguing such marriages could protect rape victims from honor killings, or give them the "choice" to escape stigma, the Times reports.

Meanwhile, other women's rights activists emphasize the need to change any mindset that would make rape bring shame on the victim, let alone a death sentence.

Just a few days ago, The Associated Press reports, Jordan's parliament moved toward another reform advancing women's legal rights. The lower house voted to close "a legal loophole that had given courts the discretion to impose sentences of as little as six months on those who killed female relatives in the name of 'family honor.' "

"Under the new amendment, killing 'in a fit of rage' can no longer be considered a mitigating circumstance in such cases," the AP writes.