Accessibility links
Zuma Survives (Another) No-Confidence Vote In South Africa's Parliament : The Two-Way It's the sixth time South African President Jacob Zuma has faced a possible vote of no confidence — and for the first time, the vote was held by secret ballot. 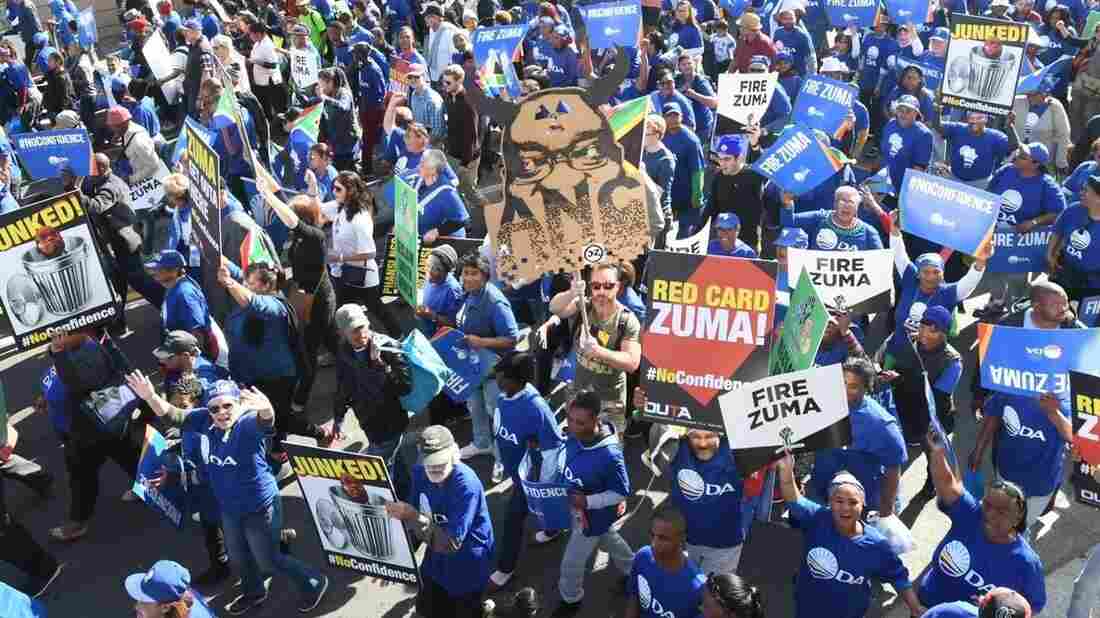 Supporters of the opposition Democratic Alliance march against President Jacob Zuma ahead of the motion of a no confidence vote against him in Cape Town, South Africa. Brenton Geach/Getty Images hide caption 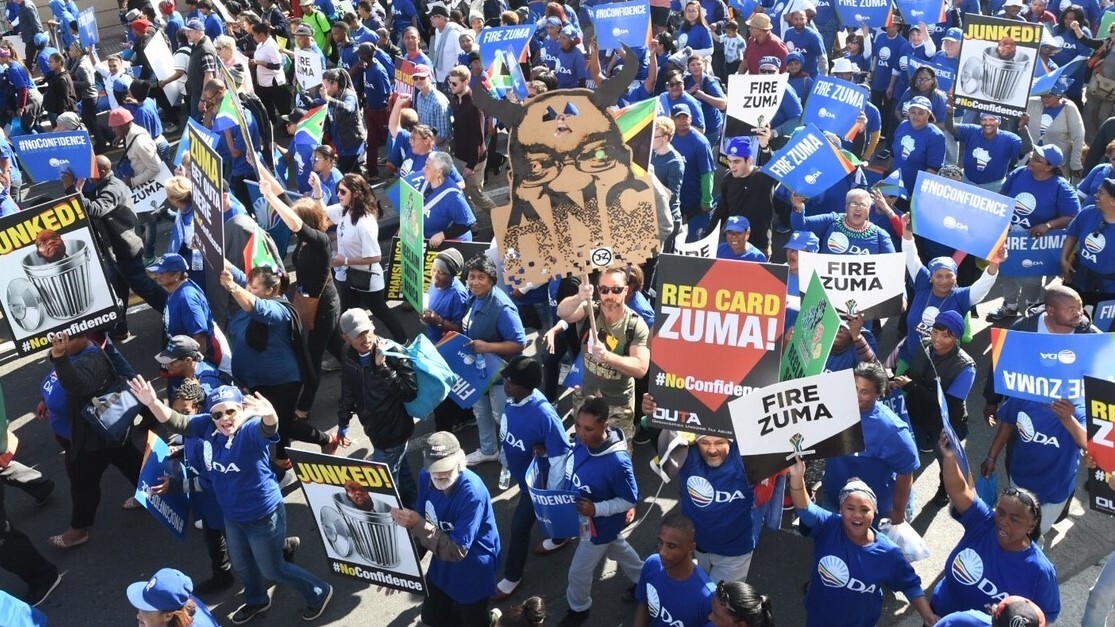 Supporters of the opposition Democratic Alliance march against President Jacob Zuma ahead of the motion of a no confidence vote against him in Cape Town, South Africa.

South African President Jacob Zuma survived the sixth push for a vote of no confidence Tuesday — and for the first time, the vote was held by secret ballot. The embattled Zuma's African National Congress party, which controls Parliament, overcame speculation that a secret vote might prove to be his undoing.

The final vote was 198 to 177, with nine abstentions. The motion of no confidence would have needed 201 votes to remove Zuma from office.

Debate over the measure began at 2 p.m. local time (8 a.m. ET) Tuesday, in a session that was also streamed online. Outside Parliament, protesters gathered to await word of the results.

After roughly two hours of spirited debate, National Assembly Speaker Baleka Mbete asked for a voice vote. After a chorus of shouts responded to each call for votes in favor and against, she pronounced, "I think the 'no's' have it."

But at that point, a call came to hold the vote by secret ballot, as had been planned.

Business was then halted to allow the installation of four large white voting booths on the floor of the chamber, to allow members to cast their votes on the no-confidence motion.

Some 40 minutes later, Mbete ordered the doors to be locked so that the vote could proceed. Members then filed to the four booths as their names were called, to collect a ballot and choose from three options: either "no" or "yes" — or to abstain.

The vote was halted more than once, as members of Parliament objected to cameras in the gallery. In the end, staff were sent to escort media agencies' photographers from the gallery.

"Vote with your conscience and remove this corrupt and broken president from office," said Mmusi Maimane, who leads the opposition Democratic Alliance party, early in Tuesday's session.

In a speech that ended with applause and handshakes, Maimane added, "I plead you: Let us put the people of South Africa first and vote to remove Jacob Zuma today."

When it was his turn at the podium, Zuma's ANC ally Pule Mabe called today's vote "yet another frivolous and fruitless motion."

"Our movement, the ANC, has led the charge in liberating the people of South Africa and leading the rest of society to a right path," Mabe said. "This motion is nothing else but a test of character."

As Peter Granitz reports for NPR from Pretoria, the use of a secret ballot meant that "hesitant members of Zuma's African National Congress could break rank without fear repercussions from the party. Opposition parties [needed] to poach about 50 ANC members to vote with them and oust the president from office. That's a heavy lift."

In the end, the opposition got some 40 votes from ANC members.

The numerous attempts to dislodge Zuma from office have led to some confusion over how many no-confidence votes he has faced. According to the website Africa Check, three motions to remove Zuma have gone to a vote; the remaining two failed because they were either withdrawn or amended.

Zuma has long been dogged by accusations of corruption. As Tuesday's vote arrived, South Africans are also suffering from a rocky economy: The country's credit rating was dropped to a junk rating this spring, and the unemployment rate is nearly 28 percent.

And this summer, leaked emails described how Zuma's son, Duduzane Zuma, had avoided charges over a fatal car crash in which his Porsche wrecked a taxi. Two women who had been in the taxi died after that crash.

Speaking in Parliament on Tuesday, the leader of the opposition Economic Freedom Fighters, Julius Malema — who, like his fellow members, was dressed in red — said his party's goal wasn't to remove a democratically elected leader.

The ANC's Nathi Mthethwa, the minister of arts and culture, said that his party would resolve its problems on its own, and he called on Parliament to resist what he called an attempt at a coup d'etat.

To those who had called for today's vote, he added, "the ANC will not be lectured by the upstarts, the startups, and some Mickey Mouse organizations like yourselves."