Accessibility links
Mormons Remove Church Leader For The First Time In Nearly 30 Years : The Two-Way James Hamula was ousted from a midlevel leadership council based on disciplinary action by the religion's highest leaders, a statement from The Church of Jesus Christ of Latter-day Saints says. 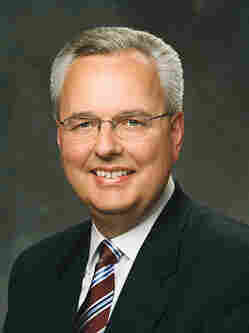 toggle caption
The Church of Jesus Christ of Latter-day Saints

Mormon church officials confirmed Tuesday that James J. Hamula, a midlevel leader, had been excommunicated. What hasn't been confirmed is why he was removed.

Hamula was released from a midlevel leadership council based on disciplinary action by the religion's highest leaders, according to a statement by The Church of Jesus Christ of Latter-day Saints.

The Utah-based church said Hamula was not removed for apostasy, according to The Salt Lake Tribune, which refers to teaching inaccurate doctrine or publicly defying guidance from church leaders.

It has been 28 years since someone among the ranks of leadership has been excommunicated from the LDS church — meaning they are no longer considered part of the Mormon church.

A church historian, Greg Prince, told The Washington Post that "Hamula being removed is the equivalent of a Catholic archbishop being removed from the Catholic Church."

"The last leader to be excommunicated was the late George P. Lee in 1989 after Lee, an American Indian, called Mormon leaders racist. The church said then that Lee was removed for 'apostasy and other conduct unbecoming a member of the church.'

"The last church leader removed before Lee was Richard R. Lyman, who was excommunicated in 1943 for adultery but baptized again 11 years later."