Accessibility links
Tiger Woods Expected To Enter DUI Offender Program To Avoid Conviction : The Two-Way The golfer pleaded not guilty Wednesday in a case stemming from his May arrest, but is expected to plead guilty to a lesser charge in October. 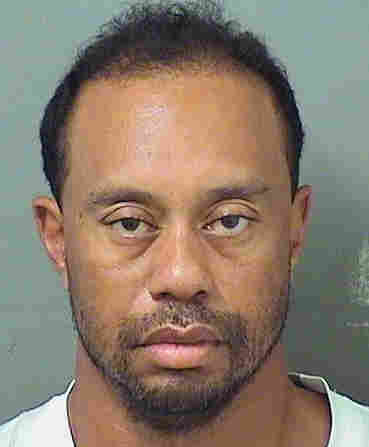 On Wednesday Tiger Woods pleaded not guilty to driving under the influence following his May 29 arrest. Palm Beach County Sheriff's Office/AP hide caption

Tiger Woods pleaded not guilty Wednesday to a DUI charge stemming from his arrest in May, when police found him asleep at the wheel of his car in Jupiter, Fla.

But Woods is expected to plead guilty to a lesser charge of reckless driving in October, reports Reuters. He will then likely enter a year-long probation program for first-time offenders involving DUI classes, community service and possible treatment. Successful completion would allow him to avoid a DUI conviction, reports the wire service, citing the prosecutor's office.

Dave Aronberg, state attorney for Palm Beach County, says defendants in the program "accept responsibility for their actions" and "have their underlying substance abuse issues addressed."

On Wednesday Woods did not appear at the North County Courthouse in Palm Beach Gardens, Fla. His lawyer Douglas Duncan entered the not-guilty plea and did not answer the questions of reporters gathered there, says Reuters.

Woods was arrested in the early morning hours of May 29, after police found him unconscious in his parked Mercedes about 15 miles from home, reports The Associated Press. The car was damaged on the driver's side but the officers who checked the area were unsure how the damage was incurred.

In a statement issued later that day, Woods said, "What happened was an unexpected reaction to prescribed medications. I didn't realize the mix of medications had affected me so strongly."

According to the police report, the 41-year-old Woods said he had taken Xanax. He passed a breathalyzer test.

The incident is the latest in a steep downfall for a man who at one time ranked as the world's best golfer. In addition to accolades and titles, Woods was one of the highest-paid athletes of all time.

But a 2009 car accident, followed by cheating allegations and a high-profile divorce cost him millions in lost endorsements.

Then numerous injuries and surgeries sidelined Woods from the sport.

Still, as recently as May, Woods sounded optimistic about his future.

"As for returning to competitive golf, the long-term prognosis is positive," Woods wrote in a blog posted a few days before his arrest. "I want to say unequivocally, I want to play professional golf again."