Accessibility links
3 Dead After Violence Linked To White Nationalist Rally In Virginia : The Two-Way One woman died when a car plowed into marchers, and Virginia State Police said two people were killed when a helicopter crashed near Charlottesville. Dozens were injured in the day's violence. 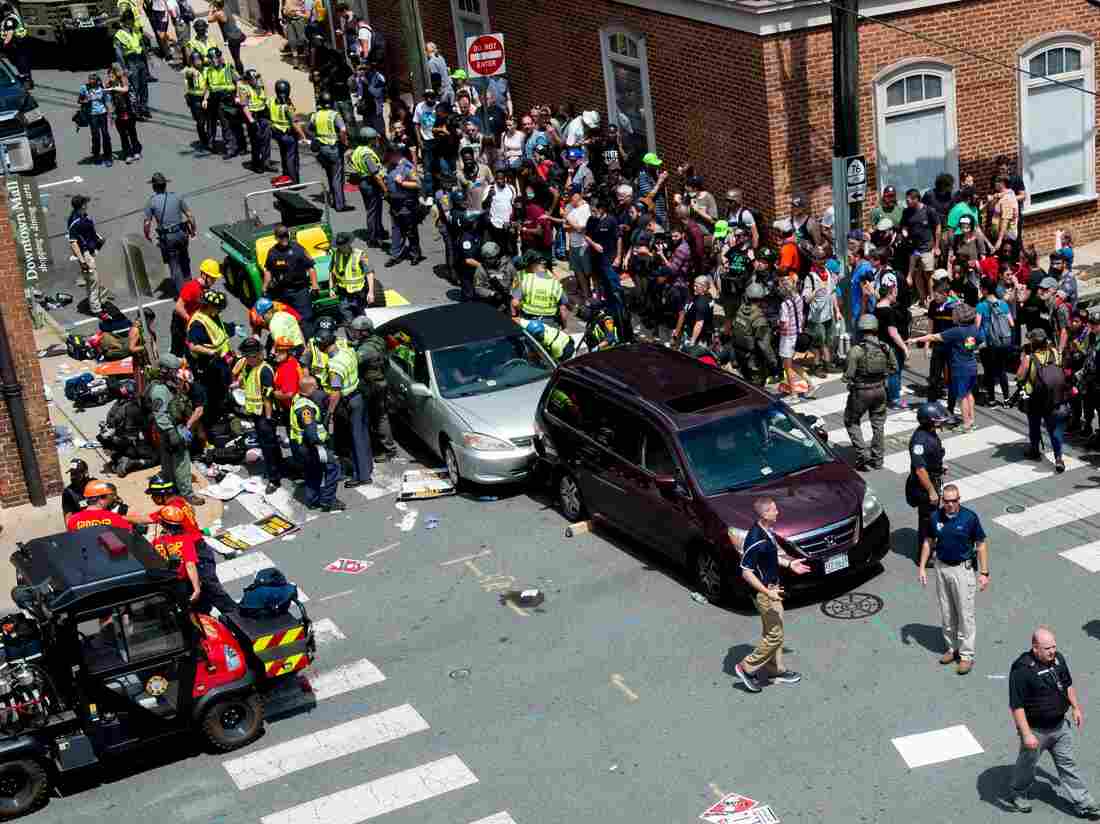 People receive first aid after a car ran into a crowd of protesters in Charlottesville, Va., on Saturday. The car struck the silver vehicle pictured, sending marchers into the air. Paul J. Richards/AFP/Getty Images hide caption 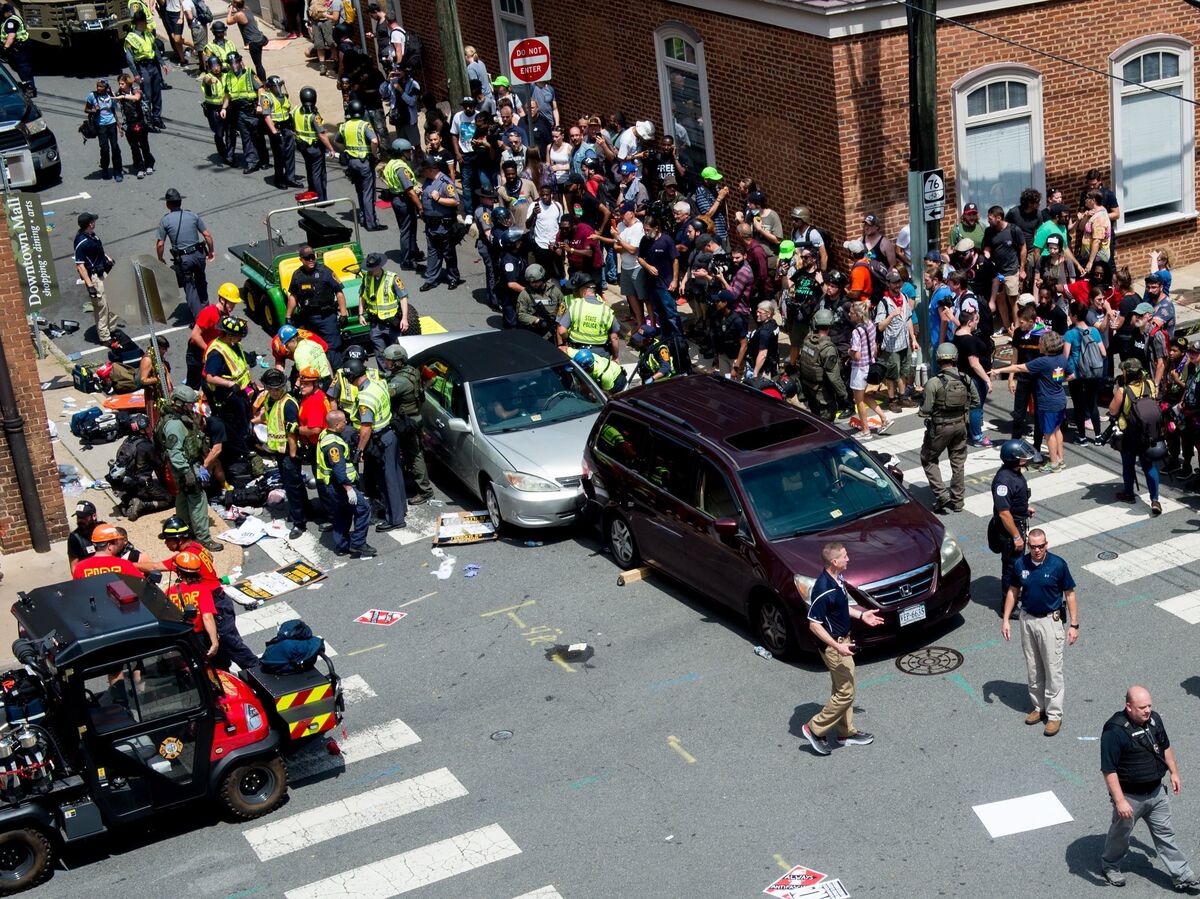 People receive first aid after a car ran into a crowd of protesters in Charlottesville, Va., on Saturday. The car struck the silver vehicle pictured, sending marchers into the air.

Three people died and about 35 were injured in a day of violence that began with clashes at a white nationalist rally on Saturday in Charlottesville, Va., Gov. Terry McAuliffe said.

One of those killed was a 32-year-old female pedestrian who was hit by a car that plowed into marchers, authorities said. The driver of the car, James Alex Fields is being held on charges including second degree murder. Police say he's from Ohio.

Virginia State Police posted on Facebook that the helicopter crash in Albemarle County, where Charlottesville is located, occurred at approximately 5 p.m.

Gov. McAuliffe, speaking at a press conference, had a strong message for the white nationalist protesters: "Go home."

He added, "You are not wanted in this great commonwealth. Shame on you. You pretend that you are patriots, but you are anything but a patriot."

In video posted to Twitter, a silver car with darkened windows can be seen speeding through the crowd and ramming another vehicle, sending people through the air. The car then goes into reverse while marchers chase it.

Police said the afternoon crash happened near the intersection of Fourth and Water streets.

Charlottesville Mayor Mike Signer tweeted that one person had died in that crash.

Warning: The video in the tweet below is graphic.

Video of driving through crowd of protesters in #Charlottesville

Photos and video show multiple people being treated for injuries, and police can be seen securing the scene of the wreck.

Folks said counter protesters were hit by a vehicle as they turned the corner. Medics are here. #Charlottesville pic.twitter.com/qQAIRy7YSN

The crash involved three cars and, in addition to the fatality, at least nine people were injured, according to the AP. 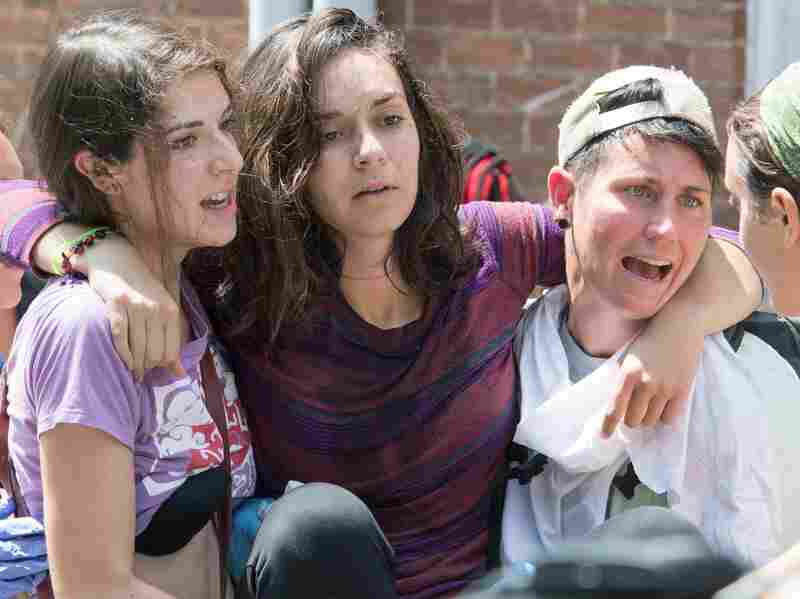 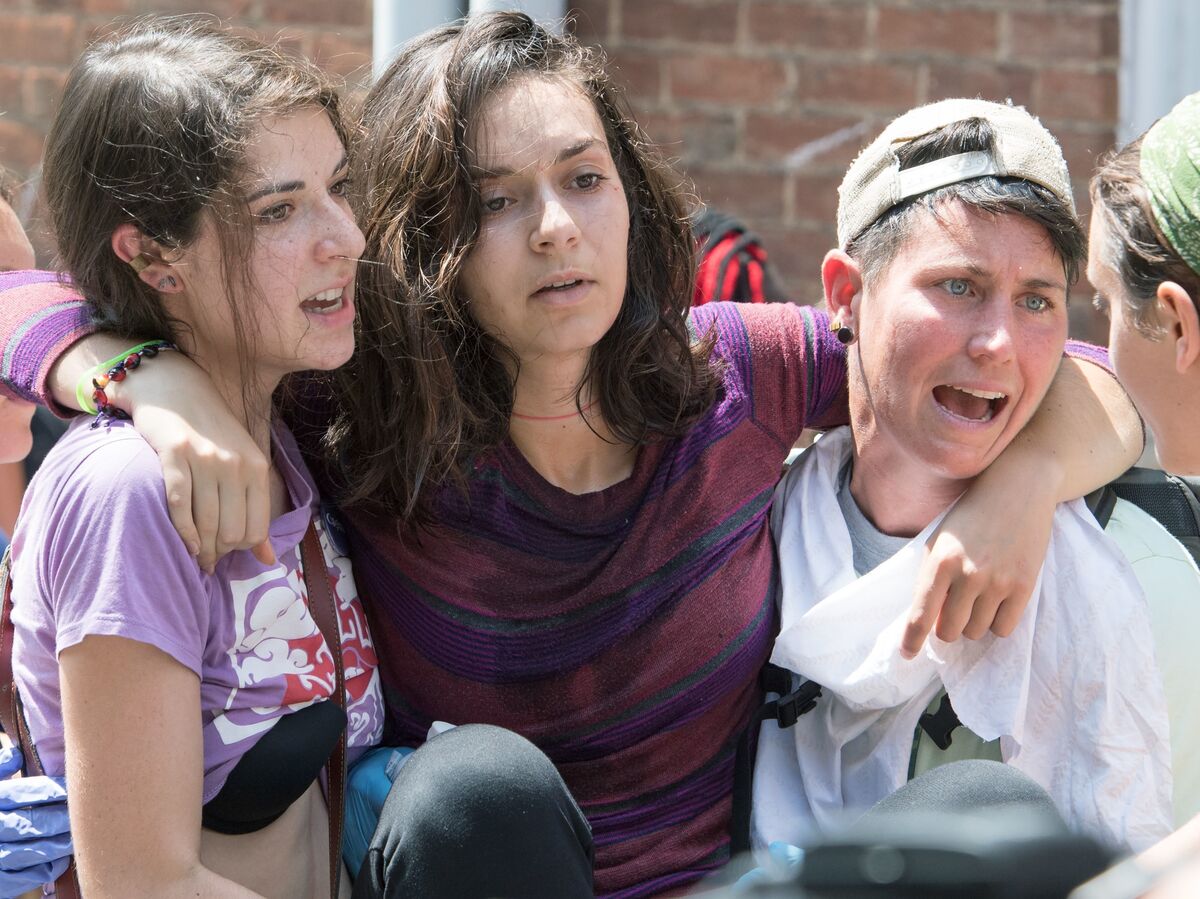 Police said the deadly crash happened near the intersection of Fourth and Water streets.

In a statement sandwiched between announcing and signing legislation to expand a veterans health care program, the president said he condemned "in the strongest possible terms this egregious display of hatred, bigotry, and violence on many sides."

Virginia's governor had earlier declared a state of emergency as a result of violent clashes involving hundreds of protesters in Charlottesville.

The move came during a white nationalist rally planned in the small college town to protest plans to remove a statue of Confederate Gen. Robert E. Lee from a city park. On Saturday morning, protesters and counterprotesters faced off, kicking, punching, hurling water bottles at and deploying chemical sprays against one another.

Approximately 500 protesters were on-site, with more than double the amount of counterprotesters, according to reporter Sandy Hausman of member station WVTF and Radio IQ. She said some injuries had been reported.

At least 2 people have been injured in violent clashes in #Charlottesville, VA ahead of a white nationalist rally https://t.co/dzg92WQnHM

Police used tear gas to disperse the crowd, before offering protesters the option of being arrested or moving to another, larger location approximately 1 mile away, she told NPR's Scott Simon on Weekend Edition Saturday.

The declaration by Gov. McAuliffe was made in order to "aid state response to violence" at the rally in the city about 120 miles southwest of Washington, D.C., and home to the University of Virginia. The city's manager also declared a local emergency and police ordered people to disperse from the area around the statue, according to the AP.

The "Unite the Right" rally was expected to draw a lot of people from out of town. It follows last month's Ku Klux Klan rally, also in Charlottesville, that drew about 50 Klan members and about 1,000 counterprotesters.

After the violent outbursts, politicians tweeted their disdain at the events in Charlottesville. Trump called on Americans to "come together as one."

We ALL must be united & condemn all that hate stands for. There is no place for this kind of violence in America. Lets come together as one!

House Speaker Paul Ryan said the views of the white nationalists were "repugnant" and called for Americans to unite against "this kind of vile bigotry."

The views fueling the spectacle in Charlottesville are repugnant. Let it only serve to unite Americans against this kind of vile bigotry.

First lady Melania Trump called for people to "communicate [without] hate in our hearts."

Our country encourages freedom of speech, but let's communicate w/o hate in our hearts. No good comes from violence. #Charlottesville

In an odd side story, many of the white nationalist marchers were seen holding signs featuring the logo of the Detroit Red Wings, a historic hockey franchise in the NHL.

An anti-immigrant group called the Detroit Right Wings features a similar logo. A Twitter account that seemed to represent the group tweeted earlier in the week about attending Saturday's rally.

As images of marchers flaunting the logo began flooding social media, the team issued a swift statement in response.

"The Detroit Red Wings vehemently disagree with and are not associated in any way with the event taking place today in Charlottesville," the team said. "We are exploring every possible legal action as it pertains to the misuse of our logo in this disturbing demonstration."

NHL Deputy Commissioner Bill Daly added in an email to the AP, "This specific use is particularly offensive because it runs counter to the inclusiveness that our league values and champions."

They're chanting "Blood and Soil" as they approach Lee Park in #Charlottesville pic.twitter.com/2hPmJv9sq0

In a Facebook post about that march, Mayor Signer wrote, "I am beyond disgusted by this unsanctioned and despicable display of visual intimidation on a college campus."

These are literally young UVA students age 17-23 standing up to a sea of white supremacists and neo-Nazis surrounding them #Charlottesville pic.twitter.com/VEU3mU9d3o

In the days leading up to Saturday's planned rally, there had been some back-and-forth about where it would be held.

The AP reported that a federal judge ordered Charlottesville to allow the rally to take place at its originally planned location downtown:

"The city announced earlier this week that the rally must be moved out of Emancipation Park to a larger one, citing safety reasons.

"Kessler sued, saying the change was a free speech violation. The judge wrote that Kessler was likely to prevail and granted the injunction."

After the ruling, The New York Times reported:

"Late Friday night, several hundred torch-bearing men and women marched on the main quadrangle of the University of Virginia's grounds, shouting, 'You will not replace us,' and 'Jew will not replace us.' They walked around the Rotunda, the university's signature building, and to a statue of Thomas Jefferson, where a group of counterprotesters were gathered, and a brawl ensued."

"As President of the University of Virginia, I am deeply saddened and disturbed by the hateful behavior displayed by torch-bearing protestors that marched on our Grounds this evening. I strongly condemn the unprovoked assault on members of our community, including University personnel who were attempting to maintain order.

"Law enforcement continues to investigate the incident, and it is my hope that any individuals responsible for criminal acts are held accountable. The violence displayed on Grounds is intolerable and is entirely inconsistent with the University's values."

City officials and police say they are prepared for any violence. Gov. McAuliffe urged Virginians to stay away from the rally and placed the National Guard on standby. The guard released a statement saying it would "closely monitor the situation."

Earlier this week, All Things Considered host Ari Shapiro reported on Airbnb's decision to make it harder for people attending the rally to find places to stay. The company canceled the accounts of people it confirmed had used its platform to book lodging for the event. It says those people defy its community standards. Rally organizers say this should be grounds for a lawsuit.

Debate over the Robert E. Lee statue in Charlottesville began when an African-American high school student started a petition more than a year ago to have it removed. Lee, who was born in Virginia, commanded Confederate forces in the Civil War from 1862 until he surrendered in 1865.

NPR's Patricia Cole and Maquita Peters contributed to this report.