Accessibility links
Charlottesville Car Attack: Who Is Accused Suspect James Alex Fields Jr.? : The Two-Way James Alex Fields Jr., who allegedly rammed a group of demonstrators, has been charged with murder and several other counts. Federal authorities say they are also opening a civil rights investigation. 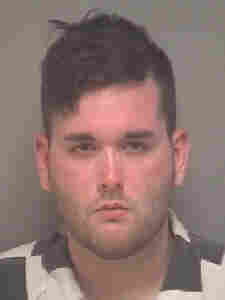 James Alex Fields Jr. is accused of ramming his car into a group of marchers after the white nationalist rally in Charlottesville, Va. Albemarle-Charlottesville Regional Jail via Getty Images hide caption 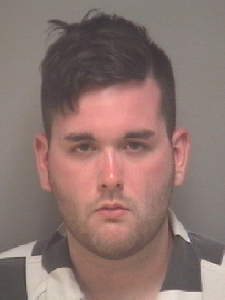 James Alex Fields Jr. is accused of ramming his car into a group of marchers after the white nationalist rally in Charlottesville, Va.

A man who appeared to be protesting Saturday with a group of self-proclaimed fascists is accused of killing a woman and injuring multiple others by driving his car into a crowd of marchers in Charlottesville, Va.

James Alex Fields Jr., 20, sped his silver Dodge Challenger into a crowd of people who had been protesting the assembly of white nationalists, white supremacists, fascists and others, according to police. Authorities say Charlottesville resident Heather Heyer, 32, was killed in the attack.

Fields has been charged with one count of second-degree murder, three counts of malicious wounding and one count related to leaving the scene of the wreck, according to The Associated Press. The FBI also says it is opening a civil rights investigation into the incident, together with the Department of Justice.

"The violence and deaths in Charlottesville strike at the heart of American law and justice," Attorney General Jeff Sessions said in a statement Saturday night. "When such actions arise from racial bigotry and hatred, they betray our core values and cannot be tolerated. Justice will prevail."

3 Dead After Violence Linked To White Nationalist Rally In Virginia

The horrific, albeit brief, attack can be seen from multiple angles via video captured by journalists and marchers and shared on social media.

A car suddenly speeds down Fourth Street Southeast, ramming into pedestrians with an audible thud, striking another vehicle from behind and sending people flying through the air and over another car near the intersection with Water Street East. The struck vehicle then hits a minivan ahead, sending that vehicle into more pedestrians. Seconds later, the car allegedly driven by Fields, reverses on Fourth Street, its front bumper dragging as people who avoided the initial attack chase after it.

Fields recently moved to Ohio from Kentucky, where he grew up, his mother, Samantha Bloom, told the AP. She said she knew he was attending a rally in Virginia but didn't know it was a white supremacist rally.

"I thought it had something to do with Trump. Trump's not a supremacist," said Bloom, who became visibly upset as she learned of the injuries and death.

"He had an African-American friend so ... ," she said before her voice trailed off. She added that she would be surprised if her son's views were that far right, according to the AP.

Bloom told a reporter with the Toledo Blade that she didn't speak with her son about his political views and that she wasn't aware of his ties to white supremacist groups. She said her son had dropped off his cat for her to take care of while he attended Saturday's rally.

Meantime, as reported on our Newscast, one of Fields' former teachers told member station WVXU reporter Bill Rinehart that as a high school student, Fields was fascinated with Nazi Germany.

Derek Weimer says he taught Fields in three classes at Cooper High School in Union, Ky. Weimer says Fields was intelligent and didn't cause trouble. But he says the quiet boy was also deeply into Adolf Hitler and white supremacy. Weimer says he did his best to steer Fields away from those interests and thought he had succeeded in doing so. On hearing about the incident in Charlottesville, Weimer said he felt that he failed as a teacher.

In a photo posted to Twitter by the Anti-Defamation League and reported by BuzzFeed, a man who appears to be Fields can be seen brandishing a black shield handed out by the self-proclaimed fascist group Vanguard America.

The group released a statement on Twitter late Saturday evening saying Fields was "in no way, a member of Vanguard America." It said the shields were handed out freely to anybody in attendance.

Fields is scheduled to appear in court on Monday.