Accessibility links
On The Internet, Everyone Knows 'You're A Racist': Twitter Account IDs Charlottesville Marchers : The Two-Way They weren't hiding their faces as they waved swastikas and shouted white supremacist and Nazi slogans. Now Internet sleuths are identifying (and misidentifying) the Charlottesville marchers. 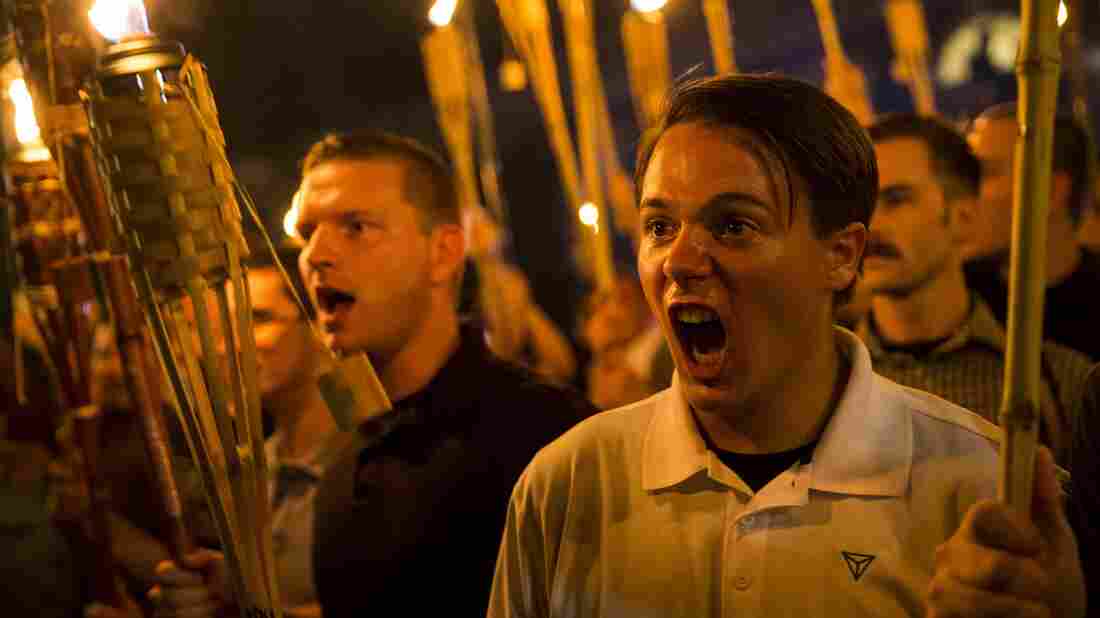 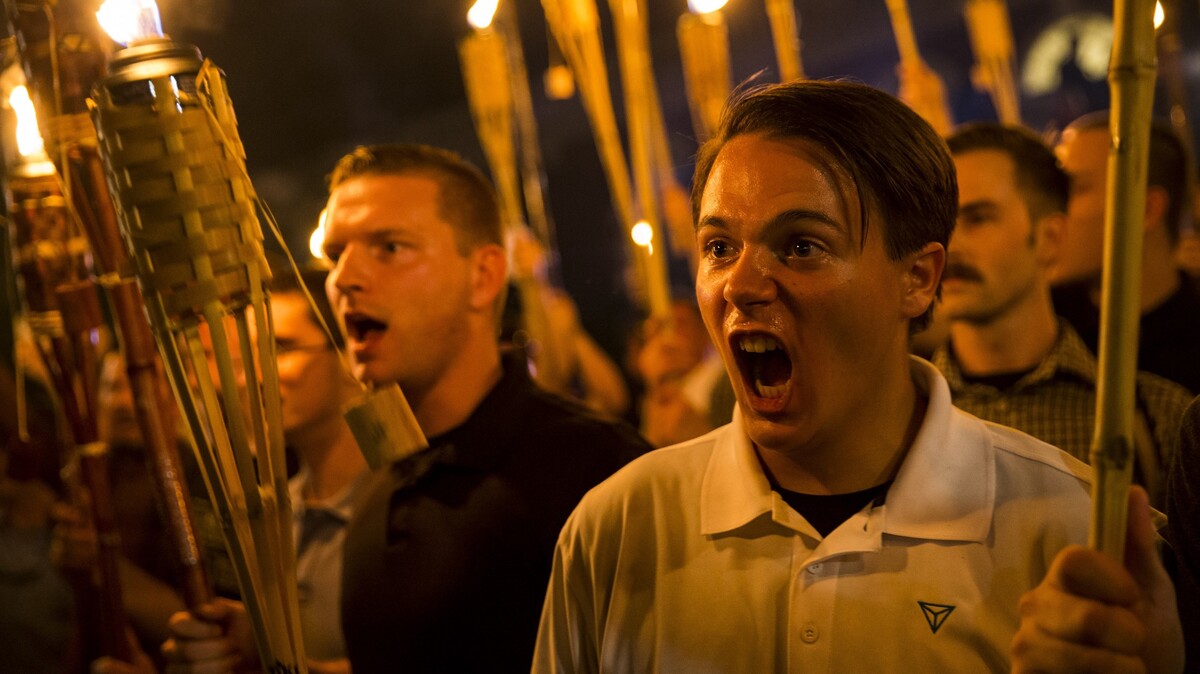 They didn't wear hoods as they chanted "Jews will not replace us." They weren't hiding their faces as they waved Confederate flags, racist signs and swastikas. They looked straight at a sea of cameras as they made the Nazi salute.

As Matt Thompson wrote for The Atlantic, the white supremacist march and rally this past weekend wasn't a KKK rally: "It was a pride march."

The bare-faced shamelessness was the point. But it was also an opening.

On the Internet, some people are crowdsourcing efforts to identify and shame the people participating in the rally. Most prominently, on Twitter, the account "Yes, You're Racist" has been soliciting help and posting IDs. "I'll make them famous," the account pledged.

If you recognize any of the Nazis marching in #Charlottesville, send me their names/profiles and I'll make them famous #GoodNightAltRight pic.twitter.com/2tA9xliFVU

So far, at least one protester is no longer employed after being publicly named and shamed.

Cole White, who used to work at a hot dog restaurant in Berkeley, Calif., "voluntarily resigned" on Saturday after his employer confronted him about his participation in the event, according to the Berkeleyside news site.

@YesYoureRacist is not a new Twitter account. Since 2012, the account has been calling out "casual racism on Twitter," according to the user's fundraising page. It would post screenshots of deleted racist tweets, highlight offensive comments by elected officials and retweet everyday users who would say: "I'm not racist but ..." followed by something, well, racist.

But after the march and rally in Charlottesville, Va., Yes, You're Racist pivoted from highlighting online remarks to identifying real-world marchers.

Many of the people it named had publicly declared their plans to go to Charlottesville. The account identified one man as "Illegal Aryan," who wrote on the white supremacist site Daily Stormer last month, "See you in Charlottesville!"

"Illegal Aryan," real name Mark Daniel Reardon, was identified by an antifascist group this spring and confirmed on Daily Stormer that he lost his job as a result.

Another identified marcher, who has repeatedly tweeted Holocaust denials and says he is a member of the Proud Boys, said on Twitter that he was at Charlottesville. After he was identified, he said he has received death threats.

Of course, there is a long and not entirely noble tradition of online humiliation for perceived moral trespasses.

Jon Ronson, who literally wrote the book on the phenomenon (it's called So You've Been Publicly Shamed), chimed in on Twitter to give his take on the public identification of the white supremacists, white nationalists and neo-Nazis marching in Charlottesville.

"They were undisguised in a massively contentious rally surrounded by the media," he said, noting also that there's "a big difference" between making a thoughtless or offensive comment online and marching in the name of white power.

That said, Twitter is "a terrible information swapping service," he said, and some innocent people would inevitably get caught up in the process.

Indeed, the "Yes, You're Racist" account has made, and acknowledged, some mistakes.

One of the photos it examined was from a previous Trump rally, not the Charlottesville march or rally. (That image featured a man wearing a Nazi armband. He said on YouTube that he wore it as a "social experiment" to prove that "not all Trump supporters are Nazis. I went to the Trump rally as a Nazi and they kicked me out and disavowed me ... I dressed up as a Nazi to prove a point, not to spread a message of hate.")

Another photo was misidentified as the white supremacist Billy Roper. Roper, who has called for non-white races to be "eliminated" or "become extinct," did not actually attend the Charlottesville event. Roper, who is vehemently anti-Semitic, objected to the fact that one of the speakers at the event works with a Jewish fundraiser.

Roper wrote on his blog that he has actively contributed to the confusion over the identity of the "Arkansas Engineering" marcher:

"Early on in the game, I decided to troll them by alternately confirming then denying that I was the person in the picture, in order to confuse the trail and distract them from the guy they were after. So, I spent the better part of the evening schooling some and gaming others."

As Roper muddied the waters, others on the Internet misidentified the man in the photo as a University of Arkansas professor, which was false.

Meanwhile, one young man who was photographed screaming at the torchlit march told a local news station that it was definitely him — but he insisted he is "not the angry racist" people see in the photo.

"As a white nationalist, I care for all people," said Peter Cvjetanovic, who is studying history and political science at the University of Nevada, Reno.

"I did not expect the photo to be shared as much as it was," he told KTVN.

A "Yes, You're Racist" tweet about Peter Cvjetanovic was retweeted more than 32,000 times.