Accessibility links
Hundreds Feared Dead After Mudslide In Sierra Leone : The Two-Way Hundreds remain unaccounted for after torrential rains near Sierra Leone's capital, Freetown, caused a mountainside to collapse onto a residential community. 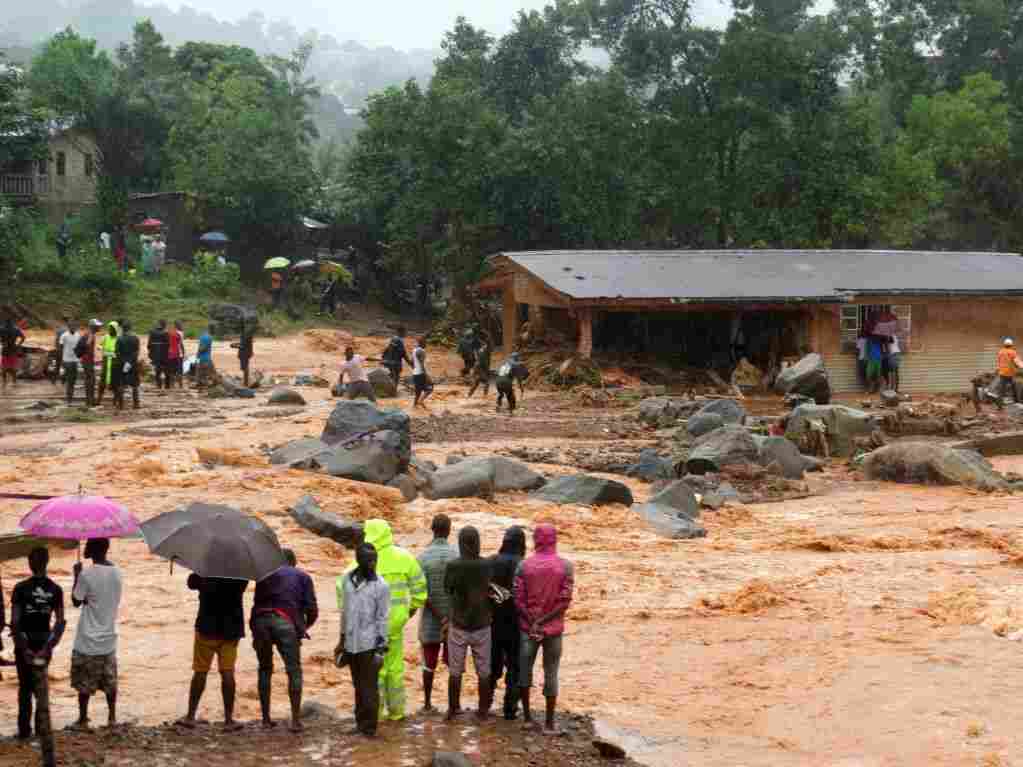 Floodwaters rage past a damaged building on the outskirts of Freetown on Monday, after mudslides struck near the capital of the west African state of Sierra Leone. AFP/Getty Images hide caption 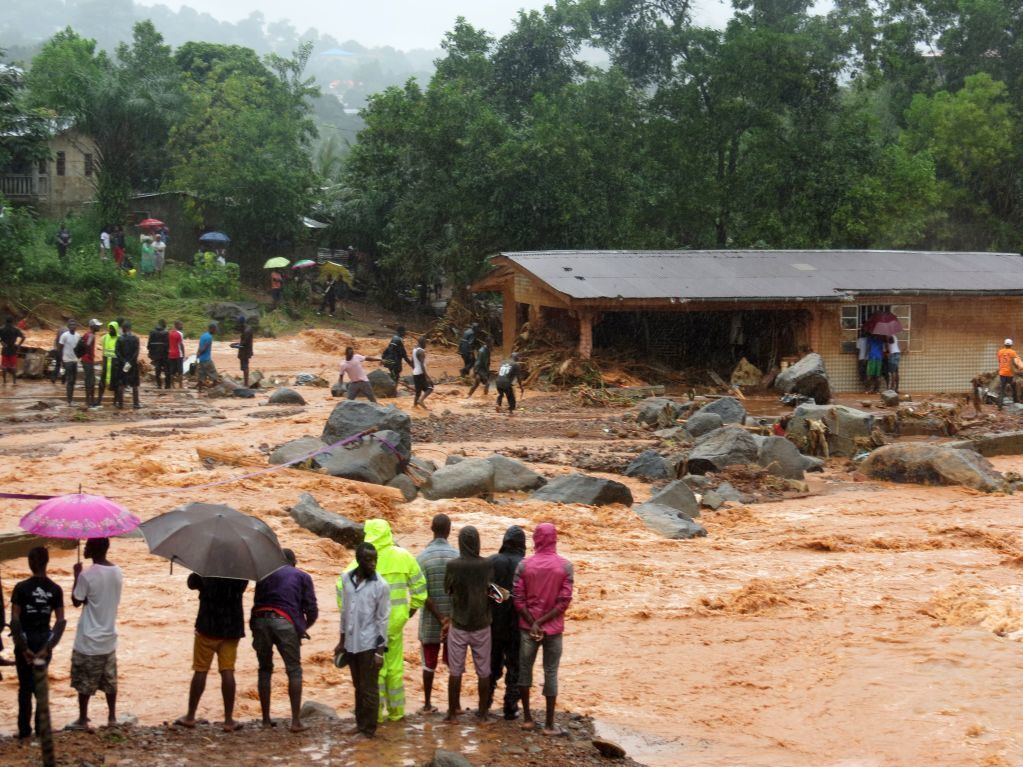 Floodwaters rage past a damaged building on the outskirts of Freetown on Monday, after mudslides struck near the capital of the west African state of Sierra Leone.

Hundreds of people are confirmed dead with hundreds more still missing after torrential rains on the outskirts of Sierra Leone's capital, Freetown, caused a mountainside to collapse onto a residential community.

Reports on the death toll have varied. The country's national broadcaster announced late Monday that the number of dead had risen above 300 and is expected to go higher. The Red Cross said in a statement Tuesday that at least 260 bodies have been recovered from the mud.

Sinneh Kamara, a coroner's technician, told The Associated Press that the mortuary at Freetown's Connaught Hospital was struggling to cope with the number of bodies brought in.

Abu Bakarr Tarawallie, the head of communications for Sierra Leone's Red Cross Society, tells The Two-Way that some 600 people remain unaccounted for as rescuers continue digging through the mountain of mud to find survivors and recover bodies.

"It is likely that hundreds are lying dead underneath the rubble," Sierra Leone's vice president, Victor Foh, told Reuters while visiting the scene of the mudslide. "This disaster is so serious that I feel myself broken. ... We're trying to cordon the area. Evacuate the people."

Tarawallie says recovery efforts face serious challenges. "We are not sure if we will be able to recover all of them considering the herculean task of reaching them out of the depths of the huge mud brought down by the slide," Tarawallie says. "We're not sure of the capacity that exists for them to be reached before they decompose."

The U.N.'s Rundown Of Some Of The World's Biggest Problems

Video posted by the Sierra Leone Broadcasting Corporation shows strong, churning rivers of mud flowing down streets and through houses. "It appears many people were still sleeping when heavy rains triggered the mudslide which engulfed the area," NPR's Ofeibea Quist-Arcton reported.

The damage is extreme, says International Federation of Red Cross and Red Crescent Societies Programme Coordinator Abdul Nasir. "In places, entire communities seem to have been washed away and whatever is left is covered in mud," he said.

Up to 3,000 people are believed to have lost their homes, Tarawallie says. "It is estimated that over 100 houses are affected, and about 25 houses were submerged in the mud."

Efforts to aid the people who have lost their homes have been "a little bit chaotic," he says. "No organized structure or shelter has been put in place for them." He adds that the Red Cross is working on a response to help the people who have survived the mudslide.

Reuters spoke with Salimatu Bangura, who lives in the flooded area and lost her brother Monday morning. "We were asleep when we heard the noise of one of the walls falling down. By the time we got up, water was flowing in and the whole house was flooded," she said.

Tarawallie stresses that Sierra Leone regularly experiences floods and mudslides because of heavy downpours. He adds: "The only particularity of this is that it is unprecedented that for the first time we are having this magnitude of impact and huge loss of property and lives."

According to the wire service, deforestation and poor urban planning have exacerbated the dangers in Sierra Leone during the rainy season.

"There is little to no urban planning going on in the city at all levels of society," Jamie Hitchen of the Africa Research Institute told The Guardian. "The government is failing to provide housing for the poorest in society. There is a chronic housing deficit in the city and the issues only get discussed on an annual basis when flooding happens and [it] comes into the spotlight."