Accessibility links
'This Is Just The Beginning Of Heather's Legacy': Mourning And A Call To Action : The Two-Way Friends and family remembered the passion of Charlottesville victim Heather Heyer. "Carry Heather's spark," her mother told listeners and mourners. "Find a way to make a difference in the world." 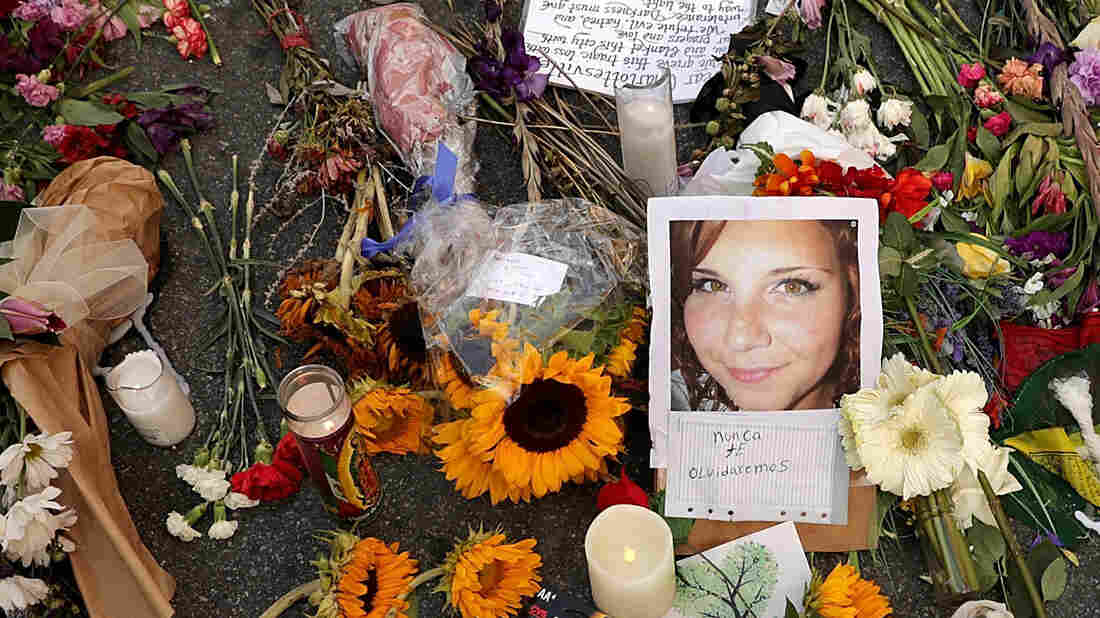 Flowers, candles and chalk-written messages surround a photograph of Heather Heyer on Wednesday, on the spot in Charlottesville, Va., where she was killed and 19 others injured by a car attack on Saturday. Chip Somodevilla/Getty Images hide caption 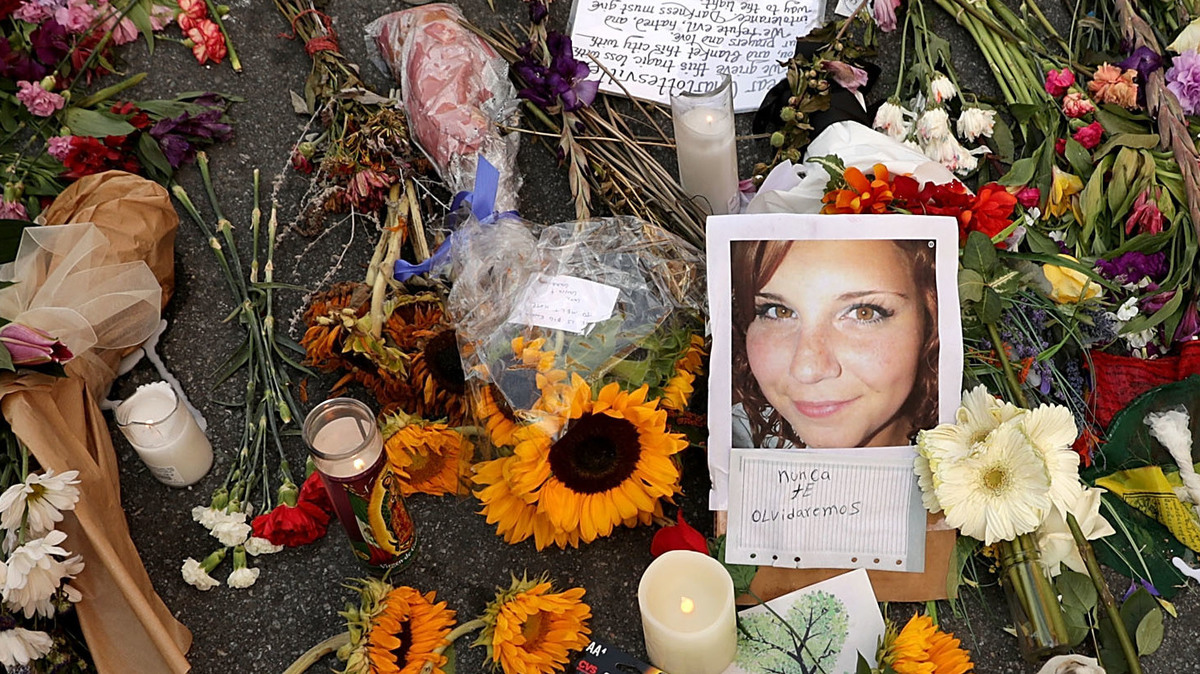 Flowers, candles and chalk-written messages surround a photograph of Heather Heyer on Wednesday, on the spot in Charlottesville, Va., where she was killed and 19 others injured by a car attack on Saturday.

At a theater in Charlottesville, Va., the mother of Heather Heyer issued a rallying cry.

"They tried to kill my child to shut her up," Susan Bro said. "Well, guess what. You just magnified her."

"She paid attention. She made a lot of us pay attention," Bro said. "I want you to pay attention. Find what's wrong — don't ignore it, don't look the other way. You make a point to look at it and say to yourself, 'What can I do to make a difference?' "

Bro had struggled to climb the stairs to the lectern where she spoke. As she slowly made her way toward the microphone, she told the crowd she'd aged 10 years in the past few days. But once there, she stood resolute, gazing out at the crowd, telling mourners and all other listeners they needed to "carry Heather's spark" and confront injustice with "righteous action."

Heyer, 32, was killed on Saturday, as she was demonstrating against a white supremacist rally. Police say James Alex Fields Jr., who marched with fascists on Saturday and reportedly had a longstanding interest in white supremacy, intentionally drove his car into a crowd of anti-racist protesters. 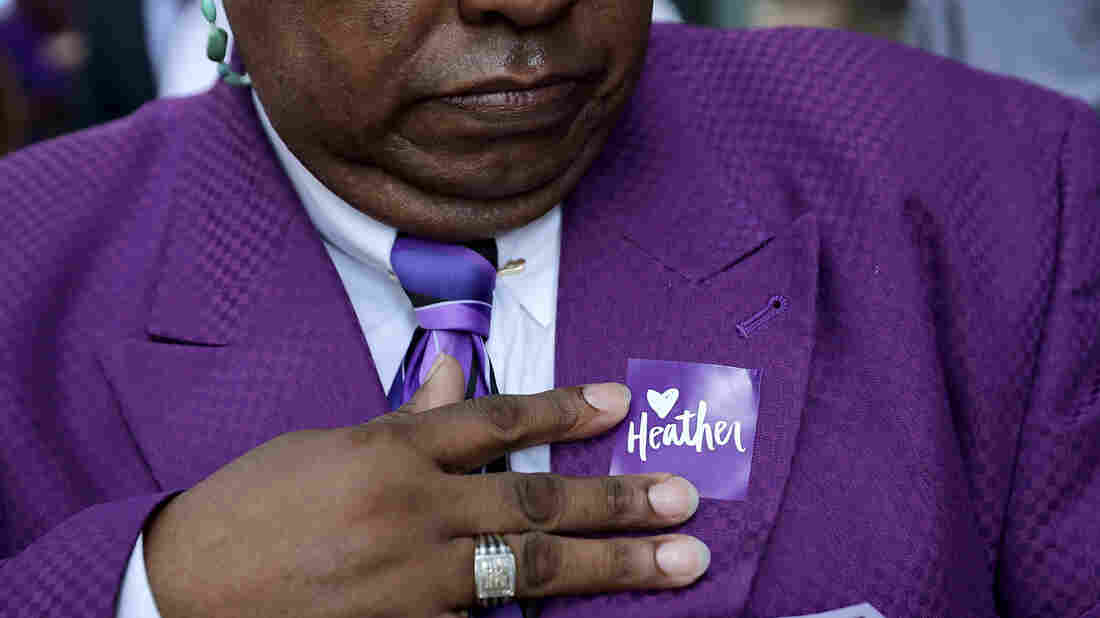 People attend the memorial service for Heather Heyer in Charlottesville, Va., on Wednesday. Heyer was killed on Saturday when a man, identified by police as a neo-Nazi supporter, drove his car into a crowd of people protesting against a white supremacist rally in Charlottesville. Chip Somodevilla/Getty Images hide caption 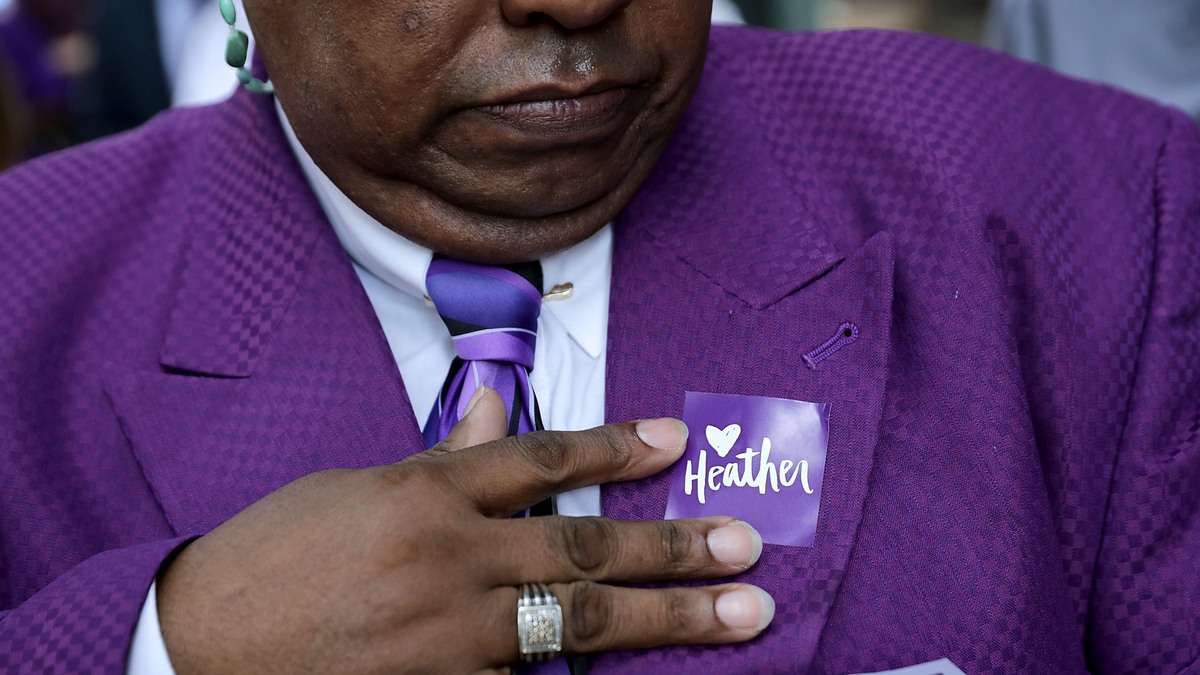 People attend the memorial service for Heather Heyer in Charlottesville, Va., on Wednesday. Heyer was killed on Saturday when a man, identified by police as a neo-Nazi supporter, drove his car into a crowd of people protesting against a white supremacist rally in Charlottesville.

At Heyer's memorial on Wednesday, friends and family remembered her longstanding passion for equality (and argument). Her grandfather remembered her childhood energy, her cousins and coworkers praised her kindness and patience, and her mother celebrated Heather's "spark of conviction."

The ceremony was held in the Paramount Theater. Bro told the crowd they'd considered a small family event, but "that's not the way Heather was. Had to have the world involved, because my child, she's just that way."

A Look Into The Life Of Charlottesville Victim Heather Heyer Aug. 13, 2017

Heather's family asked the memorial attendees to wear her favorite color, purple, in her honor.

Heyer's grandfather, Elwood Shrader, remembered the little girl he used to carry in a backpack:

"In earlier years she wanted fairness. She wanted justice. She wanted everybody to get equal respect. And with an older brother, that got tough, because older brothers are going to get more privilege, you see, and she'd watch like a hawk and call that out ... 'Why can't I do that?' ... We had a lot of fiery discussions. She wanted to understand your viewpoint; it didn't seem right to her but she insisted on knowing your viewpoint. ...

"Is this the little girl I carried? Yes, I think so. That same passion ... that same girl, you've met her. You who knew her as an adult, you know her, too."

"No father should have to do this. But I love my daughter, and as I look at all you guys — you loved her, too. She was kind of hard that way, hard not to love. ...

"As I listened to her friends ... and hear stories of my daughter and the way she was, she loved people, she wanted equality, and in this issue, of the day of her passing, she wanted to put down hate. And for my part, we just need to stop all this stuff and just forgive each other. I think that's what the Lord would want us to do is just to stop — to love one another.

"I came here today and I was overwhelmed. I was overwhelmed at the rainbow of colors in this room. That's how Heather was. It didn't matter who you were or where you were from, if she loved you that was it — you were stuck. So for that I'm truly proud of my daughter."

"You never had a problem having the conversation, saying what needed to be said, even when it was uncomfortable. ... You didn't let other people tell you how to think, how to feel, how to behave.

"When my children ask me who I admired most I will tell them you, my baby cousin, who was larger than life and too good for this world."

Alfred Wilson, her supervisor, remembered the moment five years ago when he decided to hire Heather as a paralegal:

"As I sat down to interview her, as I was talking to her, she pointed out to me, 'I just have a high school degree, I'm just a waitress — I've never worked in an office before, I don't know how to type, but I'll do my best.' ...

"She didn't believe how good she was. She was constantly trying to remind me she's 'just a waitress' and I told her, 'No, you're a paralegal and you're damned good at your job.' "

Wilson also said that Heather once ended a relationship with a man who had expressed surprise that she "worked for a black man" — that is, that she worked for Wilson. "She was always there for everyone," he said. "She believed in each and everyone of us."

And Heather's mother said that mourning — and even forgiveness — was not enough.

"Here's the message: Although Heather is a caring and compassionate person, so are a lot of you. A lot of you go that extra mile. ... We know that what she did was achievable.

"So here's what I want to happen. You asked me what can you do, so many caring people ... I want this to spread. I don't want this to die. This is just the beginning of Heather's legacy. This is not the end of Heather's legacy. You need to find in your heart that small spark of accountability: 'What is there that I can do to make the world a better place, what injustice do I see and want to turn away?' ... You poke that finger at yourself like Heather would have done and you make it happen. You take that extra step. You find a way to make a difference in the world.

"My child had a high school education. She was no saint; she was hard to raise because everything was a negotiation, but you know what? She was a firm believer in whatever she believed. And let's do that. Let's find that spark of conviction, let's find in ourselves that action, let's spread this. Let's have the uncomfortable dialogue. It ain't easy. ... It's not all about forgiveness. ... The truth is we are going to have our differences. Let's channel that difference ... that anger, not into hate, not into violence ... but into righteous action.

"The conversations have to happen. That's the only way that we're going to carry Heather's spark through."

You can watch the entire memorial below.