Accessibility links
Second Terror Attack Halted, Police Say, After 13 Killed, 100 Injured In Barcelona : The Two-Way Regional police are describing the deadly incident on a Barcelona boulevard as a terrorist attack. Hours later, police say five suspects were killed after a shootout with security forces in Cambrils. 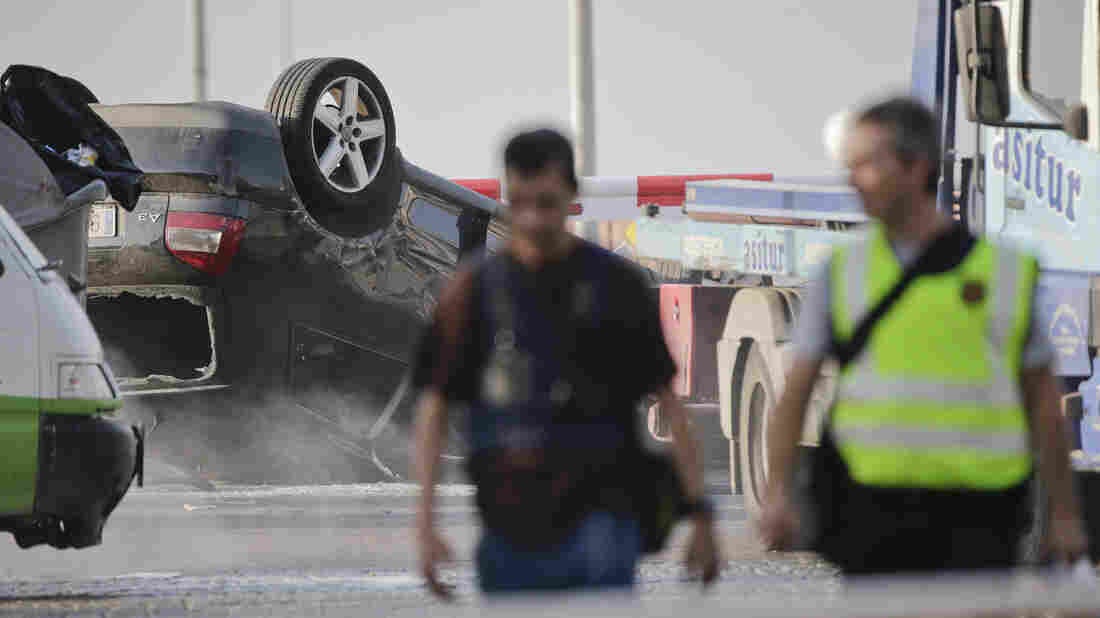 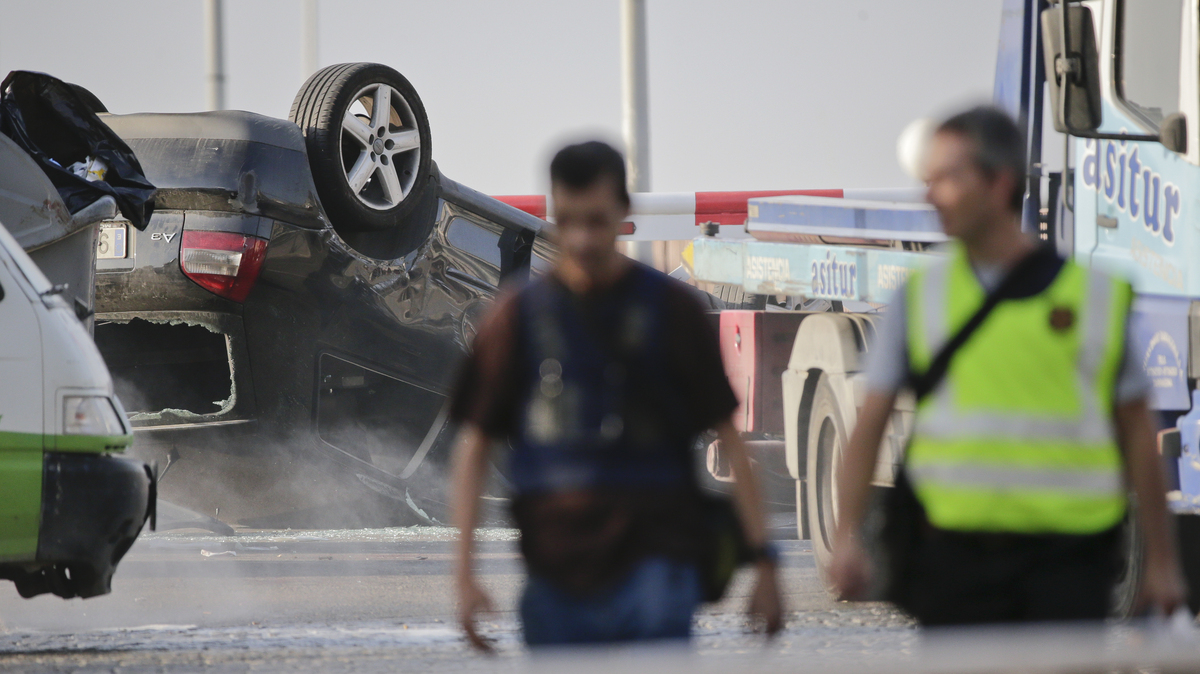 Police officers walk near an overturned car in Cambrils on Friday.

Hours after a van drove into a crowd of people in Barcelona, Spain, Spanish police say they stopped a second terrorist attack.

Police say five suspects wearing explosives — later determined to be fake — were killed after a shootout with security forces in the Catalan coastal town of Cambrils located about 70 miles southwest of Barcelona. Six civilians and a police officer were injured, police said early Friday.

By early Friday afternoon local time, police said one woman injured in the Cambrils attack had died, bringing the total number of victims killed in both attacks to 14.

Catalan police tweeted that explosive belts the five suspects were wearing were "simulated." Photos of the scene show an overturned Audi A3 with broken windows.

The shootout happened hours after the tranquility of a tree-lined pedestrian pathway was shattered late Thursday afternoon by a bloody vehicular attack that killed 13 people and prompted a manhunt. The driver's whereabouts were still unknown as of Friday morning, police say.

A white van drove into a crowd of people on the famous Las Ramblas boulevard. More than 100 more people were injured, according to the government.

The driver of the vehicle fled the scene. On Thursday, police said they detained two people who are connected to the attack — but that neither is the driver. 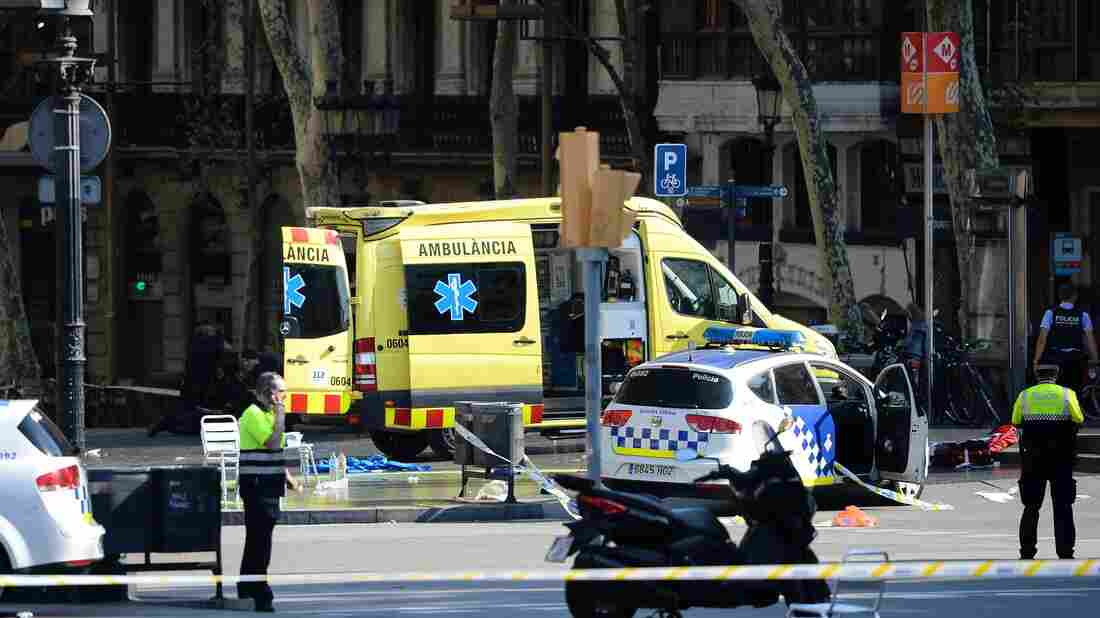 Emergency personnel cordon off the area where a van plowed into a crowd on Las Ramblas boulevard in Barcelona on Thursday. Josep Lago/AFP/Getty Images hide caption 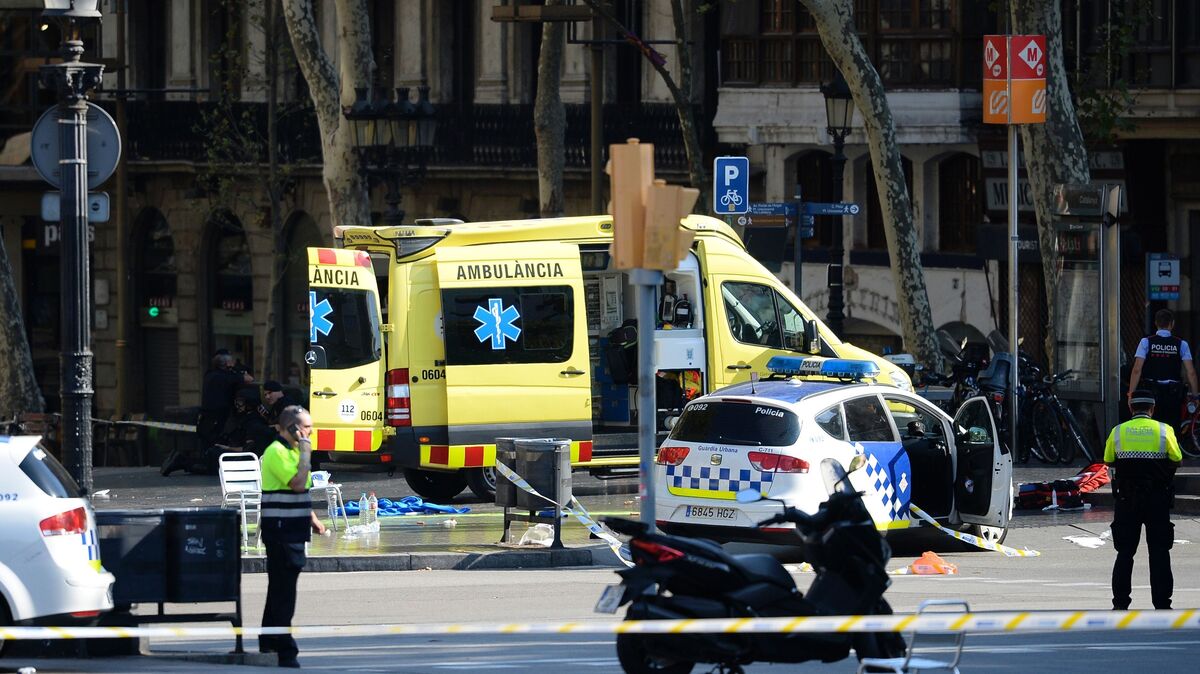 Emergency personnel cordon off the area where a van plowed into a crowd on Las Ramblas boulevard in Barcelona on Thursday.

On Friday morning, Catalan police tweeted that a third person had been arrested, in Ripoll, in relation to the attacks. Ripoll is in northeast Spain, north of Barcelona.

Spanish authorities said the van attack was also related to an explosion which killed one person Wednesday night in Alcanar, Spain, farther south from Cambrils.

The Catalan Interior Minister Joaquim Forn said the Cambrils attack "follows the same trail" as in Barcelona. "There is a connection," he told RAC1 radio, according to the AP.

A man was killed at a police checkpoint after running over two police officers, who survived, but police say there is no evidence that the incident was connected to the van attack, the BBC reports.

Regional police are describing the deadly incident on Las Ramblas boulevard as a terrorist attack but emphasized they do not know the motive.

The Islamic State has claimed responsibility for the attack, the SITE Intelligence Group reports.

As NPR previously reported, an ISIS claim of responsibility can mean a number of things. Some claimed attacks were planned by ISIS leaders, while others were planned independently. This time, the ISIS statement said that the "perpetrators" were "from the ranks of the Islamic State" and were responding to calls for attacks.

Keith Fleming, who lives in Barcelona, saw the aftermath of the attack from his balcony. He told The Associated Press that he saw "women and children just running."

The AP spoke to other witnesses:

" 'I heard a lot of people screaming and then I saw the van going down the boulevard,' another witness, Miguel Angel Rizo, told The Associated Press. 'You could see all the bodies lying through Las Ramblas. It was brutal. A very tough image to see.'

" 'At first I thought it was an accident, as the van crashed into 10 people or so and seemed to get stuck. But then he maneuvered left and accelerated full speed down the Ramblas and I realized it was a terrorist attack. He zigzagged from side to side into the kiosks, pinning as many people as he could, so they had no escape,' Laparra said." 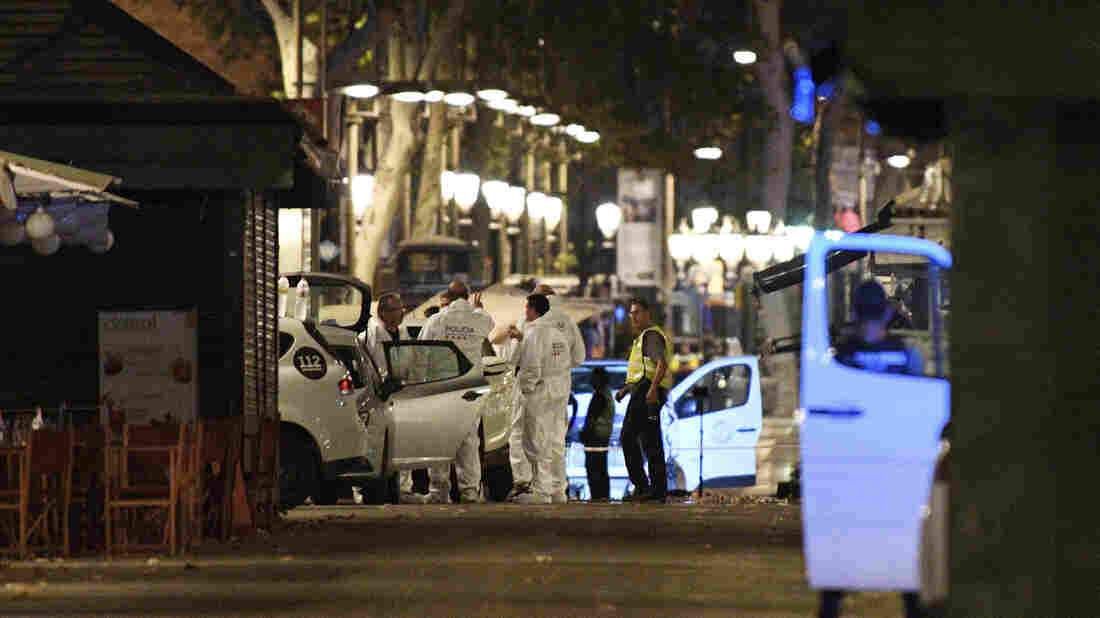 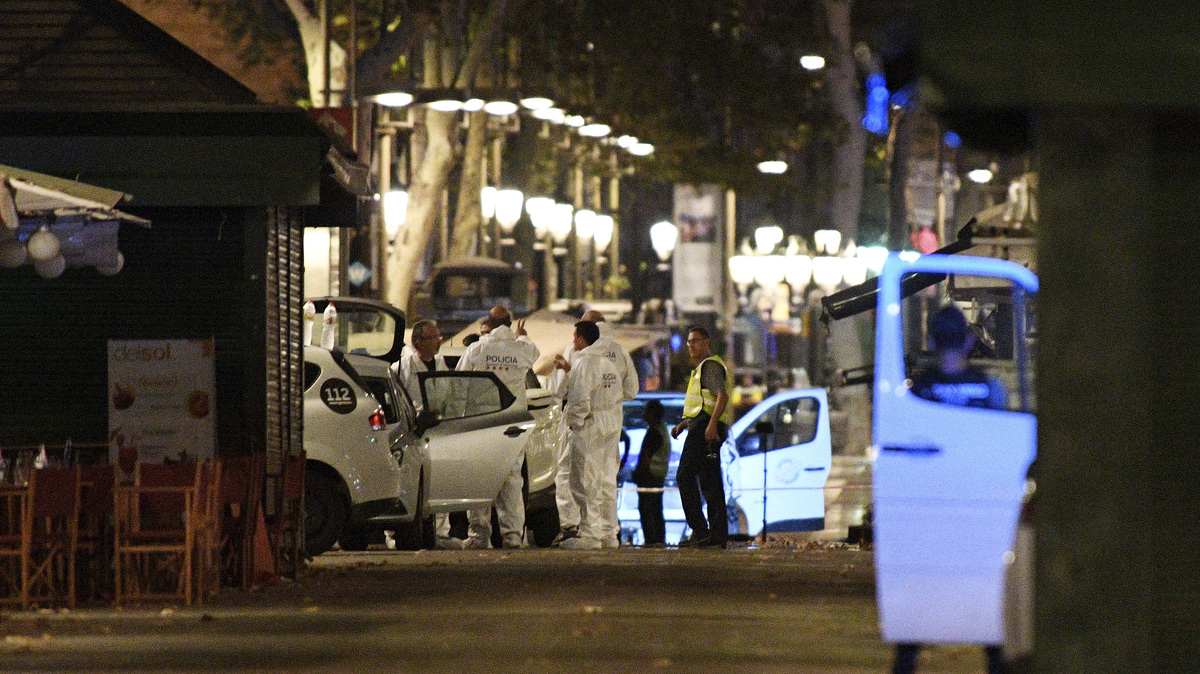 Nafees Hamid, a terrorism researcher based in Barcelona, was at the Placa de Catalunya, a major square on Las Ramblas, at the time of the attack. "I was just roaming around the area a little bit, actually just taking in some of the summer buzz here in Barcelona," he told NPR. "I just saw people running ... hundreds of people running in one direction, and I heard police sirens coming from every single direction."

Videos posted on social media show the panic in the area. 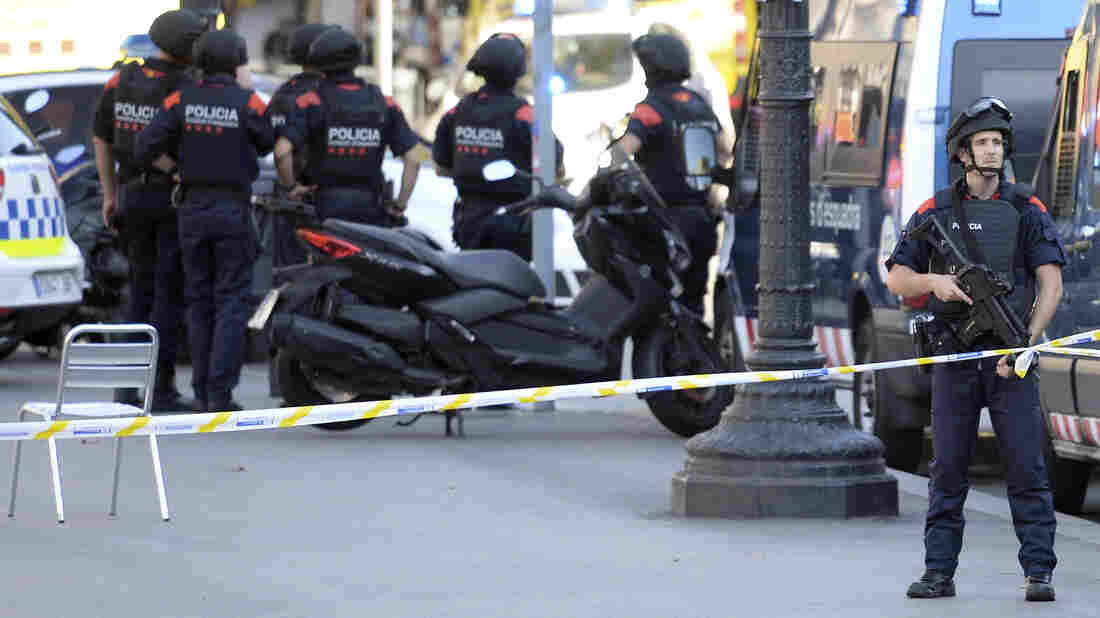 Authorities are asking people to stay away from Las Ramblas boulevard and a nearby public square in Barcelona. Josep Lago/AFP/Getty Images hide caption 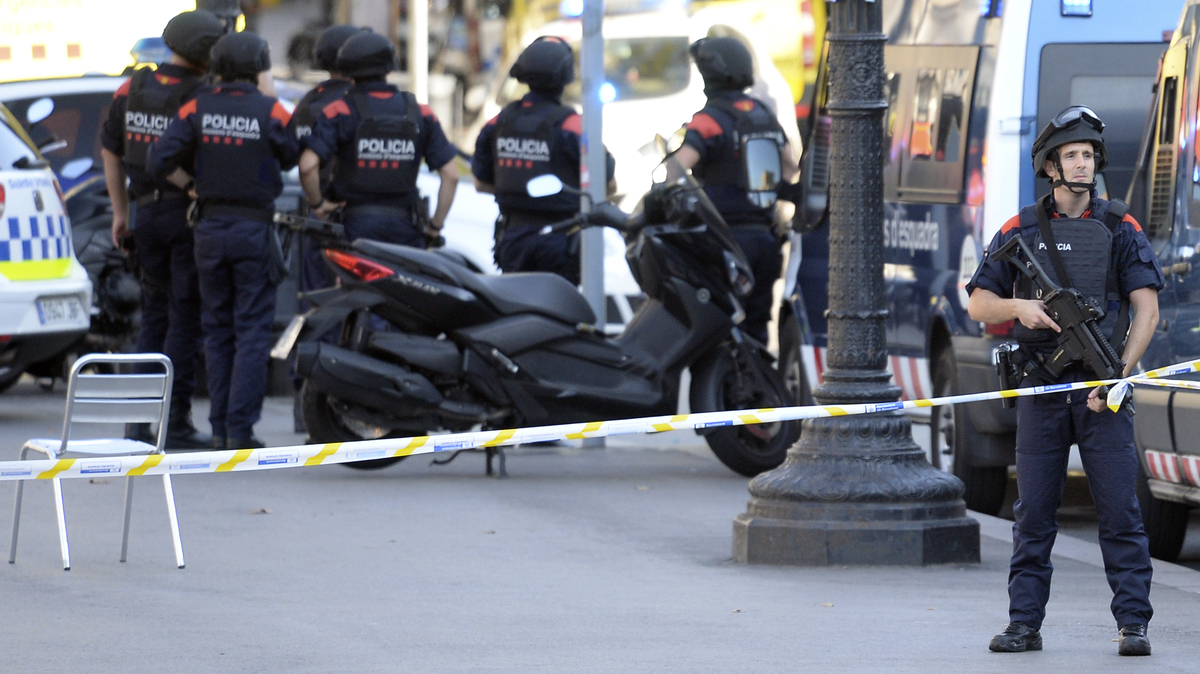 Authorities are asking people to stay away from Las Ramblas boulevard and a nearby public square in Barcelona.

On Twitter, the Catalan police force described the incident as a "massive trampling ... by a person with a van." Authorities urged everyone in Barcelona to avoid the area and remain calm. Nearby transportation stops, shops and restaurants closed down.

Spanish Prime Minister Mariano Rajoy said on Twitter that he is in contact with authorities and that the priority is "tending to the wounded in Las Ramblas and facilitating the work of security forces."

Investigations are still ongoing. Late Thursday evening, police tweeted that the van attack is related to an explosion that happened Wednesday night in Alcanar, Spain, a town more than 100 miles down the coast from Barcelona. That explosion, which killed one person, had been assumed to be caused by a gas leak.

Barcelona is the capital of Spain's autonomous Catalonia region, which has a distinct language and culture. Las Ramblas (also known as La Rambla), which includes a tree-lined pedestrian path, terminates in the Placa de Catalunya.

Authorities advised anyone in the region to stay where they are and communicate via social media instead of telephone to avoid overwhelming the phone system.

"We have fought many battles against terrorism throughout history. We have always beaten them. In this moment, the Spanish will win again," he said. "Today, the fight against terrorism is the principle priority of free and open societies like ours. It is a global threat and the answer must be global."

International leaders have condemned the attack, with British Prime Minister Theresa May saying, "The UK stands with Spain against terror," and President Trump tweeting that the U.S. "will do whatever is necessary to help. Be tough & strong, we love you!"

Vice President Pence also addressed the Barcelona attack during remarks he made in Panama. He called Thursday a "tragic day" and said the U.S. and its allies "will find and punish those responsible, and drive the evil of radical Islamic terror from the face of the earth."

Vehicular attacks have grown increasingly common as weapons of terror.

Massive car attacks struck Berlin and the French city of Nice in 2016. Hamid, the terrorism researcher based in Barcelona who witnessed people fleeing the attack, noted that "since 2014 ISIS has been calling for people to get behind a car and to carry out attacks."

The tactic has also been replicated by other groups, he said, like the man who attacked a mosque in Finsbury Park in London. This past weekend, a man considered a white supremacist drove his car into a crowd of anti-racist protesters, killing one, in an incident U.S. authorities described as domestic terrorism.

Last December, Aki Peritz reported for NPR that it's difficult to prevent such attacks: "The potential targets are too numerous to defend them all," he says, and "a vehicle attack takes only one determined attacker."