Accessibility links
Boston Right-Wing 'Free Speech' Rally Dwarfed By Counterprotesters : The Two-Way Thousands of counterprotesters gathered in Boston Common to meet the rally participants, who said they have no connection to those who perpetrated violence in Charlottesville, Va., last week. 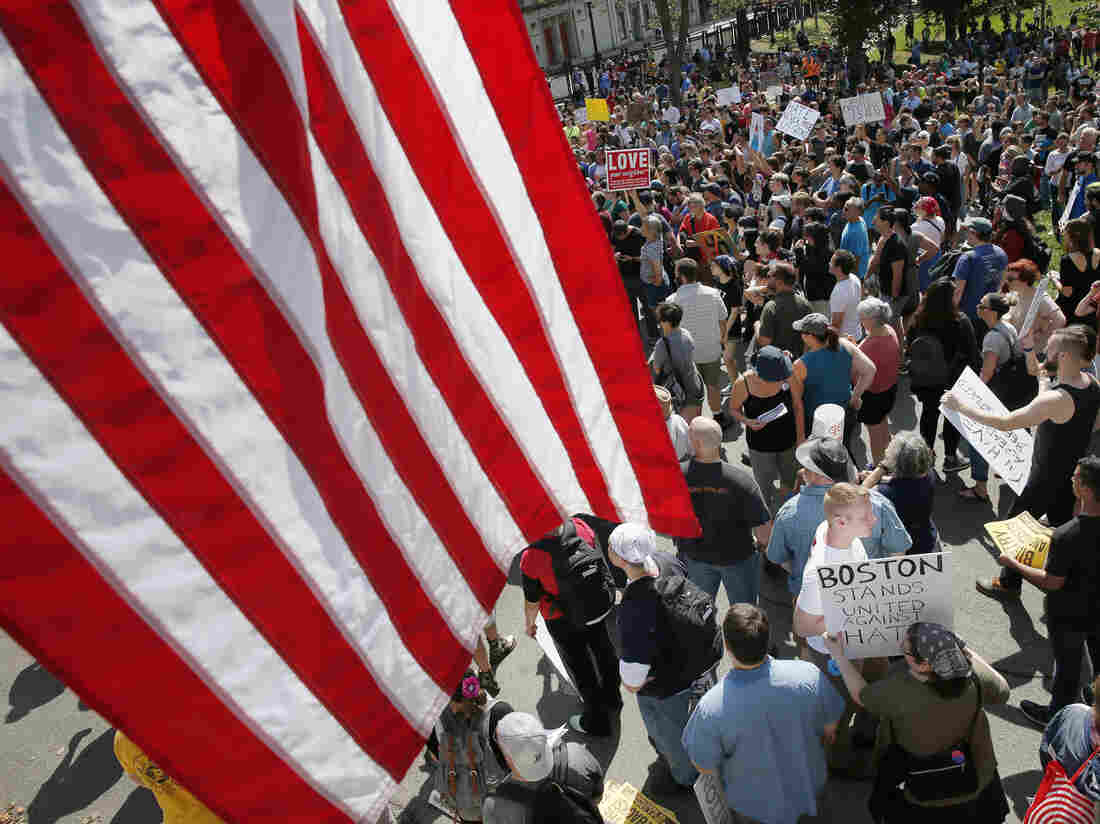 Counterprotesters assemble at the Statehouse before a planned "Free Speech" rally by conservative organizers begins on the adjacent Boston Common, on Saturday. Michael Dwyer/AP hide caption 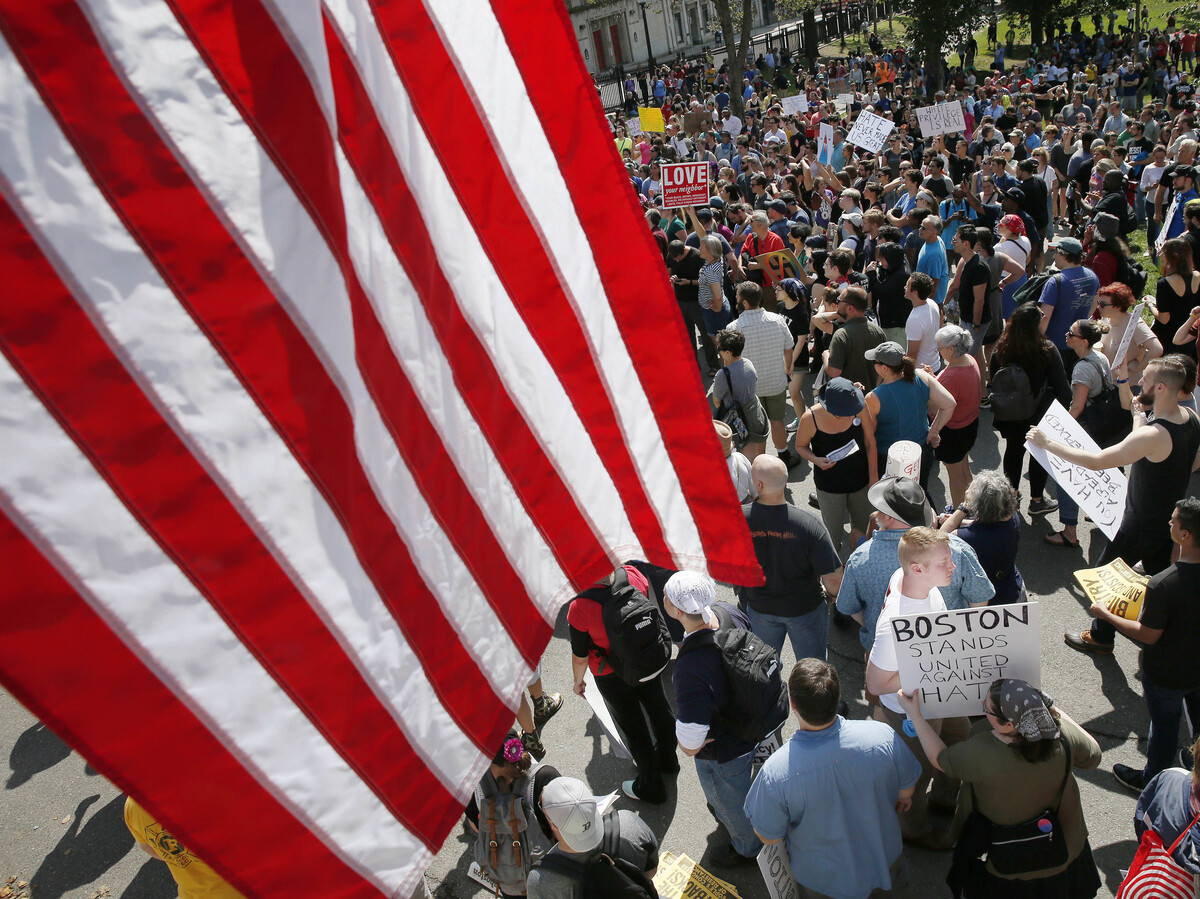 Counterprotesters assemble at the Statehouse before a planned "Free Speech" rally by conservative organizers begins on the adjacent Boston Common, on Saturday.

A small number of right-wing "Free Speech Rally" demonstrators disbanded early from Boston Common after they were confronted by thousands of counterprotesters shouting anti-Nazi and anti-KKK slogans.

JUST IN: The attendees of the self-described free speech rally have left the Parkman Bandstand, with a police escort. https://t.co/Nezl3iQPHv

Deborah Becker, a reporter with member station WBUR in Boston, said that "a few dozen" rally attendees were escorted from Parkman Bandstand by police and placed into police vehicles "for their own safety."

"The counterdemonstrators cheered as the group was escorted out of the area in police wagons," reports WGBH's Phillip Martin.

"I didn't realize how unplanned of an event it was going to be," Samson Racioppi, a Libertarian candidate for Congress who was expected to speak at the rally, was quoted by WCVB-TV as saying. "I really think it was supposed to be a good event by the organizers, but it kinda fell apart."

The conservative activists had insisted they have no connection to last week's violent protests in Charlottesville, Va., which drew white nationalists and sparked violent clashes and a deadly vehicle attack. But that did not satisfy those who opposed their message. Many of them handed out stickers showing the face of 32-year-old Heather Heyer, who was killed in Charlottesville when a man who attended the white nationalist rally allegedly rammed his car into a crowd of counterdemonstrators.

Earlier, a speaker who addressed the crowd condemned what many see as President Trump's tepid response to events last week in Charlottesville.

"If you don't condemn it, you condone it," the speaker said. Demonstrators also chanted "black lives matter" and "our streets."

On Saturday afternoon, Trump tweeted his response to the rally, commending law enforcement officers on a job well done and protesters on speaking out against bigotry.

Some at the rally carried signs — among them: "Alt-Right Delete" and "The only thing we hate in Boston is the Yankees."

Martin says: "Boston police waded into the crowd at times before the march began to confiscate sticks and poles that were used to hold placards, one which read: 'death to Nazis, impeach Trump, this land is our land too.' "

Chris Hood, an 18-year-old Boston resident who planned to join the Free Speech rally, was quoted by The Associated Press as saying: "The point of this is to have political speech from across the spectrum, conservative, libertarian, centrist."

"This is not about Nazis. If there were Nazis here, I'd be protesting against them," Hood said.

Some 500 officers, both uniformed and undercover, were to be deployed to maintain order, according to Boston Police Commissioner William Evans. Massachusetts Gov. Charlie Baker, a Republican, and Boston Mayor Marty Walsh, a Democrat, both had warned that extremist unrest in the city would not be tolerated.

Speaking with member station WBUR in Boston, an organizer of the self-described free speech rally insisted that the message from the demonstrators "is one that [is] anti-hate and pro-peace."

"I think we've taken pretty much every precaution, not only with [Boston police], but with the other organizers, to make sure our message is clear," John Medler, of the Boston Free Speech Coalition, said ahead of Saturday's rally.

WBUR reported Friday that a "free speech" rally in Boston in May drew not only more mainstream conservative activists, but also some of the same groups that caused violence in Charlottesville:

"On May 13, a group of veterans, ex-police, Tea Party Republicans and young people affiliated with the self-described 'alt-right' — a conservative faction that mixes racism, white nationalism, anti-Semitism and populism — gathered around the Common's historic Parkman Bandstand.

"Organizers claimed that they were honoring their First Amendment right to assemble and express radical viewpoints. But the event felt more like a small, right-wing rally than a celebration of the Constitution."

For Saturday's rally, police banned signs on sticks and backpacks, although many were seen among the counterprotesters. The Boston Globe writes:

"Boston officials said Friday that they will shut down the Saturday event if there are signs of violence.

" 'The courts have made it abundantly clear that they have the right to gather, no matter how repugnant their views are,' said Mayor Martin J. Walsh. 'They don't have the right to create unsafe conditions. ... They must respect our city.' "

"He urged the public not to confront members of hate groups who show up Saturday and advised residents and tourists to avoid the Common during the rally."

An earlier version of this story incorrectly said Phillip Martin works for WBUR. He actually works for WGBH.