Accessibility links
Search For 10 Missing Launched Off Singapore After U.S. Destroyer, Tanker Collide : The Two-Way The Navy says the guided missile destroyer sustained "significant damage" in the collision east of the Strait of Malacca, one of the busiest shipping lanes in the world. 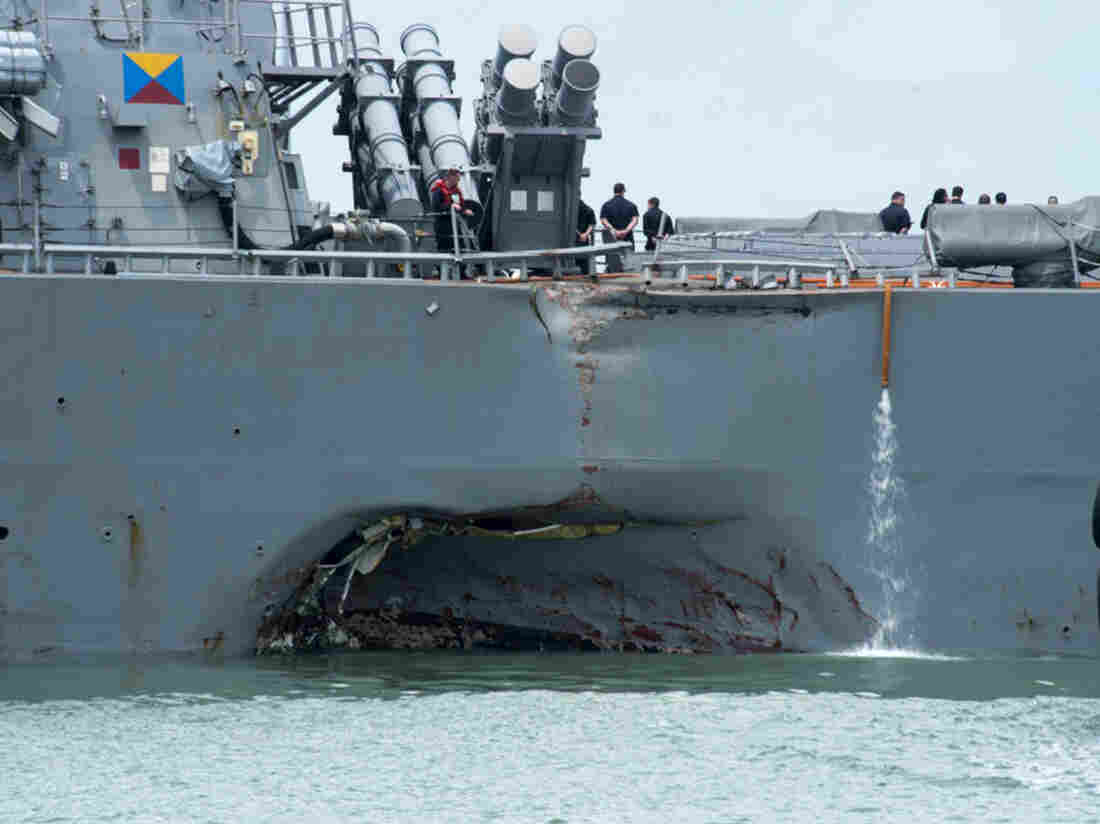 Damage to the port side is visible as the guided-missile destroyer USS John S. McCain steers toward Changi naval base in Singapore following a collision with the Alnic MC tanker on Monday. Mass Communication Specialist 2nd Class Joshua Fulton/AP hide caption 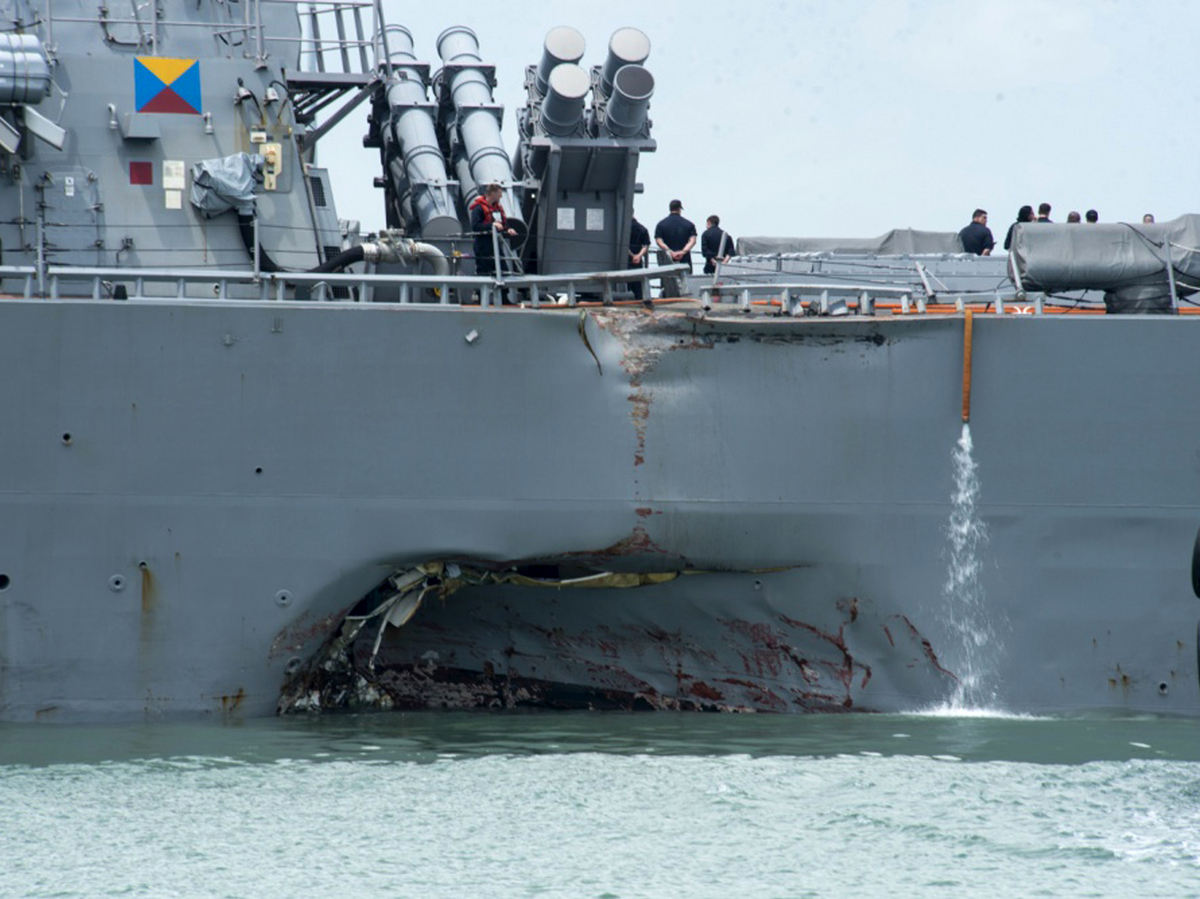 Damage to the port side is visible as the guided-missile destroyer USS John S. McCain steers toward Changi naval base in Singapore following a collision with the Alnic MC tanker on Monday.

An international air-sea rescue has been launched in waters off Singapore for 10 missing U.S. sailors after a collision between the guided-missile destroyer USS John S. McCain and an oil tanker.

As The Two-Way has reported, the collision with the Liberian-flagged oil and chemical tanker Alnic MC occurred at 6:24 a.m. Japan time as the destroyer — named after Arizona Sen. John McCain's father and grandfather, who were both admirals — was on a routine visit to the port of Singapore.

"Significant damage to the hull resulted in flooding to nearby compartments, including crew berthing, machinery, and communications rooms. Damage control efforts by the crew halted further flooding," the Navy said in a statement. 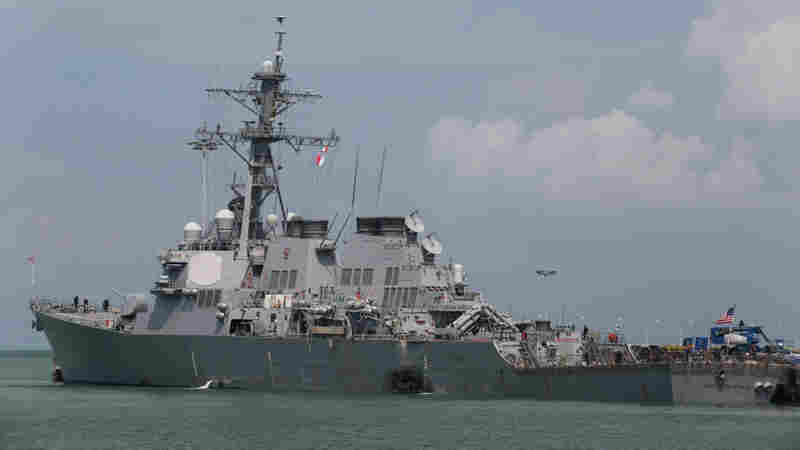 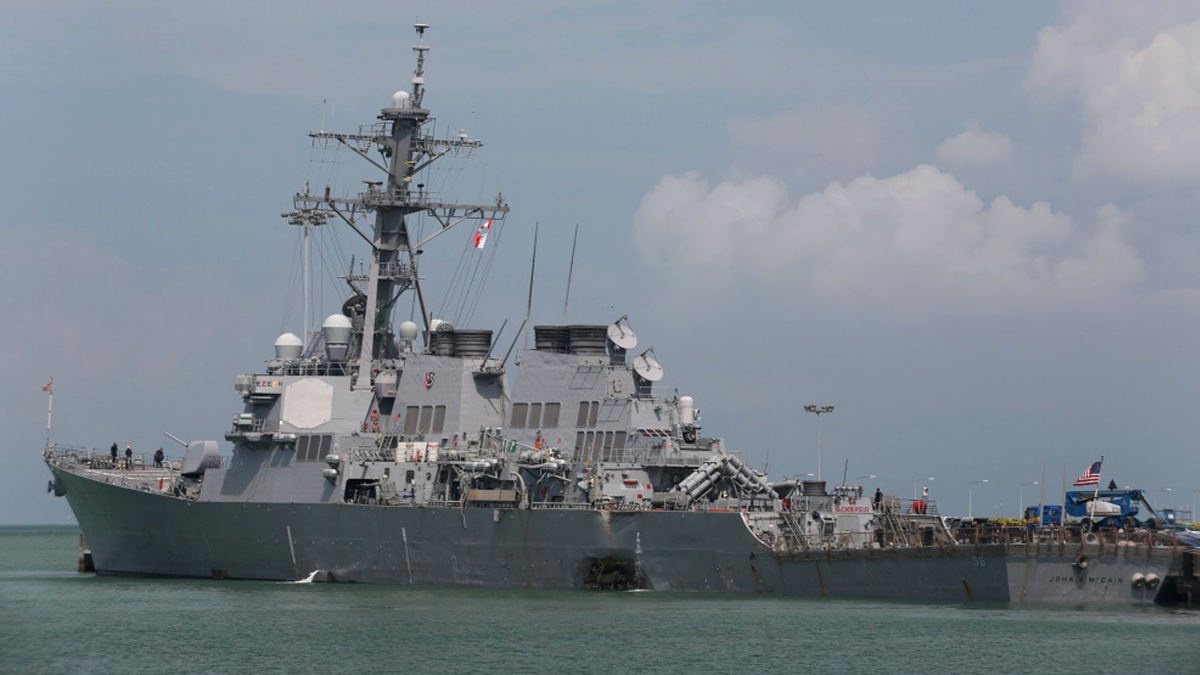 The guided-missile destroyer USS John S. McCain is moored pier side at Changi naval base in Singapore.

The incident comes only weeks after the USS Fitzgerald, a sister ship of the McCain and also part of the Navy's 7th Fleet, collided with a Philippine-flagged container ship off the coast of Japan. Seven crew members were killed in that collision. The U.S. Navy announced last week that it was relieving the Fitzgerald's commander and two other senior officers, citing inadequate leadership and flawed teamwork.

The office of the Chief of Naval Operations said in a statement that it would release a short video on Monday updating the situation with the USS McCain and calling for "an operational pause and a deeper look into how we train and certify forces operating in and around Japan."

The review would be conducted on "a tight timeline" owing to the need "to get to the bottom of these problems and quickly make corrective actions," the statement read.

Speaking in Amman, Jordan, Defense Secretary James Mattis said Monday that he supports such an investigation.

Photographs of the 505-foot McCain, which arrived at Changi naval base in Singapore under its own power after the collision, show damage to the vessel's port side near the waterline, aft of the bridge.

The Navy says the collision occurred east of the Strait of Malacca, which is one of the world's busiest shipping lanes.

Singapore's government said no crew members aboard the 600-foot Alnic MC were injured but that the tanker had a damaged forward compartment about 23 feet above the waterline. There were no reports of chemical or oil spills.

Vessels and aircraft from the U.S., Indonesia, Singapore and Malaysia were searching for the missing sailors. Five other sailors were hurt in the collision, but the U.S. Navy says their injuries are not considered life-threatening.

The Navy says at least two vessels from the Singapore navy and another from the Southeast Asian country's coast guard had joined the search for the missing destroyer crew. U.S. MH-60S helicopters and MV-22 Ospreys were also involved in the search.

Malaysia says one of its ships was the first to respond to a distress call from the stricken U.S. destroyer.

Thoughts & prayers are w/ our @USNavy sailors aboard the #USSJohnSMcCain where search & rescue efforts are underway. https://t.co/DQU0zTRXNU

David Larter, a U.S. Navy veteran and staff writer for Defense News, tells NPR's Morning Edition that although it appears that the destroyer was the vessel hit, "in situations like this it's the responsibility of the smaller, more maneuverable ship to get out of the way."

"There are so many safeguards in place to avoid these collisions that it's kind of baffling," Larter tells NPR.

According to The Associated Press, the Alnic MC was inspected on July 29 at the Chinese port of Dongying and found to have "one document deficiency, one fire safety deficiency and two safety of navigation problems."

President Trump, asked by journalists late Sunday for his thoughts on the incident, replied: "That's too bad." Later he tweeted "Thoughts & prayers" to the crew.