Accessibility links
Remains Of Some Missing Sailors Found In 'Sealed Compartments' On USS John S. McCain : The Two-Way Adm. Scott H. Swift, the commander of the U.S. Pacific Fleet, says remains have been found in damaged areas of the destroyer that collided with a merchant tanker in waters off Singapore. 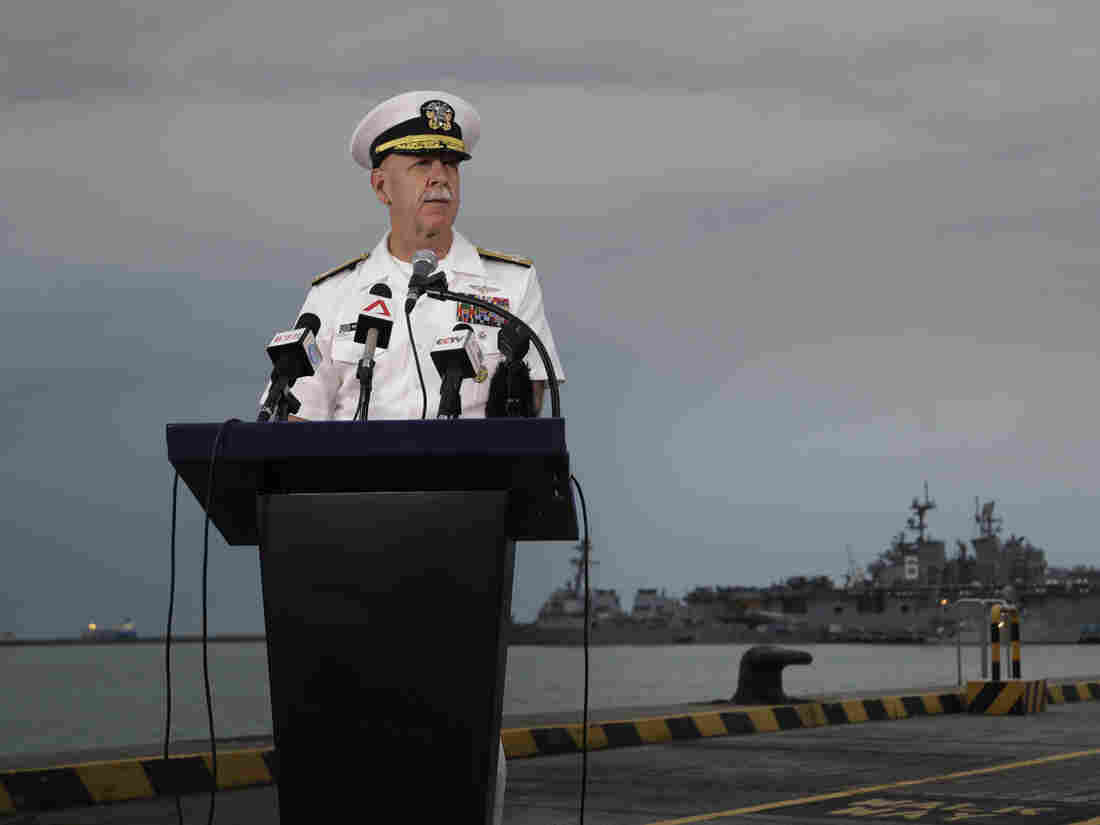 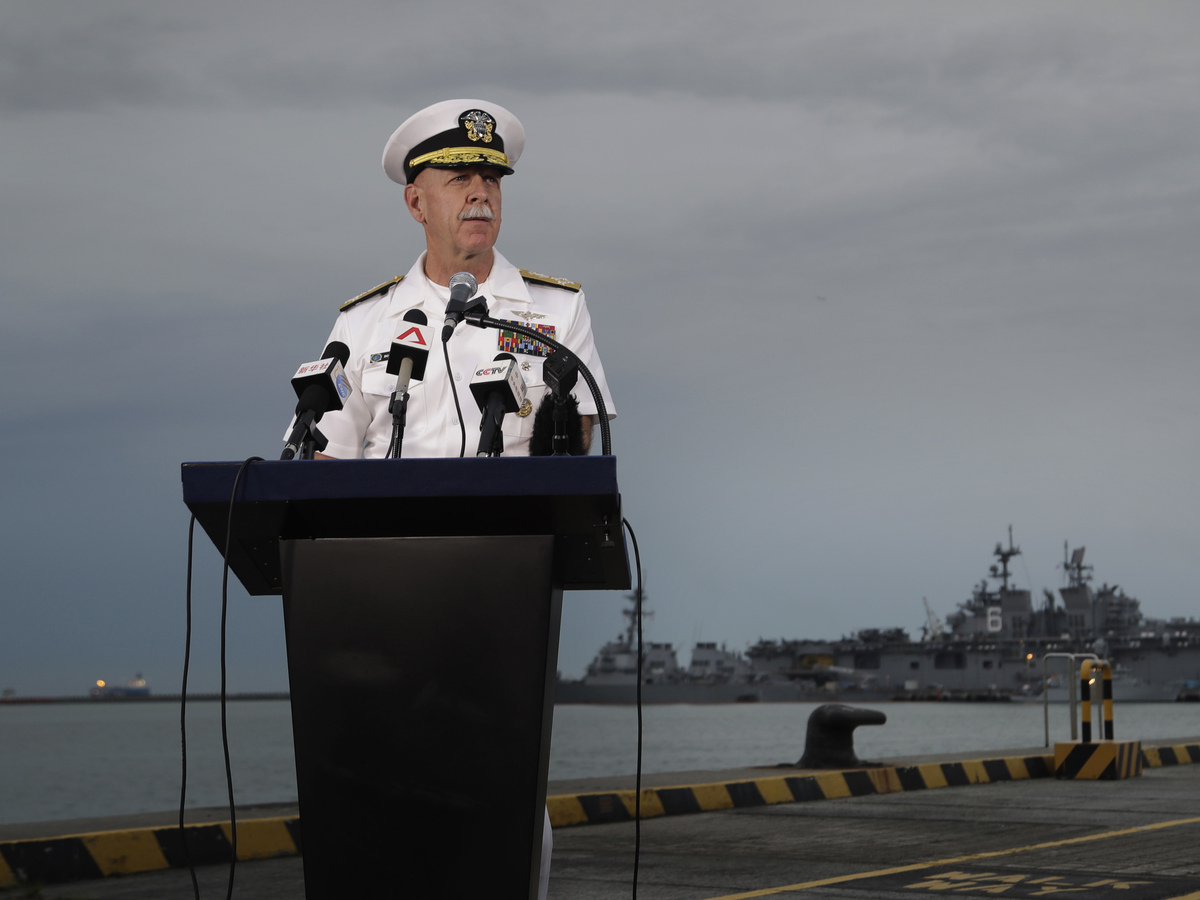 The commander of the U.S. Pacific Fleet says Navy divers have found remains of some of the 10 sailors aboard the USS John S. McCain who were missing after the guided-missile destroyer collided with a merchant vessel in waters off Singapore earlier this week. 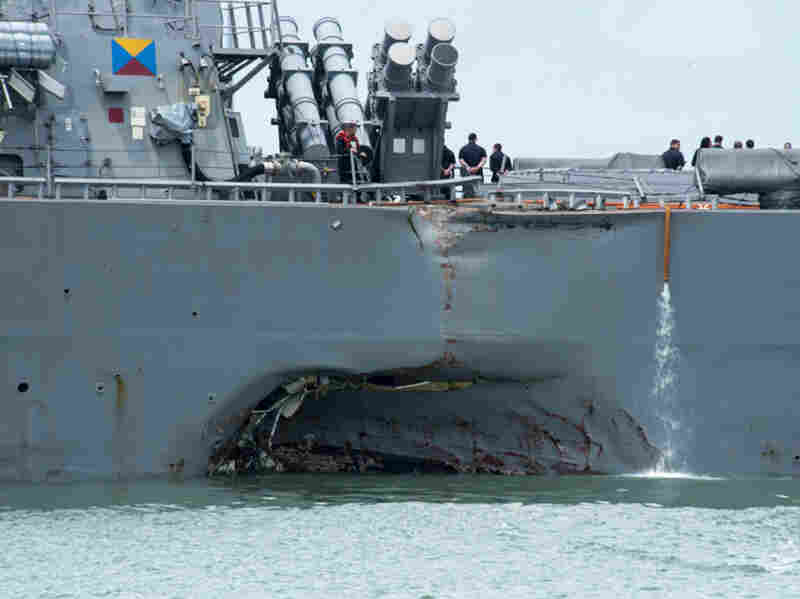 Damage to the port side is visible as the guided-missile destroyer USS John S. McCain steers toward Changi naval base in Singapore following a collision with the merchant vessel Alnic MC on Monday. Mass Communication Specialist 2nd Class Joshua Fulton/AP hide caption 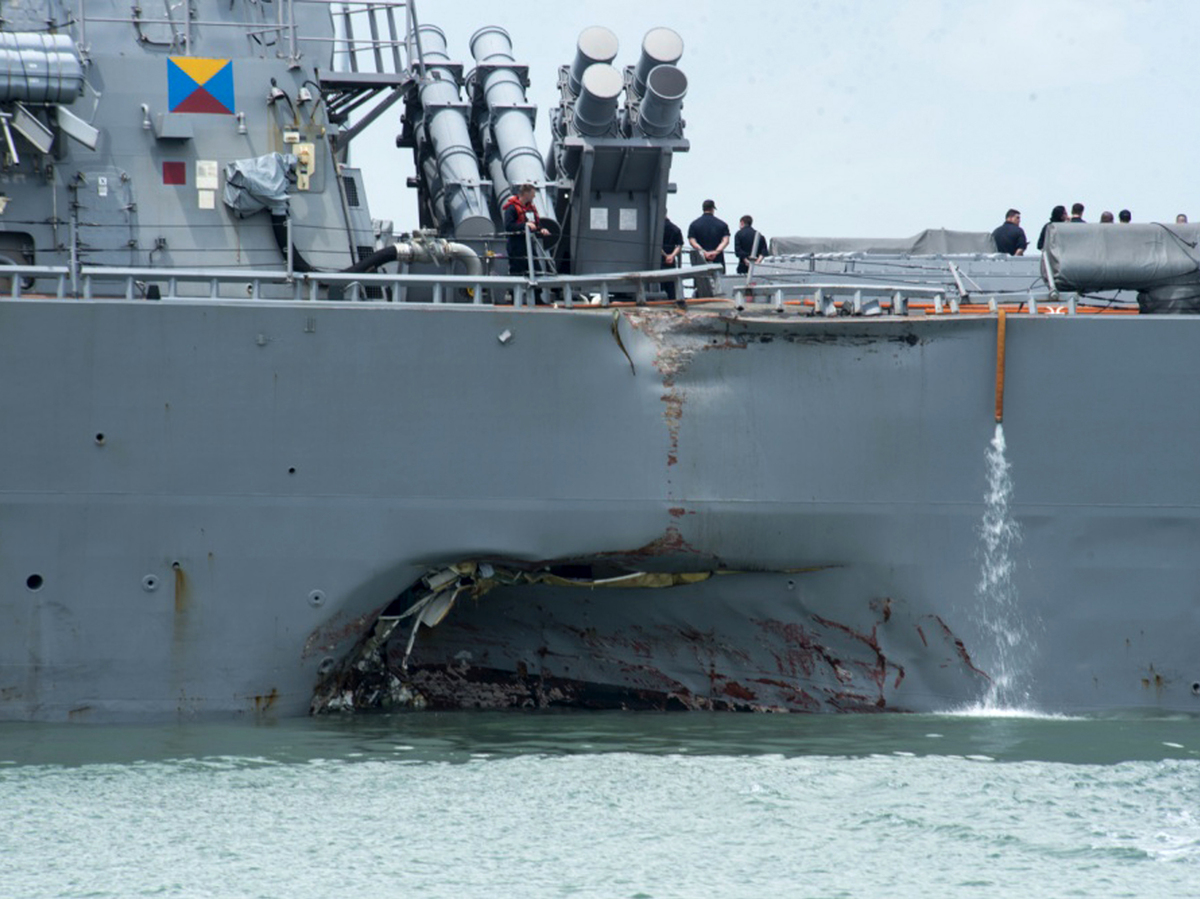 Damage to the port side is visible as the guided-missile destroyer USS John S. McCain steers toward Changi naval base in Singapore following a collision with the merchant vessel Alnic MC on Monday.

Adm. Scott Swift said the remains were found in compartments on the ship that were "significantly damaged" in Monday's collision, which left a gaping hole in the ship's port side.

"The divers were able to locate some remains in those sealed compartments during their search today," Swift told reporters Tuesday at Singapore's Changi naval base, where the damaged vessel is docked. He declined to specify how many remains were recovered.

Swift said the Malaysian navy, which is conducting a search in the area where the collision took place, has also reported finding remains, but it was not yet clear if they were from the McCain.

"We have a report from the Malaysians ... that they have found a body, we are in the process of effecting the transfer of the body," Swift told reporters.

"We are always hopeful that there are survivors. Until we have exhausted any potential of recovering survivors or bodies, the search will continue," he said.

In a statement posted earlier on its website, the Pacific Command said divers equipped with "surface supplied air rigs ... will access sealed compartments located in damaged parts of the ship. Additionally, they will conduct damage assessments of the hull and flooded areas."

"While diving proceeds, ships and aircraft from the Royal Malaysian Navy and Republic of Singapore Navy continue to provide search and rescue assistance along with two U.S. Navy MH-60 Seahawk helicopters from amphibious assault ship USS America (LHA 6). Those search efforts are focused on an area east of the Strait of Malacca and Singapore where the collision occurred as McCain was transiting to Singapore for a routine port visit."

Monday's collision between the McCain and the Liberian-flagged and Greek-owned oil-and-chemical tanker Alnic MC occurred early Monday local time near the eastern entrance of the Strait of Malacca, where ships are funneled into a narrow waterway between Malaysia and Singapore. It is one of the busiest shipping lanes in the world.

The incident comes just weeks after a sister ship to the McCain, the USS Fitzgerald, collided with a container ship in waters off Japan, killing seven sailors. The U.S. Navy announced last week that it was relieving the Fitzgerald's commander and two other senior officers, citing inadequate leadership and flawed teamwork.

In the news conference, Swift said those two collisions and two other incidents involving the U.S. Pacific Fleet — a collision between the USS Lake Champlain and a South Korean fishing boat in May, and the grounding in January of the USS Antietam in Japan's Tokyo Bay — "cannot be viewed in isolation."

U.S. Defense Secretary James Mattis confirmed Monday that the Navy will carry out a broad investigation into operations of the U.S. Pacific Fleet.

Swift said the U.S. Pacific Command would conduct a pause in its operations until Aug. 28 and then conduct "a second phase" of the probe. The Navy, he said, needs to determine "if there is a common cause at the root of these events, and if so, how do we solve that."

The investigation will involve "a deliberate reset of our ships" that would look at such issues as navigation and training, Swift said. "We will take what we learn in each phase and apply it as we move forward."