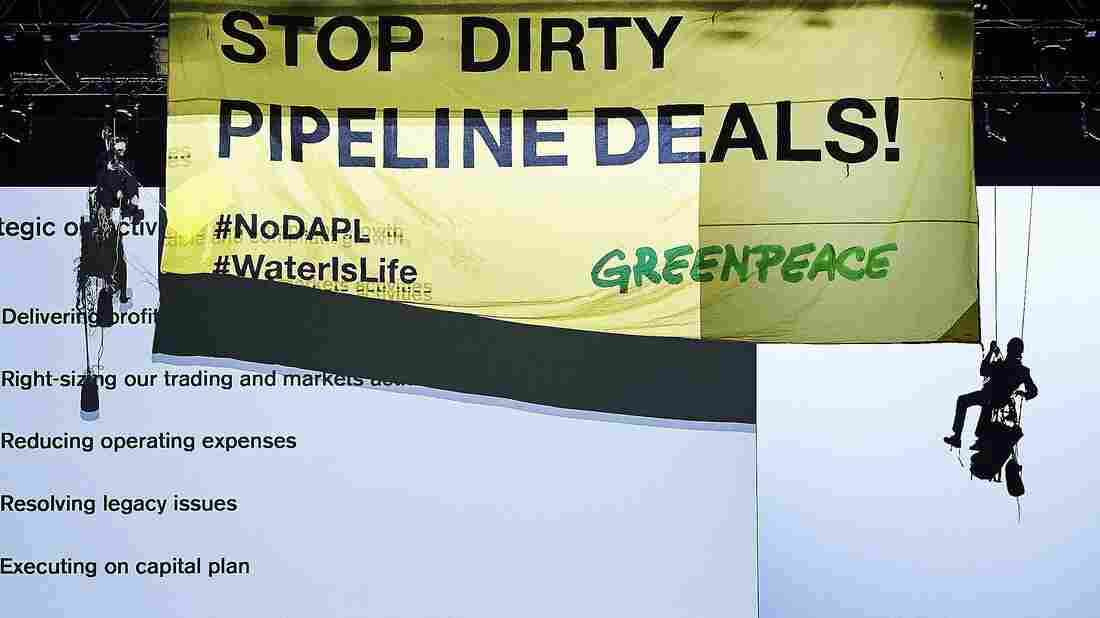 Greenpeace activists hang a banner from the rafters at a bank shareholders' meeting earlier this year in Zurich, calling for it to "STOP DIRTY PIPELINE DEALS!" Also on the banner are hashtags supporting Dakota Access Pipeline protesters. Michael Buholzer/AFP/Getty Images hide caption 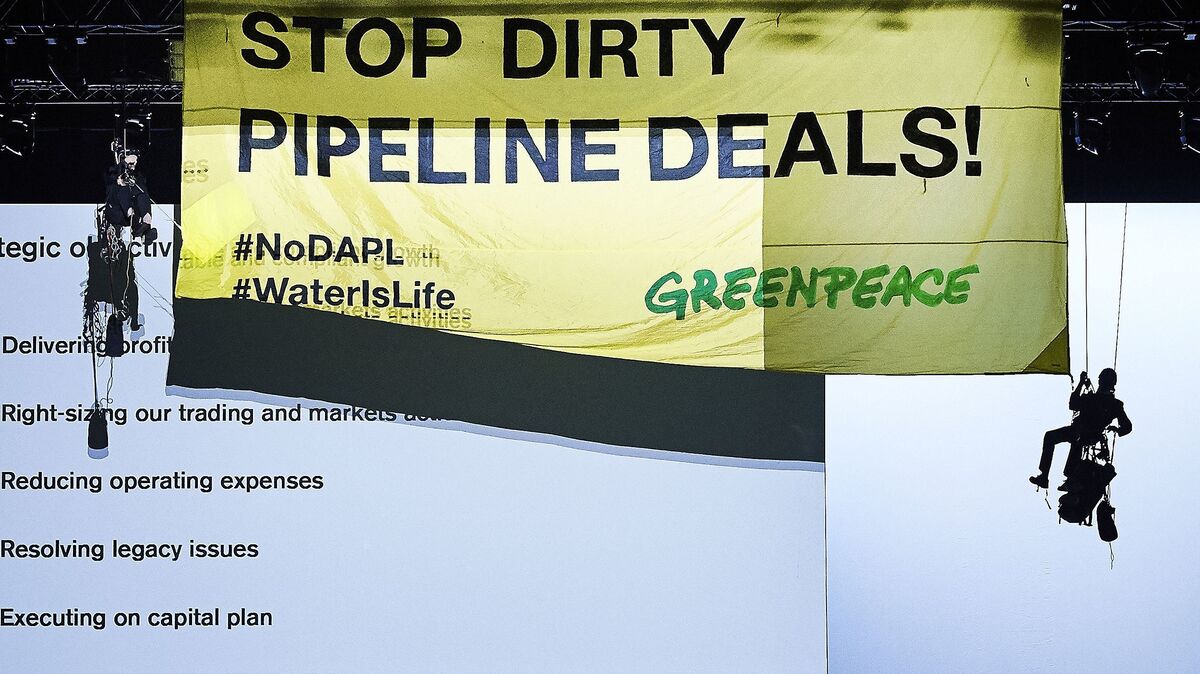 Greenpeace activists hang a banner from the rafters at a bank shareholders' meeting earlier this year in Zurich, calling for it to "STOP DIRTY PIPELINE DEALS!" Also on the banner are hashtags supporting Dakota Access Pipeline protesters.

The developer behind the Dakota Access Pipeline, which for months drew thousands of protesters, has sued Greenpeace and several other environmental groups for their role in delaying the pipeline's construction. In the racketeering lawsuit it filed in federal court Tuesday, Energy Transfer Partners alleges these groups inflicted "billions of dollars in damage" with their "criminal activity and campaigns of misinformation" against the pipeline.

Greenpeace led a "network of putative not-for-profits and rogue eco-terrorist groups" — including Earth First! and BankTrack, who are also defendants — which disseminated false claims about the pipeline's impact on the environment and the Standing Rock Sioux tribe's sacred sites, alleges the lawsuit.

Energy Transfer says the environmental groups, which together it refers to as "the Enterprise," engaged in racketeering and defamation that ended up increasing the cost of construction by at least $300 million. But the developer — represented by a law firm whose managing partner is Marc Kasowitz, President Trump's personal attorney — notes the "full extent of damage" must be determined at trial with a jury.

"This is the second consecutive year Donald Trump's go-to attorneys at the Kasowitz law firm have filed a meritless lawsuit against Greenpeace," Greenpeace USA General Counsel Tom Wetterer responded in a statement, referring to a similar 2016 lawsuit filed against Greenpeace by Resolute Forest Products.

"It is yet another classic 'Strategic Lawsuit Against Public Participation' (SLAPP), not designed to seek justice, but to silence free speech through expensive, time-consuming litigation," Wetterer added. "This has now become a pattern of harassment by corporate bullies, with Trump's attorneys leading the way."

In Their Own Words: The 'Water Protectors' Of Standing Rock

Crude oil began flowing through the $3.8 billion pipeline earlier this summer, roughly half a year after the project was originally intended to be finished. While the pipeline stretches more than 1,000 miles, most of the controversy over its construction focused on its path across the Missouri River in North Dakota, near the Standing Rock Sioux tribe's reservation.

As NPR's Camila Domonoske noted, the tribe "argued the route would threaten the tribe's water sources and sacred sites," even winning a halt to construction — but only briefly. The decision to deny a permit for the proposed route, which was handed down in the closing months of the Obama administration, was quickly reversed after President Trump entered office.

Energy Partners argues that throughout this fight, the environmental groups it's suing sought to undermine a legal project with their "calculated and thoroughly irresponsible attacks."

"They caused enormous harm to our company and to people and property along the pipeline's route, wreaking havoc in those states," Energy Transfer spokesperson Vicki Granado said Tuesday. "We have an obligation to our shareholders, partners, stakeholders and all those negatively impacted by the violence and destruction intentionally incited by the defendants to draw a line."