Accessibility links
New Yorkers Mourn End Of An Era As 'Village Voice' Ceases Print Edition : The Two-Way On Tuesday, the famed alt weekly announced it would be ending its free weekly print edition. The publication was purchased by Peter Barbey in 2015. 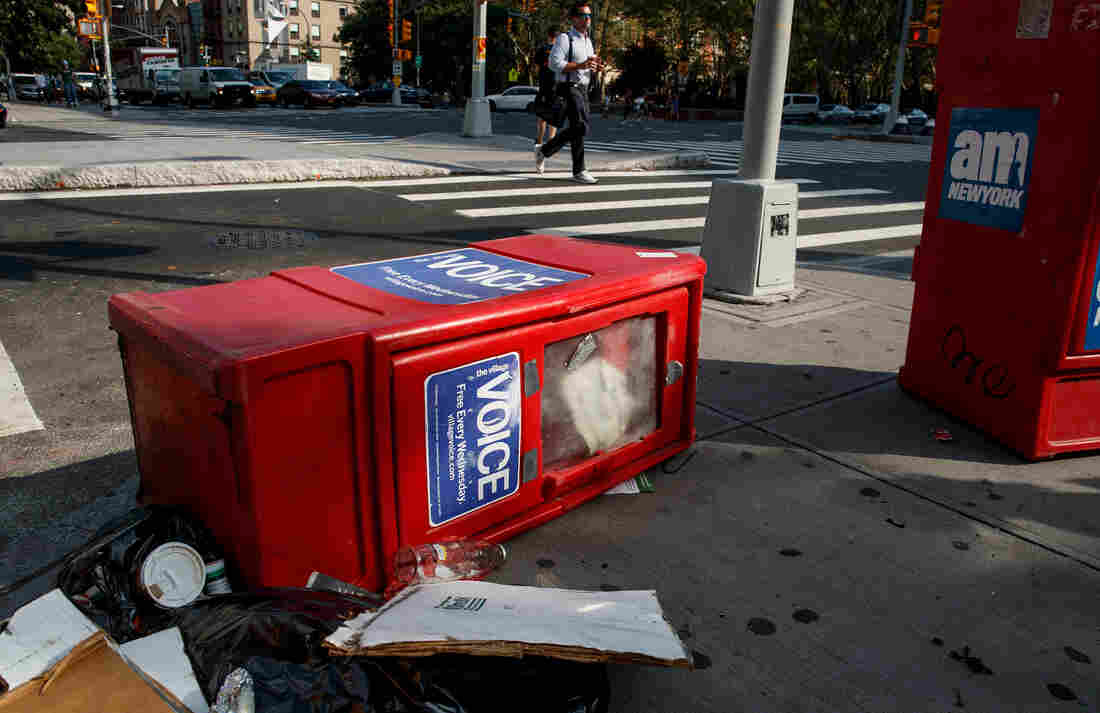 A Village Voice newspaper stand lays on the ground next to garbage in New York City's East Village on Tuesday. The Village Voice, one of the oldest and best-known alternative weeklies in the U.S., announced that it will no longer publish a print edition. Drew Angerer/Getty Images hide caption 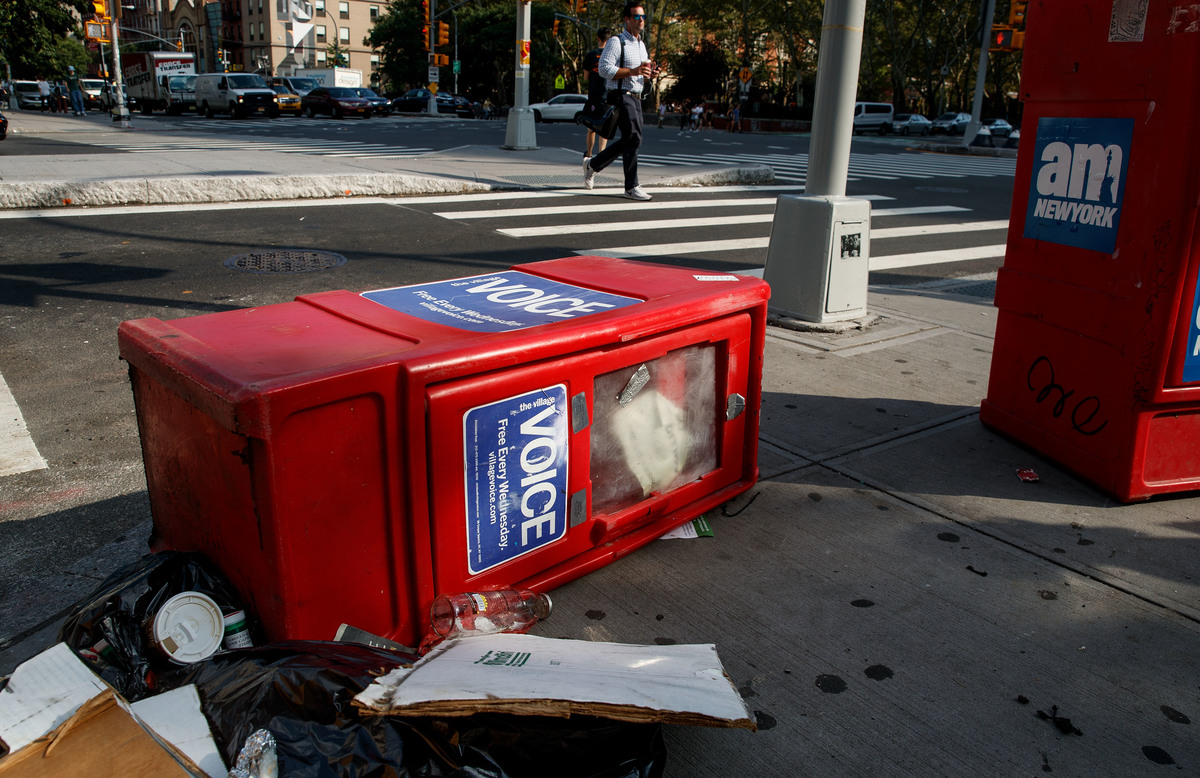 A Village Voice newspaper stand lays on the ground next to garbage in New York City's East Village on Tuesday. The Village Voice, one of the oldest and best-known alternative weeklies in the U.S., announced that it will no longer publish a print edition.

You can swipe. You can scroll. But New Yorkers will no longer be able to flip through The Village Voice. This week, the legendary alternative weekly announced that it's ending its free paper version.

In a press release distributed Tuesday, the publication said it plans to maintain its digital platform and continue to host events but will no longer be printing paper copies. The Voice had been in print for more than six decades and recently had a distribution of some 120,000 copies each week.

It's the latest twist of the knife for a publication that has already seen round after round of layoffs, including of some of its best-known and most-beloved reporters and critics.

The Village Voice was exposing Donald Trump when no one else was paying attention. pic.twitter.com/UvmzMpGheS

And the news has been met with mourning and nostalgia in some corners of the New York media world (and beyond). Again.

"It's an NYC media tradition nearly as rich as the personal essay on leaving New York: Announce the Voice has betrayed you; memorialize her finer days; and declare her, as did the deserter before you, dead in grit and relevance," Simone Wilson wrote on Patch.com.

Everyone agrees that in its heyday, the Voice was vibrant, energetic, essential, contrarian, contradictory, cantankerous and quintessentially New York. But nobody can agree on when, exactly, those glory days ended.

"For Voice devotees, the golden age was always the one just past," The New York Times writes.

The Internet revolutionized classified advertising, sending shock waves through newspapers all across the country, including free alt weeklies.

"The business has moved online — and so has the Voice's audience, which expects us to do what we do not just once a week, but every day, across a range of media, from words and pictures to podcasts, video and even other forms of print publishing," Voice owner Peter Barbey said in Tuesday's statement.

Barbey purchased the alt weekly in 2015, amid scandal, as NPR's David Folkenflik reported at the time.

"Weekly papers are financially troubled these days, undermined by drops in readership, advertising and relevance," David said. "For Village Voice and its sister papers one financial bright spot has been Backpage.com, an online classified ads site — but it has been denounced by religious activists, a U.S. senator and New York Times columnist Nick Kristof for enabling child prostitution. Backpage says it has spent much time and millions of dollars to ensure that its classifieds involve only legal activities and consenting adults, but the headaches endured."

The legal struggles over Backpage continue; prosecutors accuse the site of actively participating in prostitution, while Backpage says the ongoing pressure on its business amounts to "unconstitutional government censorship." But now the ownership of the Village Voice and Backpage have been separated, and the alt weekly no longer "solicits or accepts" sex ads, according to the paper's statement.

After investing in the print publication, upping the number of copies and improving the paper quality, Barbey is now shutting it off altogether.

You can see an archive of old Voice editions over at Google.

And you can also buy hundreds of old copies on eBay ... or, of course, on Craigslist.