Accessibility links
Government Can Search Inauguration Protest Website Records, With Safeguards : The Two-Way The Department of Justice wants access to website records related to the protests during President Trump's inauguration. A judge approved the warrant but asked for procedures to protect privacy. 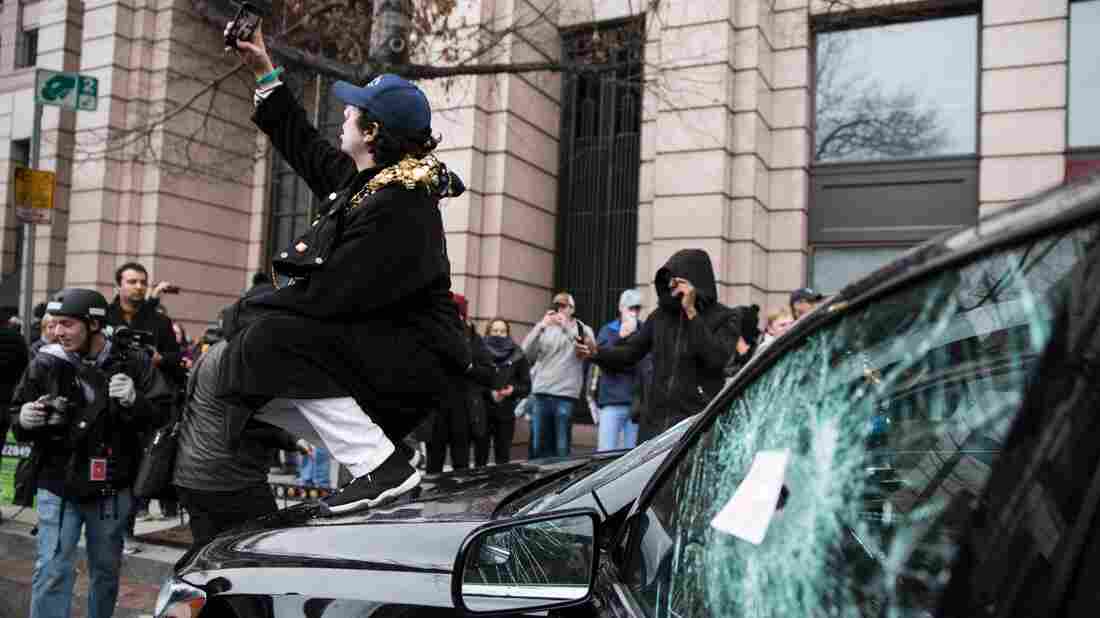 A man takes a selfie on the hood of a destroyed limousine during an Inauguration Day protest against President Trump on Jan. 20 in Washington, D.C. The Department of Justice has been cleared to search through website records related to organizing protests that day. Zach Gibson/AFP/Getty Images hide caption 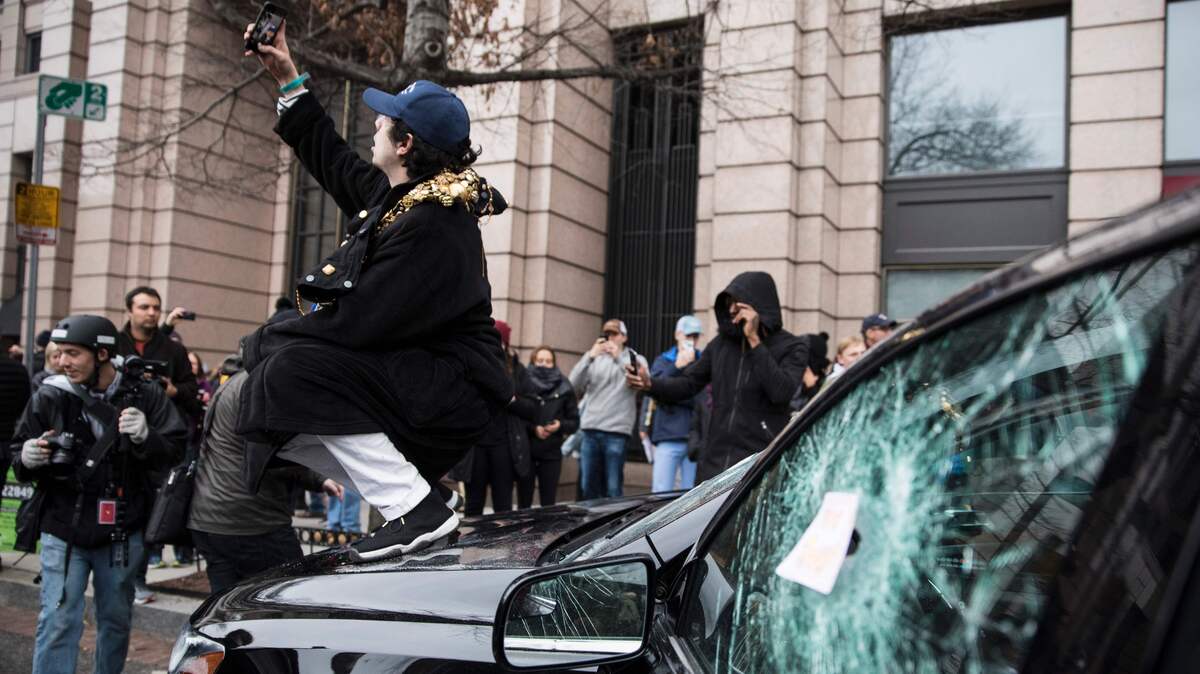 A man takes a selfie on the hood of a destroyed limousine during an Inauguration Day protest against President Trump on Jan. 20 in Washington, D.C. The Department of Justice has been cleared to search through website records related to organizing protests that day.

A judge in Washington, D.C., has approved a government request to access data from a website used to organize protests against President Trump's inauguration — with the caveat that the Department of Justice must establish "additional protections" to safeguard users' privacy and right to free speech.

The DOJ already had a warrant approved by a judge to search records related to the site DisruptJ20.org, which organized protests on Jan. 20. More than 200 protesters were charged with rioting, and the Justice Department is looking for evidence in some of those cases. But the Web hosting company DreamHost, which holds the records, challenged the government's request, calling it overly broad and saying it threatens privacy and free speech.

D.C. Superior Court Chief Judge Robert Morin told lawyers for the Justice Department that they could proceed with a narrower version of their warrant. But the government needs to develop a plan to "minimize" the exposure of "innocent users," as he put it.

The U.S. government had already scaled back the scope of its request before Thursday's hearing.

The original request would have compelled DreamHost to disclose 1.3 million IP addresses, which could reveal information about visitors to the protest-organizing site, the Web hosting company says.

DreamHost took the Department of Justice to court to challenge the scope of that request. Earlier this week, the government agreed to drop the request for visitor data en masse and also exclude data from after Jan. 20 and unpublished drafts of the website.

DreamHost welcomed that as a victory but still expressed concerns over the revised warrant.

In the hearing on Thursday, lawyers for the Web hosting company highlighted the fact that the warrant still asks for content from all email accounts on the DisruptJ20.org domain. Raymond Aghaian, representing DreamHost, compared that request with searching every apartment in a building with a single search warrant.

DreamHost also objected to the "two-step" process for executing the warrant. That is one way that law enforcement searches for evidence in digital files.

Step one is to acquire a large pool of data, which will include items that have no connection to a criminal case; step two is to filter out the innocuous content and only "seize" the relevant evidence. In the DreamHost matter, for instance, emails about hosting visitors to D.C. might be set aside, but an email arranging to bring crowbars to a protest might be kept. Everything not seized as evidence is then sealed.

"The fact that an FBI agent will be sitting there and actually reviewing the emails and knowing who this person is ... is an issue in and of itself," Aghaian told NPR. Even if a person's data is ultimately never seized, the fact that it was provided to the government in the first place could still have a "chilling effect," he said. For instance, someone who wants to email an advocacy group might decide not to, knowing their email might later be accessible by the government under a search warrant.

The judge said he had to balance two legitimate interests — free speech and law enforcement needs — and ultimately ruled for a two-step warrant process with additional safeguards.

He said the Department of Justice will need to specify in advance which people would have access to the data, describe how they would be filtering or searching through it and present the courts with a detailed list of what they had seized and why.

The Department of Justice would also be barred from sharing the data with anyone else, including other government agencies, and would need to design and present a system to "minimize" the impact on users not charged with crimes. It's not clear what such a system would look like.

In the meantime, DreamHost is supposed to pull all the data together and deliver it to the government; the Department of Justice will agree to not search through the data until they have the go-ahead from the courts.

Lawyers for DreamHost say they are evaluating their options, including the possibility of appeal. The Department of Justice declined to comment on a pending case.