Accessibility links
'Guru Of Bling' Rape Conviction Sparks Deadly Protests In India : The Two-Way Tens of thousands of followers of Gurmeet Ram Rahim Singh — who calls himself the "Guru of Bling" — gathered to show support for their leader. At least 28 people have died in unrest after the verdict. 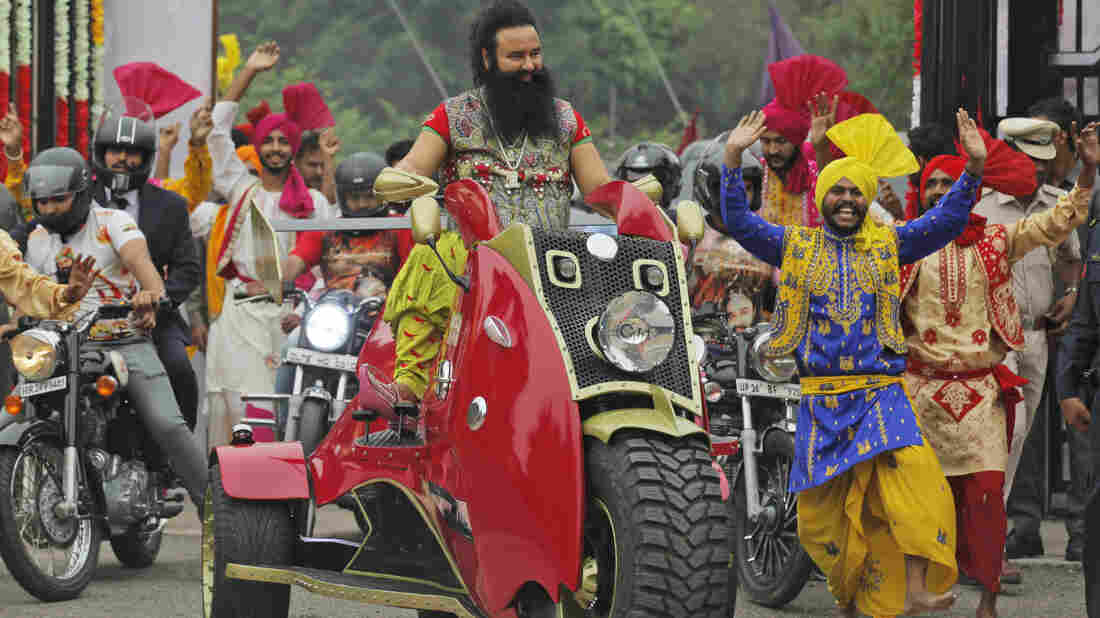 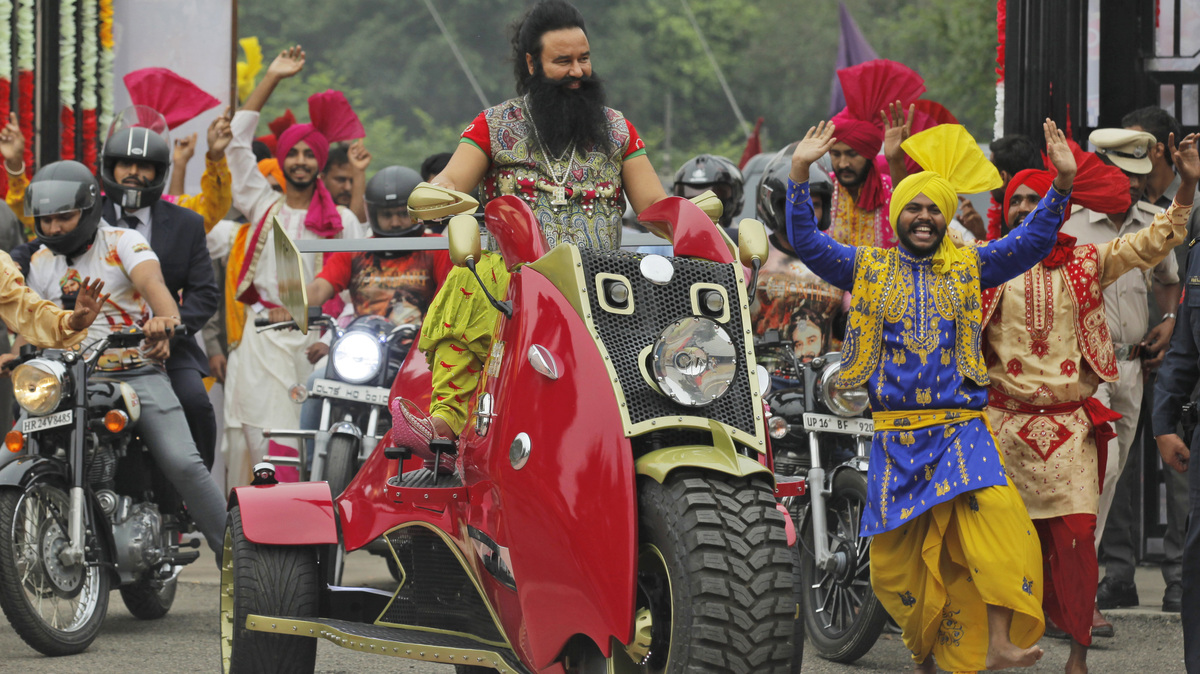 Tens of thousands of angry followers of Gurmeet Ram Rahim Singh — who calls himself the "Guru of Bling" — forced a lockdown in cities in northern India on Friday, after a court convicted the guru of raping two of his followers. Local media report that at least 28 people have died in the unrest.

Protesters set fires and clashed with police and security officers in two states, Haryana and Punjab, after a court in Panchkula announced it had found the guru guilty.

"Followers of the flashy self-styled religious leader warned that his legal day of reckoning would be bloody," NPR's Julie McCarthy reports from New Delhi. After the verdict was announced, Julie says, his supporters "cut a swath of destruction across the city of Panchkula, where a curfew is now imposed. The army is reported to have moved in to take control and dispersed the crowds who had pelted stones and broke barricades."

Punjab and Haryana High Court orders attachment of entire property of Dera Sacha Sauda to compensate for the damage caused.

The violence prompted the Punjab and Haryana High Court to order the seizure of the sect's property, says attorney Navdeep Singh. The group says the court's findings are "unjust."

After hours of clashes between demonstrators and police, Prime Minister Narendra Modi said Friday, "The instances of violence today are deeply distressing. I strongly condemn the violence & urge everyone to maintain peace."

Anticipating a verdict in the case, the guru's followers had streamed into the part of Haryana state where the decision was announced. In an attempt to maintain order, officials sent some 17,000 troops to Panchkula, the Times of India reports.

"Ram Rahim will be sentenced on Monday and was flown out of Panchkula in a government helicopter," NDTV reports. 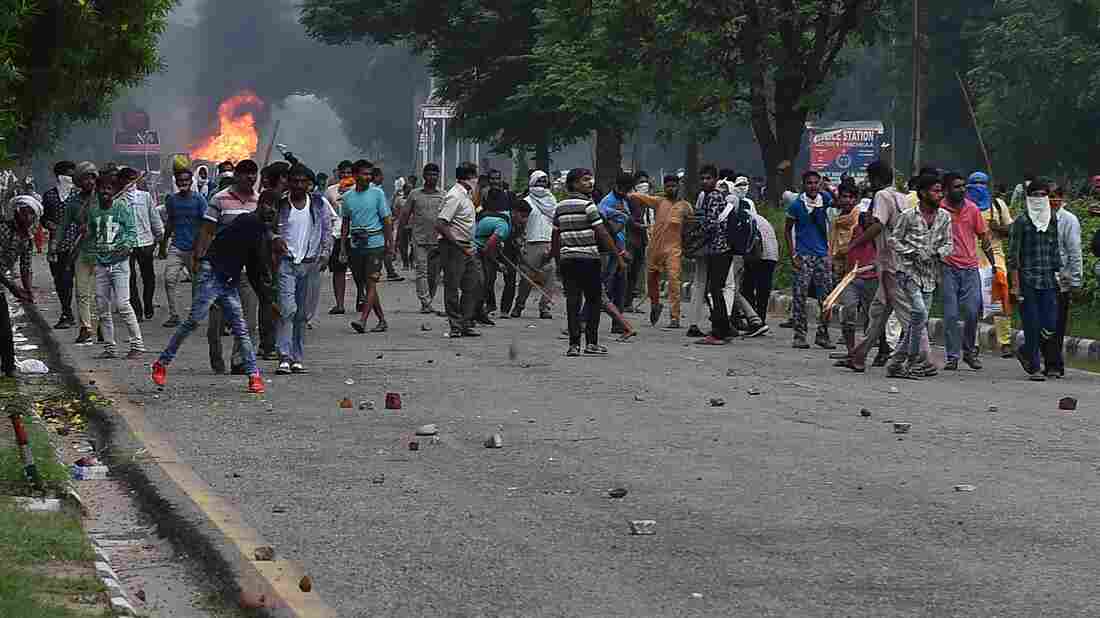 Some of the tens of thousands of Gurmeet Ram Rahim Singh's followers who gathered this week in Panchkula in Haryana state are seen throwing stones at security forces during clashes after the controversial guru was convicted of rape. Money Sharma/AFP/Getty Images hide caption 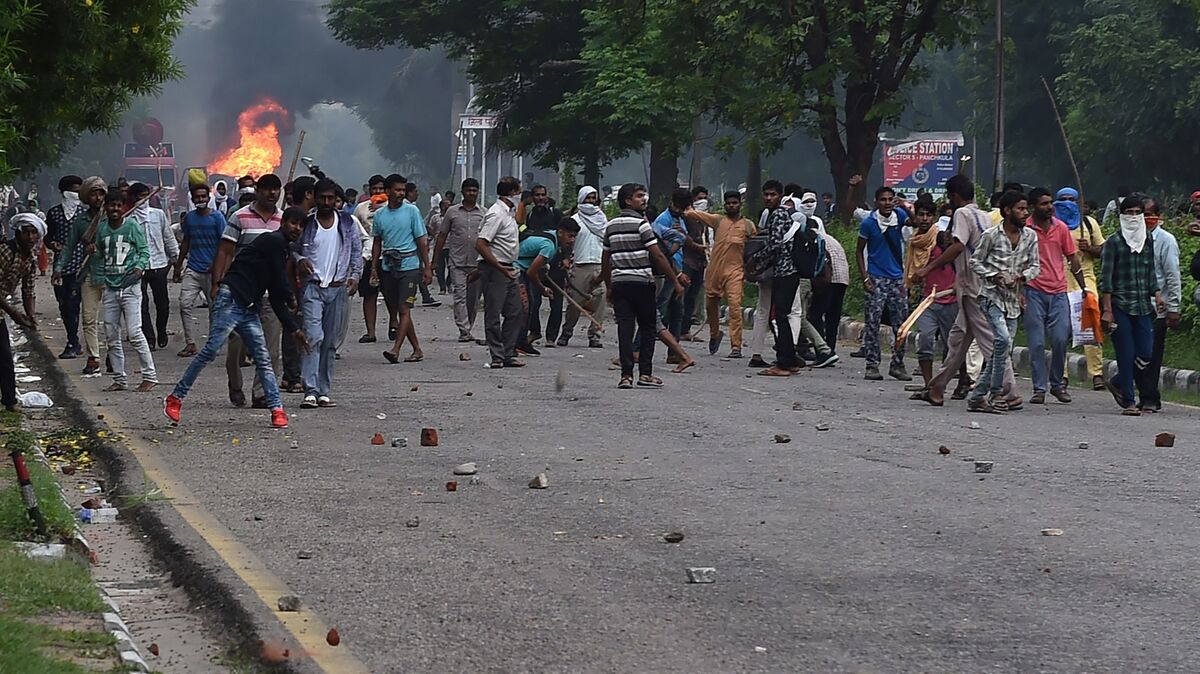 Some of the tens of thousands of Gurmeet Ram Rahim Singh's followers who gathered this week in Panchkula in Haryana state are seen throwing stones at security forces during clashes after the controversial guru was convicted of rape.

"Many Indians said they had not heard of Rahim before this week, and the mayhem that's overtaken a city in Haryana took them by surprise," Julie reports. She adds that officials' efforts to prevent a mass demonstration failed: "Train service had been canceled and school and offices shut down. Authorities have been sharply criticized for allowing thousands to mass near the courthouse, and for not sealing off the area."

As they prepared for potential trouble, local and regional officials on Thursday suspended mobile web services for 72 hours in Haryana and Punjab — a move that drew criticism on Friday, as some of those same leaders attempted to use Twitter and other platforms to call for calm.

Adding to the controversy is the fact that the guru is both popular and "politically connected," Julie says, "which critics say allowed him to operate with impunity."

Ram Rahim Singh, 50, is the flamboyant, motorcycle-riding head of Dera Sacha Sauda, a sect that was founded in 1948. The spiritual group is known for giving blood and other charitable acts — but also for producing music and videos featuring Singh, sometimes under nicknames like the "Guru of Bling" or "Messenger of God."

He has led the sect, commonly referred to as Dera, since 1990. The case against him dates back to 2002, when a claim of sexual harassment was lodged. It took years to develop formal charges against the leader, even after two women gave statements under oath in 2009 and 2010.

Along the way, the guru has faced other legal troubles and controversies — as in 2012, when India's Central Bureau of Investigation looked into reports that the guru had ordered 400 of his male followers to be castrated.

And as The Hindu reports, Ram Rahim Singh "also faces allegations of two murders, including that of a journalist, and had also courted controversy for dressing up as Guru Gobind Singh in 2007 leading to widespread protests in Punjab."