Accessibility links
At Least 2 Killed While Tropical Storm Harvey Lingers Over Texas : The Two-Way Two people were reported dead, and several others injured on Saturday. Rainfall could reach 40 inches and "cause life-threatening flooding," said Mike Brennan of the National Hurricane Center.

At Least 2 Killed While Tropical Storm Harvey Lingers Over Texas

At Least 2 Killed While Tropical Storm Harvey Lingers Over Texas

Tropical Storm Harvey remains a serious threat as it continues a slow march across Texas, killing at least two people, even as the National Hurricane Center downgraded it from a hurricane on Saturday.

While the wind was weakening, the rain proved to be relentless.

"We could see isolated areas with rainfall amounts as much as 40 inches, and that's going to cause life-threatening flooding over the next several days," said Mike Brennan, senior hurricane specialist at the National Hurricane Center. "We're really looking at a multiday rainfall disaster unfolding." 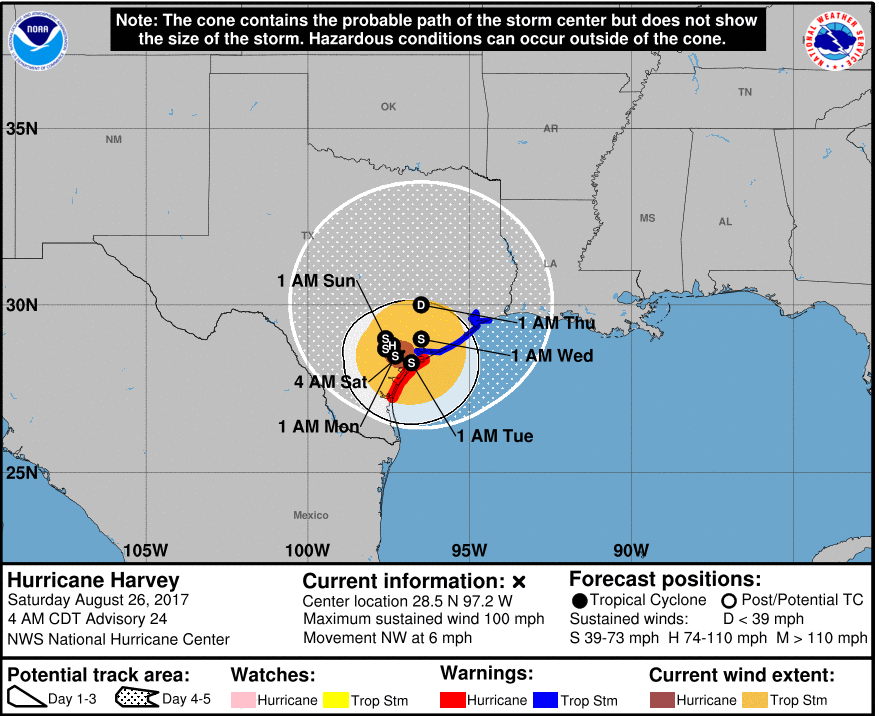 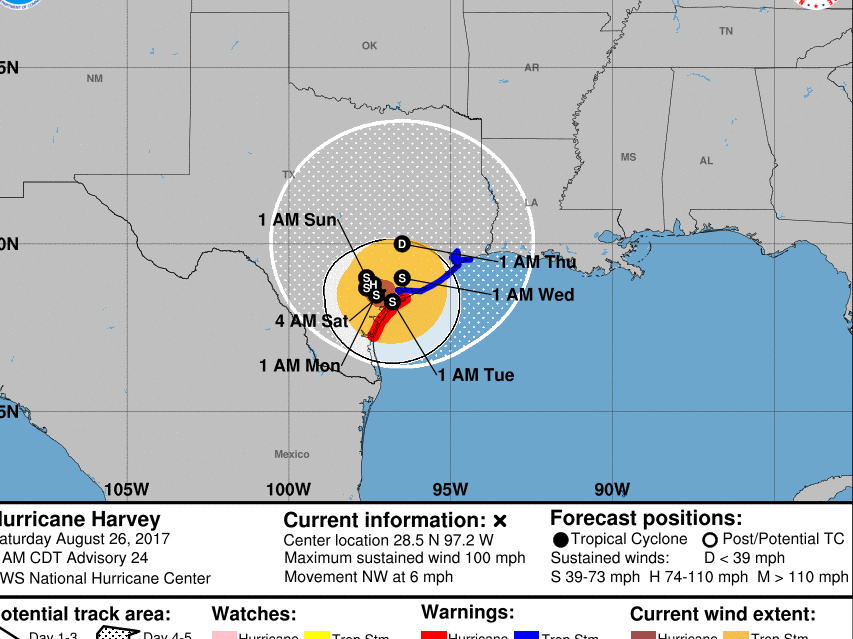 Harvey is expected to linger for the next few days, dropping significant rainfall over Texas.

When Harvey hit land about 30 miles northeast of Corpus Christi around 10 p.m. CT Friday, it was a massive Category 4 storm bringing winds of 130 mph, says The Associated Press. It was the strongest hurricane to hit Texas in decades.

It took Harvey just a few hours to drop to a Category 1 hurricane, and by around 1 p.m. CT Saturday, it had been downgraded to a tropical storm, with maximum sustained winds of 70 mph.

Closely monitoring #HurricaneHarvey from Camp David. We are leaving nothing to chance. City, State and Federal Govs. working great together!

By 7 a.m. CT Saturday, Harvey was centered less than 50 miles from the middle Texas coast near the city of Victoria, Brennan said, and moving north-northwest at around 6 mph.

"The center of Harvey is going to meander here over the middle Texas coast basically through the weekend and into the early and middle portions of next week and that is going to result in catastrophic flooding — life-threatening flooding," Brennan said. "We're seeing tide levels, storm surge inundation reports, of still 4 to 5 feet above ground level among portions of the middle Texas coast." 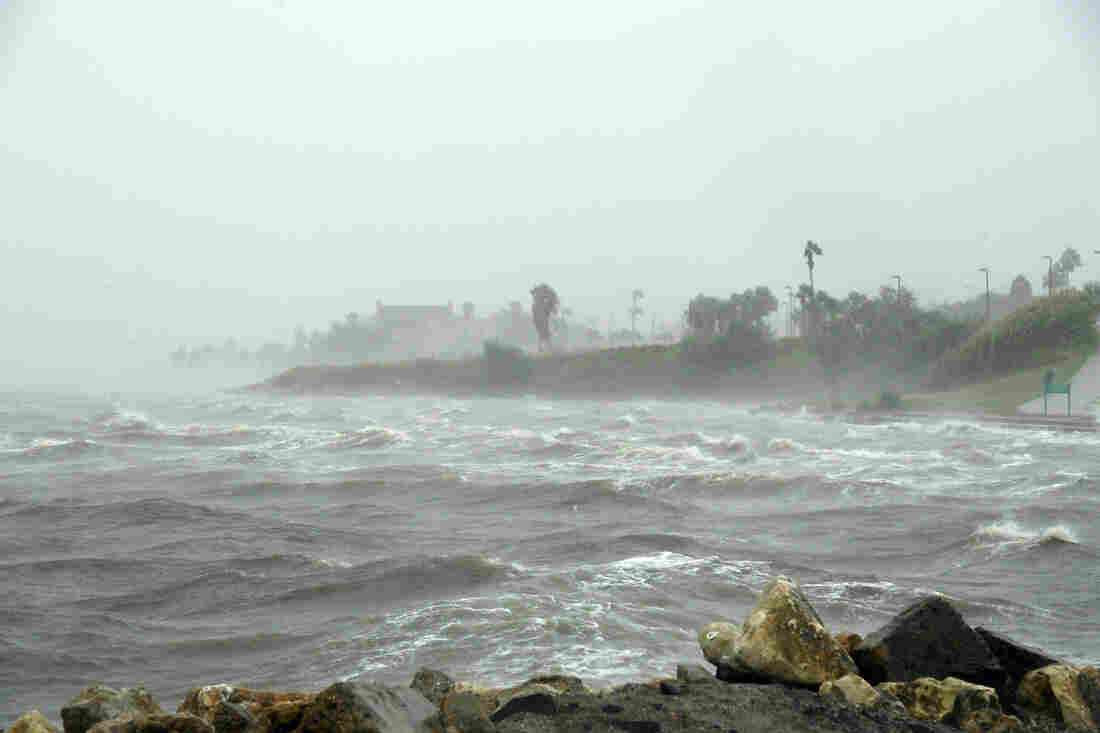 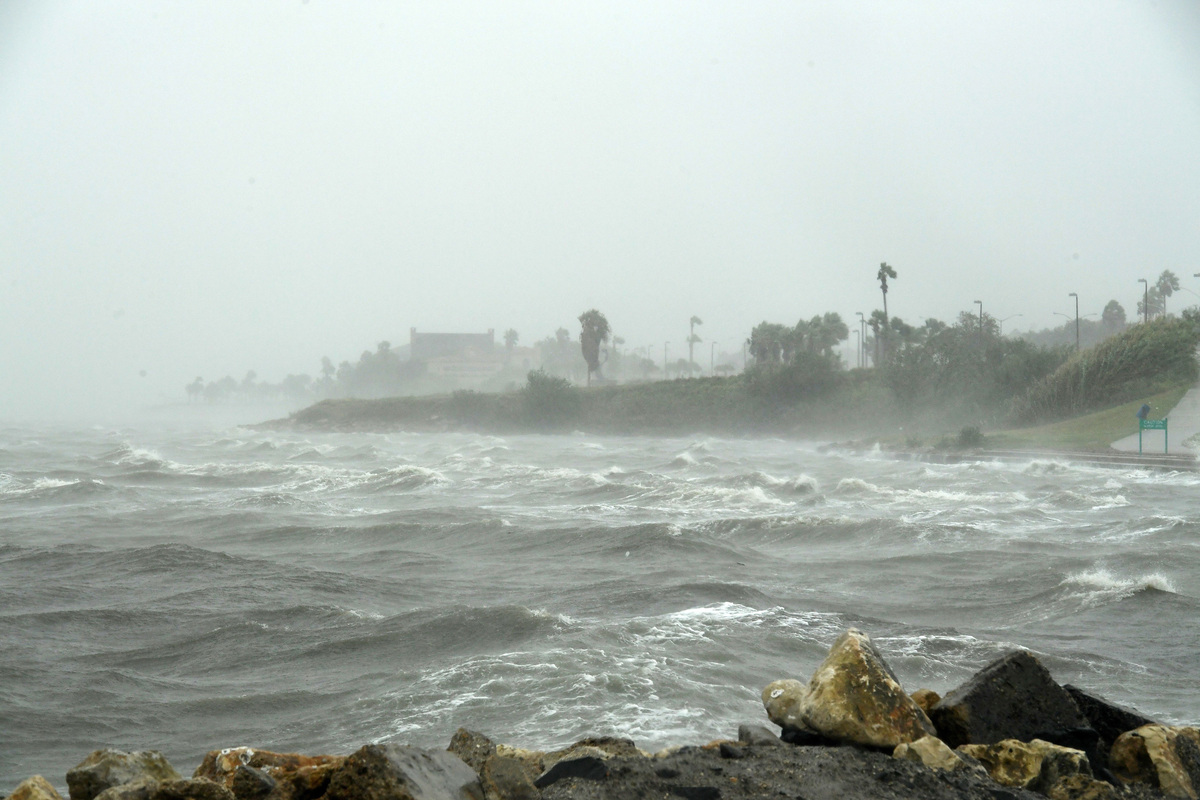 In the small coastal city of Rockport, Texas, a local county judge said one person has died as a result of the storm. The judge also said that the number of injured had risen to about 12 to 14 individuals.

Earlier in the day, City Manager Kevin Carruth told media outlets at least 10 people were being treated for storm-related injuries. Among the injured were people at a senior housing complex where the roof had collapsed. A local jail was serving as a makeshift hospital, Carruth said.

If you venture outside, there are many active power lines down or compromised citywide. Proceed with extreme caution. #StaySafeCC

By late Saturday, one person was reported dead in Houston as floods spread throughout parts of the city.

On Saturday, more than 300,000 Texas residents were without power, according to the Electric Reliability Council of Texas.

"The state and various agencies remain very active in the search and rescue process and that will be one of the foremost tasks that we undertake in the coming days," the governor said.

On the ground in Corpus Christi, Texas

Much road debris and downed power lines. Most traffic lights are out. Please be patient. Let us get things safe for your return. #Harvey

Corpus Christi had already seen around 20 inches of rain by midday Saturday, according to Abbott.

The city's police department tweeted Saturday, "Much road debris and downed power lines. Most traffic lights are out. Please be patient."

The city urged "extreme caution" to those venturing outside because there were "many active power lines down or compromised citywide."

Corpus Christi has also issued a "precautionary" boil water notification "to ensure destruction of all harmful bacteria and other microbes." Residents are being urged to limit toilet and faucet use because power was knocked out at the city's wastewater treatment plants. 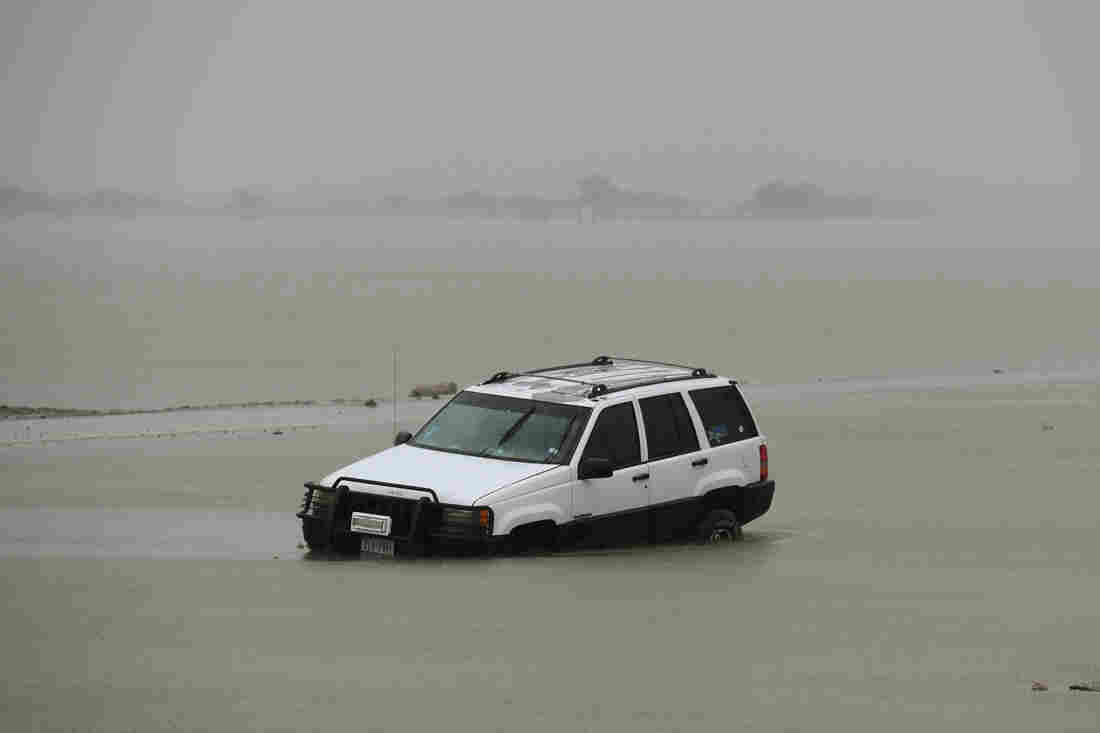 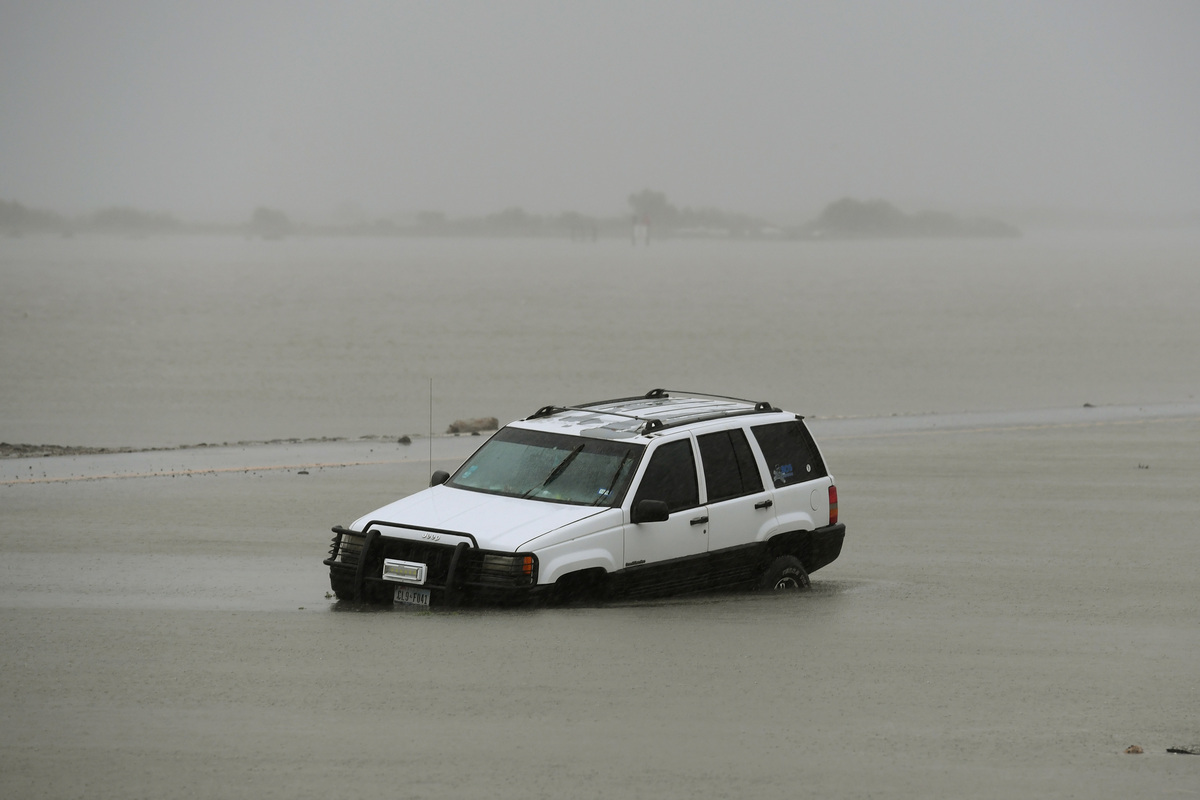 A car is partially submerged after Harvey hit Corpus Christi.

On Friday, Lewis reported that he could see shingles blowing off the hotel. He said there were hundreds of Corpus Christi residents who opted to hunker down at the hotel rather than leave town.

On Friday, Abbott had urged residents between Corpus Christi and Houston "to strongly consider evacuating." But Houston Mayor Sylvester Turner tweeted Friday, "Please think twice before trying to leave Houston en masse. No evacuation orders have been issued for the city."

Houston, the nation's fourth biggest city, is notoriously prone to flooding, reports the AP. By Saturday morning, high-water areas were already reported in the city, according to The Houston Chronicle.

A reporter with The Texas Tribune tweeted that three prisons near Houston were being evacuated, affecting about 4,500 inmates, as a nearby river rose.

The capital city of Austin, about 165 miles west of Houston, could see up to 20 inches of rain over the coming days, reports NPR's Windsor Johnston.

3 Texas prisons are now being evacuated near Houston as the nearby river rises. #HurricaneHarvey #Harvey pic.twitter.com/gEaZt2sNzV

Nevertheless, Austin Office of Homeland Security and Emergency Management spokesman Jake Dirr tells Johnston that the city is preparing to take in evacuees from harder-hit areas and is asking for volunteers to assist.

A complicating factor on Saturday was a tornado threat for the middle and upper Texas coast, which remains in effect throughout the day, Brennan said.

Houston was under a tornado watch on Saturday, meaning tornadoes could form at any time. The city reported that tornadoes "have already formed and caused damage in neighboring communities this morning."

An EPA statement said Pruitt determined "extreme and unusual fuel supply circumstances exist in portions of Texas as a result of the hurricane, and has granted a temporary waiver to help ensure an adequate supply of gasoline is available in the affected areas until normal supply to the region can be restored."

On Friday, President Trump approved a federal disaster declaration for impacted areas, freeing up funding for aid including temporary housing.