Accessibility links
Baltimore Took Down Confederate Monuments. Now It Has To Decide What To Do With Them : The Two-Way Speaking about monument removals across the U.S., Mayor Catherine Pugh says, "They're coming down so fast, I don't know if we have enough museums to house them or enough cemeteries to stick them in." 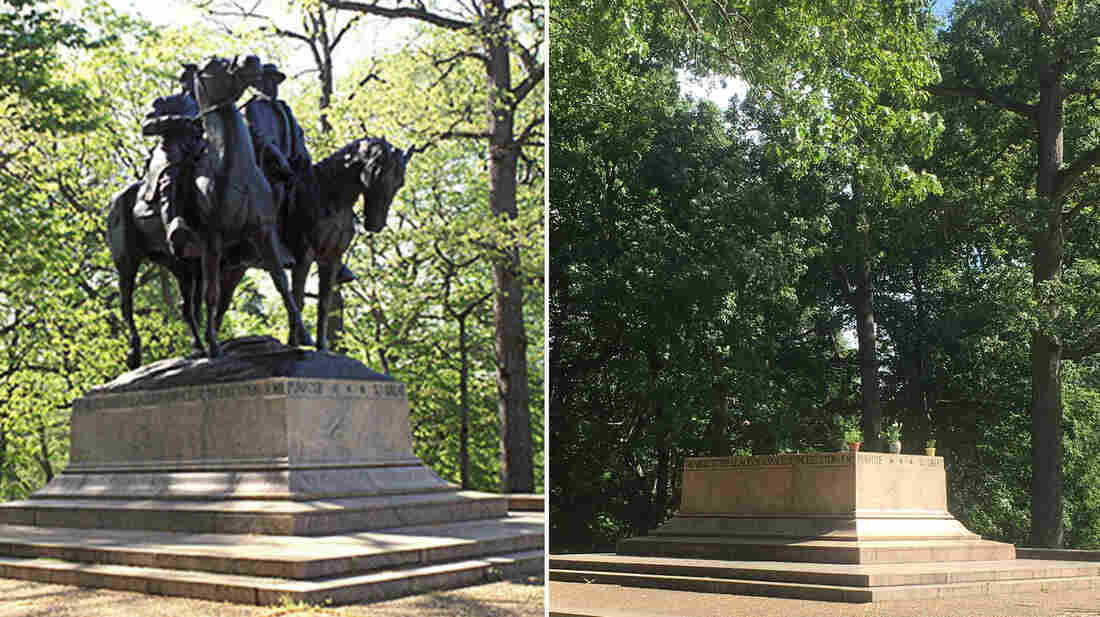 Baltimore's statue of Confederate Gens. Robert E. Lee and Stonewall Jackson before it was removed (left); now, the platform is empty except for a few potted plants. Mark Goebel/Flickr; Merrit Kennedy/NPR hide caption

If you walked into Baltimore's Wyman Park Dell two weeks ago, a statue of Confederate Gens. Robert E. Lee and Stonewall Jackson on horseback would have towered above you.

There's an inscription on the base that reads, "They were great generals and Christian soldiers and waged war like gentlemen." But now, there's nothing atop the pedestal except for a few potted plants.

On Aug. 16, under the cover of darkness, Baltimore removed four statues of figures with Confederate ties in a five-hour operation ordered by Mayor Catherine Pugh.

The Lee-Jackson statue and three others are now in a city lot, covered and protected. The location is being kept secret. And Baltimore is trying to figure out what to do with them. Pugh says she has appointed a working group of city officials to weigh the options for where the statues should go.

Other cities across the U.S. that have taken down controversial monuments are grappling with the same questions.

"They're coming down so fast, I don't know if we have enough museums to house them or enough cemeteries to stick them in," Pugh says of those works. 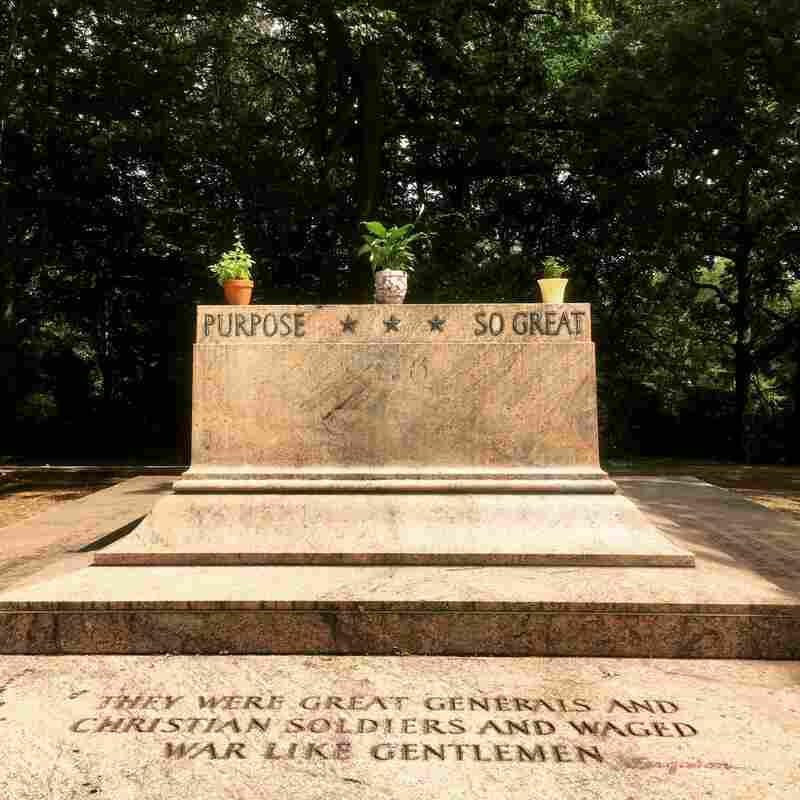 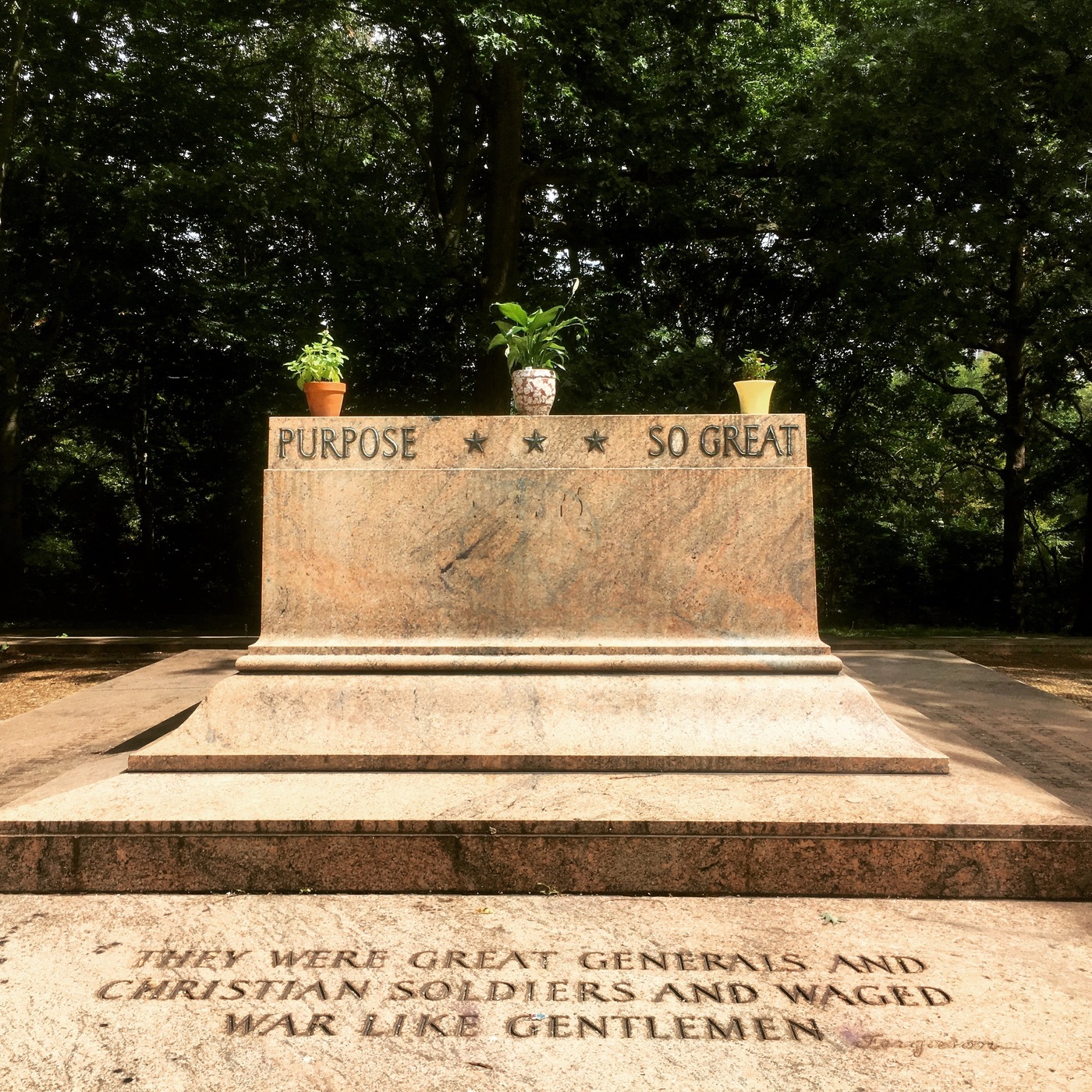 Baltimore removed four statues with Confederate ties on Aug. 16 under the cover of darkness, in a five-hour operation ordered by Mayor Catherine Pugh.

Baltimore's mayor says she took action quickly and quietly because she was worried about violence in the aftermath of Charlottesville, Va., where plans to remove a statue of Lee became a rallying point for white nationalists.

Pugh says that because of safety concerns, only she and the contractor knew the removals were happening until right before the operation started.

The statues had already been a matter of city debate for years. In 2015, a panel of scholars heard comments from more than 200 people about whether the statues should stay or go and what should be done with them if they were removed.

"There were a wide variety of opinions about the statues and about how we should remember Baltimore's complicated situation during the Civil War and how we should remember the Jim Crow era here," says University of Baltimore history professor Elizabeth Nix, who was part of that commission. "Really, those statues are products of the Jim Crow era and not the Civil War."

During the war, Maryland was a slaveholding state that never seceded from the Union. It had three times more soldiers who fought for the Union than for the Confederacy. And after the war, Nix says, many former Confederates moved to Baltimore.

"Those monuments that went up were definitely a message to the thriving black professional class that white supremacy still reigned in the city," Nix said. In a deeply segregated city, these issues still resonate.

One of those four statues, for example, depicts Roger Brooke Taney, the chief justice of the United States who oversaw the infamous Dred Scott Supreme Court decision. While Taney wasn't a Confederate figure, the statue is seen as having ties to the Confederate cause. His majority opinion in 1857 stated that African-Americans could not be considered citizens — and by extension the decision treated black people as property, not people.

She recommended placing the Lee-Jackson monument in context — at the Chancellorsville Civil War battlefield in Virginia. The monument depicts the generals prior to that battle, where Jackson was fatally wounded. 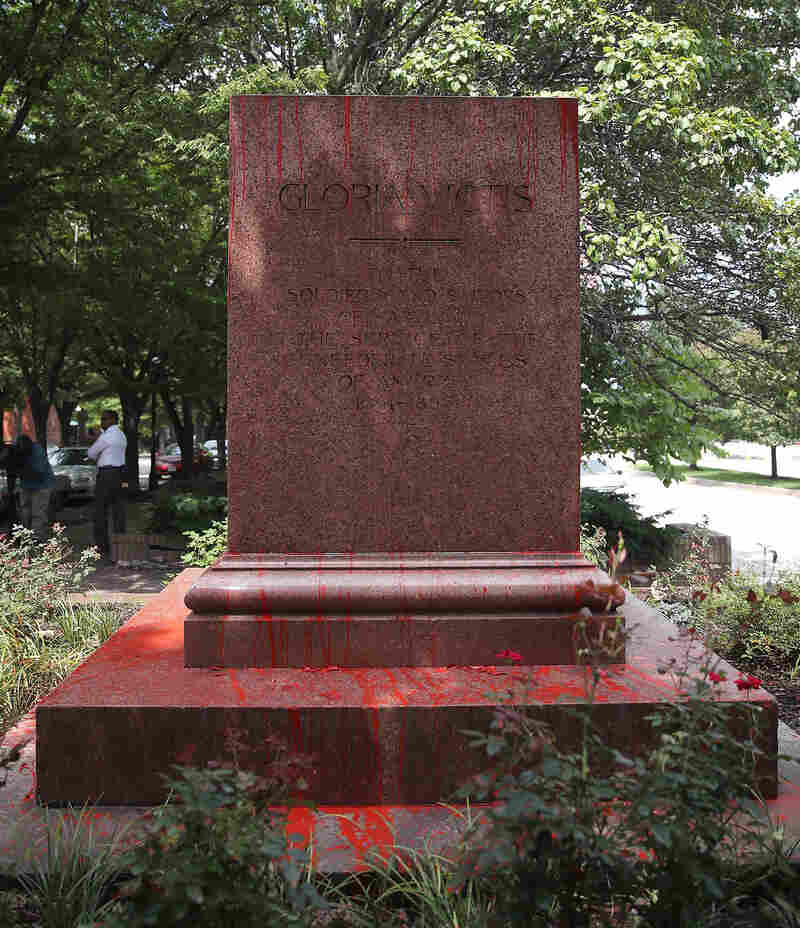 Red paint was thrown on the pedestal in Baltimore where the Confederate Soldiers and Sailors Monument once stood before city workers removed the statue on Aug. 16. Mark Wilson/Getty Images hide caption

City Councilman Brandon Scott doesn't want Confederate statues put on any public land: "Because you're saying we don't want it here because it's disrespectful to the black people here, the women here, etc., but you send it there and those people have to see it each and every day."

He has a more radical idea. "Personally I think that they should be melted down and repurposed for statues that can show true Baltimoreans and true American, great American history," Scott says.

The councilman suggests that the materials could be used to depict people such as abolitionist leader Frederick Douglass or Thurgood Marshall, the first black Supreme Court justice.

That's unlikely to happen, though, because the mayor says she doesn't want to destroy the statues. "I think that we should be pushing love, respect, how we work together and move our country forward. That does not come in the context of where I'd like to see us go," Pugh says.

Pugh likes the idea of using these public spaces to honor people who have made positive contributions to Baltimore. She also doesn't want people to forget what stood there before.

"Because I think it is important that people know what did stand there and why. And the reasons for which they came down," Pugh says. She says proposals are coming in from artists, and reads an email aloud off her phone from an African-American artist who wants to paint the pedestals in a way that would educate people about the site's history.

"I think that's an awesome proposal," Pugh says, "But these kinds of decisions should not be made alone." She says there is no timeline yet for determining what will happen to the statues or the sites.

Dereck Mangus works at the Baltimore Museum of Art, down the street from the Lee Jackson site. He eats his lunch here every day and says he has never seen so many visitors looking at the empty space.

"It's just sort of funny in a way, people wanting to see that which is no longer there," Mangus says.

Charles Hopwood, a retired city employee, is one of those visitors. "Keeping it empty makes a statement on its own," he says as he looks up at the pedestal. "And have a little sign in front of it with a picture of what was here and what isn't.

"That's making a historical statement on its own."