Accessibility links
What's Next After North Korean Missile Test? Launch Rattles South Korea, Japan : The Two-Way Some people in Japan woke with unease to a text saying: "Seek shelter," while in South Korea, the response was defiant. In the U.S., President Trump said Pyongyang's message landed "loud and clear." 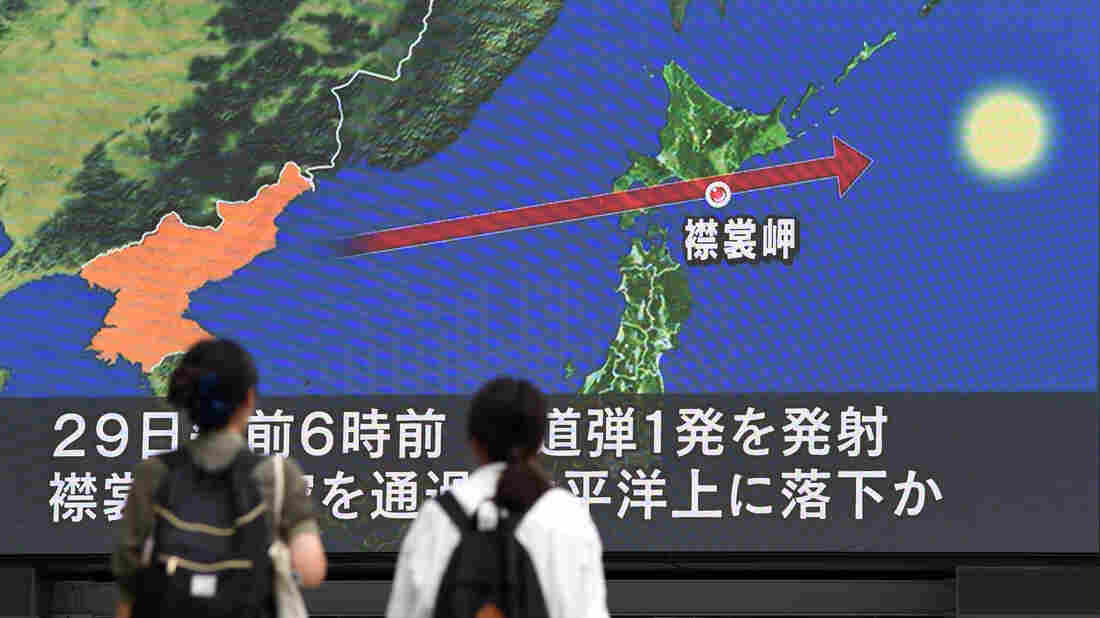 Passers-by look at the North Korean missile's path over Japan, displayed on a huge screen in Tokyo on Wednesday. Japanese Prime Minister Shinzo Abe said he and President Trump have agreed to increase pressure on Kim Jong Un's regime after it launched a ballistic missile over the Japanese island of Hokkaido. Toshifumi Kitamura/AFP/Getty Images hide caption 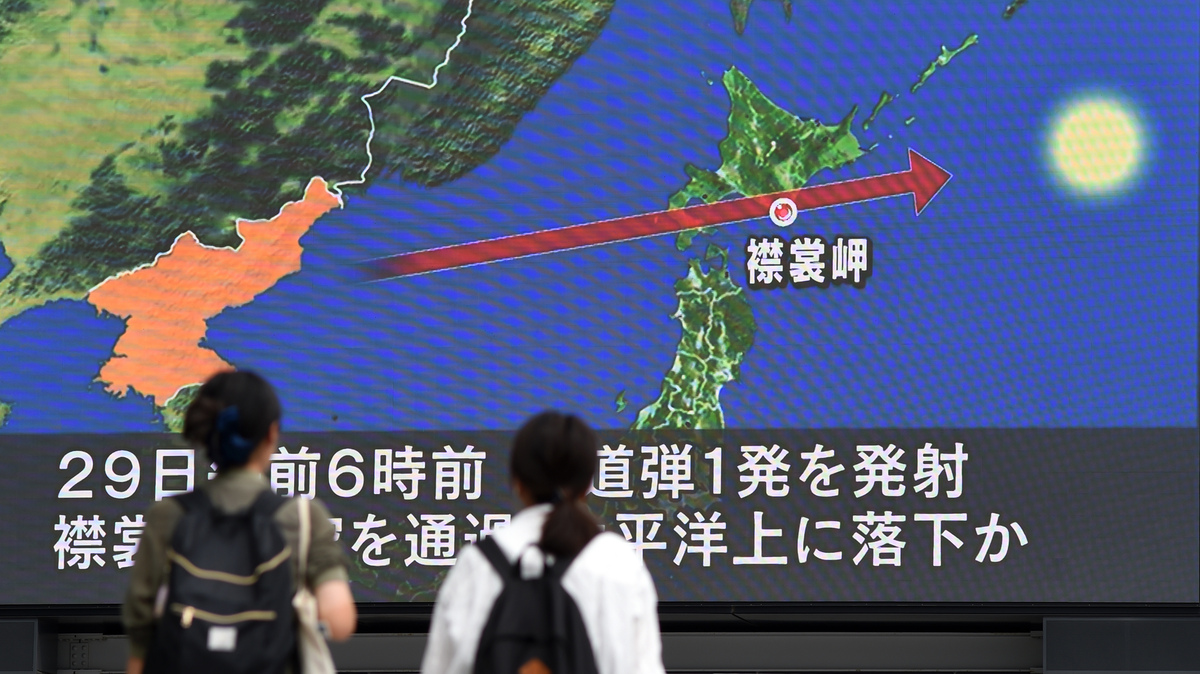 Passers-by look at the North Korean missile's path over Japan, displayed on a huge screen in Tokyo on Wednesday. Japanese Prime Minister Shinzo Abe said he and President Trump have agreed to increase pressure on Kim Jong Un's regime after it launched a ballistic missile over the Japanese island of Hokkaido.

In the early hours of Tuesday local time, North Korea fired a ballistic missile over the Japanese island of Hokkaido and into the Pacific Ocean. While the missile may only have hit the waters off Japan's eastern coast, President Trump said Pyongyang's message landed "loud and clear."

"This regime has signaled its contempt for its neighbors, for all members of the United Nations, and for minimum standards of acceptable international behavior," Trump said in a statement after the test launch.

"Threatening and destabilizing actions only increase the North Korean regime's isolation in the region and among all nations of the world. All options are on the table."

Japanese President Shinzo Abe said the missile — the fourth North Korea has fired in four days and the first it has fired over Japan since 2009 — was "an unprecedented, grave and critical threat."

Japan Is On High Alert After North Korea Missile Launch

Japan Is On High Alert After North Korea Missile Launch

"It is an act that significantly diminishes the region's peace and security," Abe added, "and we have lodged a firm protest."

The United Nations Security Council, at an emergency meeting Tuesday, said it "strongly condemns" the latest missile launch as an "outrageous" threat against Japan and demands that the launches stop. Less than a month ago, the council unanimously approved a stringent package of sanctions on Pyongyang, aiming to further isolate the already-sequestered regime and to cut about a third of its annual export revenue.

The U.S. Treasury Department also drew up sanctions of its own last week on entities in China and Russia — two other permanent members of the Security Council — aimed at further eroding Pyongyang's sources of funds.

The new South Korean administration, which at times has broadcast its desire for diplomatic talks, sent a markedly more hawkish message after the launch, promptly releasing a video purportedly showing its own missile tests last week.

And mere hours after the North's test, the South's military reportedly announced that it had sent four fighter jets on a live-bombing drill simulating an attack on Kim Jong Un's regime. They dropped eight 1-ton bombs on a hillside, demonstrating their capacity to bust underground bunkers.

"Our Air Force will wipe out the leadership of the North Korean regime with the strong strike capability if it threatens the security of our people and the South Korea-U.S. alliance with nuclear weapons and missiles," the leader of the training mission said in a statement, according to the Yonhap news agency.

The defiant message from Seoul contrasts with a deep sense of unease among many Japanese citizens, however, especially on the big island that for a few brief moments stood in the missile's shadow. Residents on Hokkaido reported waking to sirens in some towns and an ominous text from the government: "Missile alert, missile alert. You are advised to seek shelter in a sturdy building or go underground."

In one Hokkaido city, according to The Guardian, metro riders found their commute delays explained with a sign: "All lines are experiencing disruption," it read. "Reason: Ballistic missile launch."

This unease rippled through markets across the world Tuesday. The Dow Jones industrial average plummeted triple digits at its open on news of the new North Korean test, and stock markets in Asia and Europe took tumbles of their own.

Still, it remains unclear what, if anything, world powers can do about it.

"These North Korean missile tests are emblematic of the ongoing security dilemma where there are hostile parties taking steps to deter the other," John Delury of Yonsei University told CNN, "and each improvement on one side's deterrent capability is a provocation to the other side."

As one of the few countries still on friendly terms with the North, China remains a focal point of any potential international response. Though Beijing approved the U.N.'s stricter sanctions recently, Chinese leaders again sounded a cautionary note in the wake of the new test.

The tensions on the Korean Peninsula are "at a tipping point, approaching a crisis," Chinese Foreign Ministry spokeswoman Hua Chunying said at a news briefing Tuesday, according to an Agence France-Presse translation. "At the same time, there is an opportunity to reopen peace talks."