Accessibility links
Update: Harvey Makes Landfall In Louisiana As Houston Copes With Record Rainfall : The Two-Way The death tally left by the now-tropical depression rose Wednesday as recovery workers in Harris County were able to reach a white van that a rescued man had told them held several family members.

The National Hurricane Center says Harvey is now a tropical depression. As of 8 p.m. ET, the storm was located southwest of Alexandria, La., with sustained winds of 35 mph.

As Tropical Storm Harvey, it had made landfall in Louisiana, at 4 a.m. Central time, just west of Cameron, according to the Center.

The confirmed death toll from Harvey is at least 25, across five Texas counties — although that figure is likely to rise and does not include people who are missing or believed dead. 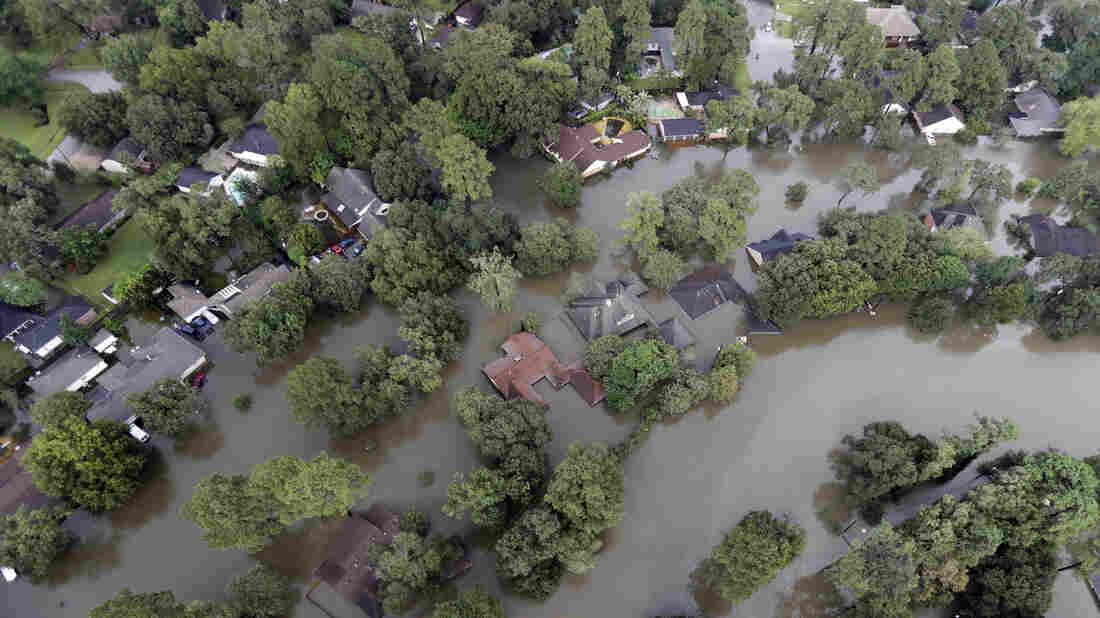 With clear daylight breaking over parts of eastern Texas on Tuesday, scenes of devastating flooding are emerging. These homes are in Spring, Texas. David J. Phillip/AP hide caption 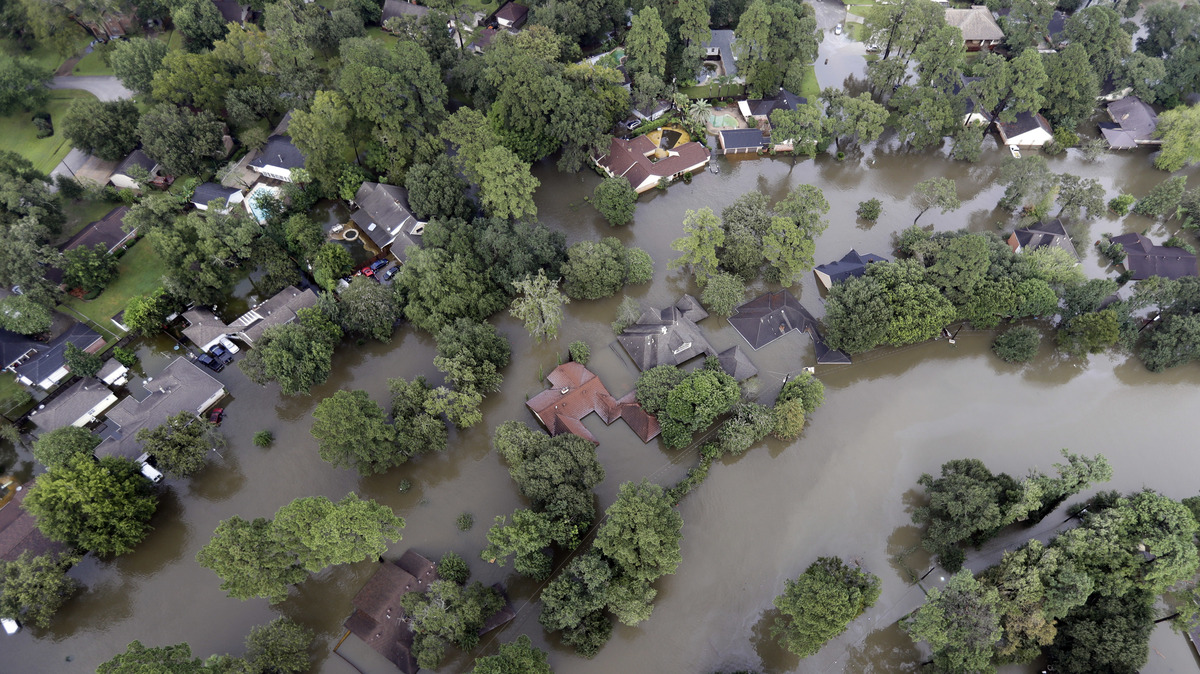 With clear daylight breaking over parts of eastern Texas on Tuesday, scenes of devastating flooding are emerging. These homes are in Spring, Texas.

A storm surge warning was issued for a large swath of Louisiana's coastline, stretching from Holly Beach east to Morgan City. Parts of Louisiana and Texas were under flash flood warnings through Wednesday morning, affecting areas where hundreds of thousands of people live, and flash flood watches extend northeast through Alabama, Arkansas, Tennessee and Kentucky.

More than 32,000 people are in shelters, Texas Gov. Greg Abbott said at a news conference. He said that a federal disaster was declared in 14 additional counties, bringing the total to 33 in the state.

We are sad to report we have found a van inundated by Greens Bayou flooding while purportedly carrying 6 family members Sunday. #harvey pic.twitter.com/zFhS3J7fRC

The death tally rose Wednesday after recovery workers in Harris County were finally able to reach a white van that a rescued man had told them was holding several family members. At that time on Sunday morning, the van was seen under at least 4 feet of fast-moving water and no rescue attempts could be made.

The tragedy took place at Greens Bayou, and six people are confirmed to have died in the van. Harris County Sheriff Ed Gonzalez told reporters that police initially viewed two bodies, but when the water receded, they found the remains of four minors in the back of the vehicle. Gonzalez says they were all members of the Saldivar family.

The sun is finally trying to shine here in Houston. Blue skies on the horizon. pic.twitter.com/5N1uqlfySf

Harvey's slow movement away from southeast Texas promises some relief from relentless rains that have inundated large swaths of Houston, Beaumont and other areas since a downpour began late last week. Late Tuesday, some Houston residents glimpsed something they hadn't seen for days: the sun.

Harvey dumped nearly 52 inches of rain at one location east of Houston, the National Weather Service said, breaking the record for the greatest amount of measured single-storm rainfall for the continental U.S. (In Hawaii, Cyclone Hiki set the national record of more than 52 inches in 1950.)

Houston and surrounding areas face the threat of more flooding from rivers and reservoirs. In Brazoria County, where a levee at Columbia Lakes breached Tuesday, the Brazos River remained at nearly 10 feet above its 43-foot flood stage.

In Harris County, flood control officials say "almost all watersheds have crested (not rising!)" Wednesday morning. But water that started coursing over the Addicks Reservoir's spillway on Tuesday is still doing so Wednesday, and the U.S. Army Corps of Engineers is still releasing nearly 14,000 cubic feet per second‬ from the Addicks and Barker reservoirs west of downtown Houston.

This is the line at the @BakerRipley Shelter at @NRGParkFan -- these aren't the guests, they're the volunteers! #HurricaneHarvey pic.twitter.com/hnt92lGSJK

As NPR's Hansi Lo Wang reported, the Harris County Flood Control District says that some 4,000 homes have flooded because of the reservoir overflow.

There are also steep challenges for emergency and relief crews who are trying to help residents and evacuees relying on infrastructure that's been crippled.

Houston's superintendent of schools tells All Things Considered that classes may begin as scheduled on Tuesday, Sept. 5, but "it's 50/50 right now, we're still out doing a survey of all of our facilities." Richard Carranza notes that the district has 300 school buildings but, because of flooded neighborhoods, only 45 of the structures have been assessed.

But this storm has also shown the resilience of Texans — as evidenced by the sight Wednesday of a long line of people waiting outside a shelter at NRG Park that was opened by the Baker-Ripley community group. As Harris County Judge Ed Emmett said in a tweet, "These aren't the guests, they're the volunteers!"

In an update on the relief effort, FEMA Administrator Brock Long said that as of Tuesday night, 1,700 families were staying at more than 2,000 hotel and motel rooms across five states, via the Transitional Shelter Assistance Program.

Abbot told reporters Wednesday that 210,000 people have registered with FEMA for individual assistance and that more than $37 million has already been approved.

There was other good news Wednesday morning, when the National Weather Service office in Houston announced, "Our tropical storm warning, storm surge watch, and flash flood watch have all been canceled. Improving weather conditions to come!" 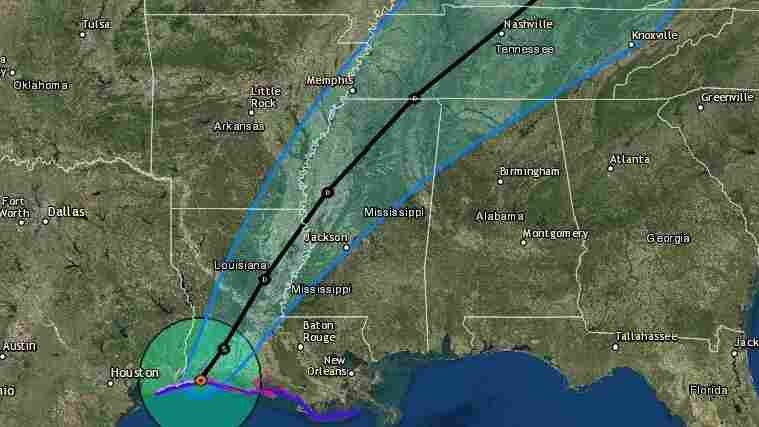 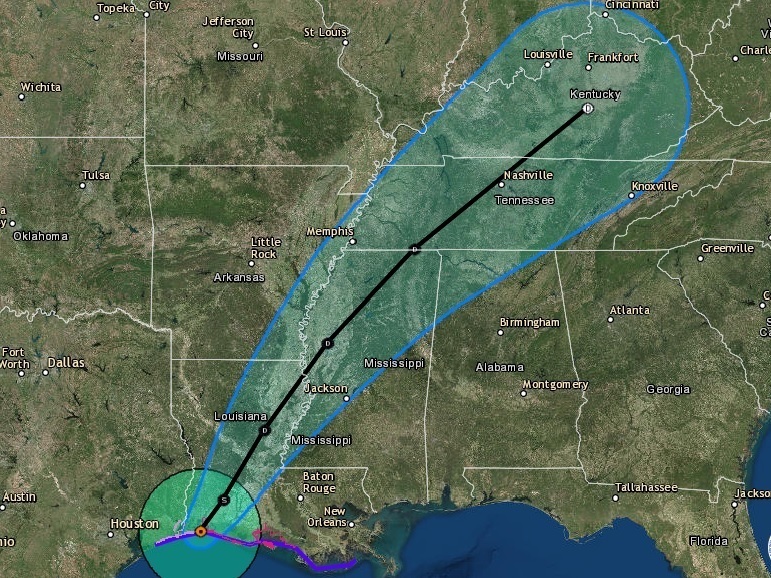 Federal and local agencies have saved more than 13,000 people from perilous floodwaters — and those rescue efforts are continuing, as some residents who tried to ride out the storm find themselves in need of aid and shelter.

Along the Texas/Louisiana border and north into western Kentucky, Harvey is expected to bring 3 to 6 inches of rain, the hurricane center says, warning of "isolated amounts up to 10 inches."

After Pressure Mounts, Joel Osteen Says His Houston Megachurch Is Open To Evacuees

As of 8 p.m. ET Wednesday, Harvey was moving north-northeast at about 8 mph. The NHC expects the storm's center to "move through central Louisiana tonight, then move through northeastern Louisiana and northwestern Mississippi Thursday and Thursday night."

Slow-moving storms can bring more potential for destruction as they hang over an area. Harvey was barely moving when it devastated neighborhoods and communities in Texas.

The NHC says the tropical depression's sustained winds of about 35 mph are down from a high of 130 mph when Harvey made landfall in Texas several days ago as a Category 4 hurricane.

However, Louisiana Gov. John Bel Edwards warned Tuesday that the storm "has tremendous potential to continue to drop heavy amounts of water, and to prevent people from going about their normal daily business in a safe manner."

New Orleans does not appear to be in the storm's primary path, but officials are still concerned about the potential for flooding — just as the city marked 12 years since the levees broke during Hurricane Katrina, flooding the area, destroying hundreds of thousands of homes and displacing even more people.

To make things worse for Louisiana's largest city, not all of the drainage pumps in New Orleans are working. "The city's pumping system has been under scrutiny since flooding earlier this month exposed infrastructure failures and unreported maintenance issues," NPR member station WWNO reports.

"People are just on edge" in New Orleans as they wait for the storm's impact, WWNO reporter Tegan Wendland told Morning Edition on Wednesday. "Every time it rains, people are left wondering if it's going to be a disaster."