Accessibility links
Fox News Goes Off The Air In Britain As U.K. Scrutinizes Company's Bid To Buy Sky : The Two-Way 21st Century Fox said it was a matter of poor ratings. But the move coincides with the company's efforts to get government approval for its $15 billion takeover bid of European media giant Sky. 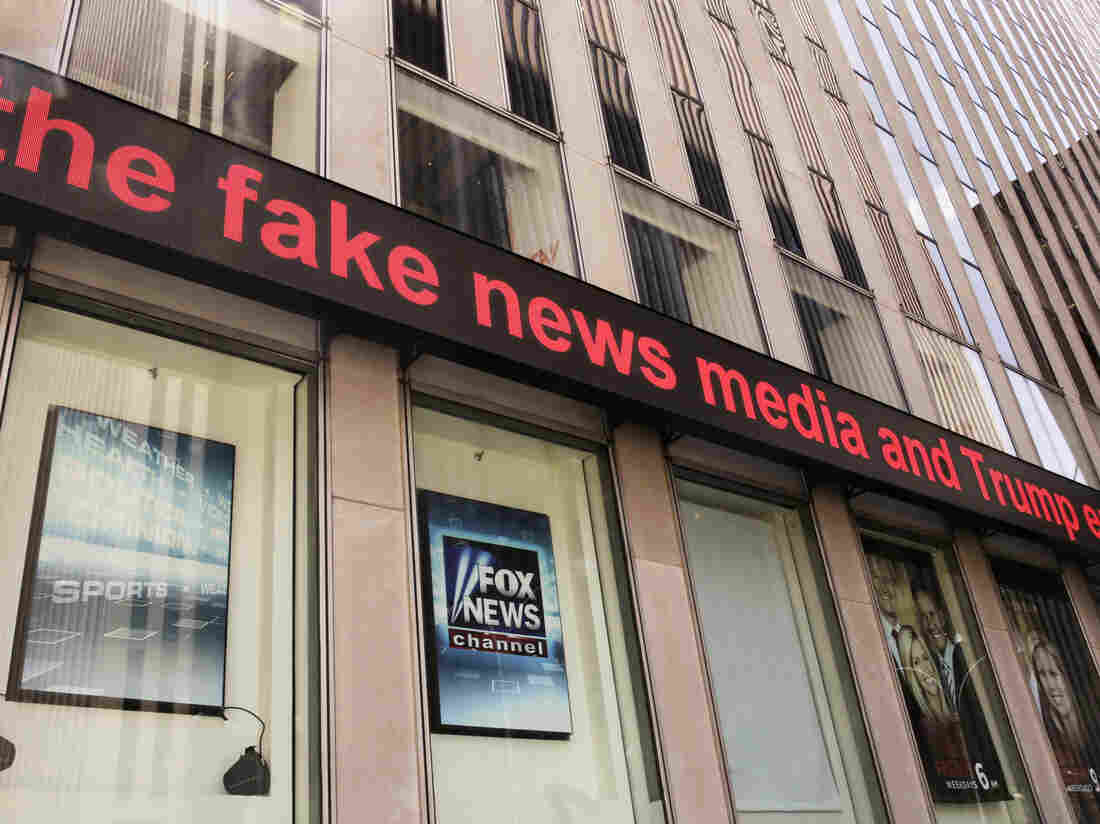 Fox News ceased broadcasting in the UK on Tuesday. Its parent company, 21st Century Fox, is trying to get government approval for its takeover bid of European media giant Sky. Above, headlines scroll across the Fox News studios in New York earlier this month. Richard Drew/AP hide caption 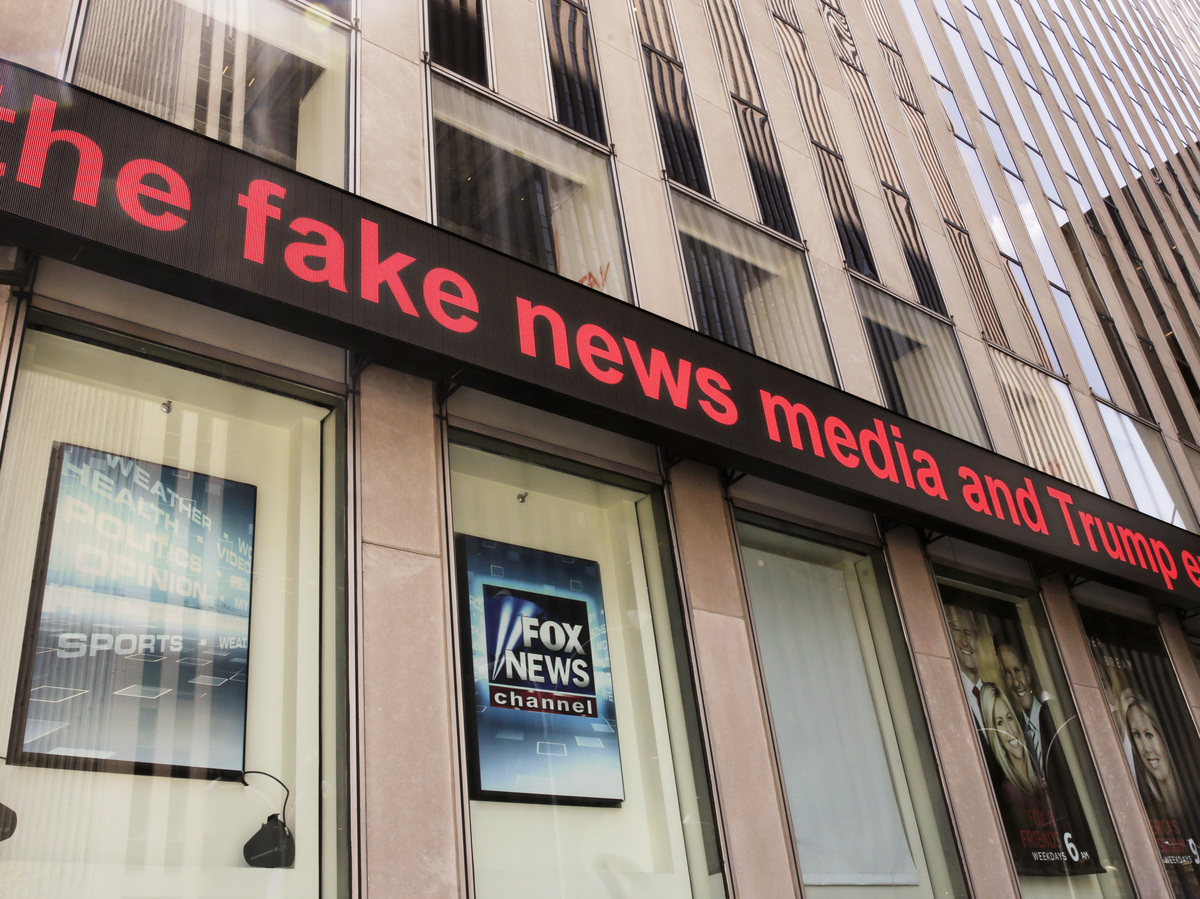 Fox News ceased broadcasting in the UK on Tuesday. Its parent company, 21st Century Fox, is trying to get government approval for its takeover bid of European media giant Sky. Above, headlines scroll across the Fox News studios in New York earlier this month.

At 4 o'clock Tuesday afternoon, Fox News went off the air in the U.K. But why its parent company decided to pull the network from Britain's airwaves is the question.

The channel's parent company, 21st Century Fox, said it was a matter of poor ratings.

"Fox News is focused on the US market and designed for a US audience and accordingly, it averages only a few thousand viewers across the day in the UK," the entertainment and television conglomerate said in a statement to NPR. "We have concluded that it is not in our commercial interest to continue providing Fox News in the UK."

But the Broadcaster's Audience Research Board, cited by the BBC, said the number is more than just a few thousand — the network averaged nearly 60,000 viewers a day this year.

The network's market size is important, because 21st Century Fox unveiled a $15 billion deal in December to buy the 61 percent of European media giant Sky that it doesn't already own.

The U.K.'s media regulator, Ofcom, has expressed concerns that the takeover of Sky would negatively affect the country's media and political landscape.

An Ofcom report in June concluded that the transaction "raises public interest concerns as a result of the risk of increased influence by members of the Murdoch Family Trust over the UK news agenda and the political process, with its unique presence on radio, television, in print and online."

Karen Bradley, the Secretary of State for Digital, Culture, Media and Sport, oversees media ownership and mergers. She has previously based her decisions on Ofcom's assessments, and while she hasn't yet made a final decision, she told Parliament in June that she was inclined to refer the deal to competition regulators.

"The proposed entity would have the third largest total reach of any news provider — lower only than the BBC and ITN — and would, uniquely, span news coverage on television, radio, in newspapers and online," Bradley said.

The Murdochs' decision to shut down Fox News in Britain may have been intended to reduce the likelihood that Bradley would refer the transaction to the Competition and Markets Authority and slow the deal. As Deadline Hollywood reports:

"If she seeks a competition review, then it could create problems for Fox. Reviews can take up to six months to complete, potentially putting a decision off until 2018.

Last time Rupert Murdoch tried to take over Sky, as NPR's David Folkenflik reported, a bribery and phone hacking scandal scuttled the bid, leading to "a parliamentary inquiry, the closing of their big Sunday tabloid, more than 100 civil lawsuits and the criminal convictions of several former Murdoch journalists, including an editor-in-chief."

This time, there has been pressure on regulators to take into account the network's scandals in the U.S.: an array of sexual harassment lawsuits, and a now-retracted story that spread conspiracy theories about the murder of DNC staffer Seth Rich.

Ofcom's report said it had considered the "extremely serious and disturbing" allegations of sexual and racial harassment at Fox News, but found that Sky would be a "fit and proper" holder of a broadcast license even if owned entirely by Fox.

There are also Britain-specific charges against the network, relating to its broadcasts on the day of the Brexit vote last June.

Ofcom says the network broke U.K. broadcasting rules that prohibit broadcasters from discussing and analyzing election and referendum issues while the polls are open. As The Guardian reports, a number of segments on Fox News that day not only discussed Brexit, they had a distinct point of view. "I don't know why any Brit, maybe I'm just too much of a Yank, why would any Brit wanna offshore its sovereignty to Brussels?" said one.

Ed Miliband, the former Labour leader and a longtime critic of Murdoch, told the Guardian that the decision to pull down the network was "yet more proof that the Murdochs can't be trusted to own 100% of Sky."

"Stopping broadcasting in the U.K. changes nothing," Miliband said. "Fox News in the U.S. is the Murdochs' channel, they are responsible for its broadcasting standards and the appalling racial and sexual harassment that happened on their watch."