Accessibility links
Chemical Fire Burns At Flooded Arkema Plant In Crosby, Texas : The Two-Way Because of floodwaters from Hurricane Harvey, the plant lost power — and the ability to keep containers of flammable organic peroxides from bursting and burning, according to Harris County officials. 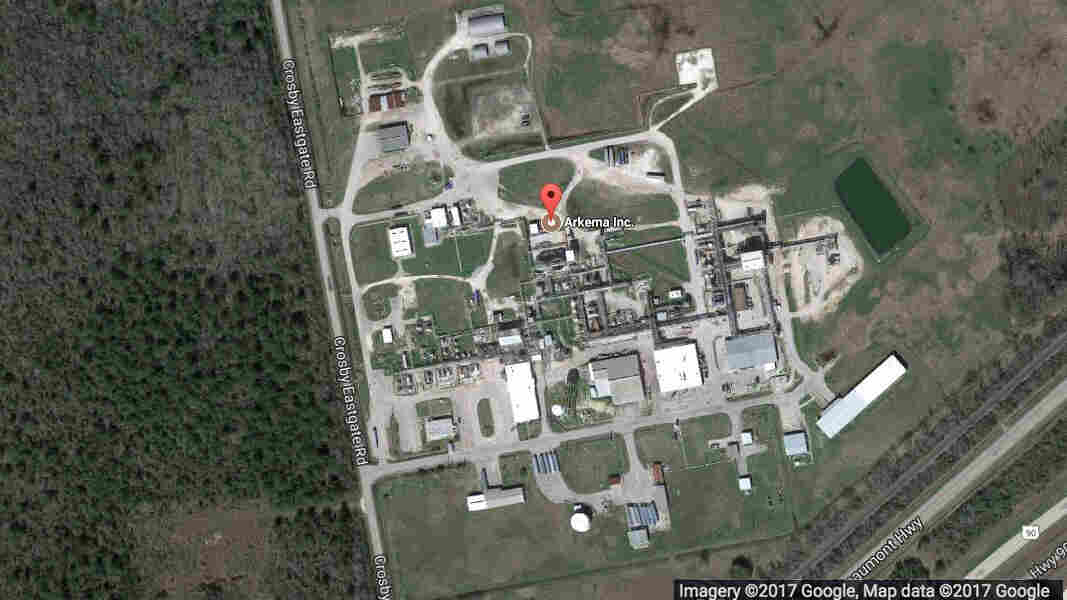 The Arkema plant in Crosby, Texas, is northeast of Houston. The company says it received reports of two explosions at the plant in the early hours of Thursday. Later, the county's emergency and safety officials insisted that nothing at the plant had exploded and that it was containers "popping." Google Maps hide caption 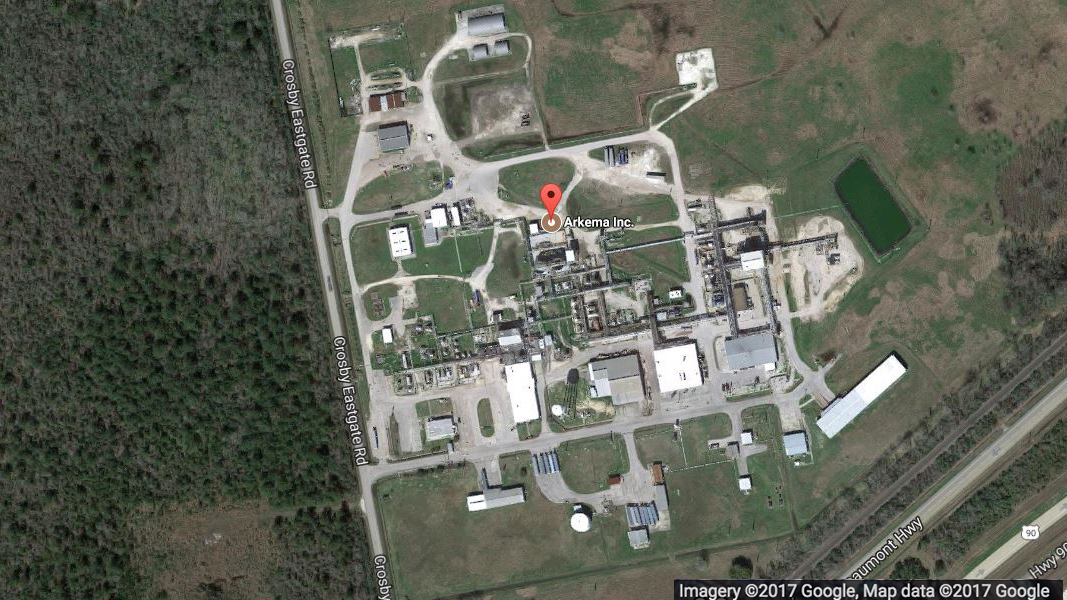 The Arkema plant in Crosby, Texas, is northeast of Houston. The company says it received reports of two explosions at the plant in the early hours of Thursday. Later, the county's emergency and safety officials insisted that nothing at the plant had exploded and that it was containers "popping."

Fire broke out and containers of chemicals burst at the Arkema plant in Crosby, Texas, early Thursday, confirming fears that highly flammable organic peroxides produced at the plant could pose a threat after Hurricane Harvey knocked out safety systems.

The company had pulled its employees from the facility earlier this week out of concern for their safety, and warns that it expects more of the chemical storage containers to rupture as the materials degrade and burn. Residents within a 1.5-mile radius of Arkema were also ordered to flee.

Because of flooding from Harvey, the plant lost power — and the ability to safely store chemicals that, if not kept below a certain temperature, can explode and cause intense fires.

Early Thursday, Arkema said two explosions were reported at the plant northeast of Houston, adding that the Harris County Emergency Operations Center informed the company that black smoke was rising from the plant.

But at a briefing hours later, the county's emergency and safety officials insisted that nothing at the plant had exploded.

"It wasn't an explosion. I want to be very clear. It was not an explosion," Harris County Sheriff Ed Gonzalez said of the incident, which he said was a result of containers "basically popping."

As for the gas and smoke rising from the plant, Gonzalez said, "It is not anything toxic, it's not anything we feel is a danger to the community at all."

The sheriff's department says that 15 of its deputies went to the hospital after getting close to the Arkema plant, and that all of them have since been released. The agency has said the deputies inhaled a "non-toxic irritant."

Chemicals At Flooded Texas Plant In Danger Of Exploding

Gonzalez compared the fumes his deputies encountered to "standing over a barbecue pit or something like that."

"What will happen with these containers that are inside these box vans is, they will pop. And they will heat up, and they will catch on fire. And as such, they will burn with intensity until the fuel is consumed — and then they will die down again."

Royall and Gonzalez refused to call the incident an explosion — a distinction that drew questions from reporters at a dawn briefing in Crosby.

Royall replied that he doesn't want people thinking of "a high-order explosion — something that would be devastating."

"We haven't had massive explosions, because that's not what we expect," he added later. In this case, Royall said, "We've heard these containers pop ... basically, they had container over-pressure."

There are nine containers of this kind at the plant, Arkema executive Rich Rennard told reporters Thursday. One is currently burning.

"We fully expect that the other eight containers will do the same thing," he said. "Water is still in our facility and preventing us from accessing the facility, and we believe at this point that the safest thing to do is to allow the other eight containers, the product in those, to degrade and burn." An Environmental Protection Agency statement Thursday night also said the containers would be allowed to burn.

Rennard seemed to soften the company's initial statement by saying they did not believe the plant has seen a "massive explosion." But he said that could still happen: "These things can burn very quickly and very violently, and it would not be unusual for them to explode."

The Occupational Safety and Health Administration lists organic peroxides under two hazard categories: one for fire, and one for "exploding bomb."

"Explosions of peroxides have caused many fatal accidents," says the National Oceanic and Atmospheric Administration. In terms of toxicity, the agency says they are "often highly toxic and irritating to the skin, eyes, and mucous membranes."

Arkema says it had planned for the worst — but that Harvey's impact surpassed those plans, flooding the facility with 6 feet of water. The plant was shut down last Friday, before Harvey made landfall as a Category 4 hurricane.

"The plant lost power, and its emergency generators. That knocked out refrigeration that keeps the chemicals stable. They're extremely flammable and burn intensely. A chain reaction of explosions is likely, and Arkema warns an environmental release into floodwaters is possible.

"It's not safe to have anyone on site, so the plan is to let the fire burn out. People within a mile-and-half radius in Crosby were evacuated before the fire."

The company says it began warning officials of the safety risk at the plant days ago, after its contingency plans were defeated.

Saying that the chemicals — which are used in producing plastics, resins and other materials — "could now explode and cause a subsequent intense fire," the company added, "The high water and lack of power leave us with no way to prevent it."

Arkema says the plant "is in a rural area with no hospitals, schools, correctional facilities or recreational areas or industrial/commercial areas in the vicinity."

"According to the EPA, nearly 4,000 people live within a 3-mile radius. The chemical facility too is abandoned since the last 11 employees who had remained to try to keep the products from igniting were pulled out."

"Locating chemical and fertilizer plants next to residential areas is not all that uncommon in Texas. In 2013, the West Fertilizer Co. in the small town of West, just south of Dallas, exploded, killing 12 first responders and three others and injuring 160. Property damage to the surrounding neighborhoods was extensive. The Bureau of Alcohol, Tobacco, Firearms and Explosives eventually ruled that fire was deliberately set. The water poured onto the blaze by the volunteer firemen very likely facilitated the explosion, which blew up with the force of between 7.5 and 10 tons of TNT."