Accessibility links
David Clarke Steps Down As Milwaukee Sheriff To 'Pursue Other Opportunities' : The Two-Way The conservative gun rights advocate and prominent Trump supporter resigned Thursday in a letter that consisted of a single sentence. The move was greeted with some cheers — and lots of speculation.

0:31
David Clarke Steps Down As Milwaukee Sheriff To 'Pursue Other Opportunities' 0:31

David Clarke Steps Down As Milwaukee Sheriff To 'Pursue Other Opportunities' 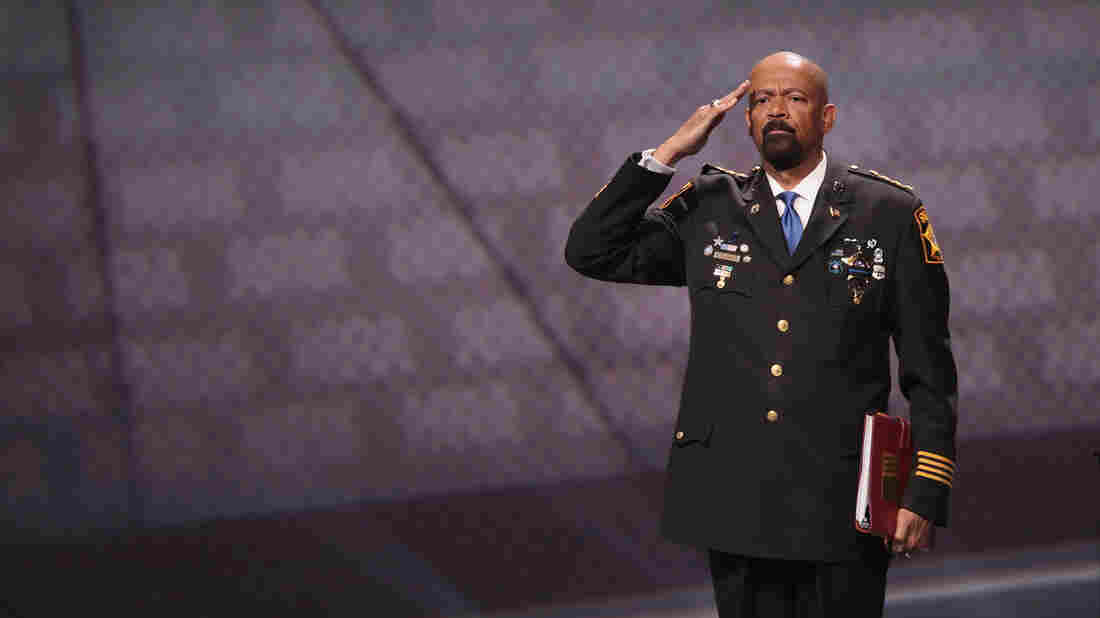 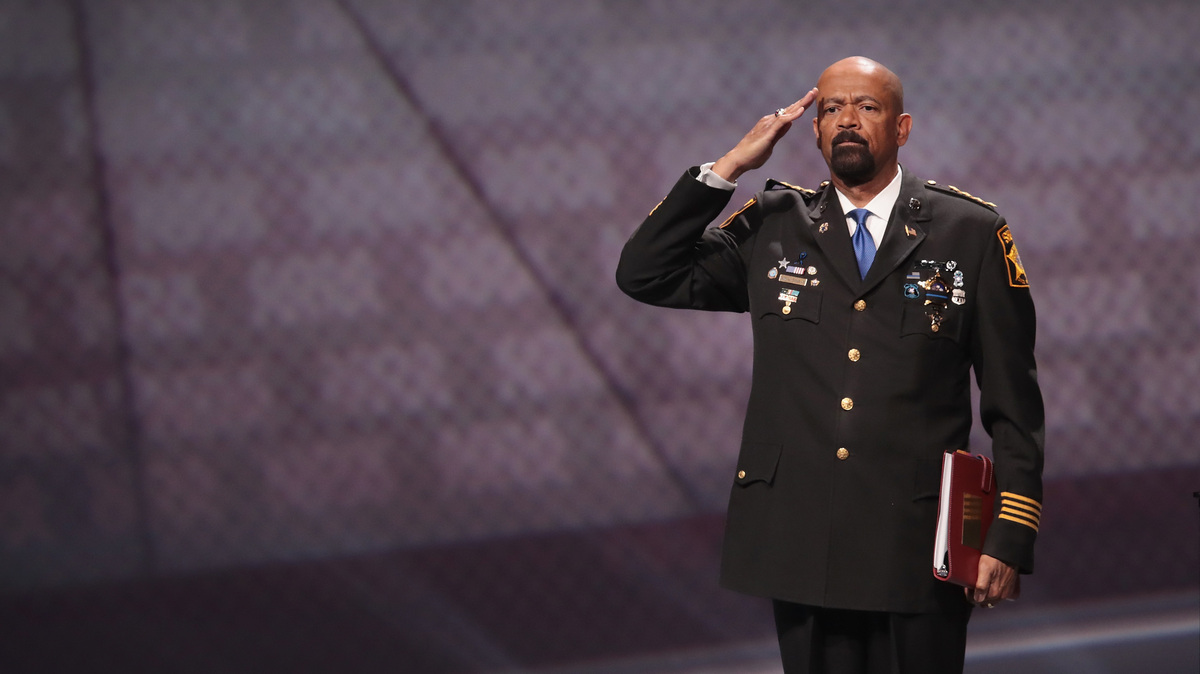 David Clarke Jr., seen here at a National Rifle Association conference in Atlanta earlier this year, resigned his position as sheriff of Milwaukee County on Thursday.

David Clarke Jr., a prominent supporter of President Trump's, drew an end to his controversial tenure as Milwaukee County sheriff Thursday, submitting his resignation to the county clerk in a letter that consisted of a single sentence.

"Pursuant to Wis. Stat. §17.01," the letter reads, according to Clerk George L. Christenson, "this communication is submitted at the notice of my resignation as Sheriff of Milwaukee County commencing August 31, 2017, at 11:59 p.m."

The cited statute specifies that the clerk shall immediately pass along to the governor notice of Clarke's resignation, which was rendered with more than a year left in his fourth term in office. Clarke, who was elected as a Democrat, had served as Milwaukee County sheriff for nearly 15 years, first by appointment and then election in subsequent terms.

Clarke elaborated on his brief note in a statement released later that day.

"After almost 40 years serving the great people of Milwaukee County, I have chosen to retire to pursue other opportunities," Clarke said. "I will have news about my next steps in the very near future" — in fact, he tweeted Friday that the announcement will come next week.

After nearly 40 years serving my community I'm retiring. What a ride! I will announce my future plans next week after the Labor Day holiday. pic.twitter.com/pYbv7txCEZ

The African-American lawman known for his cowboy hats has been a strong supporter of gun rights, making regular appearances at National Rifle Association events and even saying his constituents were better off arming themselves than waiting for police.

"I want to talk to you about something personal: your safety. It's no longer a spectator sport. I need you in the game. But are you ready?" Clarke said in a 2013 public service announcement for the radio. "With officers laid off and furloughed, simply calling 911 and waiting is no longer your best option. You can beg for mercy from a violent criminal, you can hide under the bed, or you can fight back."

Later, he would go on to become one of Trump's most recognizable voices, nabbing a speaking slot at the 2016 Republican National Convention and talking often to news networks about the virtues of the president's policies.

He was also no stranger to controversy.

Earlier this year, jailers under his watch drew the attentions of prosecutors, who launched an investigation after an inmate died of dehydration. A jury recommended prosecutors file charges against more than half a dozen of Clarke's employees for allegedly turning off water to the dead man's cell.

Clarke, who was not charged himself, accepted the move as "part of the process" and denied any wrongdoing, noting he "cannot control someone who comes in in bad medical health that is a heroin user or has all of these other ailments and they happen to die inside that facility downtown."

Later this year, CNN reported that Clarke plagiarized parts of his 2013 master's thesis, failing "to properly attribute his sources at least 47 times."

Incidents such as these — together with statements from the sheriff such as one declaring that blacks are "uneducated, they're lazy, and they're morally bankrupt" — have done little to curry favor with local politicians and national advocates.

"This is truly a good Thursday," Wisconsin state Sen. Lena Taylor said in a statement. "I want to thank Sheriff Clarke for his decision to step down. After years of abuse at his hands, the people of Milwaukee can sleep soundly tonight."

Still, if anything, this criticism has only burnished Clarke's reputation in the eyes of many conservatives — most notably, President Trump, who briefly stepped away from tweeting about the federal response to Hurricane Harvey to promote Clarke's new book on Twitter.

A great book by a great guy, highly recommended! https://t.co/3jbDDN8YmJ

It's this support that has helped gin up speculation about Clarke's "other opportunities." Citing unnamed sources, Politico reports that Clarke is expected to take a position in the Trump administration.

As Wisconsin Public Radio notes, Clarke had already said in May he would step down as sheriff to take a job at the Department of Homeland Security — though weeks later, it became clear he would not be assuming that role after all.