Accessibility links
Here Are The Facts About North Korea's Nuclear Test : The Two-Way North Korea has claimed to have tested a hydrogen bomb, which is far more powerful than an atomic bomb. Experts think they may have pulled it off. 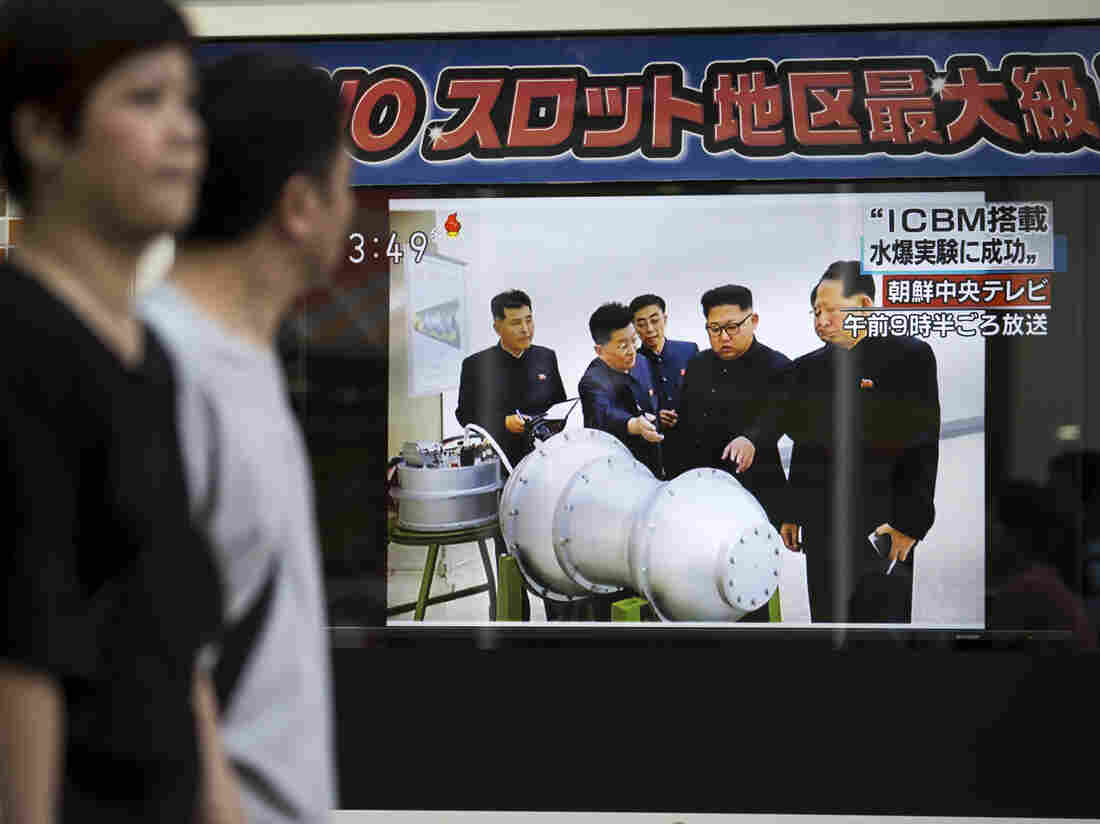 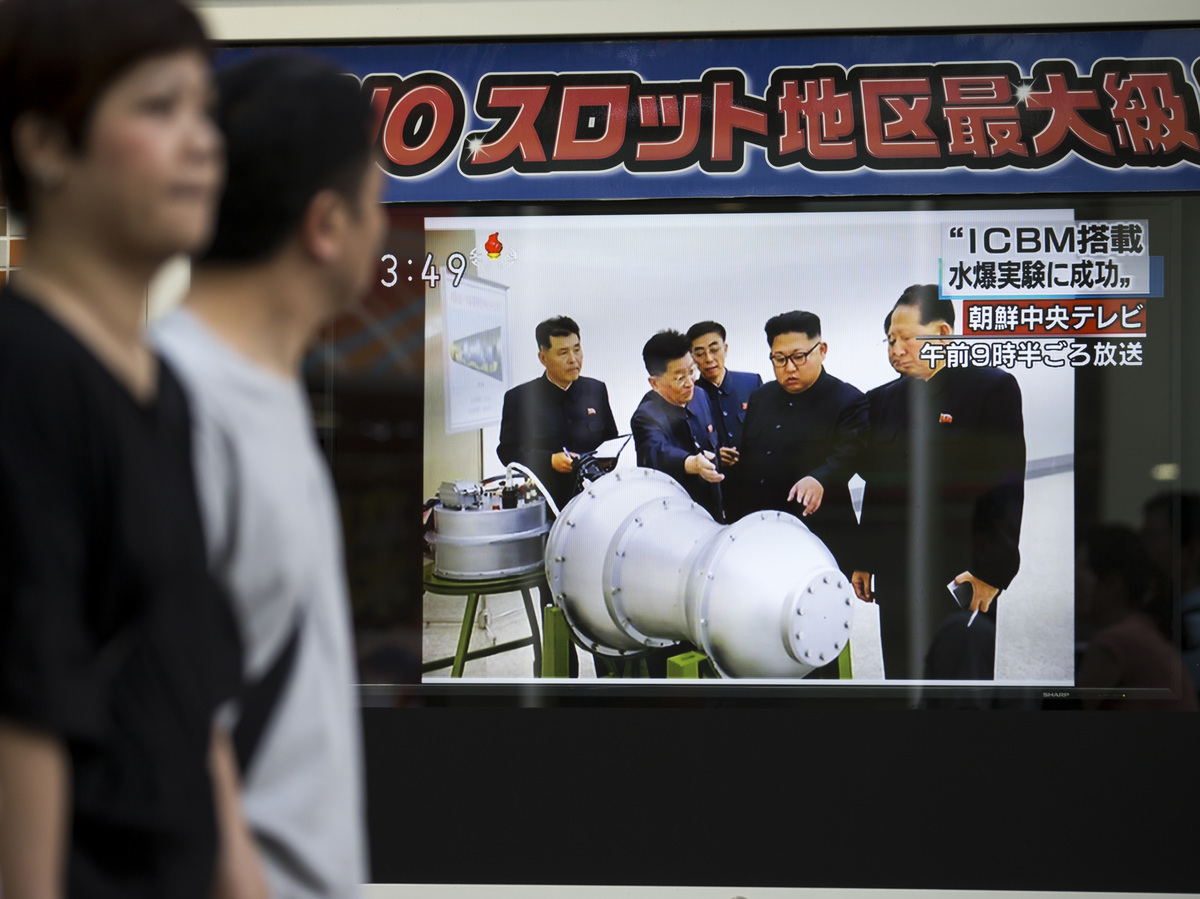 Pedestrians in Tokyo walk past a monitor showing an image of North Korean leader Kim Jong Un in a news program reporting on North Korea's sixth nuclear test on Sunday.

The blast was picked up by seismic stations all over the world, and it was big.

The Comprehensive Test Ban Treaty Organization, which monitors the globe for nuclear tests, said that its monitoring system had gone off-scale. The U.S. Geological Survey recorded a 6.3-magnitude earthquake, which was human-made. That's far larger than the seismic signature from the North's last test, conducted roughly a year ago. Here's what you need to know.

This was probably not an "ordinary" nuclear test

North Korea's previous nuclear tests have been in the tens of kilotons range. That corresponds roughly to a weapon the size of the ones used on Hiroshima and Nagasaki at the end of World War II. It's believed that the North's earlier tests were of nuclear weapons that use uranium or plutonium (or both) for their explosive yield.

This time, the North claims to have mastered a far more powerful hydrogen weapon. Some early estimates are putting this test in the hundreds of kiloton range.

@ArmsControlWonk What this means in practice is that the range will be: pic.twitter.com/tPX4Q3saDs

Much analysis remains to be done, he notes.

And if it's a hydrogen bomb, as the North claims, that's a big deal

"Normal" nuclear weapons depend on the splitting apart, or fission, of atoms for their explosive power. But for thermonuclear weapons, that's just the start.

A comparatively small fission bomb made of uranium or plutonium is used to trigger a far larger blast through nuclear fusion, the sticking together of light atoms. Those atoms are hydrogen isotopes, which is where the hydrogen bomb derives its name.

Modern nuclear weapons of the sort possessed by the U.S. and Russia are almost all thermonuclear in nature. It allows the weapons to pack a huge punch while fitting in a warhead small enough to be delivered by a missile. These weapons are also tens or hundreds of times more powerful than the ones used at the end of the Second World War.

For his part, Acton says he says no reason to doubt the North Korean claim. "I don't have any serious doubt in my mind that this is what the North Koreans say it is, and that's a thermonuclear weapon."

A day before the test, North Korea released photos of Kim Jong Un posing with a hydrogen bomb, or at least a model of a hydrogen bomb. The photo shows an oblong device that looks a little like a dumbbell. One of the spherical shapes depicted could be the fission "primary" of the weapon; the other the fusion "secondary".

Whether or not the device in the picture is real, the photos are meant to clearly show that North Korea understands the concepts behind modern thermonuclear weapons. A diagram behind Kim also shows how the weapon could fit into a missile warhead.

Military options are probably not the greatest idea

In a series of tweets following the test, President Trump opined that the North Koreans "only understand one thing!"

However, many analysts believe that even a limited military strike on North Korea could be potentially catastrophic. "No military analyst believes that we would be able to destroy all of North Korea's nuclear weapons or capabilities," says Jon Wolfsthal, a former adviser to Obama's National Security Council who now works with GlobalZero, an arms control nonprofit. "If you're not assured you've got them all, you're triggering a nuclear response."

And the North has thousands of conventional artillery pieces within range of the South Korean capital Seoul. That would mean a devastating nonnuclear response would also be possible.

Nobody knows. Much will depend on how the U.S. and allies in the region respond to the test. Additionally, China may be more willing to apply sanctions and other pressure on the North Korean regime.

Perhaps the greatest unknown is what Kim Jong Un will do with his nuclear arsenal. Traditionally, nations have used these weapons as a way to deter attacks by others, and so far, the young leader's actions seem to suggest he wants to preserve his power, according to Wolfsthal.

But, he adds, "The problem with deterrence is that it works up until the point it doesn't."