Accessibility links
Record-Breaking NASA Astronaut Peggy Whitson Returns To Earth : The Two-Way Peggy Whitson smashed multiple records after spending a total of 665 days in orbit over the course of her career.

'American Space Ninja' Back On Earth After Record-Breaking Flight

'American Space Ninja' Back On Earth After Record-Breaking Flight 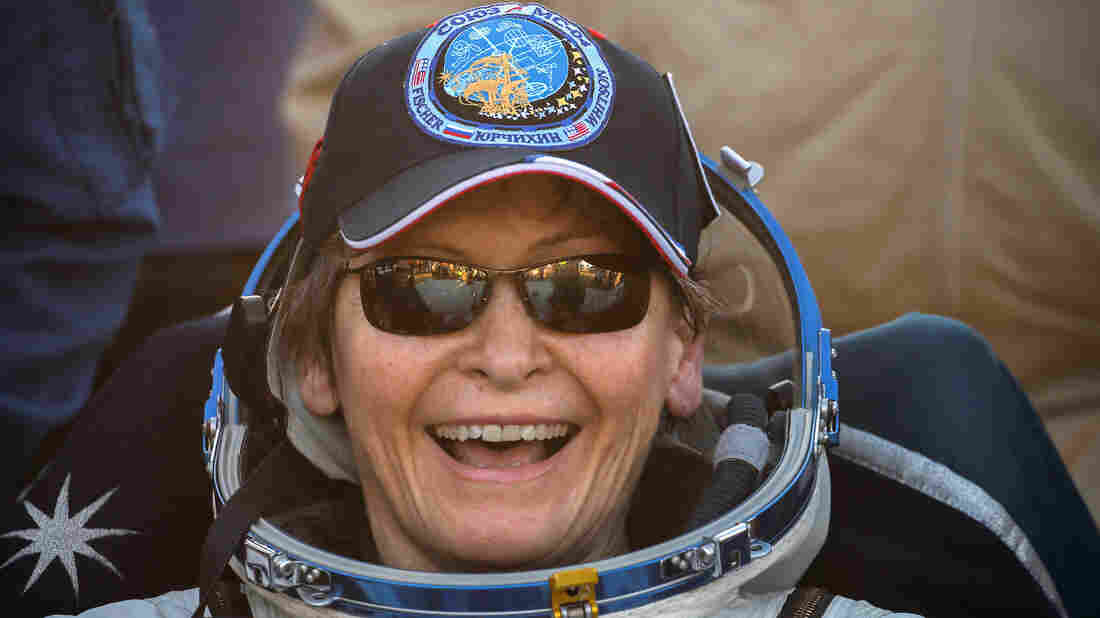 Astronaut Peggy Whitson smiles after landing in Kazakhstan, wrapping up a record 665 days in space for an American. Sergei Ilnitsky/AP hide caption 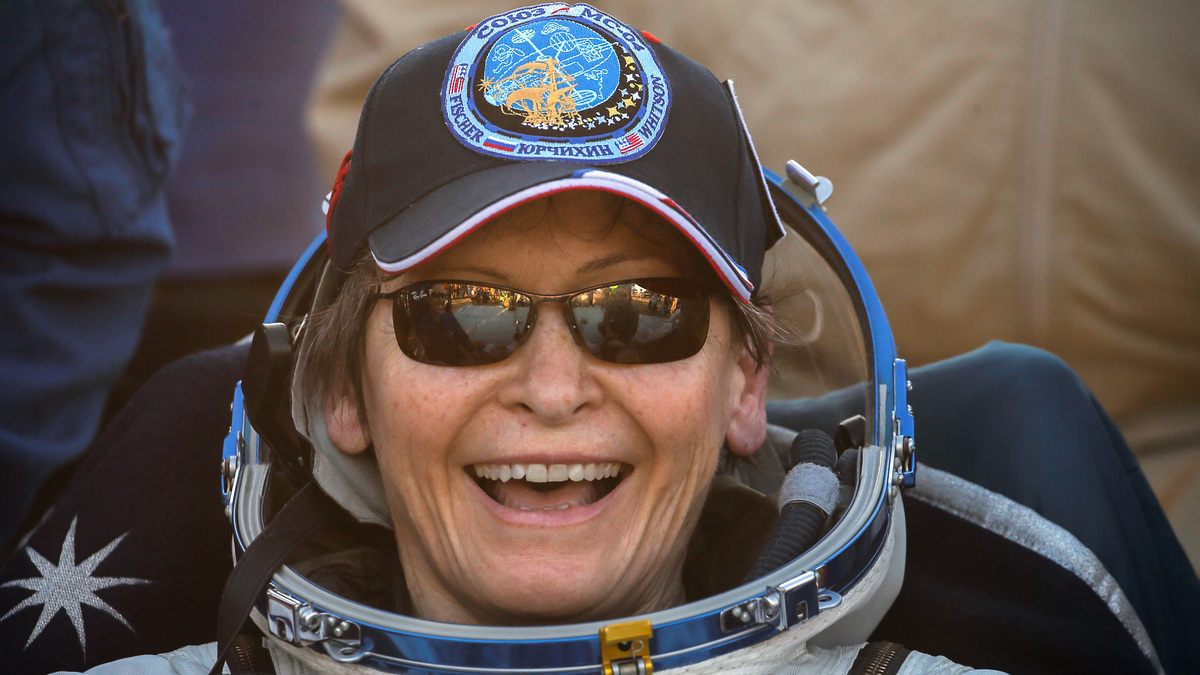 Astronaut Peggy Whitson smiles after landing in Kazakhstan, wrapping up a record 665 days in space for an American.

Imagine more than 600 days in space; that's 21 months cruising the cosmos, or close to two years without flush toilets or pizza.

On Saturday, Astronaut Peggy Whitson touched down in Kazakhstan at 9:21 p.m. EDT alongside a fellow American and a Russian in their Soyuz capsule, wrapping up a record-breaking mission.

Whitson spent 288 days — more than nine months — on this latest mission aboard the International Space Station. But over the course of her career, she has been away from earth for three long-duration missions, an accumulation of 665 days — longer than any American ever and more time than any woman worldwide.

Whitson, who is also a biochemist, broke the record for an American astronaut's time in space in April on her 534th day in orbit, as The Two-Way reported. President Trump called her to offer congratulations and they discussed the timetable for sending humans to Mars.

Whitson has smashed other records as well: she is the world's oldest female astronaut (57 years old), the most experienced female spacewalker (10 space walks) and she is the first woman to have commanded the space station twice, reports The Associated Press.

After the 9:21pm ET landing, @AstroPeggy has a total of 665 days in space, the U.S. record and places 8th on all-time space endurance list pic.twitter.com/grVIRo3SmX

Commander Fyodor Yurchikhin of Russia returned with Whitson Saturday and has actually spent a bit more time away: 673 days, reports AP. Also aboard this latest mission was American Jack Fischer, who spent 136 days in space.

During their time aboard the ISS, NASA says Whitson and Fischer "contributed to hundreds of experiments in biology, biotechnology, physical science and Earth science." Their work included research into antibodies "that could increase the effectiveness of chemotherapy drugs for cancer treatment," as well as looking into the changes that astronauts eyes undergo in an environment with so little gravity.

Whitson was supposed return home in June, but when an extra seat opened up on the Soyuz, "she jumped at the chance to stay in orbit an extra three months," reports AP.

The day before their departure, the space station's new commander Randy Bresnik praised the astronauts' work, "We are in your debt for the supreme dedication that you guys have to the human mission of exploration."

The Iowa native began working for NASA in 1989. She started astronaut training in 1996 and first docked with the ISS in 2002. By 2008, she was serving as the station commander — the first woman to do so, according to her NASA bio.

638 days in space and the view is still amazing! Soaking up some sunset time in the cupola… pic.twitter.com/AiReQzkjJZ

Now that she is back on solid ground, Whitson will be enjoying the earthly advantages she has been missing most. "Flush toilets. Trust me, you don't want to know the details," she told The Associated Press. "Pizza has been on my mind for a month or two."

She is due home in Houston by Sunday night, reports AP. And while she says her home was spared from the ravages of Hurricane Harvey, her coworkers, who had to sleep on cots in backup Mission Control rooms, were impacted. "Any trepidations I might have about returning in the aftermath of a hurricane are entirely eclipsed by all those folks keeping our mission going."

And while this may well have been Whitson's last spaceflight, she says she sees herself continuing to work on the programs.

"My desire to contribute to the spaceflight team as we move forward in our exploration of space has only increased over the years," she said.

As for what she will be missing about space: "I know that I will hugely miss the freedom of floating and moving with the lightest of touch," she tells AP.

"I will miss seeing the enchantingly peaceful limb of our Earth from this vantage point. Until the end of my days, my eyes will search the horizon to see that curve."