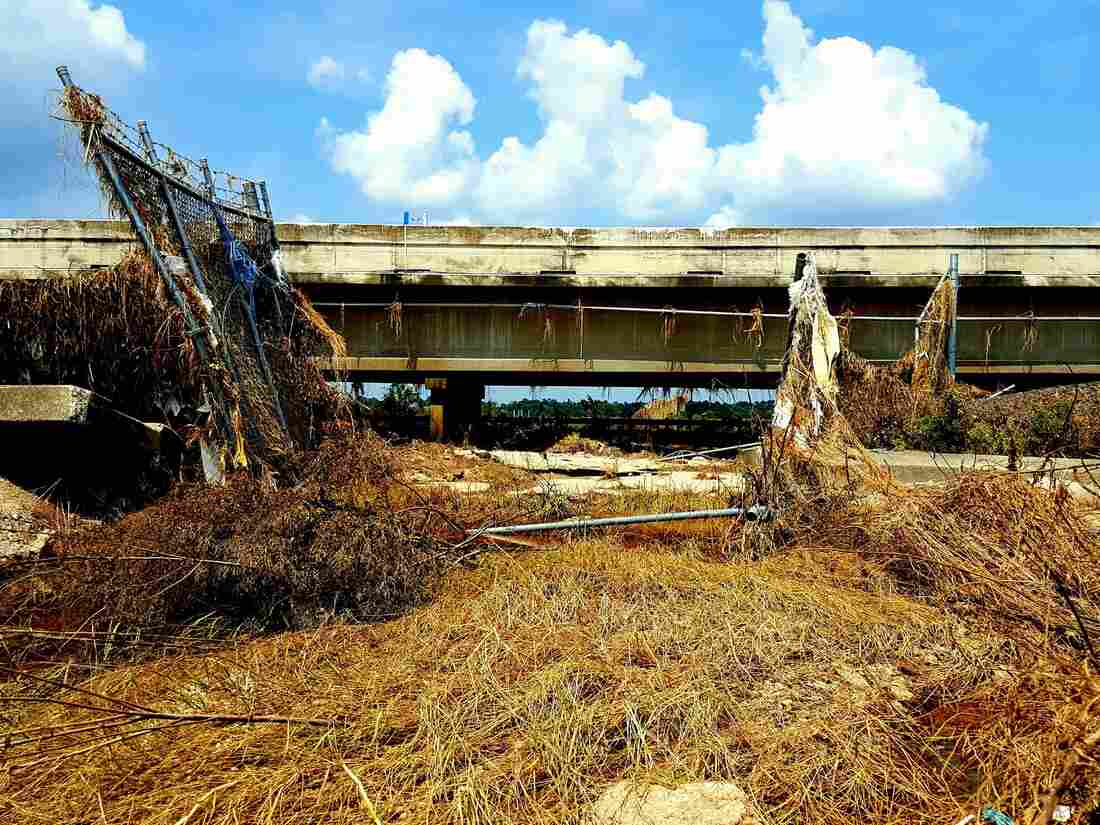 Floodwater from last week's storm ripped apart fences and flooded I-10. The San Jacinto Waste Pits Superfund site is just on the other side of the road. Rebecca Hersher/NPR hide caption 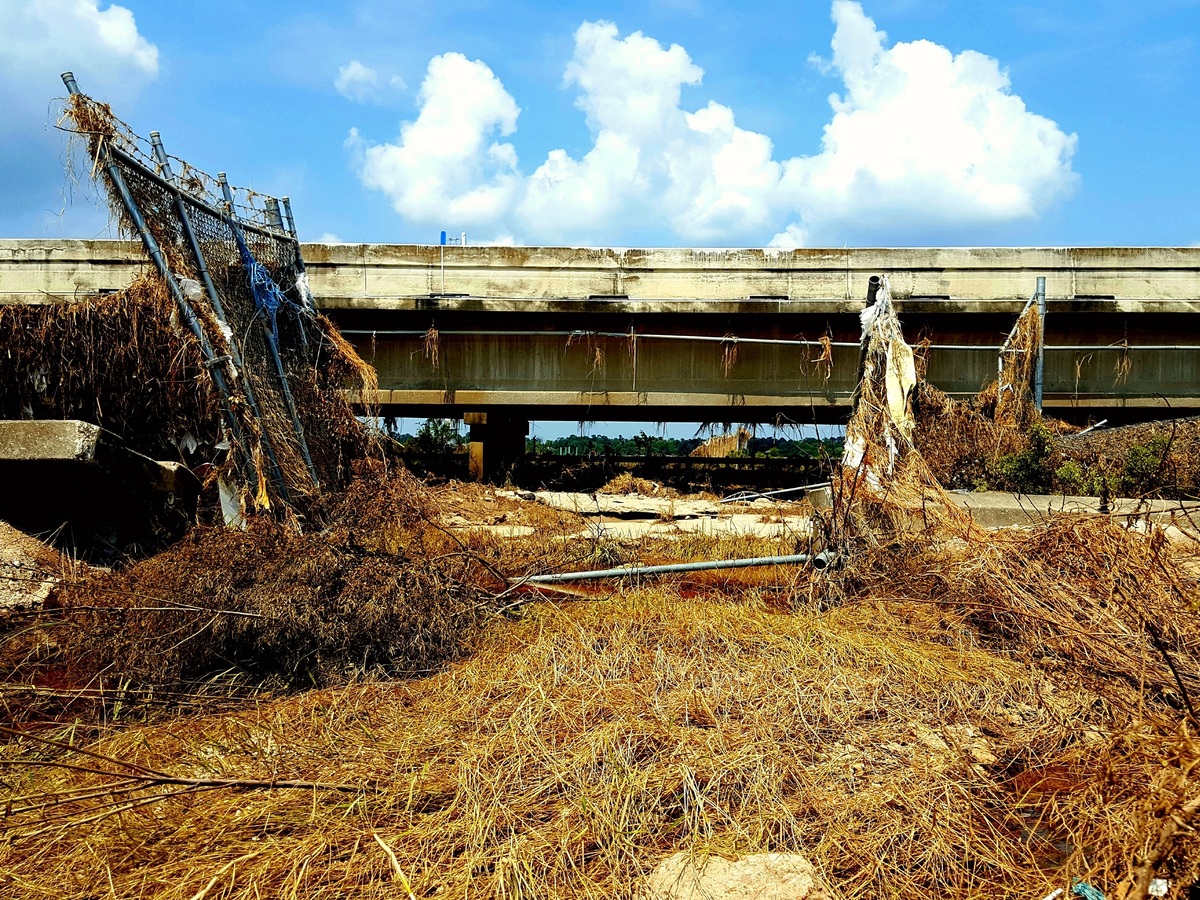 Floodwater from last week's storm ripped apart fences and flooded I-10. The San Jacinto Waste Pits Superfund site is just on the other side of the road.

Officials are still trying to confirm whether Texas floodwaters have spread contamination from decades-old toxic waste sites, as water recedes and residents return to homes that, in some cases, were flooded with water that passed over known contaminated areas.

The Environmental Protection Agency says 13 Superfund sites were flooded and potentially damaged by Hurricane Harvey. In addition to two sites determined to be undamaged over the weekend, the EPA said Monday that personnel had inspected the Highland Acid Pit, U.S. Oil Recovery and the San Jacinto Waste Pits, but did not announce results of those inspections.

EPA spokesperson Liz Bowman wrote in a statement on Monday, "EPA teams are in place to investigate possible damage to these sites as soon flood waters recede, and personnel are able to safely access the sites." NPR found little or no water left around three of the remaining sites on Sunday.

In a separate statement, the EPA also said it had done initial aerial assessments of 41 Superfund sites. 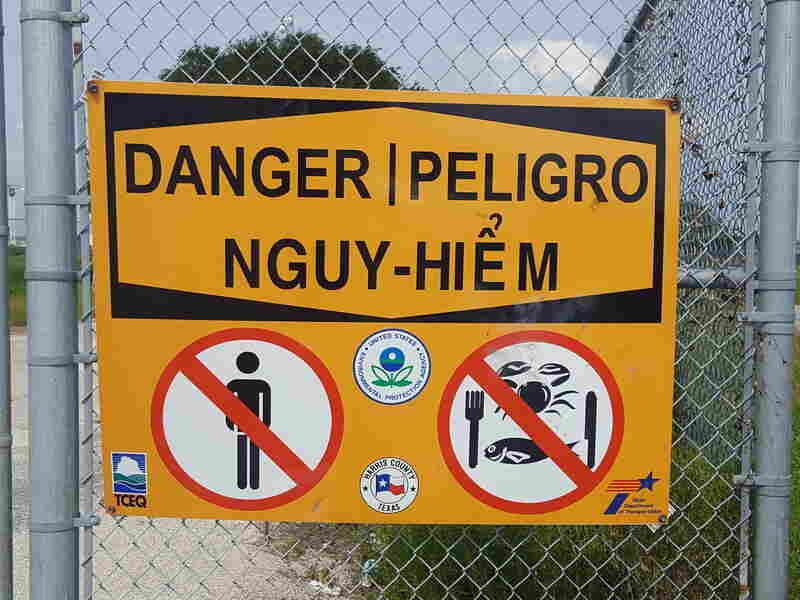 A sign along the San Jacinto River warns against eating fish or shellfish from the river. A nearby site that has been a source of toxins was flooded by Hurricane Harvey. Rebecca Hersher/NPR hide caption 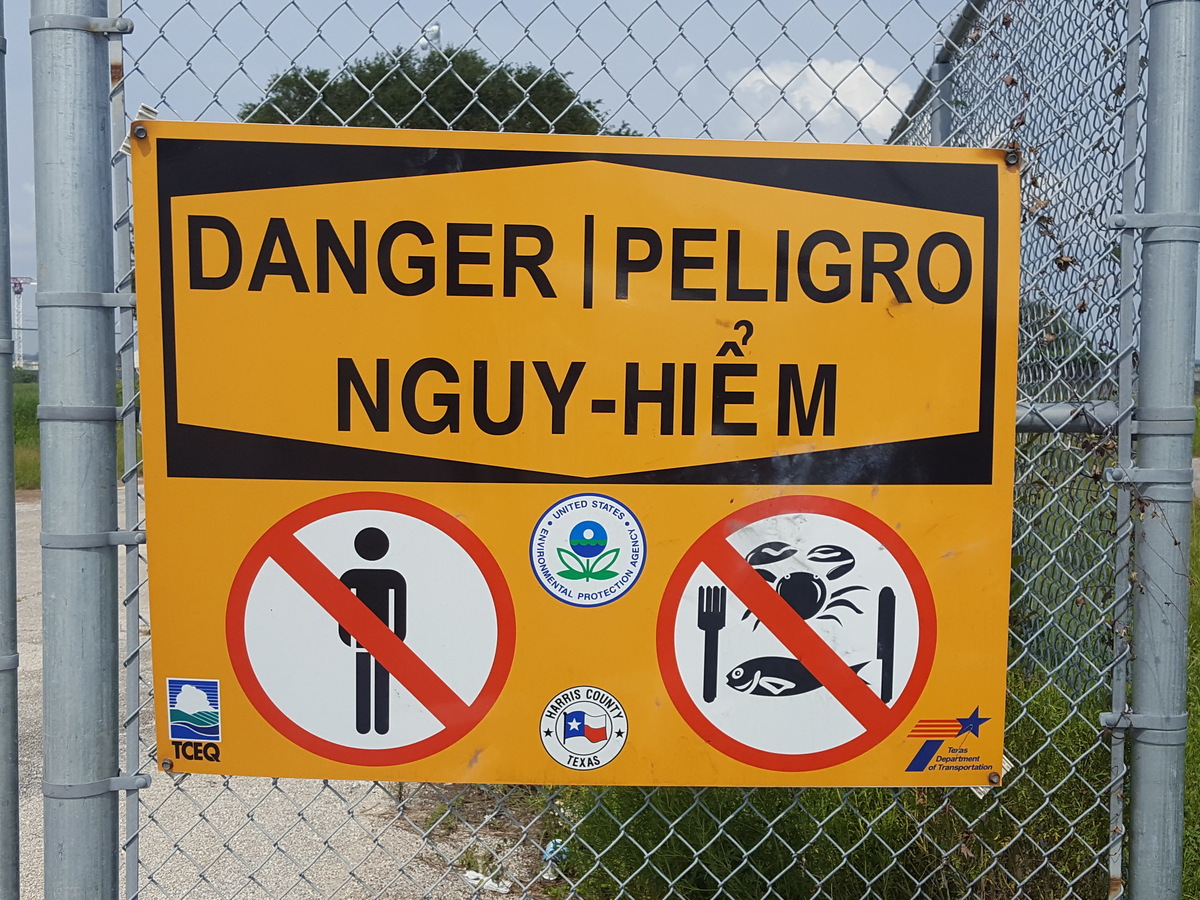 A sign along the San Jacinto River warns against eating fish or shellfish from the river. A nearby site that has been a source of toxins was flooded by Hurricane Harvey.

'That site started sinking into the river'

The San Jacinto Waste Pits are located in the middle of the San Jacinto River about 20 minutes from downtown Houston, adjacent to Interstate 10. It is made up of two main pits, was used as a dumping area for toxic waste from a paper mill in the 1960s, and is heavily contaminated with chemicals called dioxins, according to the EPA.

"This was just an open pit on the edge of the San Jacinto River," says Scott Jones of the Galveston Bay Foundation, a nonprofit group that works with state and federal agencies on waterway cleanup efforts in the region. He says a bad location for waste disposal was made worse by groundwater pumping over the years. "That site started sinking into the river, so probably since the mid-'70s about half that pit has been permanently underwater. So all those years that dioxin can get out into the water."

The site was added to the National Priorities List of Superfund sites in 2008, after the EPA found the area around the pits was contaminated with both dioxins and furans. The Texas Parks and Wildlife Department warns people should not eat fish and crabs from the area because the animals may be contaminated.

Jones, who used to work for the Texas Commission on Environmental Quality, says he's been generally happy with the EPA's handling of the site, but wishes the entire process moved more quickly, given the dangers to wildlife and humans who live in the area.

"With all of our government agencies, whether it's federal or state, we don't put enough money into [them]," he says. The Texas Commission on Environmental Quality did not return requests for comment.

In 2011, the pits full of toxic soil and sand were temporarily capped with a liner held in place with large rocks, and last year the EPA announced it was taking public comments on a proposed plan to remove 152,000 cubic yards of contaminated material from the site. The agency was still reviewing those comments when last week's storm hit. 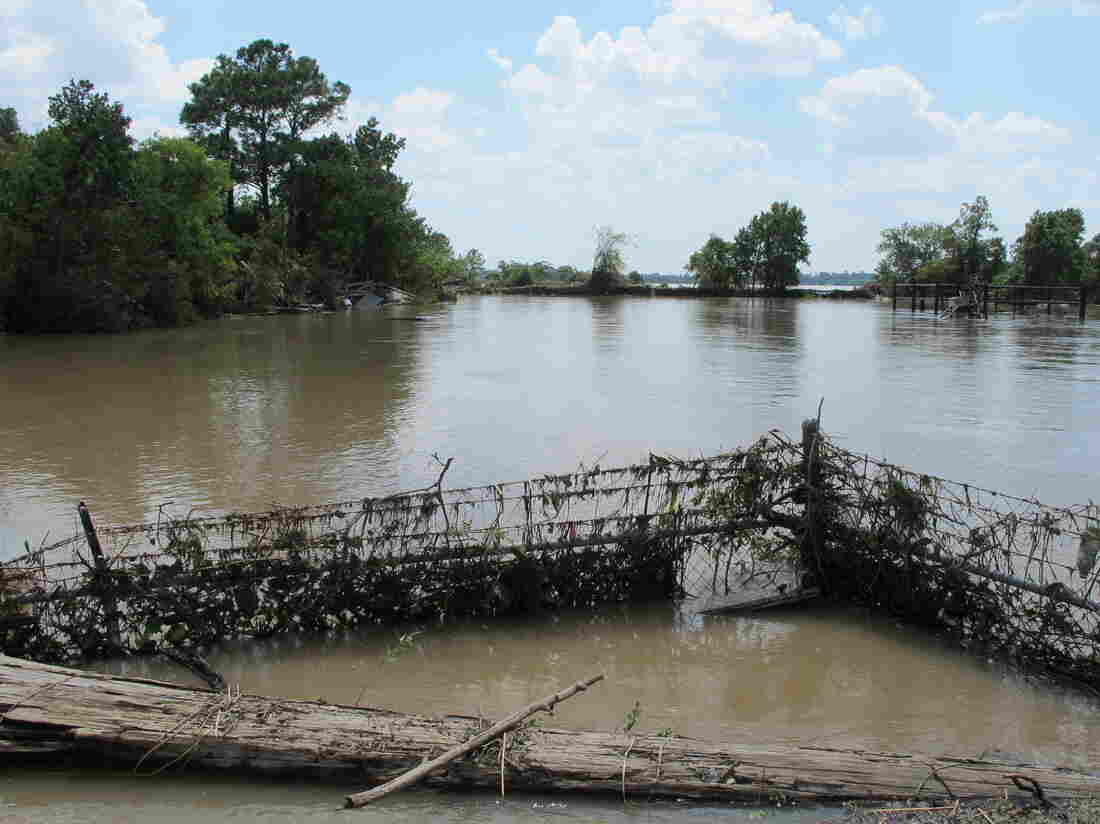 The Highlands Acid Pit Superfund site remained flooded on August 31. The water has since receded, and some residents are concerned that toxins from the site could have spread into the nearby neighborhood. Jason Dearen/AP hide caption 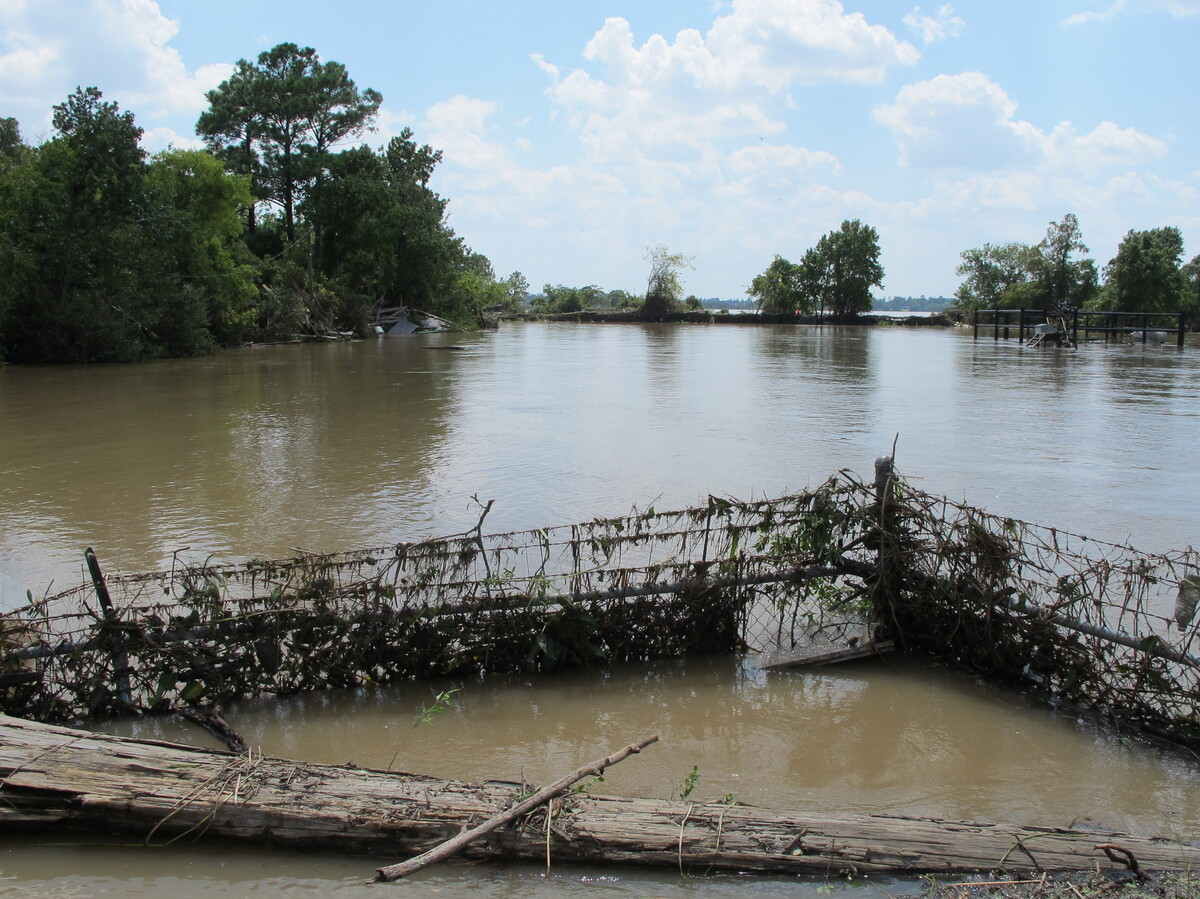 The Highlands Acid Pit Superfund site remained flooded on August 31. The water has since receded, and some residents are concerned that toxins from the site could have spread into the nearby neighborhood.

Residents who live near multiple Superfund sites in the Houston area say they haven't heard from EPA or TCEQ officials, and some are concerned that the mud left behind by flooding could be dangerous.

Barbara and Ellen Luke grew up a few blocks from the Highland Acid Pit, which was contaminated with industrial sludge thought to contain sulfuric acid in the 1950s.

"We always walked down there and messed around," says Barbara. Her 73-year-old mother still lives in the family home, which had 2 feet of water in it at the height of the floods last week. On Sunday, the sisters set fire in the front yard to whatever waterlogged belongings would burn. Both women said they are skeptical of any official who tells them the area is safe.

"I don't trust it," says Barbara. "I mean that is probably something that will forever affect the environment. I don't see how you can get rid of that."

Up the street, Adolfo Peralta says the water was 12 feet high in his yard. His home, he says, is destroyed. He'd like to repair it, but his wife would like them to move, in part because she's concerned about contamination. He's hoping someone from the government will be able to tell him definitively that the water and soil on his property are safe in the coming weeks.

Another neighbor, Dwight Chandler, is repairing a home that's been in his family since 1942. "I grew up in that acid pit," he says. "Played in it my whole life. That's my cousin. He was raised here, played in it. Ain't affected us, you know?" His cousin nods in agreement from across the room.

It's always difficult to tie any particular health outcome to contamination, or lack of it. Studies have found significantly higher rates of cancer and respiratory illness among those living along the Houston Ship Channel and San Jacinto River.

Chandler says he welcomes testing for toxins in the neighborhood. It can't hurt. But he's not waiting for it; he's rebuilding now.