Accessibility links
Calling Nurse A 'Hero,' Utah Hospital Bars Police From Patient-Care Areas : The Two-Way "Law enforcement who come to the hospital for any reason involving patients will be required to check in to the front desk of the hospital," the chief nursing officer says. 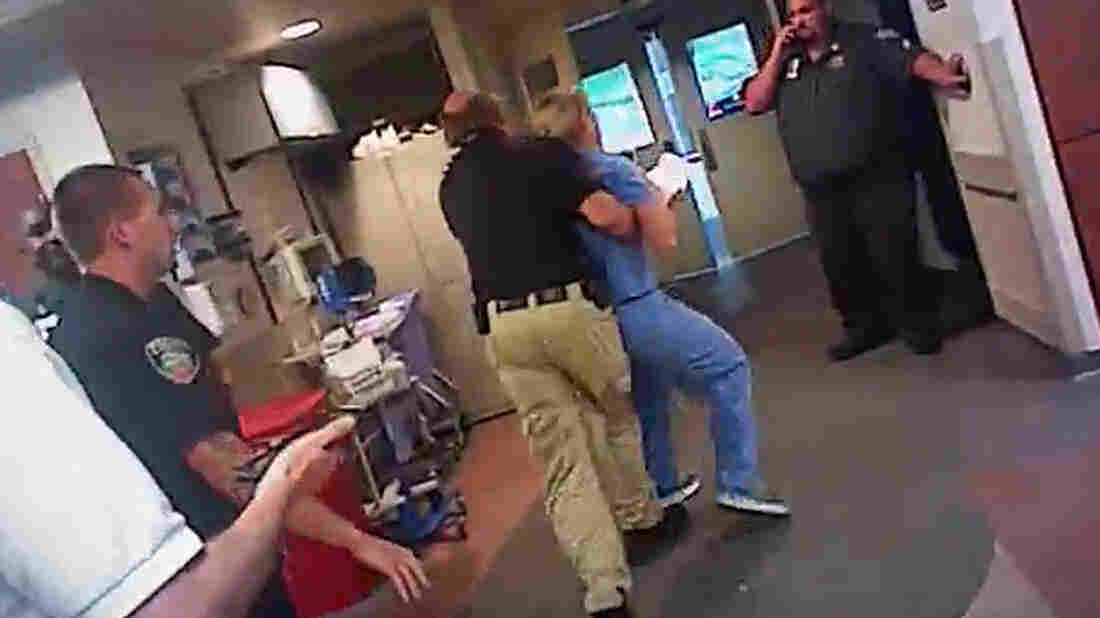 A frame grab from video taken from a police body camera shows the July 26 arrest of nurse Alex Wubbels at the University of Utah Hospital in Salt Lake City. The image was provided by Wubbels' attorney, Karra Porter. Salt Lake City Police Department/Courtesy of Karra Porter via AP hide caption 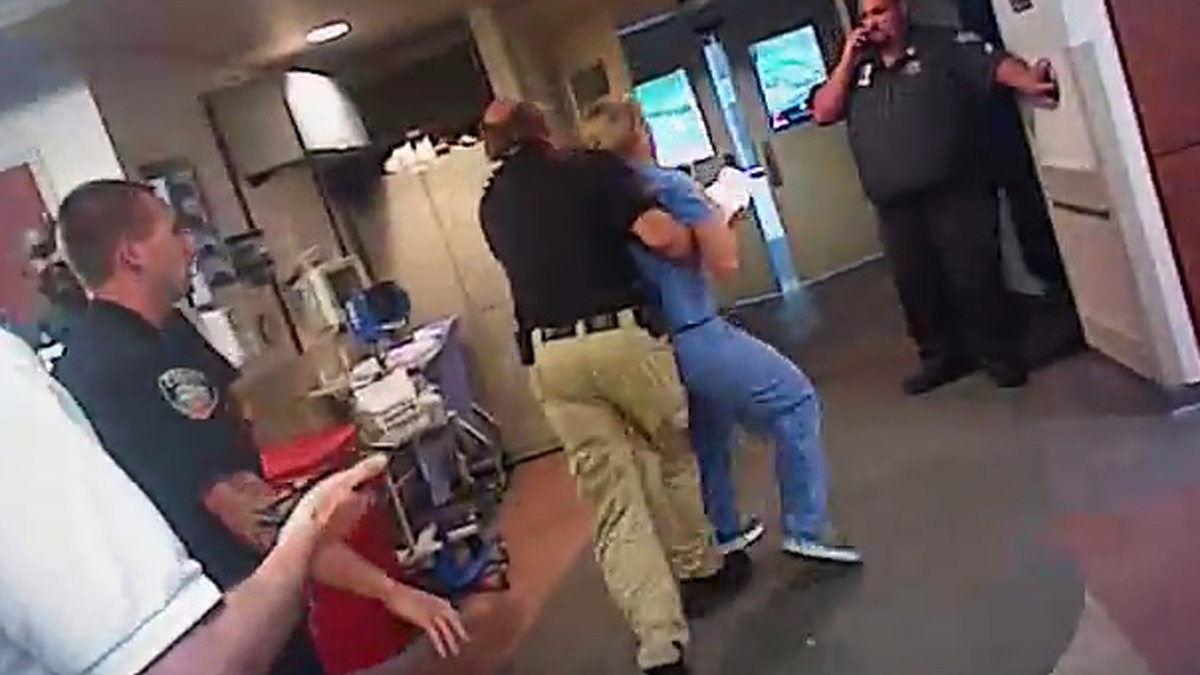 A frame grab from video taken from a police body camera shows the July 26 arrest of nurse Alex Wubbels at the University of Utah Hospital in Salt Lake City. The image was provided by Wubbels' attorney, Karra Porter.

The Salt Lake City hospital where a police officer roughly arrested a nurse who was protecting her patient's rights in July will no longer allow law enforcement agents inside its patient care areas. They'll now have to check in rather than enter through the emergency room.

"Law enforcement who come to the hospital for any reason involving patients will be required to check in to the front desk of the hospital," said chief nursing officer Margaret Pearce of the University of Utah Hospital. "There, a hospital house supervisor will meet the officers to work through each request."

Hospital officials say they created the policy one day after the July incident in which nurse Alex Wubbels refused to allow a police investigator identified as Jeff Payne to get a blood sample from a patient who was injured in a deadly collision with another driver. Wubbels was following the hospital's policy (and a recent Supreme Court decision) that requires either a warrant, the patient's consent or the patient being under arrest for such a sample to be obtained legally.

Last year, the Supreme Court ruled that the Fourth Amendment bars blood tests from being obtained without a warrant in drunken-driving cases.

"Our hospital continues to offer our full support to Alex," said Gordon Crabtree, the hospital system's CEO. "I think many of you know she is an Olympian, and to us she's truly an Olympic-size hero. We extend our appreciation for her dedication and service."

While Wubbels' superiors said she had shown professional integrity and grace under fire, the officer's bosses and Salt Lake City's mayor have issued apologies for his behavior. He is on administrative leave while the case is being investigated.

The encounter between Wubbels and Payne took place on July 26 — but it made headlines last Thursday, when body camera footage of the dispute was released. The video shows Wubbels referring to her hospital's privacy policy and speaking with a supervisor on her cellphone as she denies the officer's request for a blood sample from a patient.

Having failed to persuade Wubbels to allow him to obtain blood from the patient, the officer begins grabbing at the nurse and then forcefully pulls her outside the hospital as she yells for help. He then handcuffs her and puts her in a police car parked at the hospital.

"Our team was advocating for the immediate release of Alex and was ultimately successful in getting her released from the handcuffs and the car," Crabtree said on Monday. "Alex was never charged and will not have a record."

Pearce said she was "appalled" at the encounter. She added:

"We are a Level 1 Trauma Center with the only dedicated burn unit in the Mountain West region and we have some of the sickest patients anywhere. Because of this, we work with law enforcement on a regular basis for a variety of reasons and will continue to do so. However, I consider the way in which Alex was treated to be totally unacceptable. No individual in a role of patient care should ever be treated in this fashion."

The new policy "was written the day after this incident" and was implemented within weeks, Pearce said. Here's how she described the goals for the change:

As we've reported, Wubbels is a former two-time Olympic skier.

The Salt Lake City Police Department says it suspended Payne from its "blood draw program," in which it trains officers to take blood samples. It adds that it updated its policies for officers who remain in the group.

Payne has also been fired from his part-time paramedic job with a private ambulance service.

According to the Salt Lake City Tribune, the patient in question was truck driver William Gray — who also works as a reserve police officer in Rigby, Idaho, and whose tractor-trailer collided with a vehicle that was being pursued by police.

Citing Payne's police report, the Tribune describes the highway crash that led to the hospital confrontation:

"At about 2 p.m. on July 26, Gray was driving a semi north on State Road 89/91 near Sardine Canyon when a man fleeing from the Utah Highway Patrol crashed a pickup truck into him head-on, according to Logan police, who investigated the collision.

"The crash caused an explosion and fire, Logan police have said. Gray was on fire when he exited the semi. The driver of the pickup truck, Marcos Torres, 26, died at the scene."