Accessibility links
National Cathedral Is Removing Stained-Glass Windows Honoring Confederate Leaders : The Two-Way "Are these windows, installed in 1953, an appropriate part of the sacred fabric of a spiritual home for the nation?" The answer, the cathedral's leadership decided Tuesday, is no. 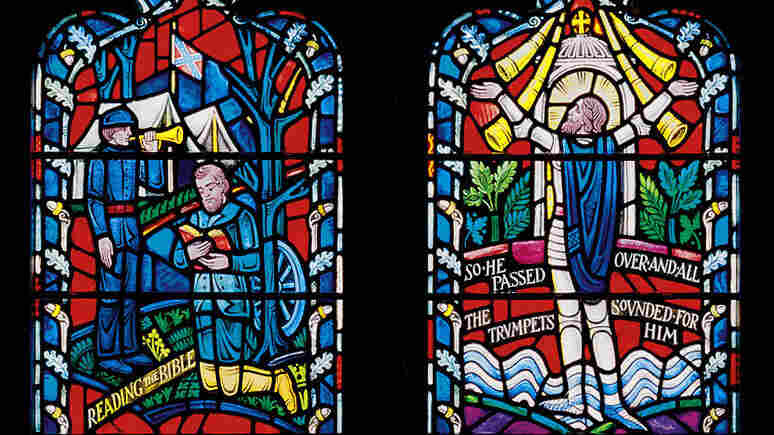 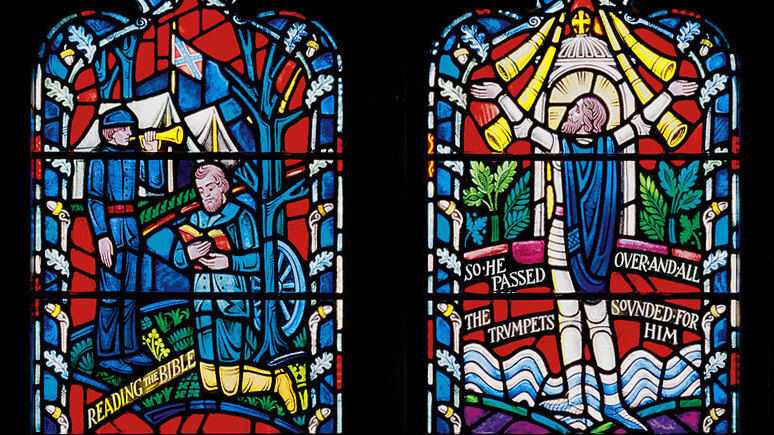 The Washington National Cathedral decided to remove the Confederate battle flag from its windows last year. Its leaders decided this week to take down stained-glass windows portraying Robert E. Lee and Stonewall Jackson.

Courtesy of The National Cathedral

The facility's leadership says the decision came after long deliberations on an important question: "Are these windows, installed in 1953, an appropriate part of the sacred fabric of a spiritual home for the nation?"

The answer, the National Cathedral's leadership decided Tuesday, is no.

The point, the Cathedral Chapter says, is to improve the narrative told to visitors and worshippers by the building in Washington, D.C., that calls itself "a spiritual home for the nation."

"We have concluded that these windows tell an incomplete and misleading account of our history," the cathedral says of the move. "We are committed to finding ways to offer a richer, more balanced expression of our nation's history."

The idea of removing Confederate symbols from the religious center came up two years ago, after the mass shooting of black churchgoers in Charleston, S.C.

"The recent violence in Charlottesville brought urgency to our discernment process," the cathedral's leaders said Wednesday, referring to the demonstrations and counterprotests over Confederate symbols in Virginia last month that left one woman dead and other people injured.

In June 2016, the National Cathedral decided to remove two images of the Confederate battle flag from the building's stained-glass windows.

At the time, as NPR's Camila Domonoske reported, the church planned to hold "a period of public discussion on issues of race, slavery and justice and revisit the question of how to treat other depictions of the Civil War on the windows."

The cathedral's leadership says they determined that the windows, which were sponsored by the United Daughters of the Confederacy, are inconsistent with its mission and also "a barrier to our important work on racial justice and racial reconciliation."

Last year, the cathedral said that its docents who give tours of the landmark building tell visitors that the inclusion of controversial figures such as Lee and Jackson "underscores the building's role as a repository of American memory, carrying the very wounds of war within its walls."

One of the windows portrays Jackson kneeling and reading the Bible; another window depicts Lee on horseback at Chancellorsville.

The statement was issued jointly by the Rev. Mariann Edgar Budde, bishop of the Episcopal Diocese of Washington; the Rev. Randolph Marshall Hollerith, dean of the Washington National Cathedral; and John Donoghue, who chairs the Cathedral Chapter group.

As for what will happen to the windows — and the voids they will leave — the cathedral's bishop and other leaders said, "These windows will be deconsecrated, removed, conserved and stored until we can determine a more appropriate future for them. The window openings and stone work in the Lee-Jackson Bay will be covered over until we determine what will go in their place."