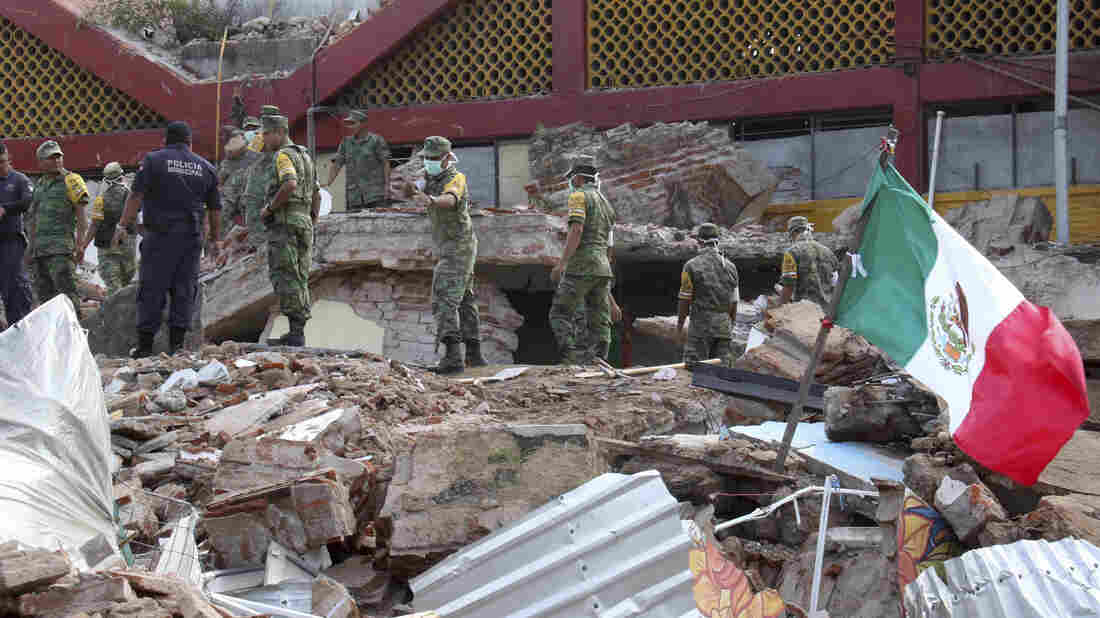 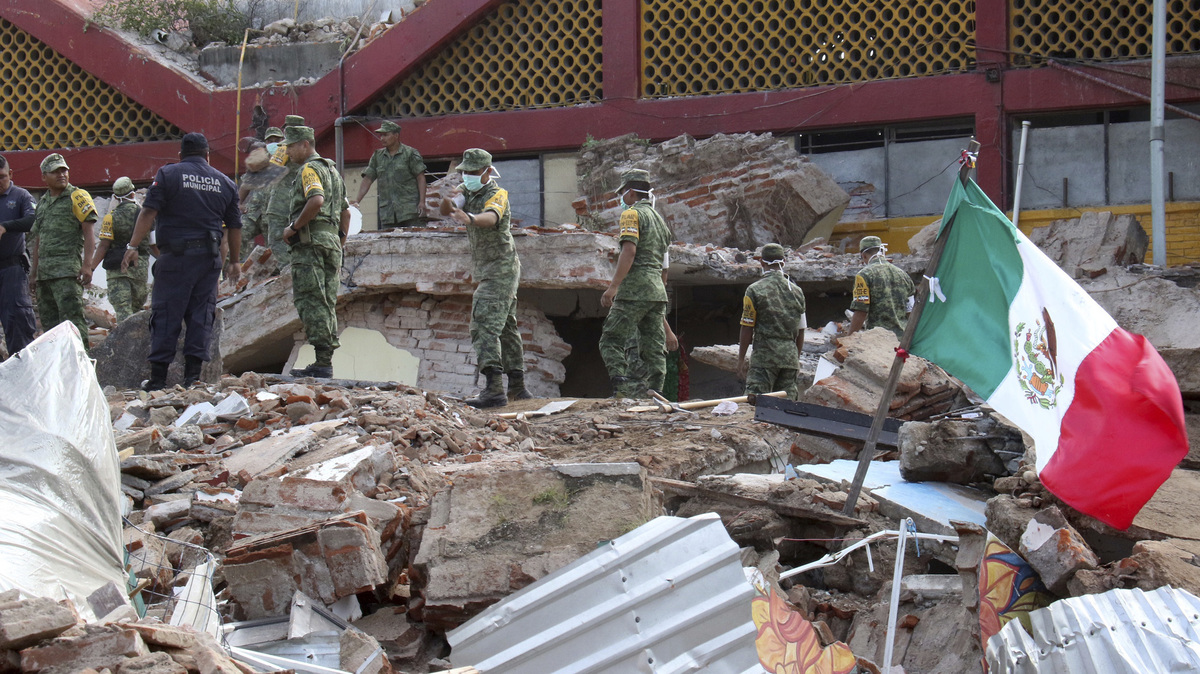 Soldiers remove debris from a partly collapsed municipal building, which was felled by a massive earthquake, in Juchitan, Oaxaca state, Mexico, on Friday.

The most powerful earthquake to hit Mexico in decades struck late Thursday off the country's southern coast and could be felt hundreds of miles away in the capital. The 8.1 magnitude temblor is blamed for killing at least 60 people. 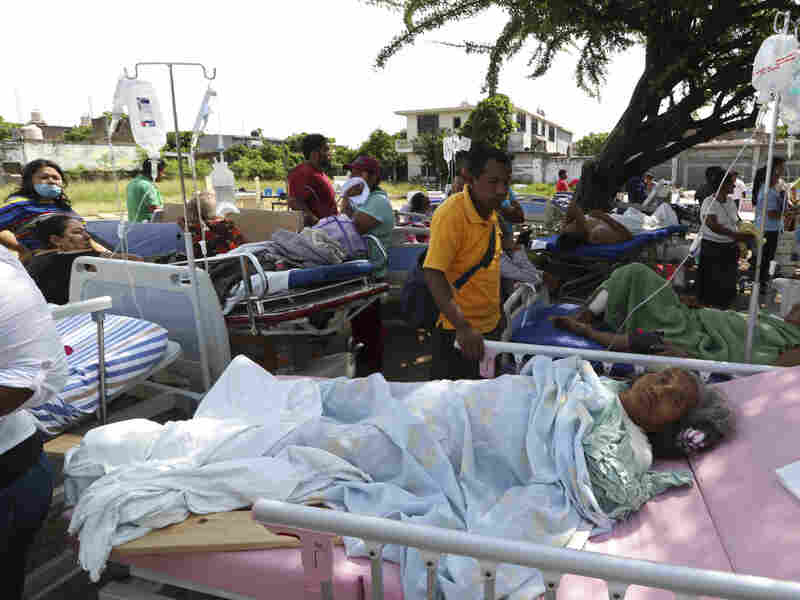 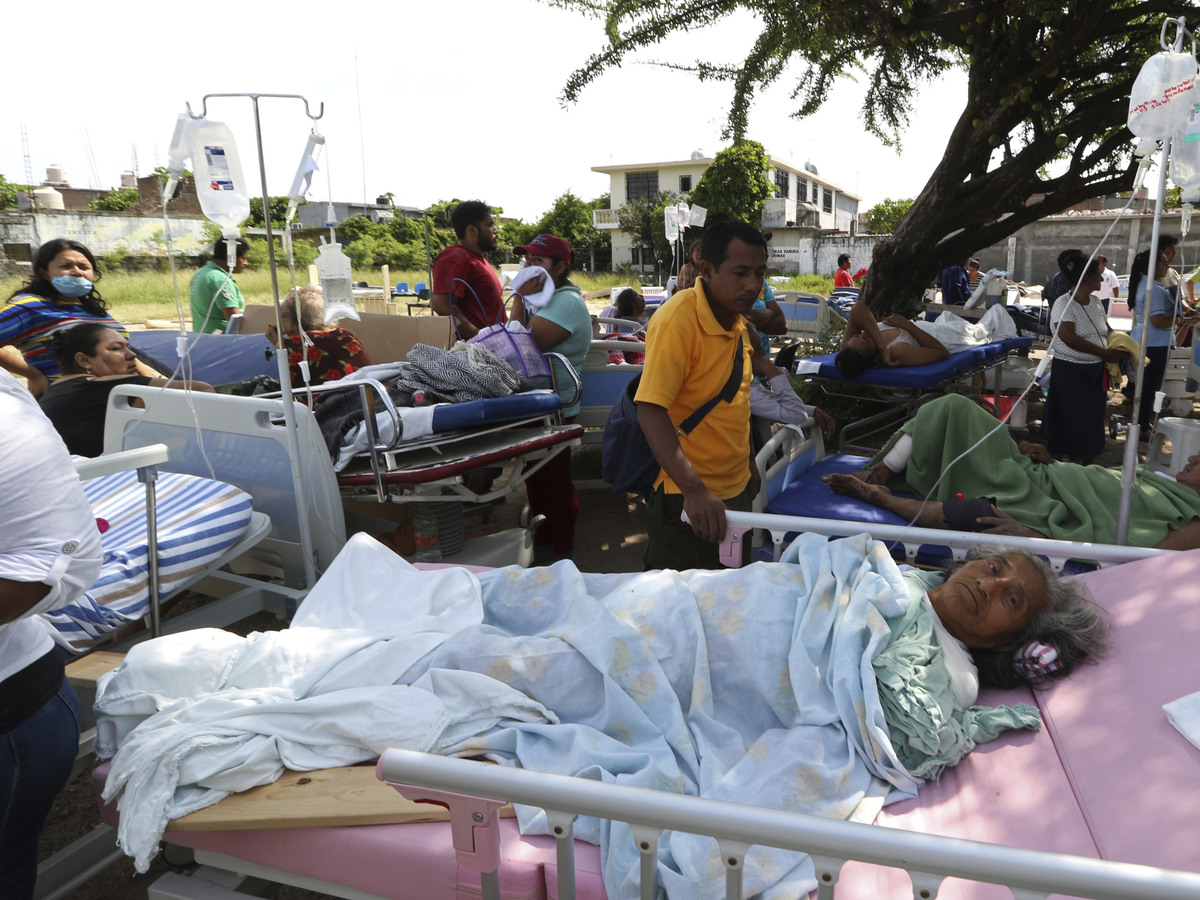 Evacuated patients lie on their hospital beds under a tree in Juchitan. At least 20 aftershocks followed the massive quake.

The quake triggered fears of a tsunami, although no major damage was reported. The event came as the country already was bracing for Hurricane Katia, which made landfall Saturday night in the state of Veracruz as a Category 2 storm.

The U.S. Geological Survey said the quake's epicenter was located 102 miles west of Tapachula in Chiapas, not far from Guatemala, at a depth of about 43 miles. Authorities in Chiapas report 12 deaths.

At least 45 people were killed in the state of Oaxaca, according to civil defense officials.

The Associated Press reports that "the worst-hit city appeared to be Juchitan, on the narrow waist of Oaxaca known as the Isthmus. About half of the city hall collapsed in a pile of rubble, and streets were littered with the debris of ruined houses."

"President Enrique Peña Nieto toured the area, where he met with residents amid the debris of crumbled buildings.

" 'The priority in Juchitan is re-establishing supply of water and food, as well as medical attention for those affected,' Pena Nieto said via Twitter."

Reuters notes that among 100 buildings "reduced to rubble" in Juchitan were a church and a hotel. The service quotes the mayor, Gloria Sanchez, as saying, "the situation in Juchitan is critical; this is the most terrible moment in its history."

Three people, including two children, were reportedly killed in Tabasco state. One was a baby on a ventilator who died when a children's hospital lost power, the AP says.

Peña Nieto said 1.85 million users in affected areas had lost electricity, but that 1.38 million had had their power restored.

"We are assessing the damage, which will probably take hours, if not days," Peña Nieto told the nation hours after the quake struck, adding that the population was safe and there was no need for panic.

Reporter Emily Green in Mexico City, 650 miles from the epicenter, tells Morning Edition that she was on the street when she heard an earthquake warning klaxon and felt the ground shake.

"It lasted a long time," she says. "It felt like more than a minute, but it was probably a minute."

Rodrigo Soberanes, who lives near the city of San Cristobal de las Casas in Chiapas state, was quoted by The Associated Press as saying his house "moved like chewing gum, and the light and Internet went out momentarily."

In Mexico City power went out in several neighborhoods and windows were shattered at the main airport, according to Reuters. However, the capital appeared to have escaped any major damage.

The governor of Chiapas, Manuel Velasco Coello, said three people were killed in the state in San Cristobal, including two women in a house collapse.

"There is damage to hospitals that have lost energy," he said, according to the AP. "Homes, schools and hospitals have been damaged."

Reuters reports that a number of buildings in parts of southern Mexico were severely damaged.

The USGS put the magnitude at 8.1, matching or exceeding the strength of a powerful earthquake that struck Mexico City in 1985, killing thousands of people. That could make it the strongest to hit Mexico in well over a century.