Accessibility links
Hurricane Irma: Tens Of Thousands Floridians Evacuate As Winds Sweep The South : The Two-Way A storm surge of up to 15 feet over parts of Florida remained one of the biggest concerns. "This will cover your house," Gov. Rick Scott warned. "You will not survive." 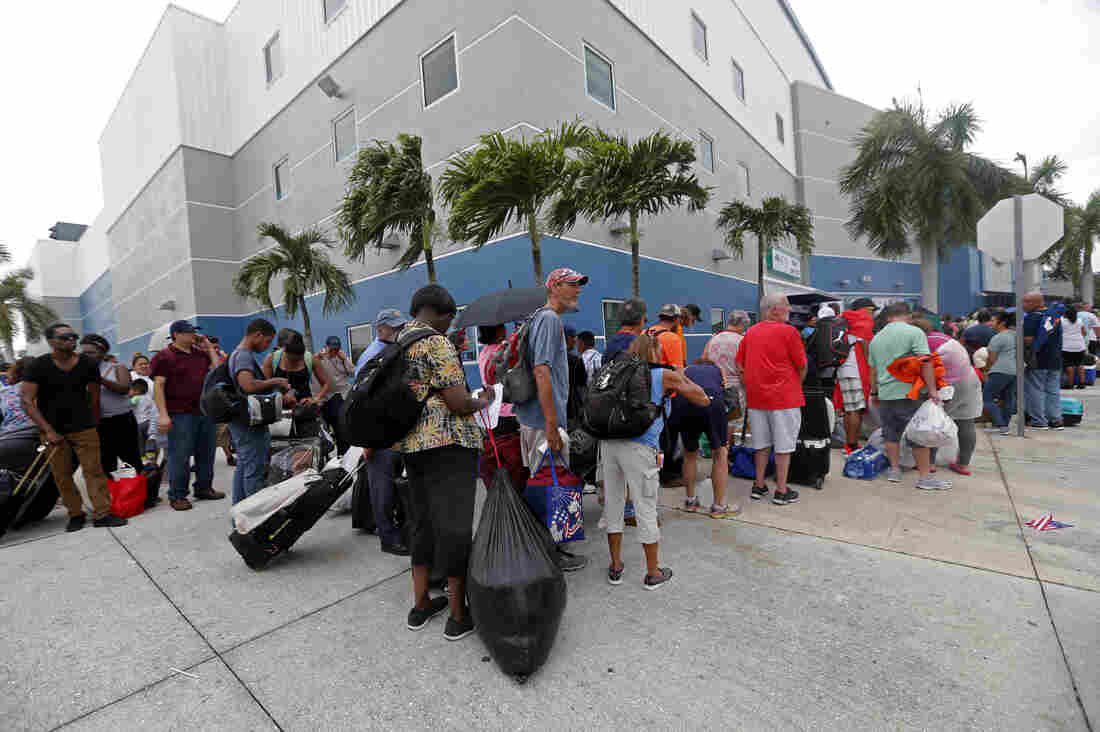 Evacuees stand in line to enter the Germain Arena, which is being used as a fallout shelter, in advance of Hurricane Irma, in Estero, Fla., Saturday. Gerald Herbert/AP hide caption 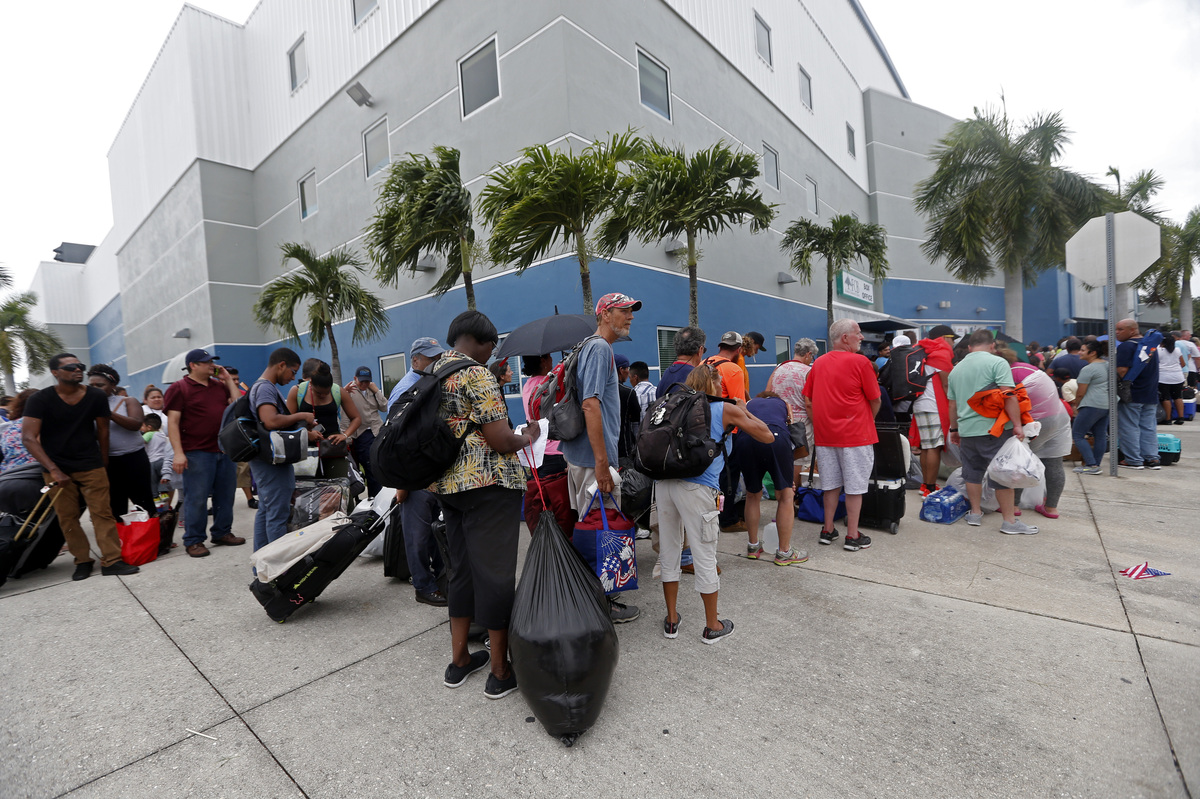 Evacuees stand in line to enter the Germain Arena, which is being used as a fallout shelter, in advance of Hurricane Irma, in Estero, Fla., Saturday.

After battering Cuba on Saturday morning, the eye of Hurricane Irma has its sights set on Florida as a Category 4 storm with maximum sustained winds of 130 mph, according to the National Hurricane Center early Sunday. The NHC's latest forecast shows the storm's center shifting west from Miami, and even Tampa, to target St. Petersburg.

More than 76,000 people are without power, Florida Gov. Rick Scott said at a 6:20 p.m. press conference Saturday, a number that had more than tripled since the update he gave this morning. "It's going to get worse," he added.

"This is a deadly storm, and our state has never seen anything like it," Scott said in a 9:30 a.m. press conference. "Millions of Floridians will see major hurricane impacts with deadly storm surge and life-threatening winds." 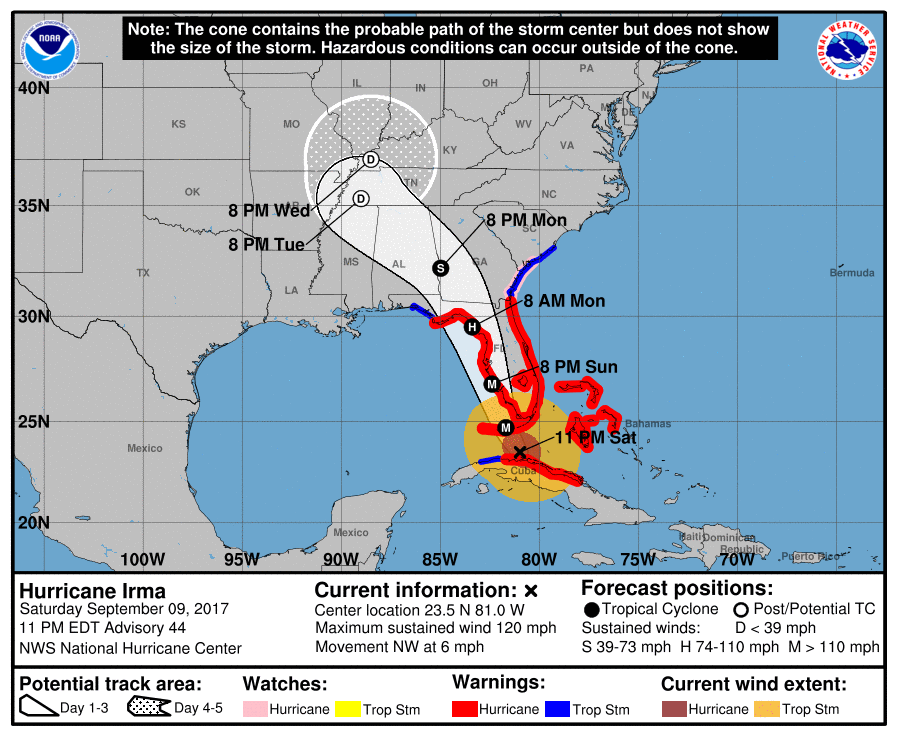 The governor says he plans to stay in Tallahassee tonight, but hopes to visit the Florida Keys as soon as possible.

On Saturday evening, Irma lingered over the northern coast of Cuba, about 90 miles southeast of Key West, Fla., and moving at 6 mph, according to the NHC. 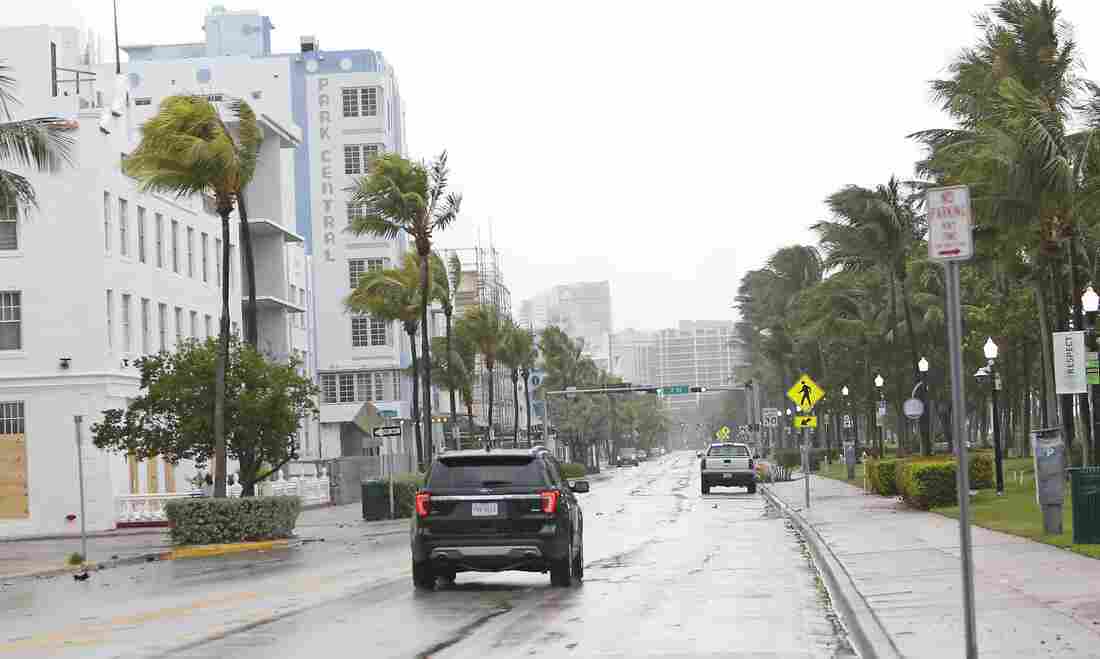 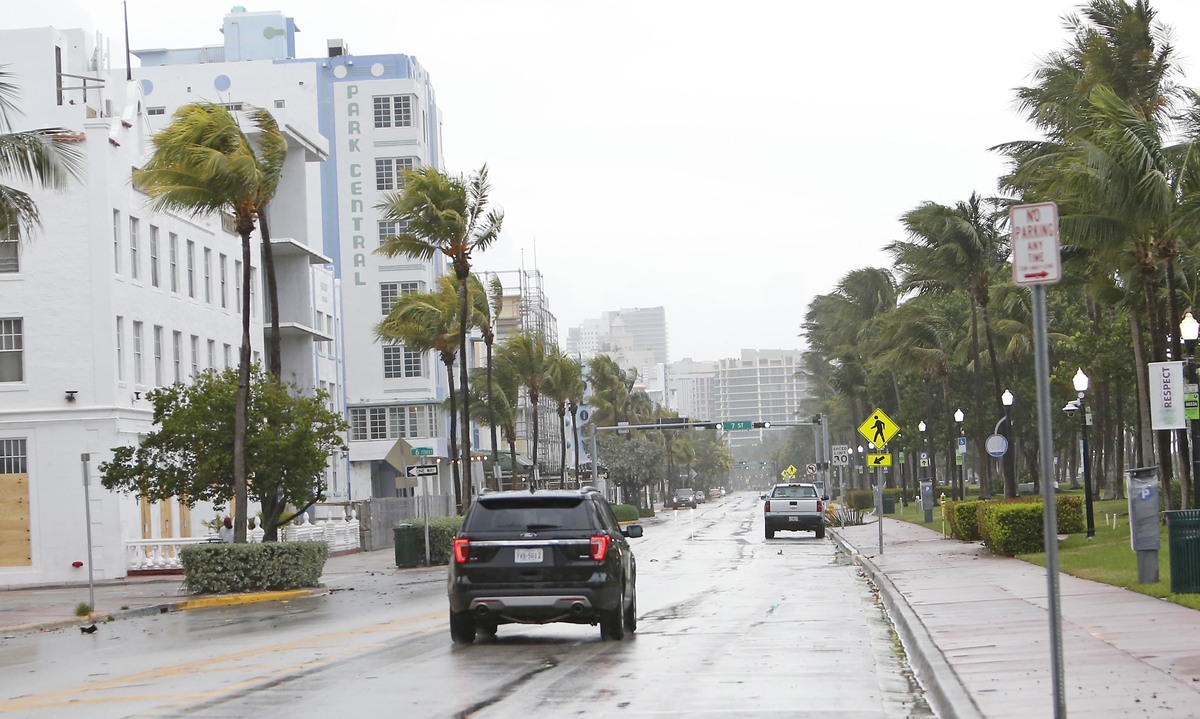 "Major hurricane force winds (are) expected over the Florida Keys at daybreak," according to the NHC advisory.

Forecasters say that as Irma moves over the warm waters off Florida's coast, it will strengthen.

"Conditions in S Florida will continue (to) get MUCH worse by late tonight through Sunday afternoon," the National Weather Center Miami tweeted Saturday.

The storm is expected to move northwest, says Michael Brennan, senior hurricane specialist at the NHC.

"That's going to take the core of the hurricane up or just onshore of the west coast of Florida during the day on Sunday into Sunday night," Brennan said.

But just because the storm is tracking westward does not mean Florida's east coast is in the clear.

A state of emergency remains in effect for all 67 of Florida's counties.

On Saturday, President Trump and his Cabinet were getting regular updates about the hurricane from Camp David, according to a White House official.

This is why @NWSKeyWest is saying to get out #irma pic.twitter.com/2xfv0anPsY

Although Irma's winds could cause major damage to structures and power lines, officials say the amount of water they could bring ashore is one of the biggest risks.

A storm surge warning was in effect Saturday for much of Florida's coast — both eastern and western.

The warning had been discontinued north of North Miami Beach to Jupiter Inlet, in NHC's latest advisory.

"On its current forecast track, there's a real threat of potentially catastrophic and life-threatening storm surge in the Gulf Coast communities of Southwest Florida," said Robert Molleda with the National Weather Service in Miami on Saturday. "Inundation from the storm surge could be as much as 15 feet deep in some areas near and along the Gulf Coast."

Gov. Scott reiterated that threat at a noon press conference: "There is a serious threat of significant storm surge flooding along the entire west coast of Florida, and this has increased to 15 feet of impact above ground level."

SPECIAL EMERGENCY MESSAGE from the National Weather Service in Miamihttps://t.co/UvLDSSz84N

Scott noted that residents could be lulled into a false sense of security after the winds die down but said that is when the storm surge comes.

"This will cover your house," Scott said. "If you've ever watched how storm surge works, it flows in fast, very fast, then it flows out. You will not survive."

The evacuation window was closing fast Saturday. Scott reiterated the call for residents under an evacuation order to get out immediately. "If you have been ordered to evacuate anywhere in the state, you need to leave right now," Scott said at the noon press conference. "You are running out of time to make a decision." 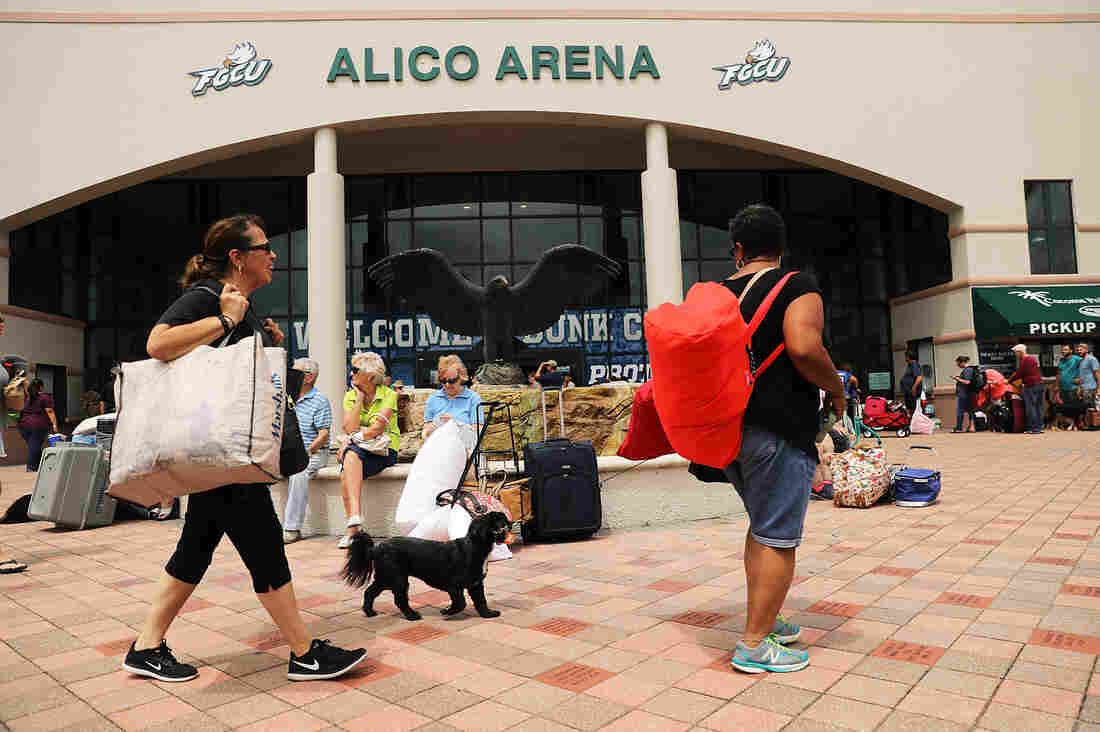 People arrive, many with their pets, at Alico Arena which is shelter thousands of Floridians hoping to ride out Hurricane Irma in Fort Myers, Fla., on Saturday. Spencer Platt/Getty Images hide caption 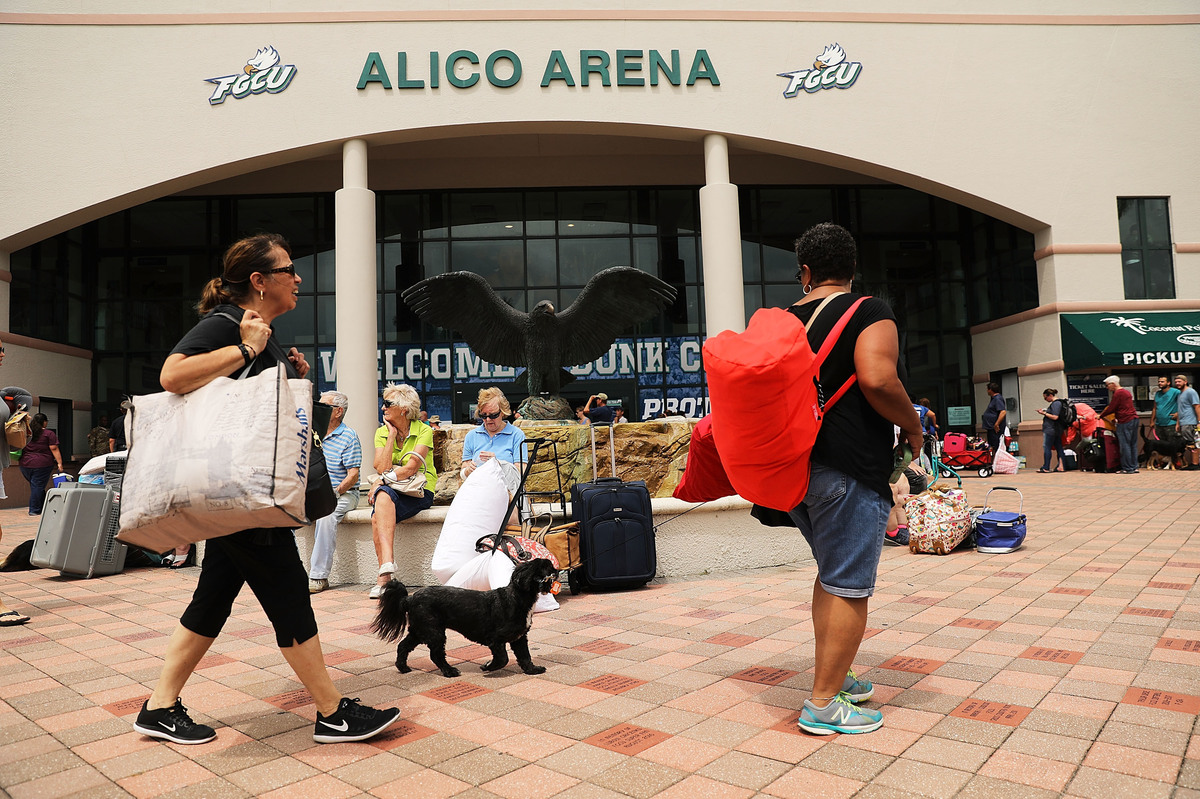 People arrive, many with their pets, at Alico Arena which is shelter thousands of Floridians hoping to ride out Hurricane Irma in Fort Myers, Fla., on Saturday.

More than 6.5 million Floridians have been ordered to leave their homes.

The National Weather Service Key West tweeted Saturday morning that everybody in the Keys, should "get out if you can," with a guide to "refuges of last resort."

Miami-Dade County said that Metrobus was to stop service to evacuation shelters at 2 p.m. Saturday.

Metrobus will stop service to evacuation shelters at 2 PM on Saturday, Sept. 9. https://t.co/iigyNICvXk

A complicating factor Saturday was the risk of tornadoes in the southern part of the state.

By Saturday morning, Miami was already being hit by the outer bands of the storm, bringing strong winds and heavy rain.

The weather forced NPR's Kirk Siegler to turn back after attempting to report from a Miami shelter. Earlier, he was able to meet with resident Gloria Negron who along with her dog, Lucky, got into a city shelter.

"We just have to do our best, inside there," Negron said. "There are too many people. And everybody is at the edge."

Negron had to spend the night sleeping in a chair, but she is one of the lucky ones. Siegler reports that the shelter has had to turn away others because of overcrowding.

During the storm, close storm shutters and stay away from windows. Flying glass from broken windows could injure you #FLPrepares

Scott said there were more than 385 shelters open across the state in every county by Saturday evening.

Scott put out a call Saturday for 1,000 volunteer nurses to help at special-needs shelters. Those interested should email: helpfl@flhealth.gov.

Other state residents have opted to ride out the storm in their homes.

Paul McNamara of Port St. Lucie tells NPR that his wife's profession — she is a nurse — meant she could not leave work, so they are staying put with their two children, ages 1 and 4.

"We have storm shutters, a generator, a lot of water, food, diapers and probably a large market share of the locally available flashlights," McNamara told NPR. "I imagine our shed will be leveled and our fence will disappear, but other than that, we should be scared out of our mind."

Meantime, Kyle Manders of Naples said he got out of town on Tuesday with his wife and dog.

"We didn't want to risk our lives, and we were able to secure our home quickly thanks to accordion shutters. Leaving behind the life we built in our home was a bit surreal. What keepsakes to save?" Manders added that lessons from Hurricane Harvey — a storm that brought rapid flooding — persuaded him to leave.

As Irma moves over land, it is expected to weaken, but it could still bring heavy winds and rains across the Southeast. As AP reports:

"By early next week, Irma is expected to track into the southeastern United States. Thus, all residents from Georgia through the Carolinas and into Virginia should prepare and monitor the progression of this very dangerous hurricane."

Parts of Georgia and South Carolina were under hurricane and storm surge watches Saturday.

A state of emergency is in effect in 30 counties in Georgia, and Gov. Nathan Deal has issued a mandatory evacuation order for parts of coastal Chatham County. Most of the city of Savannah fell under a voluntary evacuation Saturday.

Meantime Johnny Kauffman from member station WABE reports that Atlanta residents and others in northern Georgia were preparing to house evacuees from the coast and Florida. 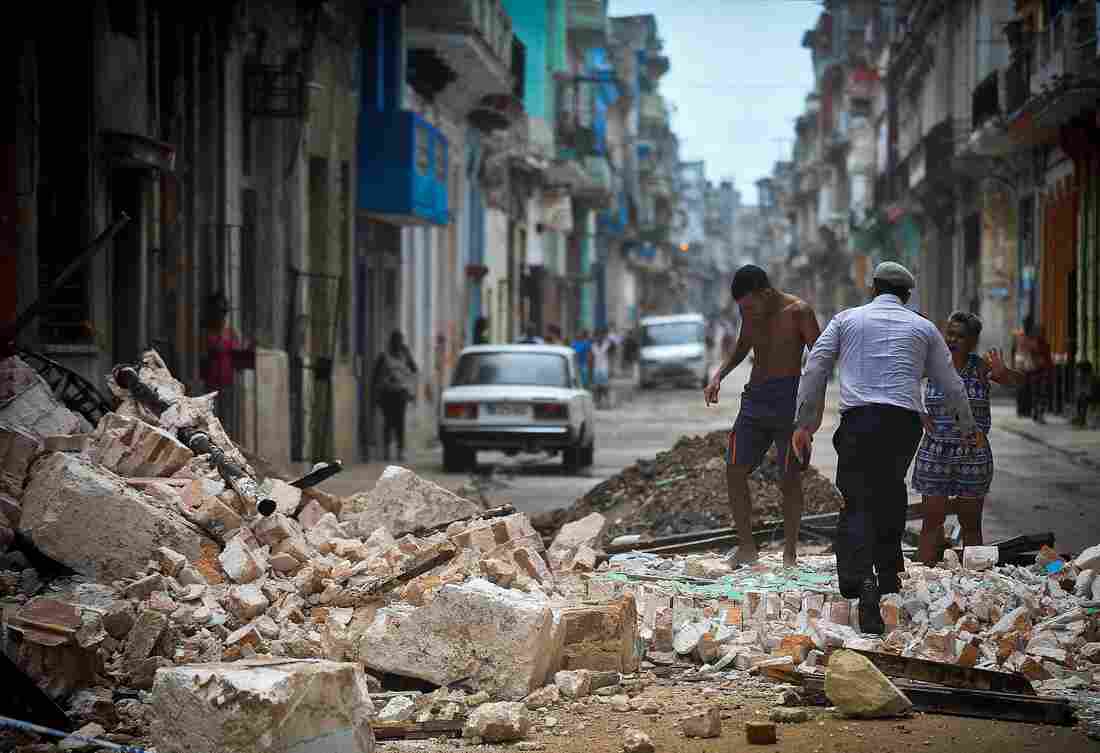 Cubans wade through the rubble from a collapsed building in Havana, on Saturday. The Cuban government extended its maximum state of alert to three additional provinces, including Havana, amid fears of flooding in low-lying areas. Yamil Lage/AFP/Getty Images hide caption

When Irma made landfall in Cuba early Saturday, it was still a Category 5 storm. It ripped across the island nation's northern shores, downing power lines, bending palm trees and sending huge waves crashing over sea walls, reports The Associated Press.

CNN reports that conditions were expected to deteriorate into Saturday even as the storm moved away, "but it could take a long time before the full extent of the damage is known."

Irma has left devastation across the Caribbean, killing at least 22 people (a number that is expected to grow), leveling basic infrastructure and leaving thousands homeless.

Barbuda and the British Virgin Islands are among the worst hit.

Paul Exner, an American citizen in Tortola, the largest of the British Virgin Islands, posted a video plea to Facebook.

"It is fairly critical that aid in terms of food and water is brought to the island," Exner said Friday night.

French, American and British relief have all been dispatched to the region.

Damages from Irma were estimated to be $1.44 billion by Saturday, reports the AP.

Part of a storm-battered region will unfortunately not be granted much of a reprieve.

"Jose is out there, and it is actually, unfortunately, affecting some of the same areas in the northeastern Leeward Islands that were hit very very hard by Irma just a few days ago," said Brennan of the National Hurricane Center.