Accessibility links
Nun With A Chainsaw Becomes Symbol Of Post-Irma Cleanup: 'She Rocks' : The Two-Way When downed trees blocked the road near Sister Margaret Ann's school in southwest Miami-Dade County, she grabbed a chainsaw and got to work.

The cleanup after Hurricane Irma is a massive undertaking, after the destructive storm hit Florida and neighboring states over the weekend. In Miami, a nun chipped in to clear trees in her neighborhood — and no one, it seems, can resist a story about a chainsaw-wielding nun.

Sister Margaret Ann was spotted at work by an off-duty officer of the Miami-Dade Police Department, which posted video and images from the scene in the community of Kendall West Tuesday.

The department calls the sister's work another sign that Miami's community will work together to repair what Irma broke, writing on its Facebook page, "Thank you Sister and all of our neighbors that are working together to get through this!"

Sister Margaret Ann is the principal of Archbishop Coleman F. Carroll High School, southwest of downtown Miami, which wrote on its Facebook page early Wednesday, "We are so blessed to have her and the Carmelite Sisters at our school. We are proud of the example they show for our students and other members of the community every day."

The phrase "chainsaw-wielding nun" is one we didn't know we would need to use in the wake of Irma, but it shows the breadth of the work it will take to recover from this storm — in Florida, in neighboring states and in the Caribbean.

The nun with a chainsaw habit quickly drew interest beyond Miami. She made headlines in England; CNN interviewed her Tuesday night. 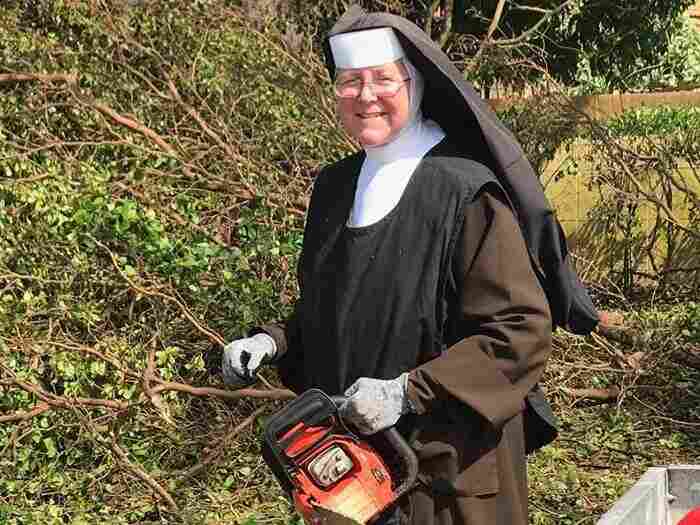 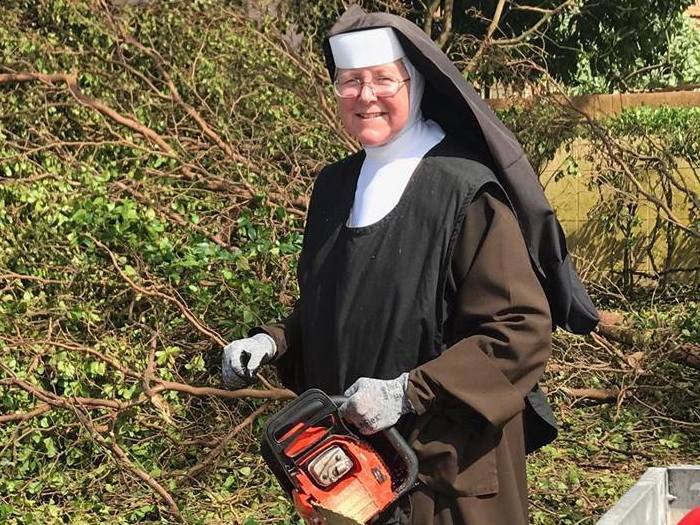 Sister Margaret Ann was spotted at work, chainsaw in hand, by an off-duty officer of the Miami-Dade Police Department.

"The road was blocked, we couldn't get through," Sister Margaret Ann told CNN. "And I saw somebody spin in the mud and almost go into a wall, going off the road. So, there was a need, I had the means — so I wanted to help out."

The chainsaws were sitting in a closet at her school, Sister Margaret Ann said, "and they didn't belong there. They needed to be used."

By using the chainsaw, the nun said, she was trying to live up to something her school teaches its students: "Do what you can to help."

Sister Margaret Ann's example resonated online. On the Miami-Dade police page, Annette Zayas wrote a comment saying, "She attends my parish and always has this warm smile with everyone she meets."

When Hurricanes Churn, A Little Hotel Becomes Something More

People thanked the nun — and discussed the difficulty of handling a chainsaw wearing a habit.

"Somebody made a comment that she was not handling the chainsaw correctly. I was raised 'do the best you can and after the day you can go home proud.' That is all we ask for, she rocks," Eggert Edwald wrote on the Miami-Dade Police page.