Accessibility links
San Diego Washing Streets With Bleach To Combat Hepatitis A Outbreak : The Two-Way The disease has killed at least 15 people and infected nearly 400 in the city, and it is hitting the homeless population the hardest. 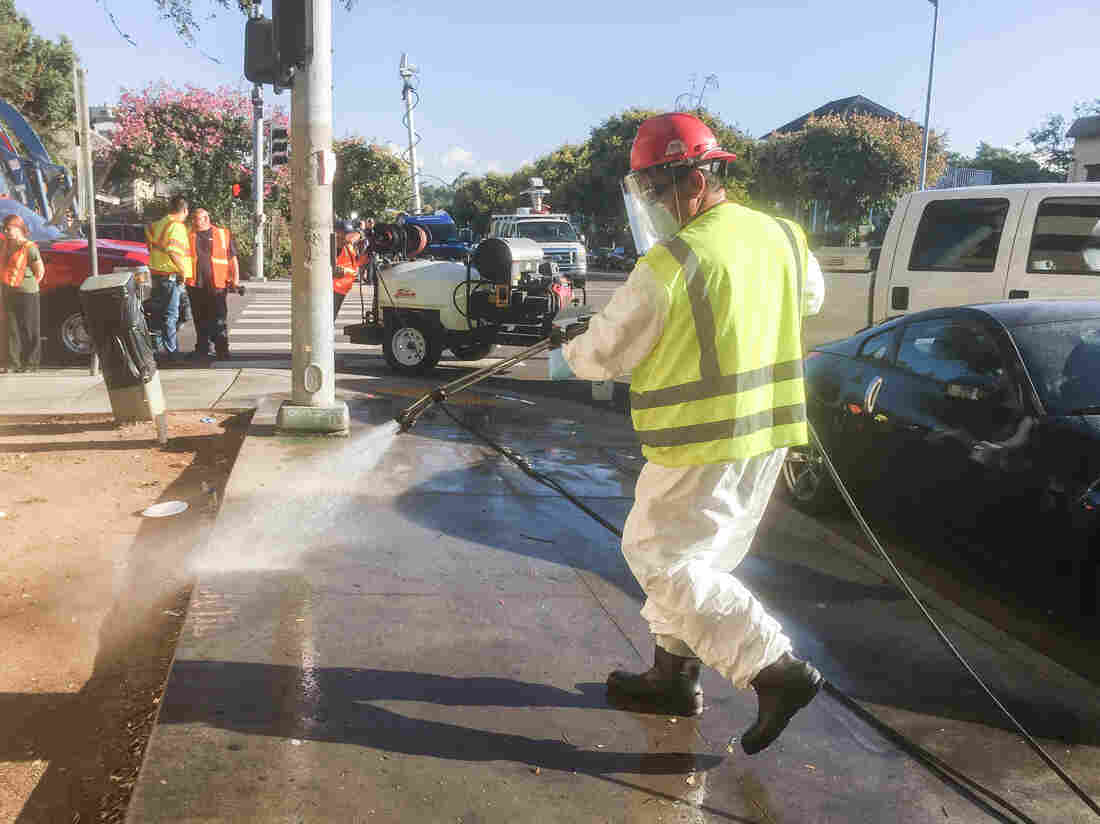 City workers wash down streets and sidewalks Monday in an effort to control a hepatitis A outbreak in San Diego. Susan Murphy/KPBS hide caption 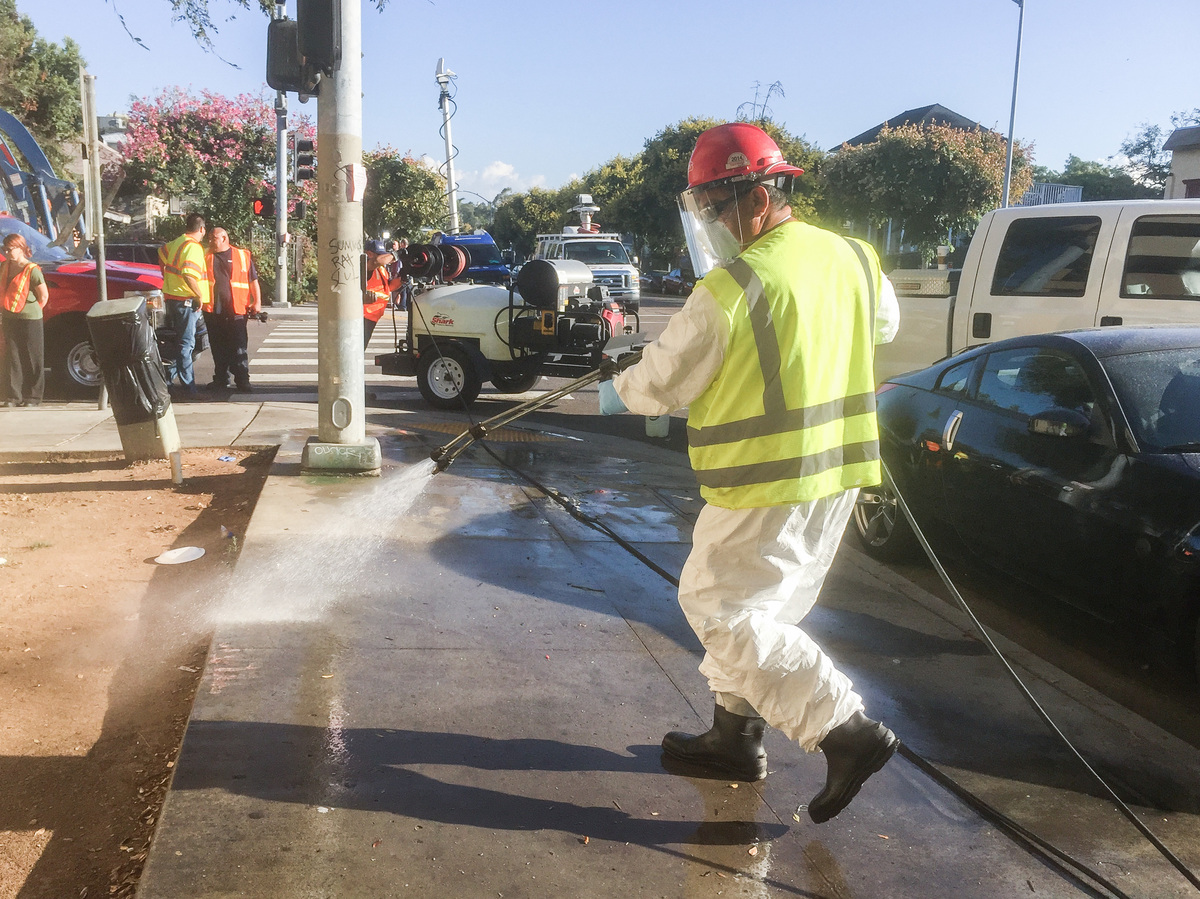 City workers wash down streets and sidewalks Monday in an effort to control a hepatitis A outbreak in San Diego.

San Diego has started washing its downtown streets with bleach in an effort to combat an outbreak of hepatitis A that has killed at least 15 people and infected nearly 400.

The infectious disease has largely infected homeless people in the coastal California city, and part of the issue is an apparent shortage of public restrooms in areas where the population congregates.

Hepatitis A was first identified in the area in early March, according to the county, and declared a public health emergency earlier this month.

A letter from San Diego County health officials stated that hepatitis A is being spread though contact with a "fecally contaminated environment" as well as person-to-person transmission.

The county issued a directive on Aug. 31 demanding that the city carry out street washing and expand public restroom access, adding that "failure to immediately follow this directive will endanger public health and safety."

On Friday, the city said it would "fully comply with the directive," targeting areas in downtown frequented by homeless people at risk of contracting hepatitis A.

Contractors started spraying down areas Monday with the diluted household bleach solution, continued Wednesday, and are set to hit the final zone of downtown by Friday, according to a city spokesperson.

The procedure, as prescribed by the county, involves first spraying down hazardous items such as human waste or needles, waiting 10 minutes, removing the contaminated items, then spraying the area again with bleach. After that, it calls for pressure-washing the area with water.

It is set to be repeated every two weeks, with weekly "spot maintenance," according to county guidelines.

San Diego County did not immediately respond to an NPR query about whether it is satisfied with the city's response.

Mike Saag, a professor of medicine at the University of Alabama, Birmingham focused on infectious diseases, tells NPR that he finds San Diego's street washing approach reasonable for stemming the spread of hepatitis A: "If there's a sanitation problem, then the thing to do is clean up the area, and bleach is probably the best disinfectant that we have for this type of viral infection."

He adds that "once hepatitis A starts to be transmitted in a community like this, it's kind of hard to stop." The most effective tactic is immunization, he says, and San Diego County says it is has provided at least 19,000 immunizations against the disease.

"The issue is getting people, especially those who might be living on the street, into care and getting the series [of shots]," Saag adds.

There have also been more than 250 mass vaccination events, and nurses have been deployed to areas with large homeless populations, according to the county. Dozens of hand-washing stations have been installed, with more on the way.

San Diego's homeless population has skyrocketed — the number of people living on downtown streets is up some 27 percent to nearly 1,300, according to The San Diego Union-Tribune. It's particularly visible owing to the 104 percent increase in the number of tents and hand-built structures, the newspaper adds.

A lack of affordable housing is contributing to the problem — "seventy-seven percent of unsheltered people said they became homeless in San Diego," the Union-Tribune reports.

Councilwoman Lorie Zapf recently told member station KPBS that she is concerned about the amount of waste in her area as a result of illegal encampments.

"I went down there myself in July and what I saw with my own eyes was an insane amount of trash," Zapf said. "I saw human feces, meth cookers, syringes, stolen property — and all of this will flow right to the ocean if it is not cleaned up, and it will spread hepatitis A virus."

Hepatitis A is considered highly contagious, according to the CDC, and attacks the liver. Its prevalence in the U.S. has declined by 95 percent since 1995, when the vaccine was first introduced.