Accessibility links
At Least 8 Dead At Florida Nursing Home After Irma : The Two-Way Police in Hollywood, Fla., confirmed they are investigating the deaths. The facility may have been without air conditioning following the storm, according to multiple news reports. 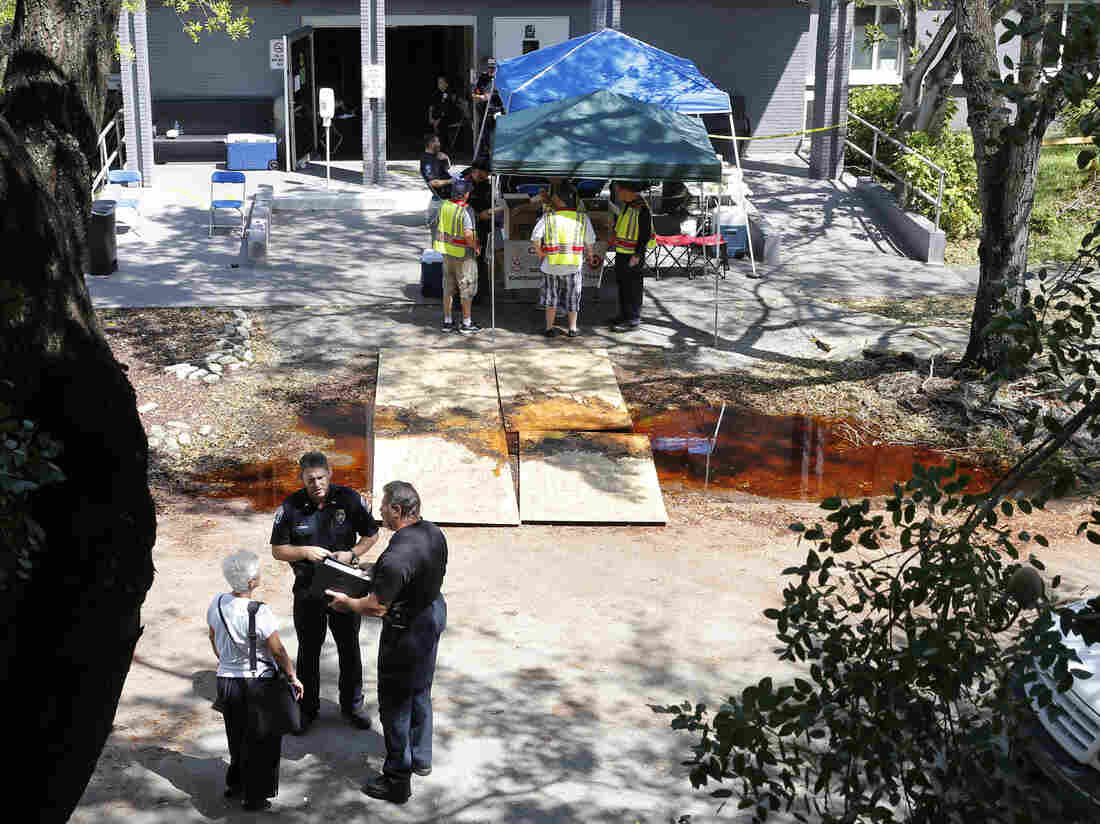 Police said that three people were dead when officers arrived at The Rehabilitation Center at Hollywood Hills in Hollywood Fla., and that five others died later. Marta Lavandier/AP hide caption 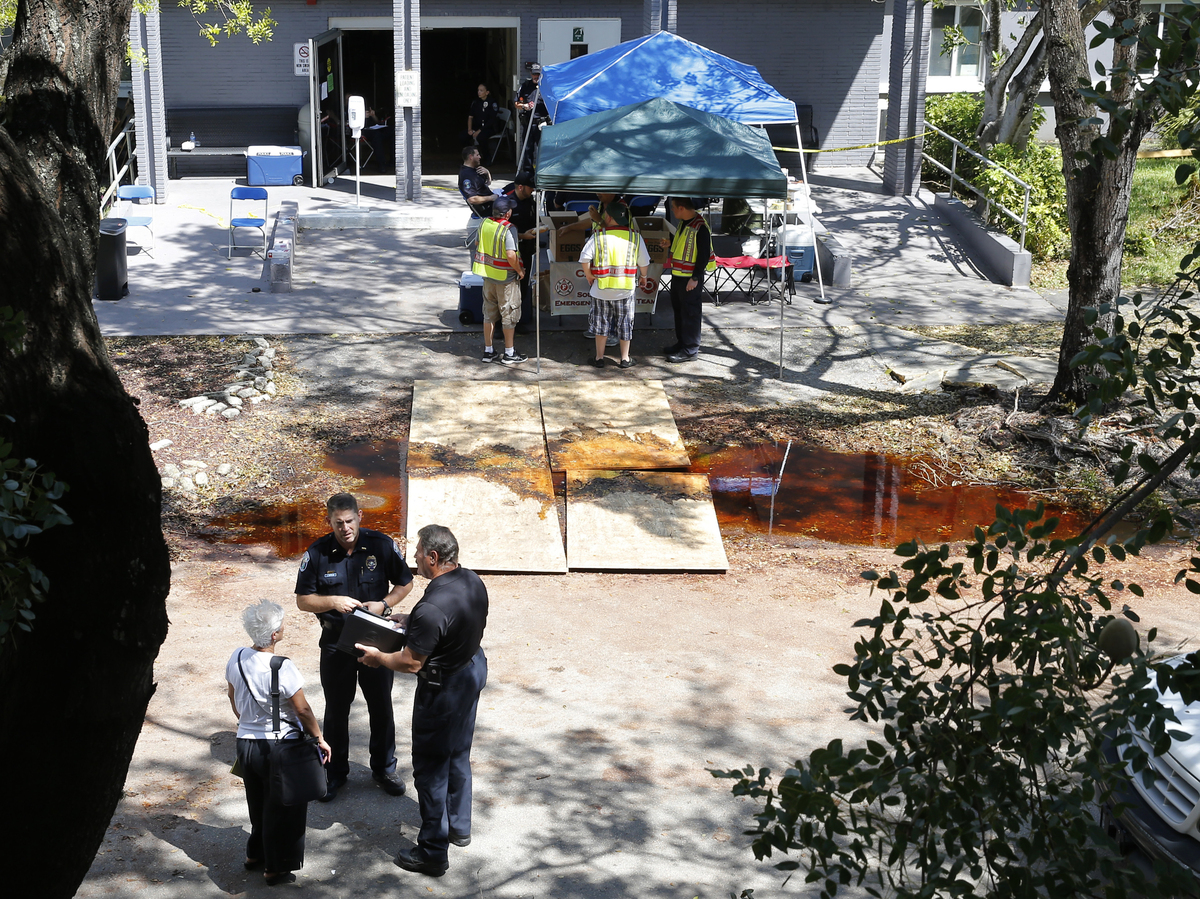 Police said that three people were dead when officers arrived at The Rehabilitation Center at Hollywood Hills in Hollywood Fla., and that five others died later.

Eight people have died after a Florida nursing home and long-term-care facility apparently lost air conditioning in the aftermath of Hurricane Irma, and police have launched a criminal investigation into the incident.

Hollywood police later tweeted that they had evacuated 158 patients to local hospitals.

Chief Sanchez - we evacuated the 158 patients out of the facility and evacuated them to area hospitals. pic.twitter.com/5IEsngUWx3

"The suspicion is that these deaths should not have occurred," NPR's Jon Hamilton reports from the scene. Jon says that "apparently, the facility lost some, but not all of its power after Hurricane Irma."

There are some conflicting details about exactly how much power the building lost. Jon reports: "As of Tuesday, [the facility] was reporting that everything was OK, that they were using portable air conditioners and fans." Then, police responded to a 911 call and found three people dead and others in struggling health.

Sanchez declined to say exactly how hot it was in the building when authorities arrived, simply saying: "I can tell you it was very hot on the second floor." He also would not state how long and how much of the building was without power, saying it was part of the criminal investigation.

A kitchen worker at the center told the Miami Herald that the facility "had power from a generator to cook meals, but no air conditioning."

More than 100 residents were evacuated from the facility, Broward County Deputy Fire Rescue Chief Tim Keefe said at a news conference earlier Wednesday. Some were from facilities nearby.

When asked whether police responded quickly enough to a distress call, Sanchez said that there is dispute about when exactly the call came in, though he estimated that it was about 6 a.m. He added that the initial call was about a heart attack and that rescue workers began evacuating patients between 7:15 and 7:30 a.m.

Randy Katz, medical director of emergency services at the nearby Memorial Regional Hospital, said that when hospital officials heard about the situation, "we mobilized at least 50 to 100 of our employees that left the hospital, ran down the street, pulled all of these patients out of the facility and made sure they got to a safe place."

He added that the patients who have been admitted to the hospital are mostly being treated for "respiratory distress, dehydration and heat-related issues."

According to the Herald:

"The National Weather Service's tracking in Hollywood put the temperature at 80 to 82 degrees overnight with a heat index of 85 to 90 after a Tuesday afternoon high temperature of 90 and a peak heat index of 99. Hollywood Public Affairs Director Raelin Story said there is no official cause of death yet, but a number were having respiratory issues.

"Like many places in South Florida, the nursing home has been without power since being blasted by tropical storm winds with hurricane gusts on the edge of Hurricane Irma."

Police were checking on more than 40 other nursing facilities in Hollywood, Kate Stein of member station WLRN tells NPR's Newscast unit. She adds that utility providers have said they hope to have power restored for all of southeastern Florida by the weekend.

Keefe said about one-third of Broward County was still without power. The mayor has sent out an alert to other areas in Florida to conduct a welfare check on all elderly residents because of the heat.

Jack Michel, the sole person listed on the nursing home's corporate registration in Florida, appears to have been accused of fraudulent activity in the past. A person by the same name was among several people who were listed as current or former owners of a Miami hospital and who paid a $15.4 million settlement over an alleged scheme in which the hospital "paid kickbacks to physicians in return for patient admissions," according to the Department of Justice.

Jon adds that there are other causes for concern about the Hollywood facility:

"It appears that there's a pending lawsuit alleging negligence. Under a previous owner, the place was found to have committed Medicare fraud. ... There's been a bankruptcy, a change of ownership and Medicare inspectors have given this place below-average ratings."