Accessibility links
Trump: GOP Leadership 'On Board' With Deal Over DACA : The Two-Way After denying a deal earlier, Trump said he and Democratic leaders were "working on a plan" to protect DREAMers but later created confusion over whether his hoped-for border wall would be part of it. 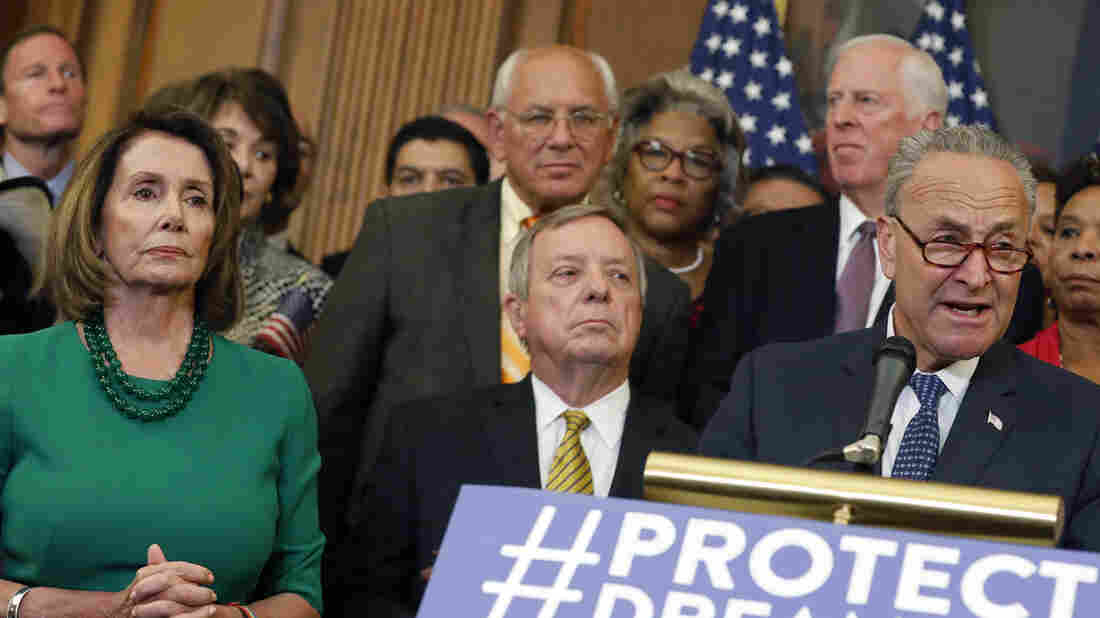 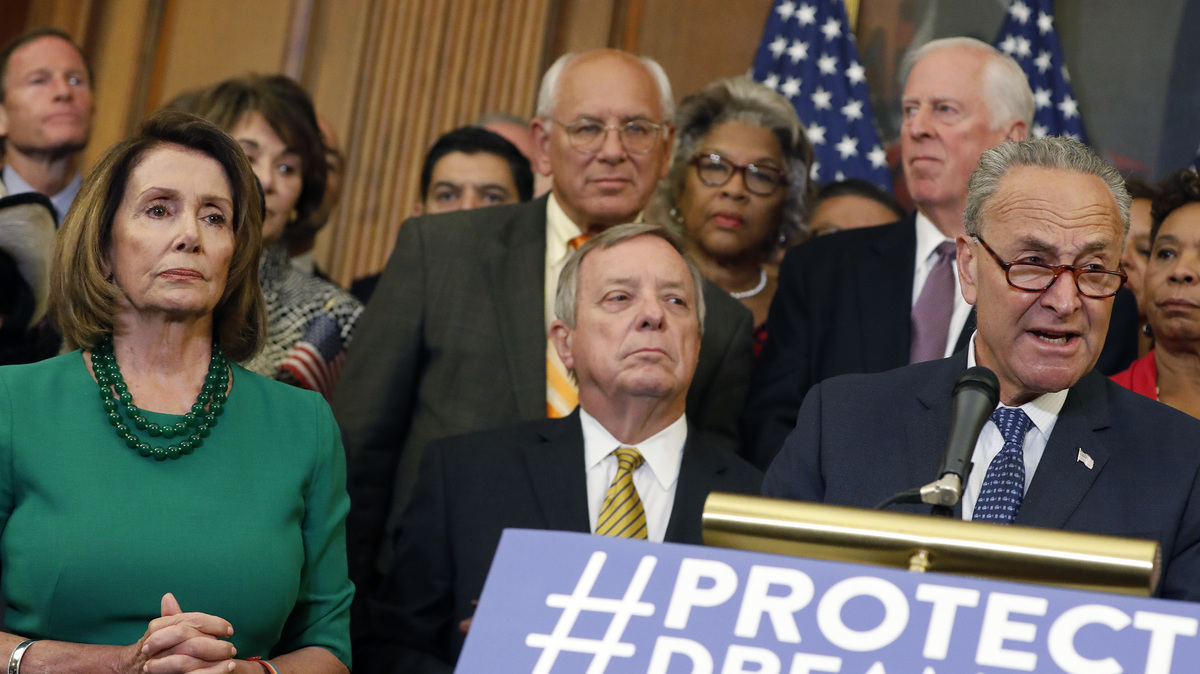 House Minority Leader Nancy Pelosi and Senate Minority Leader Chuck Schumer spoke on Sept. 6 about President Trump's decision to end DACA. The two now say they have worked out a deal with Trump on legislation.

President Trump affirmed Thursday morning that a deal was in the works with Democrats that would protect some 800,000 DREAMers who could face deportation when DACA expires next year in exchange for "massive border controls."

It wasn't clear, however, whether a border wall would be part of an emerging pact, as Trump had seemed to suggest at one point.

Hours later, he said: "We'll only do it if we get extreme security, not only surveillance but everything that goes with surveillance. If there's not a wall, we're doing nothing."

The latest round of mixed messages comes after leading Democrats indicated Wednesday evening that they were close to a deal to save the Deferred Action for Childhood Arrivals program, which is scheduled to end in March. That appeared to be thrown into doubt when the president tweeted Thursday morning that "no deal" had been made, only to be followed by remarks to reporters that he and Democrats were "working on a plan — subject to getting massive border controls."

"We're working on a plan for DACA. People want to see that happen," the president said at one point on Thursday. "You have 800,000 young people, brought here, no fault of their own. So we're working on a plan, we'll see how it works out. We're going to get massive border security as part of that. And I think something can happen, we'll see what happens, but something will happen."

Trump said Senate Minority Leader Chuck Schumer and House Minority Leader Nancy Pelosi, who had dinner with the president Wednesday night, "agree with it." He added that he had spoken with Senate Majority Leader Mitch McConnell and House Speaker Paul Ryan and they are "on board."

But that was followed Thursday by a suggestion that the issue of the border wall, a key campaign promise for Trump, could still derail the deal.

"Very important is the wall. We have to be sure the wall isn't obstructed," he said.

Right-wing news site Breitbart, with former White House adviser Steve Bannon back at the helm, had called the president "Amnesty Don" in a headline Wednesday.

Schumer and Pelosi put out a statement Thursday acknowledging that a deal had yet to be finalized but said that the president's tweets suggesting otherwise were "inconsistent" with the partial agreement reached Wednesday night.

"As we said last night, there was no final deal, but there was agreement on the following: We agreed that the President would support enshrining DACA protections into law, and encourage the House and Senate to act," the joint statement from the House and Senate Democratic leaders said. "What remains to be negotiated are the details of border security, with a mutual goal of finalizing all details as soon as possible."

The latest characterizations of the evolving deal from both sides early Thursday followed considerable confusion.

In a statement issued Wednesday night, Schumer and Pelosi said they would work on legislation with the president to fund security on the U.S. border with Mexico that excludes Trump's longtime promise of a wall between the countries — though the White House initially disputed the recounting of that portion of the meeting.

The Democrats added that they "urged the President to make permanent" federal government subsidies under the Affordable Care Act and that "those discussions will continue."

The White House, for its part, called the dinner meeting "constructive" but didn't claim any breakthroughs. A White House official said that Trump and the lawmakers discussed multiple topics, including "tax reform, border security, DACA, infrastructure and trade" and that it was "a positive step toward the President's strong commitment to bipartisan solutions for the issues most important to all Americans."

White House press secretary Sarah Huckabee Sanders also denied that Trump had agreed to exclude the building of a border wall from any legislation.

While DACA and border security were both discussed, excluding the wall was certainly not agreed to.

Schumer's communications director, Matt House, responded that Trump "made clear he would continue pushing the wall, just not as part of this agreement."

Attorney General Jeff Sessions announced last week that the DACA program would be ending in March 2018 unless Congress took action to protect those affected. The administrative program, implemented by President Barack Obama in 2012, temporarily protected young people brought to the U.S. illegally as children from deportation if they met certain requirements. The program also let them apply for work permits but did not give them official legal immigration status.

As NPR reported last week, Sanders said Trump wants action to make the program permanent but only as part of a "comprehensive" immigration overhaul that would include ending illegal immigration, using a "merit-based" immigration system and preventing people from overstaying visas.

Trump indicated Thursday that he didn't want to "throw out" the DREAMers and seemed to advocate for increased border security with any legislation.

Does anybody really want to throw out good, educated and accomplished young people who have jobs, some serving in the military? Really!.....

...They have been in our country for many years through no fault of their own - brought in by parents at young age. Plus BIG border security

On Wednesday night, Sen. Jeff Flake of Arizona congratulated the president "for pursuing agreement that will protect #Dreamers from deportation." The Republican senator is particularly vulnerable in the 2018 elections, as NPR's Jessica Taylor noted Wednesday.

But conservative Republican Rep. Steve King of Iowa, who has a history of making anti-immigrant statements, responded to the news with a tweet calling a potential deal "Unbelievable!" and adding that the "Trump base is blown up, destroyed, irreparable, and disillusioned beyond repair. No promise is credible."

The announcement came a week after Democrats said they reached a deal with Trump on providing hurricane relief, temporarily raising the debt ceiling and funding the government — a deal that upset Republican leadership.

The prospect of Congress reaching an agreement on legislation to help DREAMers, however, is far from certain.

The DREAM Act has languished in Congress since it was originally introduced in 2001. Over the past 16 years, lawmakers have floated different versions of the bill. Each would grant permanent legal status to young immigrants who were brought to the country illegally, as long as they meet certain requirements.

Republicans want broader immigration policy legislation, including tougher border security measures, to be part of any type of DREAMer protection. Bennett says the "most likely path seems to be for Democrats to attach it to the must-pass fiscal legislation when it comes up again by early December."