Accessibility links
Florida Nursing Home Case: Many Questions, And Few Answers, After 8 Patients Die : The Two-Way The Rehabilitation Center at Hollywood Hills never lost power — but a transformer that drove its air conditioning unit was knocked out, leaving residents vulnerable to the heat and humidity. 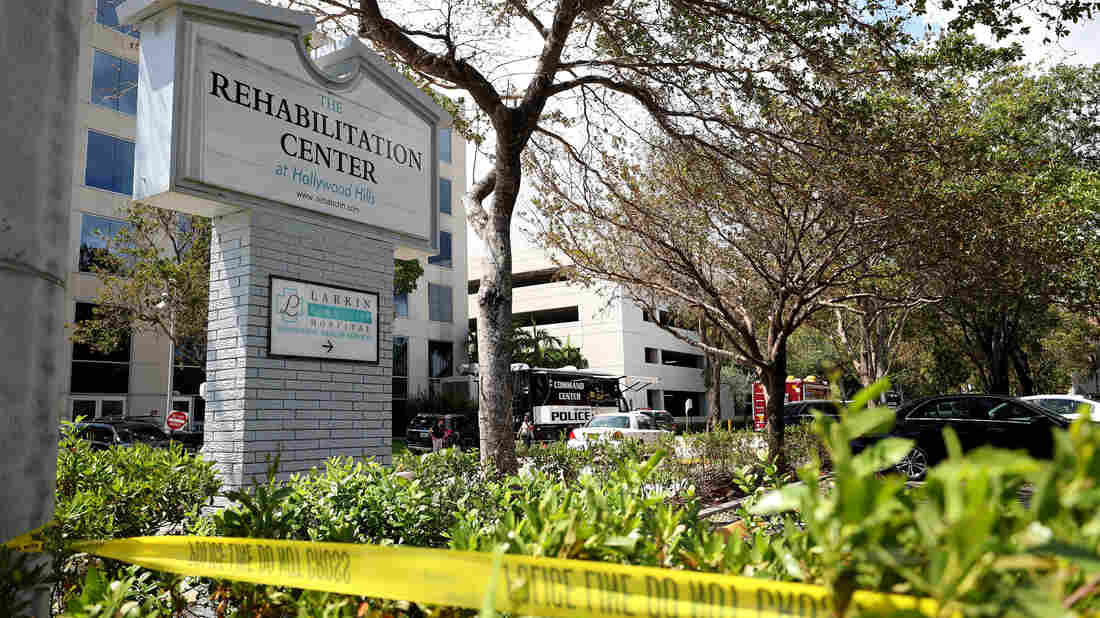 Police surround the Rehabilitation Center at Hollywood Hills, which had no air conditioning after Hurricane Irma knocked out a transformer, in Hollywood, Fla. John McCall/Sun Sentinel/TNS via Getty Images hide caption 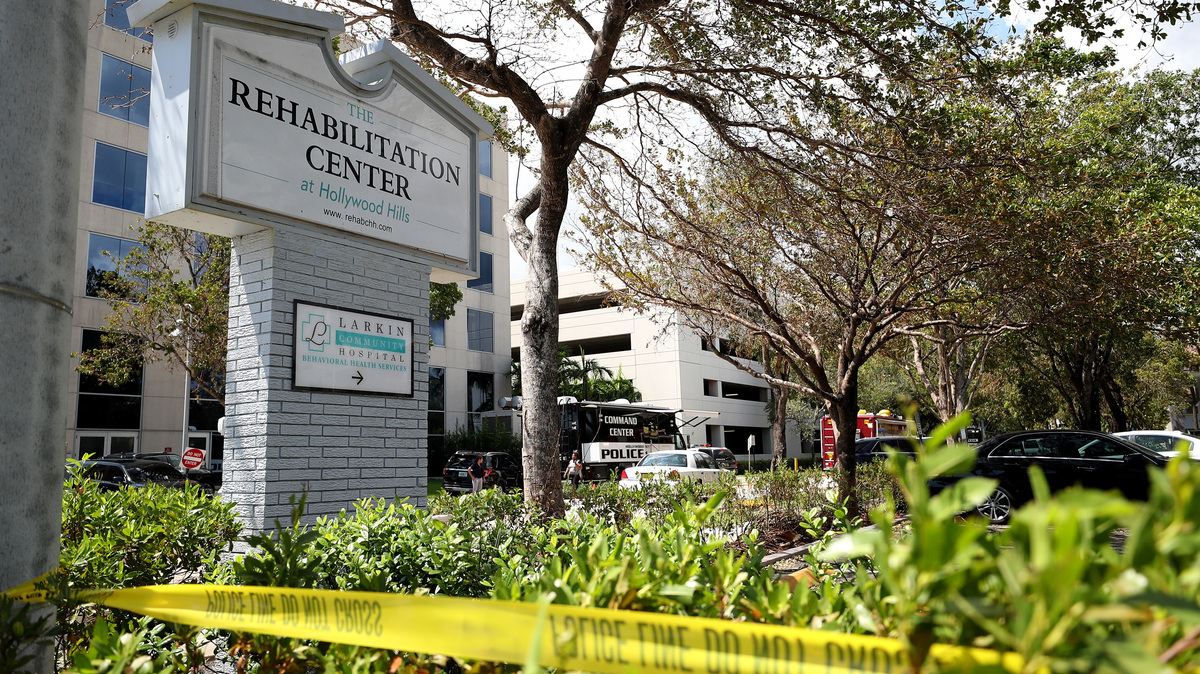 Police surround the Rehabilitation Center at Hollywood Hills, which had no air conditioning after Hurricane Irma knocked out a transformer, in Hollywood, Fla.

The shocking news that eight people who were residents of the Rehabilitation Center at Hollywood Hills in Hollywood, Fla., died at the facility in the aftermath of Hurricane Irma has sparked many questions about how such a thing could happen. It has also led to nearly 150 patients being taken to local hospitals.

"The Hollywood Police Department has been granted a search warrant for this property," Raelin Storey, the city's public affairs director, said at a news conference outside the nursing home Thursday morning.

Friday afternoon, the state's Agency for Health Care Administration said conditions at the facility present a threat to the safety of residents and it suspended the nursing home indefinitely from taking patients paid for by Florida Medicaid.

Others investigating include Florida's Agency for Health Care Administration and the Department of Children and Families. No arrests have been made in the criminal probe, according to police in the city just north of Miami.

Officials initially said as many as 158 people had been moved from the center; on Thursday, police clarified that 145 patients were sent to Memorial Regional Hospital — 141 from the center and four from an adjoining facility.

The Rehabilitation Center never lost power — but a transformer that drove its air conditioning unit was knocked out, the facility's administrator said Wednesday. The outage left the center's elderly and frail residents vulnerable to the heat and humidity.

There are currently no patients at the center. Florida Gov. Rick Scott has ordered an "immediate moratorium" to prevent it from receiving any patients; officials are also checking on other assisted-care facilities and evacuating them if they've lost power.

Key details of the Hollywood Hills incident remain unknown, even after officials delivered an update Thursday morning. Among them:

Officials acknowledged many of those questions at Thursday's briefing, but they also said they're still working on definitive answers.

As patients suffered at the Rehabilitation Center, help wasn't far away: The facility is located across the street from a medical complex that includes the Memorial Regional Hospital — where the center's patients were taken after the scope of the problem became evident.

"We are managing 115 patients throughout the Memorial hospitals," Memorial Healthcare System spokesperson Kerting Baldwin said Wednesday. "Generally, we are treating dehydration, heat exhaustion and severe respiratory conditions, and we do have some critical patients."

The first of the eight patients who died at the Rehabilitation Center at Hollywood Hills had a do-not-resuscitate clause and died Tuesday, police say. That person was taken to a funeral home. But after more deaths sparked new questions about conditions at the center, the body was claimed by the medical examiner.

Police have released a list of the patients who died:

"The suspicion is that these deaths should not have occurred," NPR's Jon Hamilton reported from the scene Wednesday. He added: "As of Tuesday, [the facility] was reporting that everything was OK, that it was using portable air conditioners and fans."

"In compliance with state regulations, the Center did have a generator on standby in the event it would be needed to power life safety systems. The Center also had seven days of food, water, ice and other supplies, including gas for the generator."

Detailing the problems identified this week by the Agency for Health Care Administration, member station WLRN reports, "In its complaint, the healthcare agency said that on Sept. 10 the rehab center 'became aware that its air conditioning equipment had ceased to operate effectively.' ... But between 1:30 a.m. and 5 a.m. Wednesday, 'several residents suffered respiratory arrest or cardiac distress,' the complaint said."

WLRN says the Rehabilitation Center had a history of poor performance in state regulators' inspections.

Scrutiny has also settled on the nursing home's owner, Dr. Jack Michel. The Sun-Sentinel reports that Michel "has history of fraud charges."

"Dr. Jack Michel in 2006 settled claims after he and five others were accused of agreeing to send patients to his Miami hospital, Larkin Community, for unnecessary treatment, according to the Department of Justice. Federal prosecutors said that Michel received kickbacks as part of the deal and that some of the patients came from assisted living facilities that he owned."

That 2006 case involved a $15.4 million settlement. Along with Michel, the Justice Department named Philip Esformes — whose name arose again last summer, when he was indicted after federal prosecutors accused him of leading "a complex and profitable health care fraud scheme that resulted in staggering losses — in excess of $1 billion."

With millions of people in Florida still lacking power, officials are urging those who need a break from the heat to visit cooling centers and drink water.

The city of Hollywood got a bit of good news on Thursday, as officials lifted a mandatory boil-water notice that had been instituted on Sunday. The move came after workers repaired three water main breaks.