Accessibility links
Hurricane Maria Update: Reports Indicate All Of Puerto Rico May Be Without Power : The Two-Way Hurricane Maria, the strongest hurricane to have hit the island in decades, is believed to have taken down critical high-voltage power lines. Gov. Ricardo Rosselló says repairs could take months. 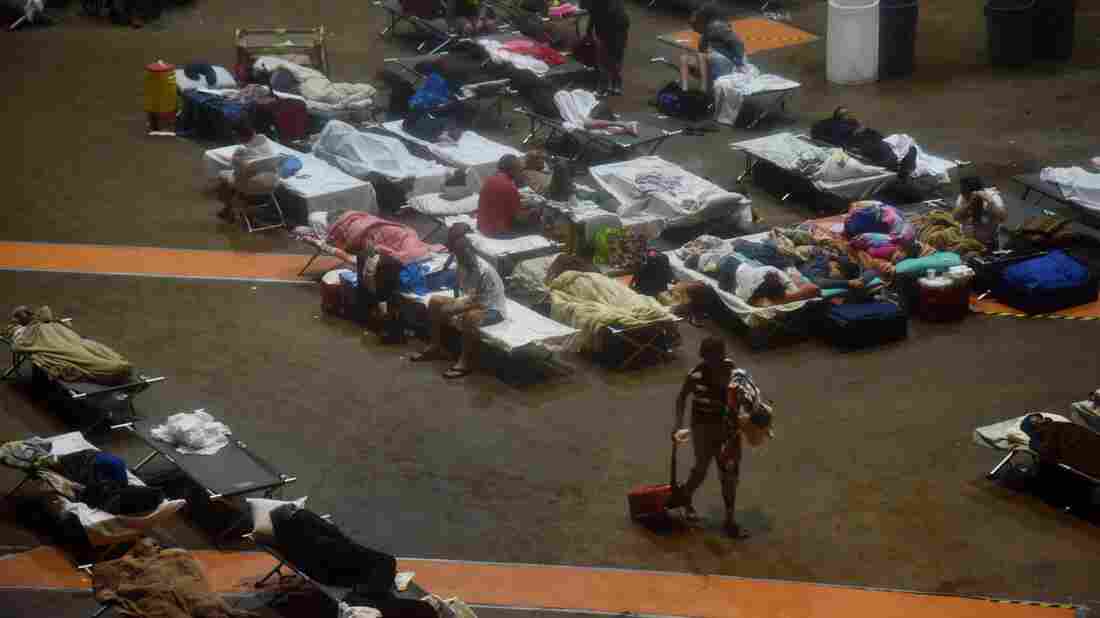 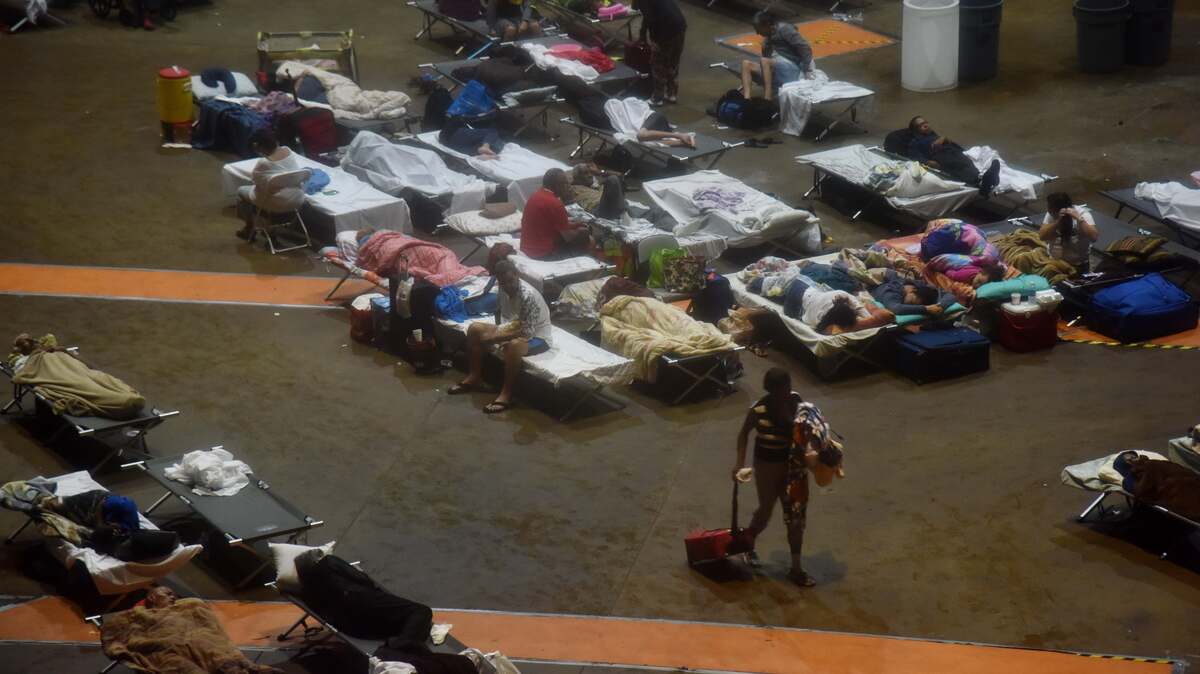 "Our telecommunications system is partially down," he said. "Our energy infrastructure is completely down."

Rosselló said that the island's energy infrastructure is "a little bit old, mishandled and weak," and towers carrying high-voltage lines may have been toppled by the storm. The National Guard will assess the lines from the air once conditions are safer, he said.

Puerto Rico governor: It will take "months as opposed to weeks or days" to restore power to island https://t.co/jQZZ8BGrNx

The head of Puerto Rico's emergency management agency said such damage would leave the entire island without power.

"When we can get outside, we will find our island destroyed," Abner Gómez of the emergency management agency said at a news conference Wednesday. "The information we received is not encouraging. It's a system that has destroyed everything it has had in its wake."

There had been one death reported so far — a man who was struck by a flying board, Rosselló said.

On Wednesday afternoon, on Twitter, Rosselló ordered a mandatory curfew from 6 p.m. to 6 a.m. until Saturday morning.

Only health care workers, emergency officials, police, journalists and citizens who are dealing with an emergency situation are exempted, he said.

Tell Us Your Maria Story

After devastating parts of the Caribbean, Hurricane Maria made landfall in Puerto Rico early Wednesday as a Category 4 storm packing powerful sustained winds of 155 mph, according to the hurricane center.

It is the strongest storm to have hit the U.S. territory in decades.

But as the storm moved offshore, it weakened to a Category 2 hurricane with maximum sustained winds of 110 mph, according to the 11 p.m. advisory issued by the National Hurricane Center. Maria is 55 miles northeast of Punta Cana, Dominican Republic.

In its 2 a.m. advisory, the hurricane center reported that Maria had regained major hurricane status as it neared the Dominican Republic. It is again a Category 3 hurricane. Torrential rain continues to pound Puerto Rico.

Maria came ashore at 6:15 a.m. ET near the eastern municipality of Yabucoa. As the eye moved offshore in the afternoon, Maria lost some of its punch and was initially downgraded to a Category 3 storm on the Saffir-Simpson wind scale, with sustained winds near 115 mph.

"[The] core of Hurricane Maria will continue to move away from Puerto Rico during the next several hours, and then pass offshore of the northeastern coast of the Dominican Republic early Thursday, according to the 11 p.m. advisory. "Maria should then move near the Turks and Caicos Islands and the southeastern Bahamas Thursday night and Friday." 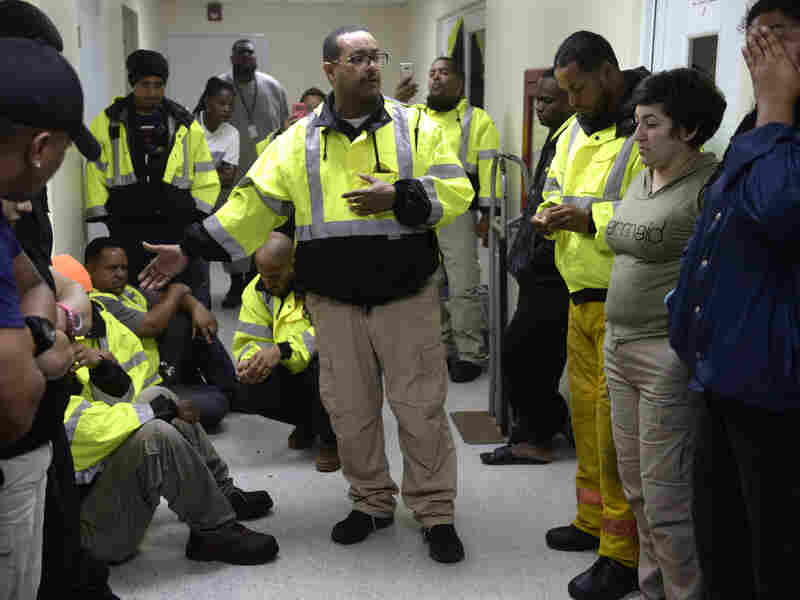 A rescue team waits to assist in the aftermath of Hurricane Maria in Humacao, Puerto Rico, on Wednesday. Carlos Giusti/AP hide caption 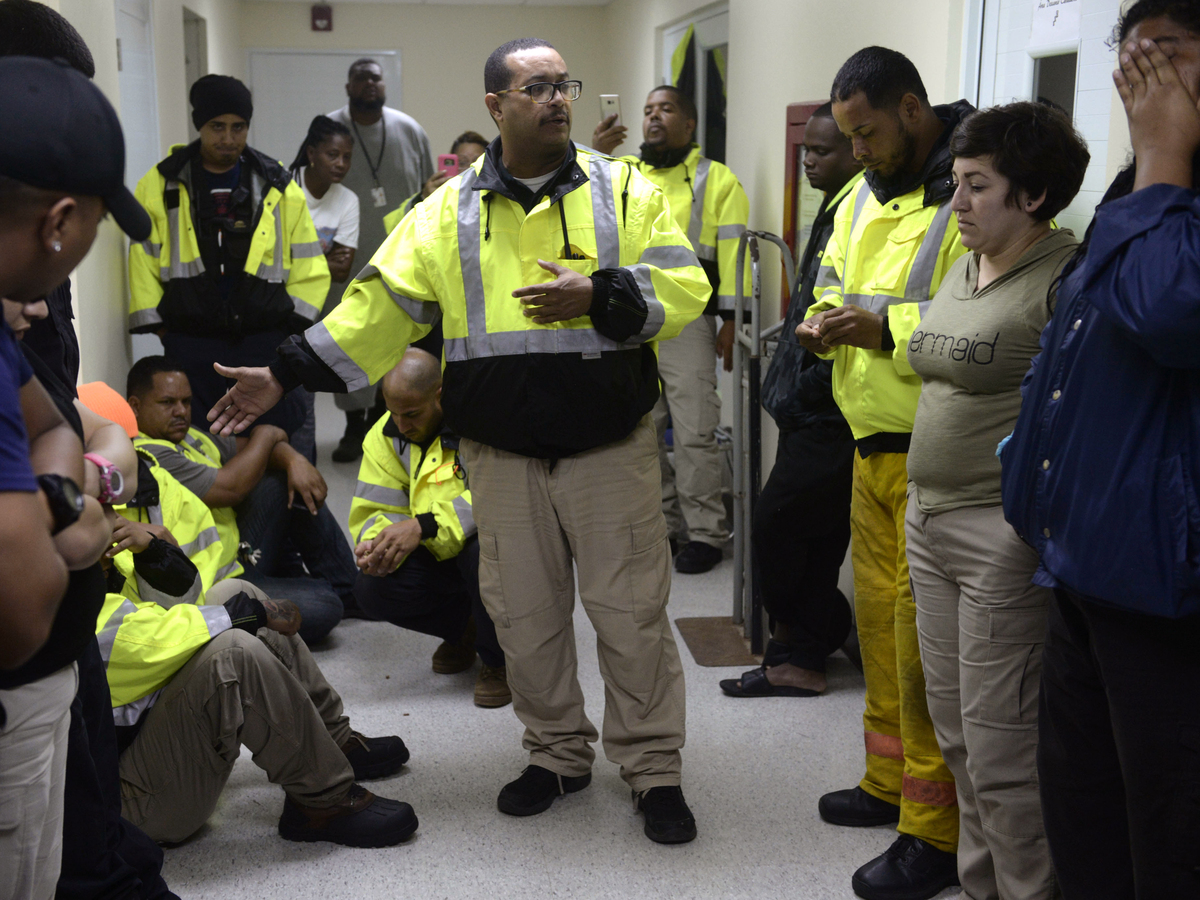 A rescue team waits to assist in the aftermath of Hurricane Maria in Humacao, Puerto Rico, on Wednesday.

The advisory says Maria is moving toward the northwest at about 9 mph "and this general motion with a decrease in forward speed is expected through Thursday night. A turn toward the north-northwest is forecast on Friday."

Widespread flooding was reported across Puerto Rico, according to The Associated Press, in addition to damage from the punishing winds that ripped doors off hinges and sent roofs airborne.

"One of the shelters in San Juan had to relocate refugees to the hallways because of the roof — it was shaking due to the winds," Santiago said.

The last Category 4 hurricane to make landfall in Puerto Rico was in 1932. Two weeks ago, Puerto Rico avoided the worst of Irma, which went on to strike Florida.

In the days before Maria hit the island, Puerto Ricans were urged to heed hurricane warnings and evacuation orders.

"We expect severe devastation," Rosselló told NPR on Tuesday. "We have about 500 shelters. People have been trickling into those shelters. But really, we have some weak infrastructure in terms of some of the homes that we have in Puerto Rico." 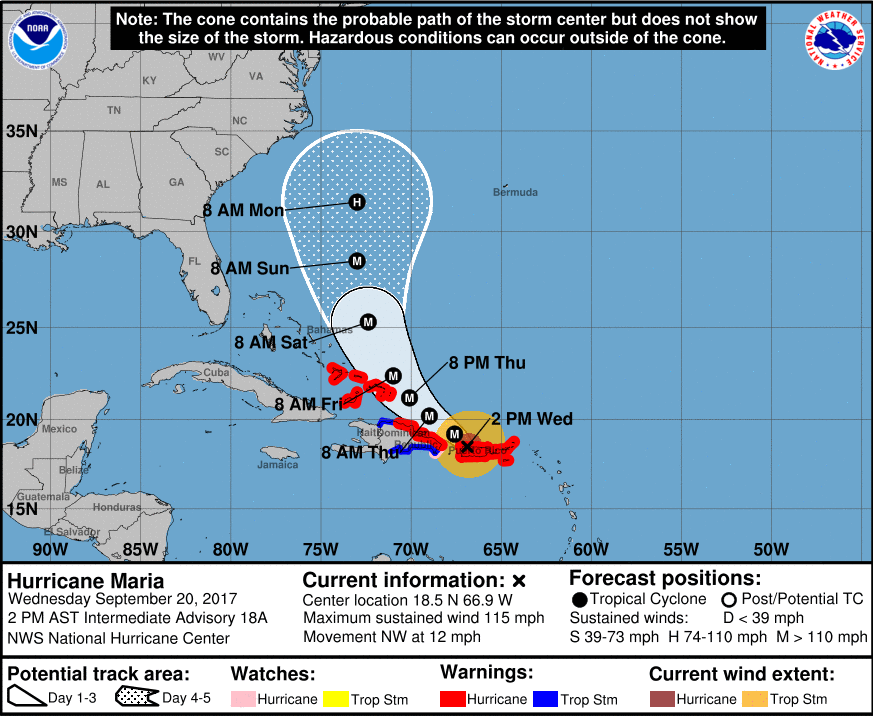 By Wednesday morning, more than 11,000 people on the island had gone to shelters to wait out Maria, the governor tweeted.

As the storm hit, Rosselló said on Twitter that "God is with us; we are stronger than any hurricane. Together we're going to get up." He said he has asked President Trump to declare Puerto Rico a disaster zone, which would clear the way to federal aid, according to AP.

Elie Finegold of Dallas was riding out the storm at a San Juan hotel. On Wednesday, he said on Facebook: "The tops of all the palms are gone, many other trees and traffic poles are down, roofs are torn off, and the city remains completely hunkered down waiting for the next round."

Finegold told NPR that he came to the island to be with a friend who had his leg amputated. "Nobody should go through that alone." He said his friend's hospital room "has significant water on the floor and still has no air conditioning (it is hot and humid here)."

Elsewhere in the Caribbean, the eye of the storm passed within 20 miles of St. Croix in the U.S. Virgin Islands early Wednesday morning, according to the NHC.

Gov. Kenneth Mapp warned residents to remain cautious as strong winds continued to lash the island. "Don't be asleep. It's okay to rest, but be vigilant and aware of what's going on around your property," Mapp said, according to The Miami Herald.

Nykole Tyson, director of public relations for the U.S. Virgin Islands Department of Health, spoke to NPR from her office on St. Croix. "We could feel the building shake," she said. "It was very, very frightening to put it lightly." She described downed trees, blown-off roofs and widespread flooding. 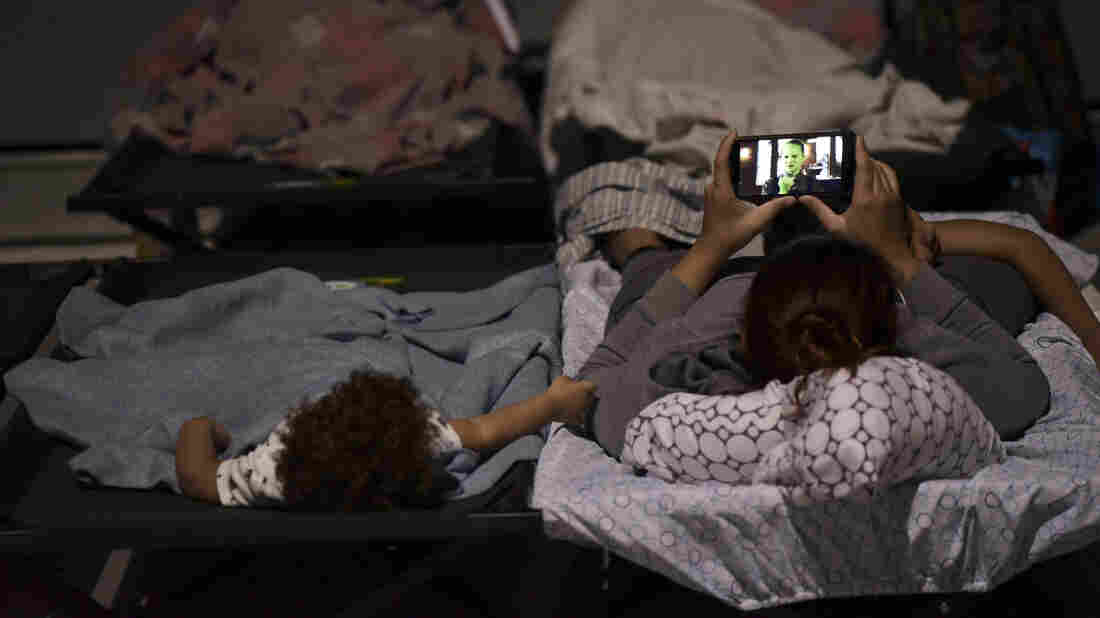 A woman and a child wait out Hurricane Maria at Humacao Arena in eastern Puerto Rico. By Wednesday morning, more than 11,000 people on the island had gone to shelters, the governor said. Carlos Giusti/AP hide caption 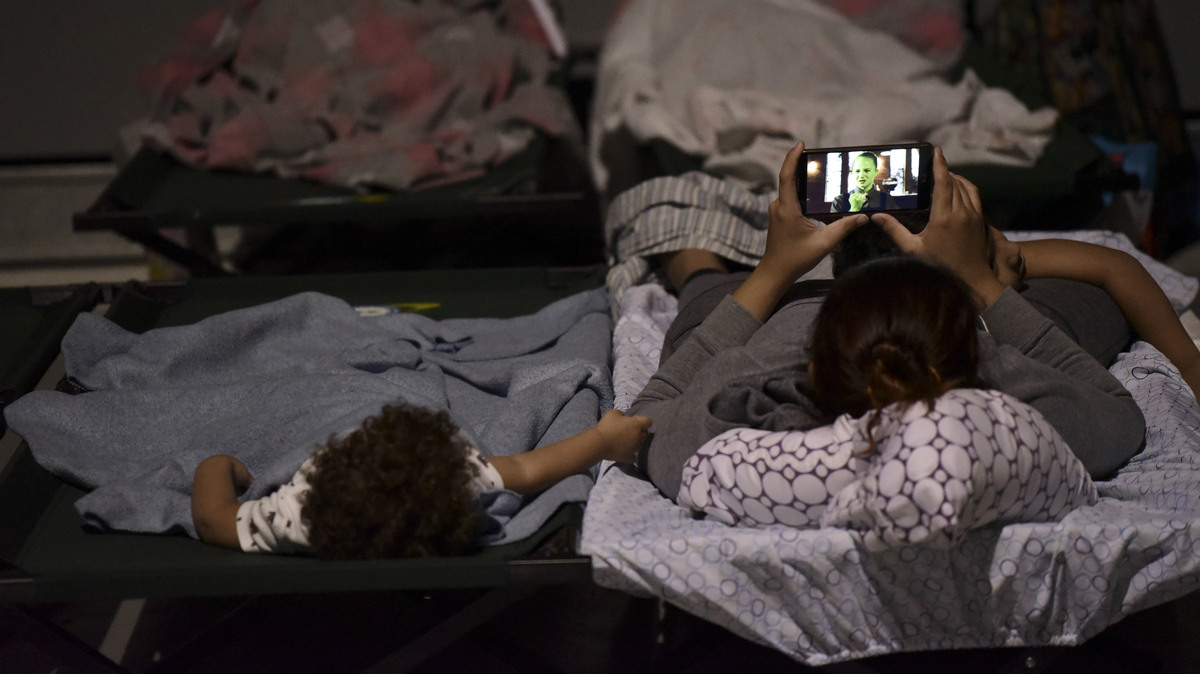 A woman and a child wait out Hurricane Maria at Humacao Arena in eastern Puerto Rico. By Wednesday morning, more than 11,000 people on the island had gone to shelters, the governor said.

When Hurricane Irma devastated St. Thomas earlier this month, its hospital was evacuated and "some patients went to Puerto Rico and some went to St. Croix," Tyson said. Now those patients are experiencing the unwelcome déjà vu of a second major storm in as many weeks. That includes one Irma evacuee, now on St. Croix with her newborn, who cannot return home to St. Thomas, Tyson said, "because there is nowhere for her to really go or be cared for."

Some hospital patients on St. Croix had to be moved into the hallways on Wednesday "because of water coming through and flooding all in different rooms," Tyson said.

Michelle Davis, health commissioner of the U.S. Virgin Islands, told NPR, "It's going to be a long recovery, but we have the total and full support of the federal government."

A picture of the damage Maria wreaked on neighboring St. Thomas, which experienced some of the worst of Irma's wrath, was beginning to emerge Wednesday. "I've seen more telephone poles down across driveways," Gene Brin, a U.S. Customs and Border Protection officer on St. Thomas, told NPR. "Since the ground was already saturated because of Irma ... it has magnified the flooding."

As the storm moved across the Caribbean, it blew over the tiny island of Dominica late Monday. An adviser to Prime Minister Roosevelt Skerrit says the storm killed at least seven people there, according to the AP.

Skerrit took to social media as the storm hit, posting multiple times about the devastation. He wrote in one entry, "My roof is gone. I am at the complete mercy of the hurricane. House is flooding."

He later said he had been rescued. In his last Facebook post, in the early hours of Tuesday, he said: "Initial reports are of widespread devastation. So far we have lost all what money can buy and replace. ... My focus now is in rescuing the trapped and securing medical assistance for the injured.

At least two people also were killed on the island of Guadeloupe as Maria moved northwest through the Caribbean, the AP reports. Two others aboard a boat were reported missing off La Desirade island, officials told the news agency.

A previous version of this story misspelled Elie Finegold's last name as Feingold. Additionally, we incorrectly referred to WRTU as an NPR member station. It was a member station in the past but is not currently.