Accessibility links
Shellfish Surprise: Common 'Herbivore' Dinosaur Found To Snack On Crustaceans : The Two-Way "I immediately said, 'Oh, no, no, it can't be crustaceans.' That was my knee jerk reaction," a paleontologist said. The prehistoric snacking was likely intentional and linked to mating behaviors. 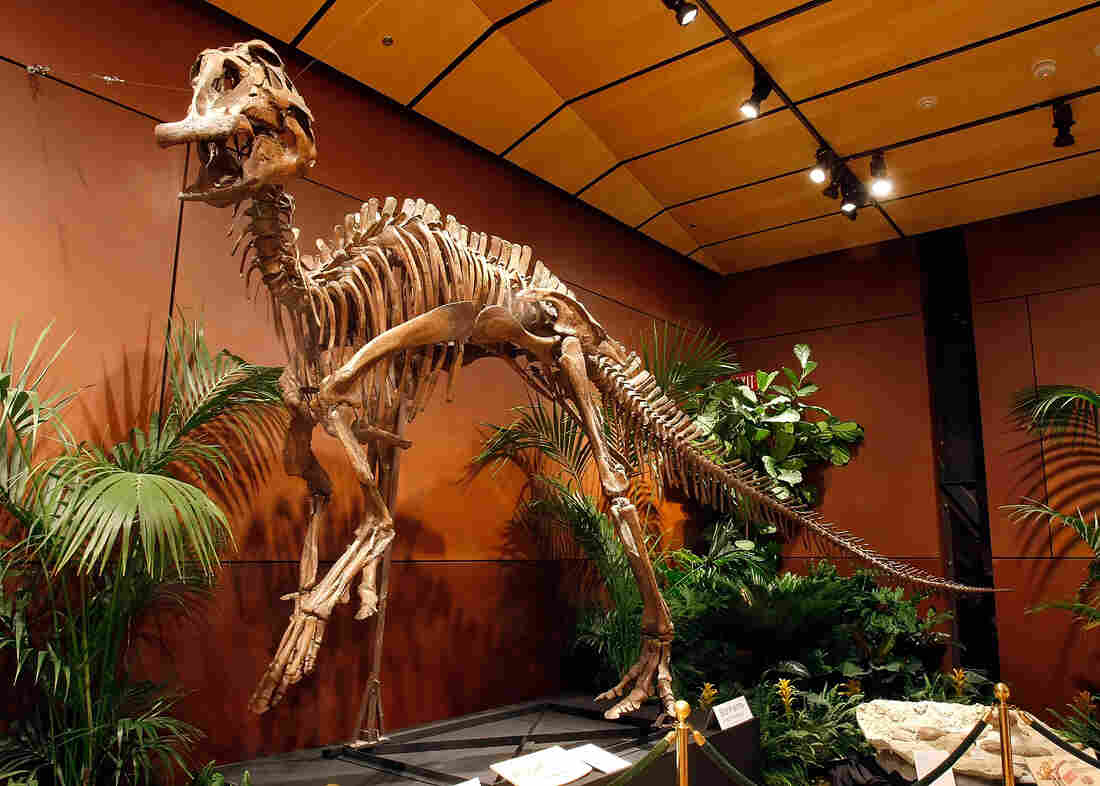 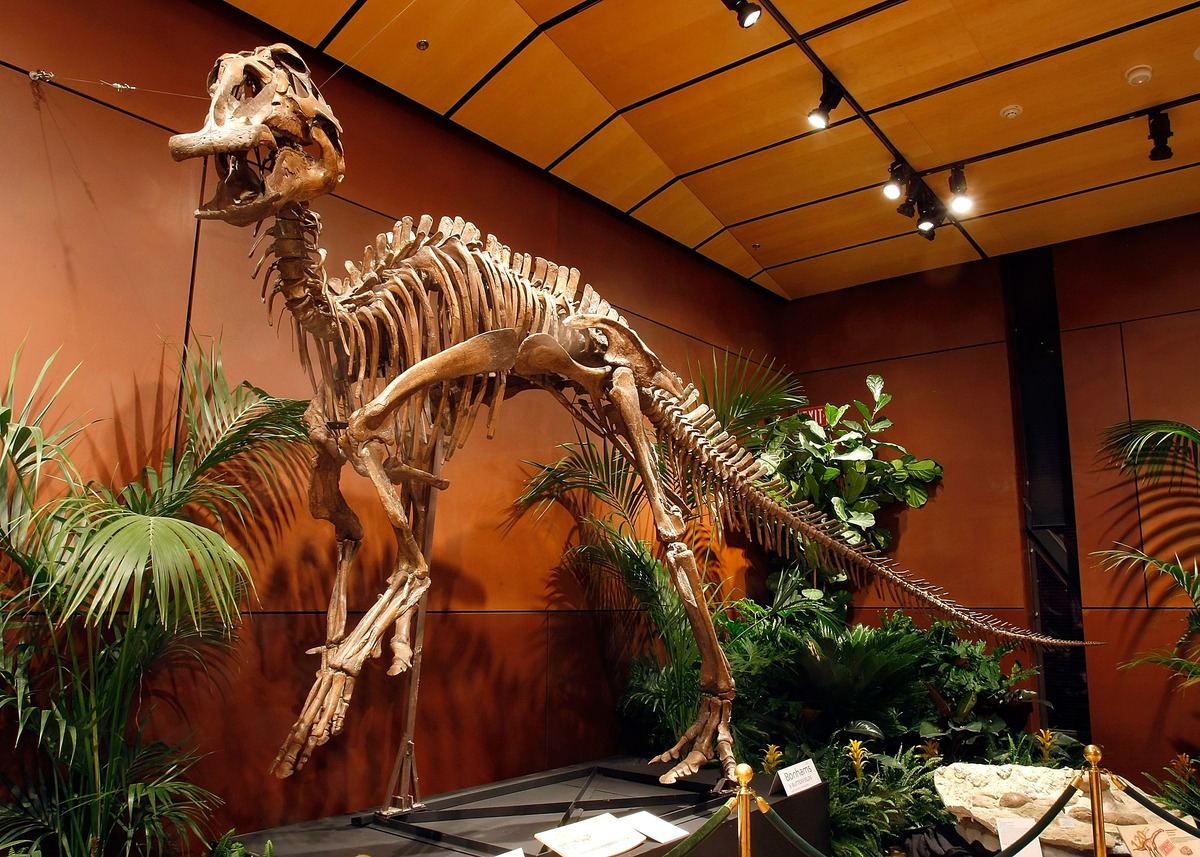 A duck-billed dinosaur skeleton, which the researchers think ate crustaceans, on display in 2009 at the Venetian Resort Hotel Casino in Las Vegas, Nevada.

Hadrosaurs, a kind of duck-billed dinosaur, are among the most common herbivores of the Cretaceous period. But new research suggests that actually, these animals also chowed down on crustaceans. The prehistoric snacking was likely intentional and linked to mating behaviors.

"I immediately said, 'Oh, no, no, it can't be crustaceans.' That was my knee jerk reaction," Karen Chin tells The Two-Way. She's the curator of paleontology at University of Colorado Boulder's Museum of Natural History and a co-author of the paper published today in Scientific Reports.

"I was very surprised but I think it reminds us that there's a lot we just don't know about the behavior of ancient animals," she said.

The samples also contain bits of decaying wood, which suggests that the crustaceans likely lived within rotting logs. There are a few reasons why Chin thinks the crustacean snacking was not accidental, simply stowed away on a bite of rotten wood.

First, crustaceans were found in at least 10 out of 15 deposits studied, spread over a 20-kilometer area and potentially over hundreds of years. "This was definitely a recurring diet," she says. 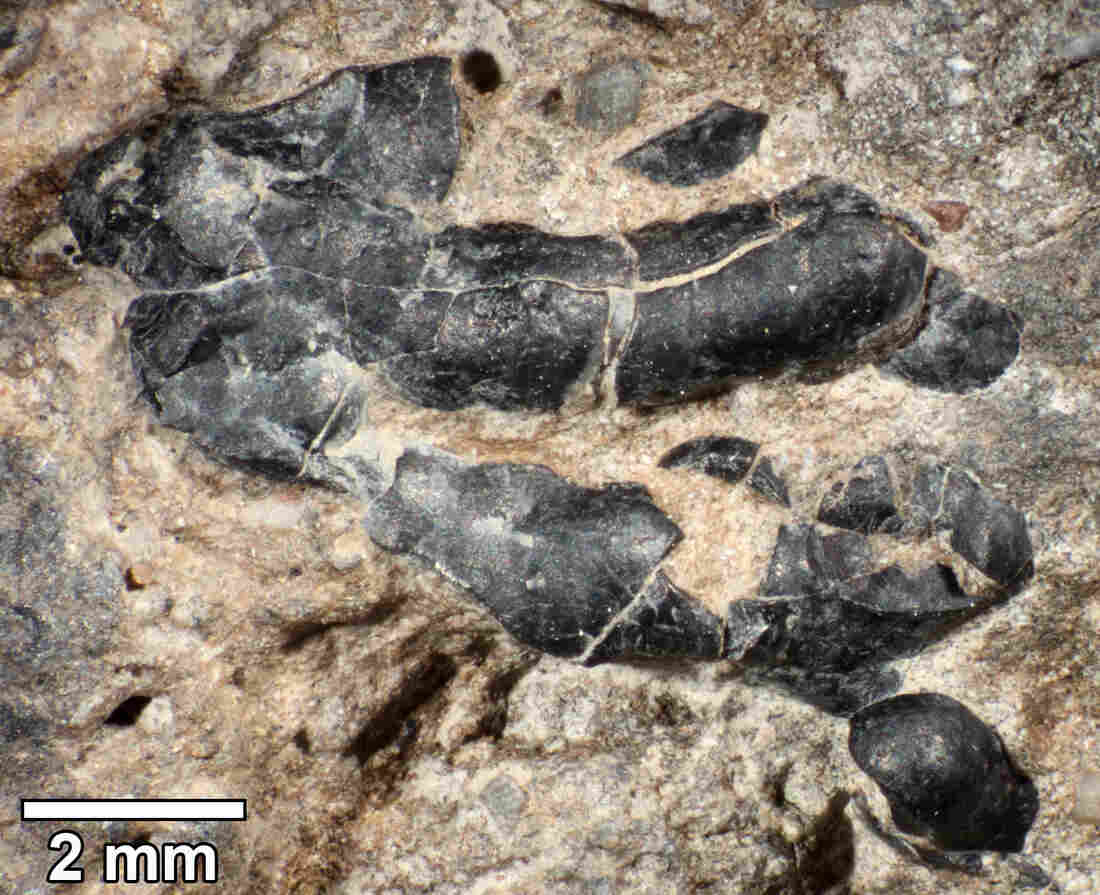 Second, "they were pretty good-sized crustaceans," Chin says, with an estimated length of at least five centimeters. "The fact that these crustaceans were a fair percentage of the width of the skull of the dinosaurs [means] they would have had a choice to reject it if it wasn't either a desired or acceptable food source."

In fact, Chin proposes that eating crustaceans was why these animals ate rotting logs in the first place.

They were likely seeking some extra protein during breeding season, she says, "because when animals lay eggs they need elevated levels of protein and calcium in order to shell their eggs and provision the yolks for their embryos. And they need it pretty rapidly."

And a log would provide a predictable source of animal protein. After all, "you can't imagine them running after a butterfly to get protein," Chin adds.

When it was not mating season, Chin believes that they ate foliage, the kind of diet we normally envision for these large (mostly) herbivores.

What's more, she thinks that this kind of feeding behavior could be present in other ornithischians – such as triceratops and stegosaurus – as well as large sauropods like brontosaurus.

"All of these dinosaurs laid eggs," Chin says, "and so we have to consider the fact that they might have also have had to increase their protein intake."

Some modern birds that are mostly herbivores start eating more protein before breeding for the same reason.

This finding seems to challenge the image of large herbivores found in cartoons or movies — slowly lumbering between leafy trees and chomping on foliage.