Accessibility links
With Power Out And Phones Down, A Struggle To Reach Loved Ones In Puerto Rico : The Two-Way Two days after Hurricane Maria thrashed the island, most of Puerto Rico's cellular sites are down — along with the entire power grid — making it difficult to check on people there. 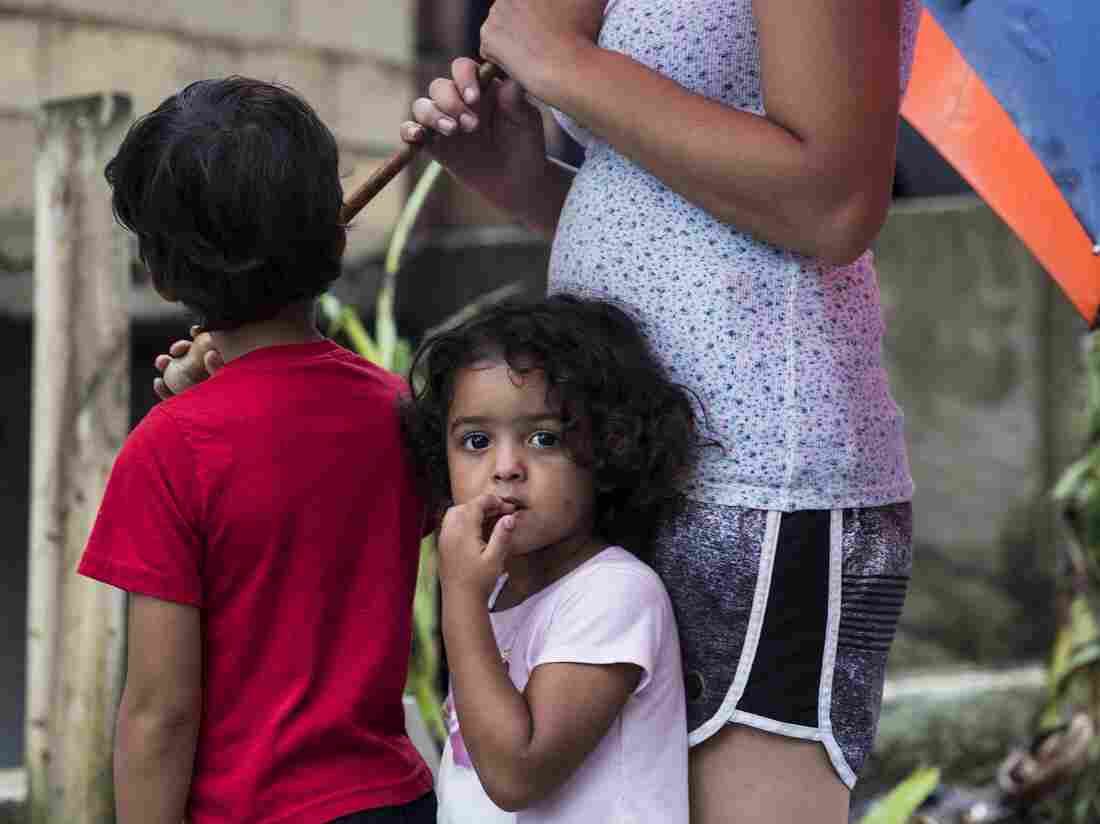 Three-year-old Deyanery Ramirez is in the La Perla neighborhood of San Juan, Puerto Rico, on Thursday. Without cell service on the island, it has been difficult for people to check on their loved ones. Alex Wroblewski/Getty Images hide caption 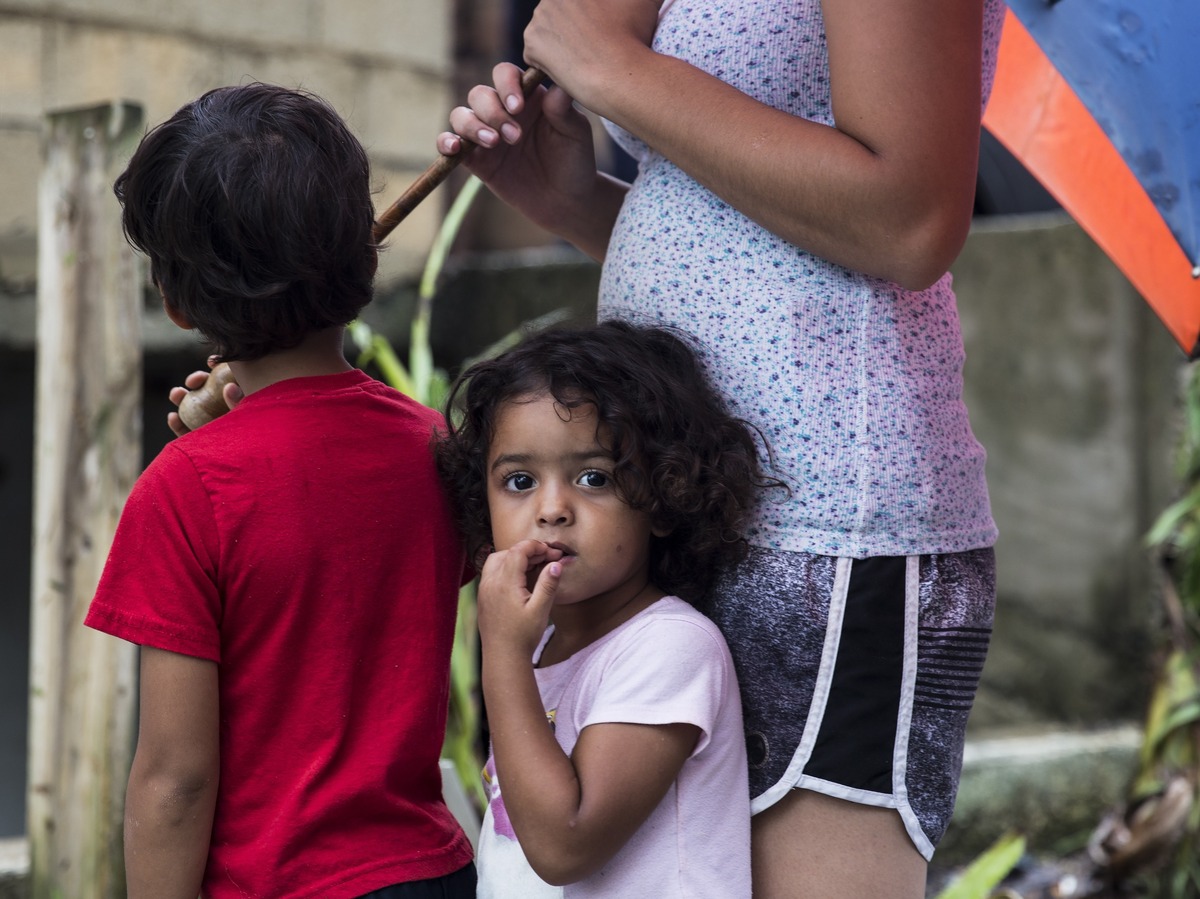 Three-year-old Deyanery Ramirez is in the La Perla neighborhood of San Juan, Puerto Rico, on Thursday. Without cell service on the island, it has been difficult for people to check on their loved ones.

Compounding Puerto Rico's devastation in the wake of Hurricane Maria is the fact that so much is still unknown. Because most of the island's cellphone sites are out of service and the power grid is down, it has been difficult or impossible to connect with the people who live there — whether from the mainland or from another part of the island.

Atlanta resident Silkia Babilonia, who lives in Atlanta, says that since the storm, she hasn't been able to reach friends and family on the island's west side.

"I tried to call every single number have for them, cellphone and landlines, but nothing," Babilonia, who was born and raised in Mayaguez, Puerto Rico, before moving to the mainland five years ago, told NPR. "We're trying to stay calm, pray and hope everything is alright."

Calling family in the San Juan area has been easier, Babilonia said. "My husband can talk to his family nearly every day, and they're doing OK. They're safe."

Puerto Rican officials say at least six people are confirmed dead on the island in connection with the storm, The Associated Press reports. The death toll across the Caribbean was 27 as of Friday afternoon, with at least 15 deaths on Dominica.

The Federal Communications Commission reported Thursday that 95.2 percent of all cellular telephone sites in Puerto Rico were out of service. (In the U.S. Virgin Islands, meanwhile, 76.6 percent of cell sites are down.)

It's not just the cellular networks that aren't working: The FCC says it has received reports that "large percentages of consumers are without either cable services or wireline services."

Some people were able to connect using Internet-based tools. Julio Cerón, who lives in Silver Spring, Md., said he reached family members in the northeastern region of Canovanas by calling via Messenger, a service from Facebook, "which we couldn't have done a couple of years ago," he told NPR.

But if you can't get on the Internet, services like Messenger are no help.

Dyn Research posted charts of Internet traffic in Puerto Rico, which dropped precipitously on Wednesday as power and Internet connections there failed.

Vanessa Calderón-Rosado, who works in Boston, told NPR member station WBUR on Thursday that it took her days and dozens of tries to reach her 87-year-old father on a landline.

"He's doing good. So that's great. When we were able to connect today, our calls dropped and then we weren't able to reconnect," she said. "But at least we were able to talk long enough to know that he's fine and to have a good conversation. So it is very erratic right now. It's very choppy. There's no consistent way of communicating."

Supreme Court Justice Sonia Sotomayor said she, too, was struggling to reach family members in the west coast area of Mayaguez.

"The island is suffering a great tragedy right now," she said, according to CNN. "Myself personally and the rest of my family, we are exceedingly concerned. We ask for your prayers."

On a Hurricane Maria page on its USA.gov website, the federal government offered suggestions to people trying to connect with loved ones in Puerto Rico, including an email address (maria1@prfaa.pr.gov) and phone number (202-800-3133) to call the Puerto Rico Federal Affairs Administration. Though the site cautioned: "They are experiencing high email volume, please do not send more than one email unless the situation of your loved one has changed."

Its other suggestions include a registry run by the Red Cross and one rather low-tech option: calling into Puerto Rican radio station WIPR.

A small handful of radio stations managed to keep broadcasting through the storm and have worked to relay messages about loved ones who couldn't be reached by phone or Internet.

Silkia Babilonia says she knows what it's like to be out of touch: She was on the island in 1998 during Hurricane Georges and its aftermath, when phone service was lost for months.

"From my side now," she says of trying to reach people, "you feel a bit anxious about it."

"But on the other side, being the person living through the situation, you want to tell everybody else that you're doing good, but you're not able to. It just doesn't feel right."

Do you have a Maria story? Tell us here.